If literacy is a right, who pays bill, judge asks in Detroit schools suit

Talent & Education
If literacy is a right, who pays bill, judge asks in Detroit schools suit

CINCINNATI — They came by bus and plane to a small courtroom in southern Ohio, most hoping a three-judge panel would do something big –  rule that access to literacy through better schools is a fundamental right protected by the U.S. Constitution.

But though two judges, both appointed by Democrat presidents, appeared sympathetic, one asked the question that worries Michigan leaders: How much would it cost to fix the Detroit schools?

“What do you want us to do in that regard?” asked Judge Eric Clay of the U.S. Sixth Circuit Court of Appeals, almost perplexed. “Where would the money come from?”

Plaintiffs argue that Michigan, which controlled the Detroit district for years, allowed it to deteriorate so badly that there weren’t enough books, teachers and furniture, creating an atmosphere where learning to read was near impossible.

Putting a dollar sign on any sweeping remedy, argued plaintiffs attorney Carter Phillips, was premature; the case hadn’t even gotten to trial before U.S. District Judge Stephen J. Murphy III dismissed the case and its argument that access to literacy was a fundamental right.

“Grant them that right and there will be many hours devoted to what that remedy is,” Phillips said. He said the best remedy could be crafted later, after the case proceeds through additional phases.

The exchange was one of several during the lightning fast, question-and-answer hour during which the three judges peppered Phillips and Ray Howd, attorney representing the state of Michigan.

How the judges rule could have a sweeping impact not only in Detroit but nationwide: Though the U.S. Supreme Court has ruled on similar cases over the years, it has specifically avoided a definitive ruling on whether citizens have a Constitution-protected right to an education.

The Detroit case has drawn nationwide attention from scholars, activists and economists who see the potential of a case that could expand the universe of rights.

Advocates for the students were cautiously optimistic following the hearing.

“We were really pleased with the questions from the three judges,” said Mark Rosenbaum, one of the civil rights attorneys who brought the case against the state of Michigan and the state board of education.

The case has drawn national and local attention, with more than 100 people from Detroit in two buses arriving at the courtroom. Leaving from the city at 3 a.m., they carried signs outside the courtroom reading “Keep Open and Rebuild Our Schools.”

For all that was at stake – an emotional debate educational equity, race and state control of a minority district –  the arguments inside the courthouse lasted just one hour and were well mannered and academic.

The appeal will be decided by two judges appointed by Democratic presidents and one by a Republican, following last year’s dismissal of the case by Murphy. He was appointed by former President George W. Bush.

The lawsuit claims the state grossly underfunded Detroit schools that they were schools “in name only.” Murphy was sympathetic to the arguments, but dismissed the case, ruling there is no constitutional right to literacy, citing educational cases that went to the U.S. Supreme Court in the 1970s and 1980s.

Rosenbaum and the plaintiffs hope that subsequent legal cases, including the one from 2015 that legalized same-sex marriages, would expand the court’s view of education as a fundamental right and return the case to Murphy for a possible trial.

Of all the cases he has seen, Rosenbaum said the Detroit case, and the conditions in the Detroit schools, was the “most egregious” in the nation. They found that some classes had just five books for 28 students, chairs for 37 in classes of over 50, and not enough teachers, forcing students to watch movies or educate themselves.

As Phillips, the lead attorney for the plaintiffs told the three-judge panel, “you had eighth-graders teaching eighth-graders” in the district. 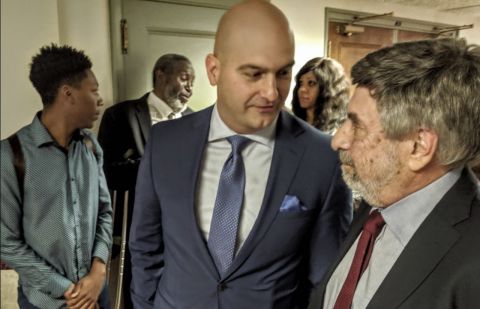 “When you hear the arguments on both sides it just reminds you how the school district was deteriorated and how many children were lost in the process,  from an educational point of view, from a literacy point of view, from a civil rights point of view,” said Detroit Public Schools Community District superintendent Nikolai Vitti, who attended the hearing.

Vitti said the district is improving and some of the horrific conditions have been remedied since the lawsuit was filed in 2016. Students have textbooks, teacher pay has improved and fewer subs are leading classes. But much work has to be done; the district needs an estimated $500 million in repairs to its buildings –  money does not have, Vitti said.

“We just have to get this right moving forward,” Vitti said.

The judges peppered the lawyers with questions, asking how this case differed from prior ones in a timed format where each side got just 15 minutes to speak. Attorneys for the students and the state both came in for hard questions.

After Howd, an assistant Michigan attorney general, pointed out that the state didn’t always control the Detroit schools and that it no longer does following a 2016 restructuring, Judge Stranch pointedly disagreed with his reasoning.

Stranch told Howd she was “struggling” to understand his argument that this district’s ills from years ago were no longer its responsibility. “They (the state) enabled that activity to go on,” she said.

And after Howd alluded to the impact that poverty can have on learning during an exchange identifying who was to blame for poor performance, Stranch interjected that those students from disadvantaged backgrounds were the ones who most need adequate support.

The exchanges with Stranch pleased Rosenbaum and his team.

But it’s hard to speculate how an appellate court will rule based on oral arguments because they had difficult questions for all sides.

Howd did not comment afterward and the Michigan Attorney General’s Office said it does not comment on pending litigation. 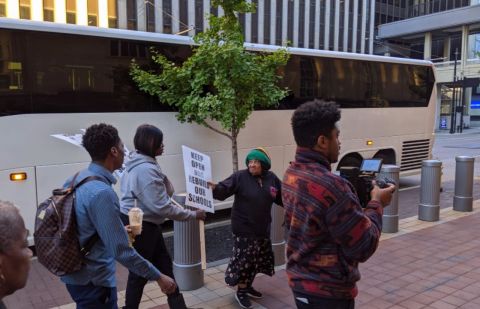 Should the plaintiffs prevail, it could open the door to similar suits across the country. Murphy, the Trump appointee, asked Phillips whether the question was already “settled” by a Texas case from 1973 that upheld that state’s laws on school funding that lead to disparate funding.

Phillips said it did not and pointed to a new vein of legal thought expanded by the same-sex marriage case: that by denying the right to marry, the government was “stigmatizing” same-sex couples.

By not providing the necessary environment that would allow students to become literate, the government was doing the same to them, Phillips said.

“We are saying you are now stigmatized for all time... because you were not put into a position to read,” Phillips said.

Afterward, one of the plaintiffs felt relief as he stood on the steps of the federal courthouse in Cincinnati.

Jamarria Hall, 19, graduated from Osborn High School, one of the four schools that existed in deplorable conditions, according to the lawsuit. He came to the courthouse after flying from Florida, where he’s attending college, and taking a bus from Detroit.

Hall finished second in his class at Osborn High School and had the best SAT score in his class, he said. But that wasn’t good enough to get into the colleges he wanted and when he got to Tallahassee Community College, he had to take remedial classes “for things I should have learned in third or fourth grade,” he said.

In flooded Michigan neighborhoods, who should pay for sea walls?