That drop could happen sooner if state lawmakers repeal a law prohibiting schools from opening before Labor Day unless they hold public hearings and get permission from the state Department of Education.

The House Education Committee recently advanced a bill to repeal the tourism-industry driven 2005 law. The committee voted 9-2 at the hearing Oct. 5.

The perennial debate pits education leaders who want to build more flexibility into their school year calendar against tourism and economic development interests eager to protect summer profits by ensuring families can book vacations through the Labor Day holiday.

It isn’t hard for districts to get waivers to begin classes in August. The Education Department typically works with districts to help them meet criteria for approval, said department spokesman Bill DiSessa. Waivers are good for three years.

Intermediate school waivers allow any district within the ISD’s service area to start before Labor Day.

But school districts need more predictability than a temporary waiver provides, said Don Wotruba, executive director of the Michigan Association of School Boards. They don’t feel confident investing in plans to extend the school year if they have to get permission again every three years, he said.

Tourism leaders like the waiver process because they believe the administrative hassle deters some districts from applying.

But education advocates say they shouldn’t have to apply in the first place.

“We believe districts should have the flexibility on their own without the Department of Education deciding yes or no,” Wotruba said. “Districts need the flexibility to decide what makes sense for them.”

Another reason is that many school activities — such as football and other fall sports — begin practice in early August, leaving many families already unable to travel as Labor Day approaches, said Hornberger, who leads the House Education Committee.

School start dates vary throughout the country. Just 22 percent of districts across the U.S. opened after Labor Day in 2019, according to a study by the Pew Research Center. Start dates that year ranged from July 23 in suburban Phoenix to Sept. 9 in Trenton, N.J.

Virginia had a law similar to Michigan’s but amended it in 2019 to allow schools to start in mid-August as long as they give students a four-day weekend for Labor Day. Michigan already prohibits schools from being in session on the Friday before Labor Day.

Districts just want flexibility to do what’s right for their communities, said Bob Kefgen, lobbyist for the Michigan Association of Secondary School Principals.

“Plenty of schools want to get started in August to minimize the potential summer learning loss and maximize the amount of learning time before breaks,” Kefgen said. Such concerns have multiplied since the coronavirus pandemic, which has disrupted in-school learning and left schools with enormous challenges in getting students caught up.

Opponents of the Hornberger bill say classrooms aren’t the only place to learn. They say kids learn a lot about history, geography and the environment in places like Northern Michigan that rely on tourist dollars.

“If your only goal is strict academic education and you don’t believe in the value of other forms of education, then you might support this, but I believe there’s” more to education than classroom learning, said Republican state Rep. John Damoose of Harbor Springs, who voted no in committee.

The only other no vote came from another Northern Michigan Republican, Jack O’Malley whose district includes Benzie, Leelanau, Manistee and Mason, four northwest counties that hug the beaches of Lake Michigan.

Earlier school starts could particularly harm businesses that rely on teenage employees through the summer, O’Malley said during a recent committee meeting.

Golden Shoes in Traverse City is among them, said owner Bill Golden, who has been especially reliant on teenagers through the pandemic when older workers were unwilling to work at the shoe store.

“It’s not just Traverse City,” Golden said. “It’s Holland. It’s Grand Haven. These are all tourist areas that really depend on those kids because we just don’t have enough workers.”

The Michigan Restaurant and Lodging Association is concerned about both the workforce and the customer base.

“Hospitality has been hit incredibly hard because of COVID, so the timing of this could not be worse,” the association’s lobbyist, John McNamara, said of the House bill.

Mackinac Island businesses like Mission Point Resort are open only six months a year. To chip away at the customer base during the height of tourist season would hurt, said Liz Ware, its vice president of sales and marketing. Seventy percent of hotel guests are from Michigan, so it’s important that families from other parts of the state are able to travel through Labor Day, she said

“The peak months of June, July and August are when we have to make enough money to have a successful year. Reducing that 90-day window because people are going back to school? That would hurt,” Ware said.

“This is a real existential threat to us in Northern Michigan,” she said. “The hospitality community supports so much of the economy in this region. We should be doing everything we can to support travel and tourism as opposed to making it harder.”

That sounds short-sighted to education advocates.

“Tourism is important but, at the same time, we don’t believe the education side should be sacrificed,” Wotruba said. “Districts need the permanent ability to make decisions that fit their communities.”

The bill now awaits action by the full House. A vote has not yet been scheduled. 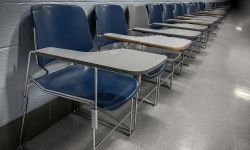