District and charter schools across Michigan have $6 billion in federal pandemic relief funds to spend — but some of their requested uses are not explicitly pandemic-related, according to a review of spending proposals submitted to the state.

Among the proposed projects submitted to the state: A playground ball pit, metal detectors and a nutrition room with smoothie service.

Schools have a lot of flexibility in using the influx of federal money – and just a few years to spend it. Proposed uses vary greatly among the more than 500 school districts and nearly 300 charter schools receiving funds, according to the review by the Detroit Free Press in collaboration with Chalkbeat Detroit and Bridge Michigan.

$6 billion. That’s how much Michigan schools are receiving from the federal government to help students and staff recover from the pandemic. But it isn’t entirely clear how this unprecedented amount of federal cash is being spent and whether it will have an impact.

Chalkbeat Detroit, Bridge Michigan and the Detroit Free Press are teaming up to find out where the money is going, who is benefitting and whether the money is helping students get back on track academically, emotionally and socially.

Please share your thoughts — and tips — by emailing education reporters Isabel Lohman of Bridge Michigan at ilohman@bridgemi.com, Koby Levin of Chalkbeat Detroit at klevin@chalkbeat.org or Lily Altavena of the Detroit Free Press at laltavena@freepress.com.

When asked about non-COVID related spending, district leaders said they believed spending on athletics and other similar categories fit under the broad umbrella of student wellbeing. Others said they were making infrastructural and building improvements they’ve already waited too long to make, thanks to years of inadequate state funding.

“School districts and school administrators, really, we're doing our due diligence to be responsible with taxpayer funding,” said Susan Tollefson, superintendent of L’Anse Area Schools in the Upper Peninsula.

Schools received three rounds of federal relief funding, starting in 2020 through the CARES act, with the last and biggest round of funding in the American Rescue Plan last year.

Congress did not attach many stipulations to the money, leaving schools quite a bit of discretion in spending. In signing off on the most significant and recent influx of cash in the American Rescue Plan, Biden said he hoped the funds would, in part, help schools reopen amid the pandemic. Congress stipulated that at least 20 percent of the third round of funds be used to combat learning loss sustained in the pandemic. Schools are also expected to meaningfully consult with stakeholders in their communities in developing spending plans, including students, families and educators.

The last round of money needs to be spent by 2024. Plans submitted to the state for spending the funds are preliminary and could change. The amount of money allocated to districts and schools depended on a few factors, including the number of students enrolled and the number of low-income students in a district. Districts with more low income students received more funding. 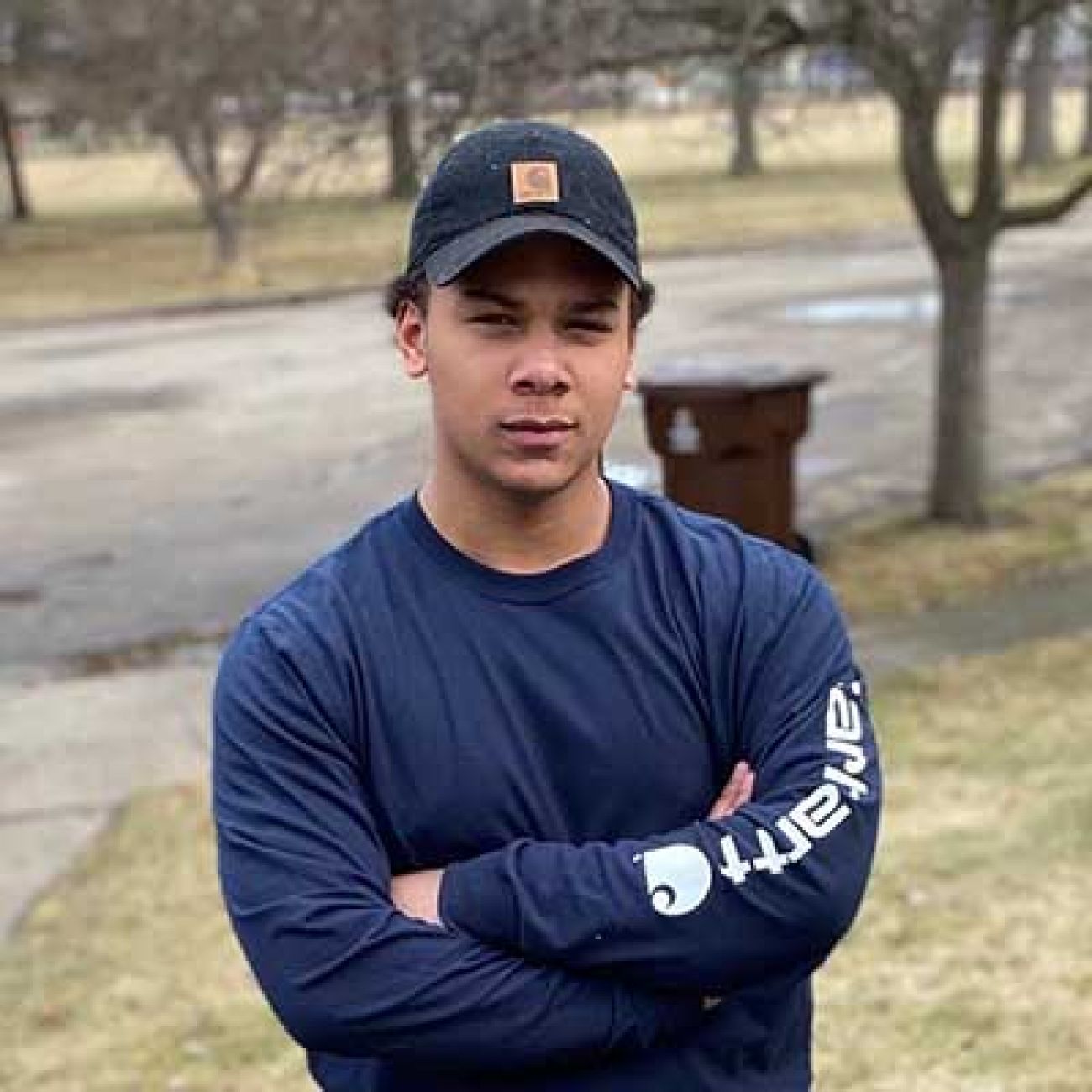 Kobe Rochester, 17, a student at Sexton High School, said the Lansing School District should use its federal funds on security and facility upgrades. (Courtesy photo)

Experts in school finance and administration caution that schools should strategize to spend carefully, and target investments toward helping students academically and mentally. But, they added, there may also be room for new playground equipment. Guidelines attached to the money are loosely written, allowing for schools to come up with creative ways to spend it.

“We've got to invest our dollars in the things we know work and do that in a way where we're making sure that those investments go to the students who need it the most,” said Karen Hawley Miles, president of Education Resource Strategies, a national nonprofit that assists schools with using resources wisely.

Some of the most common non-COVID related spending categories include security, athletics, playground equipment and infrastructural improvement such as new HVAC systems.

But what exactly is considered pandemic related is up for debate.

In their proposals to buy security equipment, some schools wrote they would use cameras for contact tracing. Hope Academy, a K-8 charter school in Detroit, for example, wrote in state records that interior and exterior cameras at the school “will be used to assist in the process of contact tracing (as needed) as well as to monitor the daily adherence to COVID-19 procedures and protocols at the school level.”

Hope Academy’s superintendent did not respond to an emailed request to explain the school’s contact tracing process.

Kalamazoo Public Schools sought to use some of its $60 million in federal funds for $134,000 in security equipment – three metal detectors estimated at $8,000 each and five X-ray machines at $22,000 each, but the state denied the request.

The River Rouge School District proposed at least $340,000 in athletics, playground and wellness spending out of roughly $16 million the district received. About $10,000 would go to a nutrition room to make smoothies, its plan said.

The room would “provide smoothies and other essential drinks to support the additional calories, carbohydrates, proteins, and a host of other essential nutrients for student athletes participating in rigorous after school athletic conditioning and programming.”

River Rouge proposed spending $120,000 to buy a food truck for a mobile culinary arts program for high school students and more than $200,000 on new playground equipment. The district did not respond to requests for interviews on its spending strategy, but wrote in the state documents that the playground equipment would benefit student wellbeing.

The state of Michigan initially denied the request for the nutrition room, but approved it after the plan was modified to benefit more students, Martin Ackley, spokesperson for the state Department of Education wrote in an email Monday morning.

"Just because a district puts together a proposal, doesn’t mean it has been approved. Staff at MDE follow the federal guidance with fidelity and work with local districts so their expenditures are allowable and reimbursable.," Ackley wrote in an email. "The spending of these funds will be monitored by MDE in accordance with federal guidelines. In the end, if districts misuse these funds on non-allowable projects, those funds will be subject to recapture by the Michigan Department of Education."

Spending on a playground, athletics or on building repairs might even fit into a district’s strategic plan to spend the money, said Hawley Miles, of the national nonprofit. Districts may have planned in the future to make those improvements, spreading out the expense over years. By spending the federal funds now, schools could be freeing up money later.

In that case, she said, “it could be responsible to spend money on a playground.”

Tollefson’s district, L’Anse Area Schools, planned to spend nearly $93,000 on installing new outdoor tennis courts. The superintendent contends the spending is COVID-related because it provides another option for student activities outdoors and addresses concerns parents have raised about students exercising indoors when face masks are required.

Tollefson added that the new courts aren’t just for tennis, but can be used for pickleball and other racket-related sports.

“Our plan was to hold P.E. classes outside as much as possible,” she said.

The decision to install them wasn't made in a vacuum, she said. Parents and teachers had input on the district’s plan to spend the $1.7 million it received, which also included plenty of COVID-related items, like thermometers and hand sanitizer.

Schools also have proposed spending hundreds of millions on building expenses that aren’t entirely pandemic-related. Detroit Public Schools Community District’s $700 million spending plan is a stark example. The district received $1.2 billion in federal funding and is relying on the majority of it, nearly $700 million, for building projects. 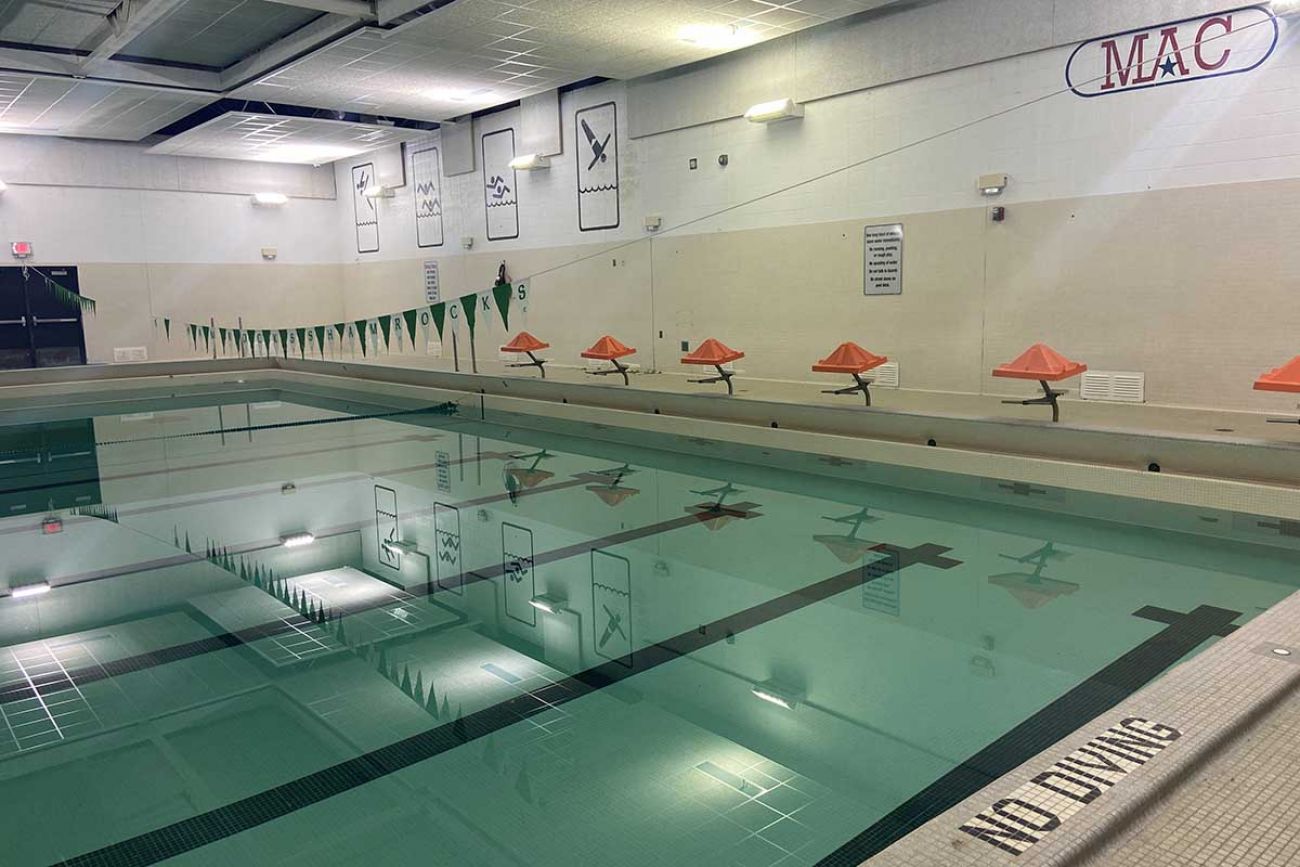 Eastpointe High School’s pool has not been used for years. A finance official said it would cost the district hundreds of thousands of dollars to get the pool functioning again, and would make more sense to spend $500,000 in federal funding to get rid of it to save on maintenance. (Photo by Lily Altavena)

The number of students attending Eastpointe High has declined dramatically since the high school was first built 100 years ago, he said. In the long-run, it’s cheaper to demolish the pool and make the school smaller.

“If we were able to reduce the footprint of that building, we would have more money to put into classrooms long term,” he said.

Building improvements might not necessarily be COVID-related, but Carlesso said the improvements will hopefully make the district “a place that people want to go to school.”

Similar to L’Anse, Alcona Community Schools, a small rural district in northeastern Michigan, has an “existing list of needs” for students and facilities. Superintendent Daniel O’Connor said the decision to replace 30-year-old playground equipment, at an estimated expense of roughly $200,000, balanced student needs in the pandemic, keeping them outside where it’s harder to transmit infection.

“We have $10 million, $20 million worth of needs that aren't all as dire as some of the others,” he said. “We tried to really look at student data to guide our decision-making process and trying to be responsive to their needs.”

Kobe Rochester, a senior at Sexton High School in Lansing, said his school’s needs feel self-evident. In a Facebook post in March, the 17-year-old wrote that Sexton’s bathrooms were a mess, missing soap for months on end and in desperate need for updates. He also believes his school needs more security.

“You'd think in the middle of COVID that soap in the bathroom would be a priority,” he wrote.

Robert Kolt, a spokesperson with Lansing Public Schools, wrote that an upcoming bond vote in May includes $10 million to make improvements to Sexton High facilities.

Rochester told the Free Press the bathrooms sometimes don’t have toilet paper. And, he said, it doesn’t appear like the district has poured any federal money into needs that he and other students have identified, like security.

Leading experts, however, have cautioned school leaders to not just focus on infrastructural or miscellaneous needs, but on academic and emotional well-being to help students truly recover from the devastating impacts of the pandemic. Early benchmark testing through last year showed more Michigan students fell behind in grade level in math and reading, with low-income and students of color faring worse.

The Council of the Great City Schools, a coalition of more than 70 public school districts across the United States, recommends having “a coherent, instructionally-focused, systemwide plan.”
The organization studied how districts used federal funding from 2009 following the Great Recession. The districts that used funding more effectively and saw better results had coherent strategies for improving academics districtwide.

Hawley Miles said districts should be leveraging research-based practices, like high-dosage tutoring where students receive tutoring one-on-one or in small groups several times a week, as a part of those plans – and they should be capturing data, like results of routine student testing, to gauge the success of those interventions.

In some cases, she said, districts across the country struggle to spend some of the funding on tutoring and hiring other employees for instruction because of the current competitive job market.

“We're working in a place where they expected to spend $50 million on tutoring, and it was a big district, but they could only spend five,” she said.

But generally, catching up struggling students should drive district decisions, she said.

“Do they have the plans for how they're going to assess what students know and where they need help to catch up? Do they have extra time for tutoring students?” she asked.

Editor's note: This story was corrected to reflect that the Michigan Department of Education denied requests to spend stimulus funds to remove a swimming pool in Eastpointe and buy security equipment in Kalamazoo. The headline was changed to be more accurate, and a statement from state education officials explaining the process and denials was added.