“This is a significant impact,” Spina said. “And if you haven't seen it with your own eyes on students, it’s worth seeing: the seven-year-old who was in the bathroom when the drill happened (who) couldn't get back into their classroom because the door was locked, that's crying on the floor. You know, this is not stuff that I think the public sees a lot of times.”

Spina was among a group of Lansing-area school and business leaders, lawmakers and law-enforcement officials meeting Monday to address how to balance preparedness for safety threats while ensuring schools remain places where students feel safe, loved and enjoy learning.

Monday’s gathering comes a few weeks after the Michigan House School Safety Task Force, a bipartisan group of lawmakers, proposed several bills related to school safety. The group was formed after four students were killed and seven people were injured in a shooting last November at Oxford High School.

Michigan schools are required by law to perform lockdown drills and Spina said he knows they’re important. But the Williamston superintendent said other considerations also come into play when children are involved.

“These are not fortresses, they're not prisons,” he said of schools. “Kids are supposed to come there to have fun, to enjoy each other's company and to enjoy learning.”

Ingham County Sheriff Scott Wriggelsworth said school threats are another concern. He said during the past school year, there were back-to-back threats and he had 19 deputies investigating the threats. 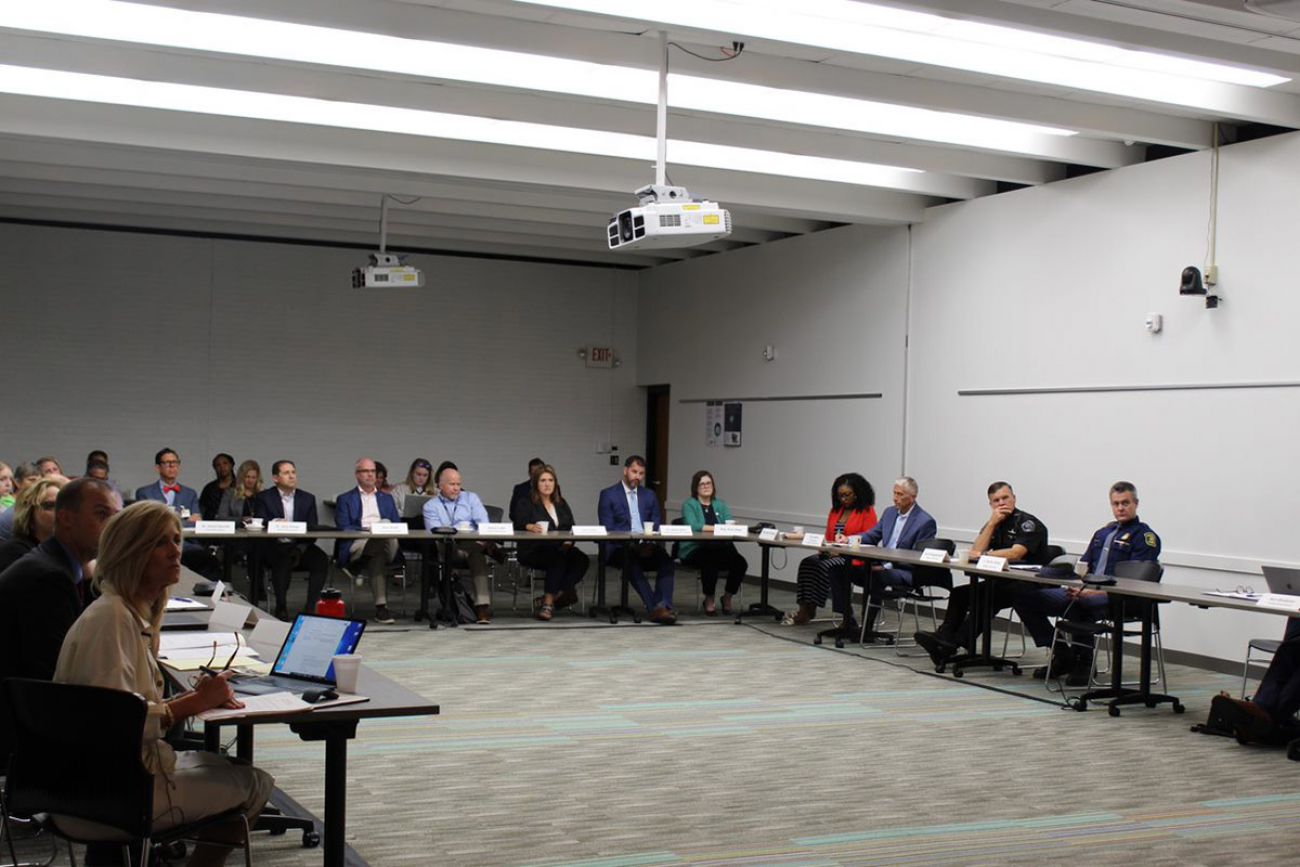 “For the most part, everything else stops until we can figure out whether there's some legitimacy to the threat or not,” Wriggelsworth said.

Several officials spoke about the importance of working together to solve school-related violence. Before the press conference, more than two dozen area leaders attending the gathering met privately.

“I don't think we can talk about school safety without talking about adult and student mental health, along with gun safety and communication with families around how to safely store guns, and how to communicate with other families when students are going to a home that may have guns in there,” said Dori Leyko, the East Lansing Public Schools superintendent.

“I think it's getting more challenging, harder and harder with every act of violence that occurs to ensure families and the community that their kids are safe to come to our schools every day,” she said.

Ingham Intermediate School District Superintendent Jason Mellema said the group will hold more meetings in the future and hopes to include student voices, too. He said the group has not established metrics on how to measure whether they have made area schools safer.

“I'll be honest, we've got kids that we owe this to regardless of whether they're in first grade or whether they're in 11th grade. So we can't wipe our hands of this at some point in time and say that we're satisfied as leaders. We owe it to every student to make sure that they're safe when they come into our schools, that they return home safe at the end of every day. So I think this is an ongoing issue.”

But the recommendations — drawn up by a task force of four Republicans and four Democrats — do not include additional restrictions on owning a gun.

State Sen. Curtis Hertel Jr., D-East Lansing, said while he is optimistic about the education budget and the work of the Michigan House school safety task force, it’s “much, much harder” to solve school safety issues when Republicans are unwilling to have conversations about gun control.

“We have seen a Legislature that refuses to have any real conversations about gun safety,” he said.

In the meantime, school officials say they will continue to try to make schools safer.

Spina, for example, said his district is completing construction on the last two buildings that didn’t have secure entrances and installing an updated security and lockdown panic alarm system to decrease response time in the event of an emergency.

The district is also conducting a “comprehensive review” of emergency operations and working with local police to ensure school resource officers have more hours, Spina said.