Four Indigenous women —  “warrior-ing up” and dressed in regalia — were photographed earlier this month in downtown Detroit. The image of the women, who proudly surrounded a marble column that displayed a bust of Christopher Columbus for 110 years, made its way around the world. 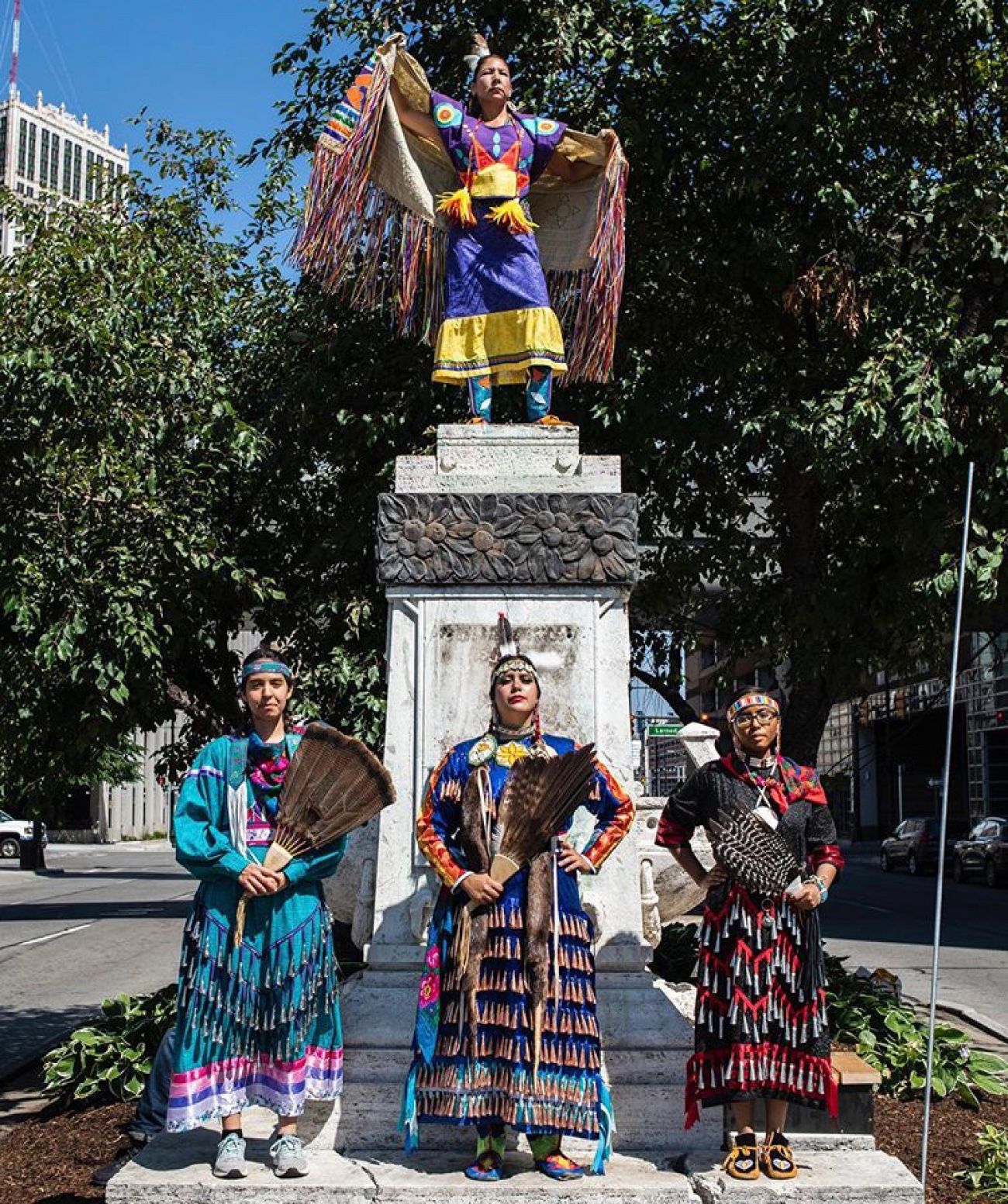 Shared more than 100,000 times, the portrait captures a moment of sweeping cultural change that’s been inspired by the Black Lives Matter movement.

Last month, city officials abruptly removed the bust from its lofty downtown perch on Randolph Street and East Jefferson Avenue near the Detroit/Windsor Tunnel. The column is still standing.

In the photo, Courtney Miller, a member of Grand Traverse Band of Ottawa and Chippewa Indians, stands in the space Columbus once occupied. Her face is tilted up. Her arms are spread like she’s ready to take flight.  Below her three Indigenous Jingle dressers— Hadassah Greensky, Joelle Joyner and Teia McGahey —stand at the foot of the monument. 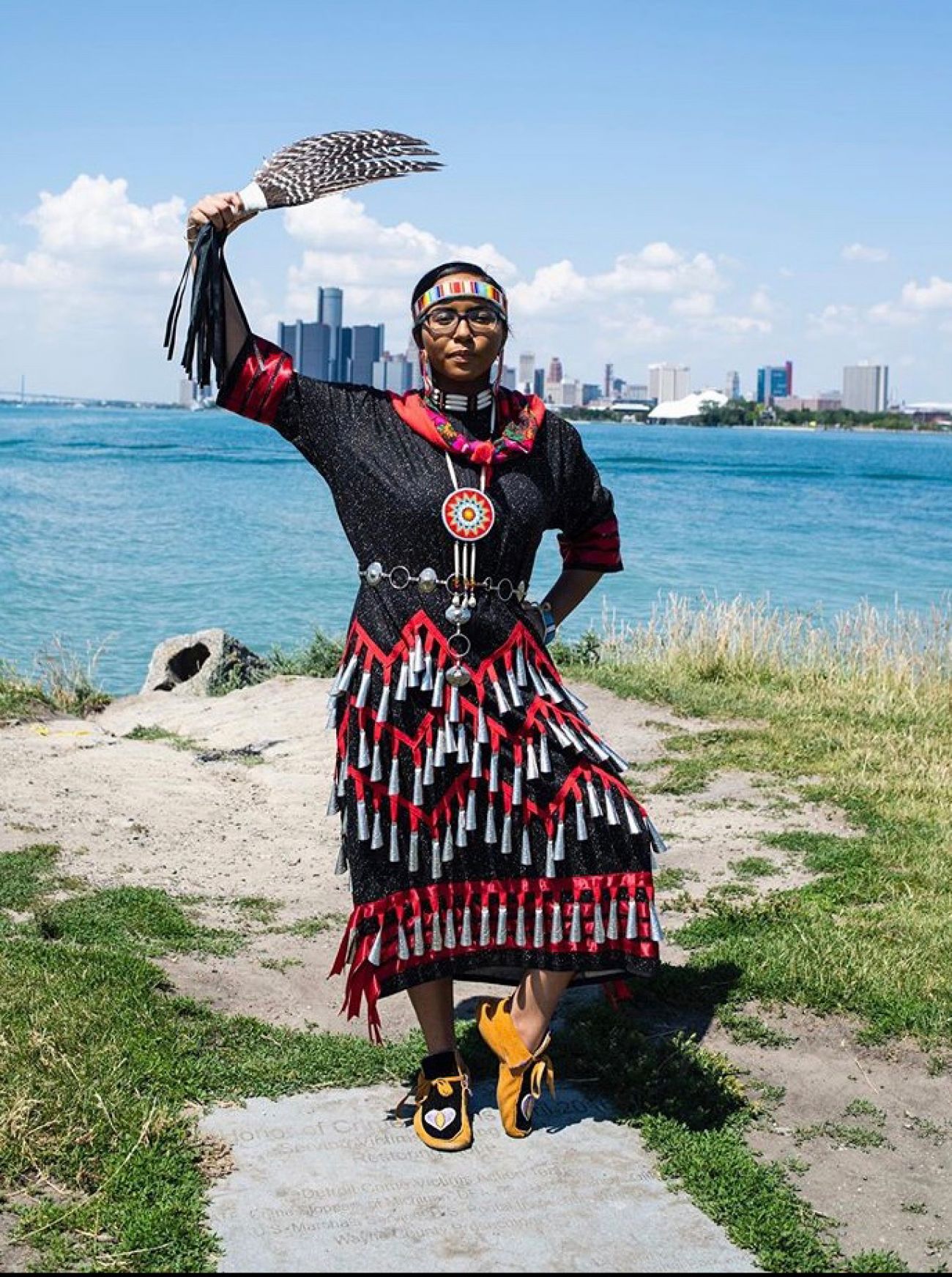 “I started thinking about all our ancestors,” Miller recalled, as she climbed atop the column.  A plaque on the statue declared the Italian explorer “discovered America.”

“Right at the moment when I was thinking about them, the sun came out. It was shining right on my face,” Miller said. “Then, I felt a wind and I thought I should spread my arms. And I thought, ‘Wow, I’m being directed by the sun and the wind.’

“I felt tingly, I knew something was happening.”

The other three felt something in that moment too. The trio are wearing the sacred regalia, made by family and friends, of those who participate in the Jingle Dress Dance.

The Jingle Dress Dance has origins in the Ojibwe nation in the early 1900s  — most likely during the worldwide flu pandemic that killed tens of millions.

The dress was first seen in a dream by a medicine man, according to lore. His granddaughter grew sick, and as he slept, his spirit guides came to him and told him to make a Jingle Dress for her. The dress should have dozens of small metal cones that make a ‘jingle’ sound when the person in the garb moved. If his granddaughter danced in the dress, it would heal her, the medicine man believed. She healed. 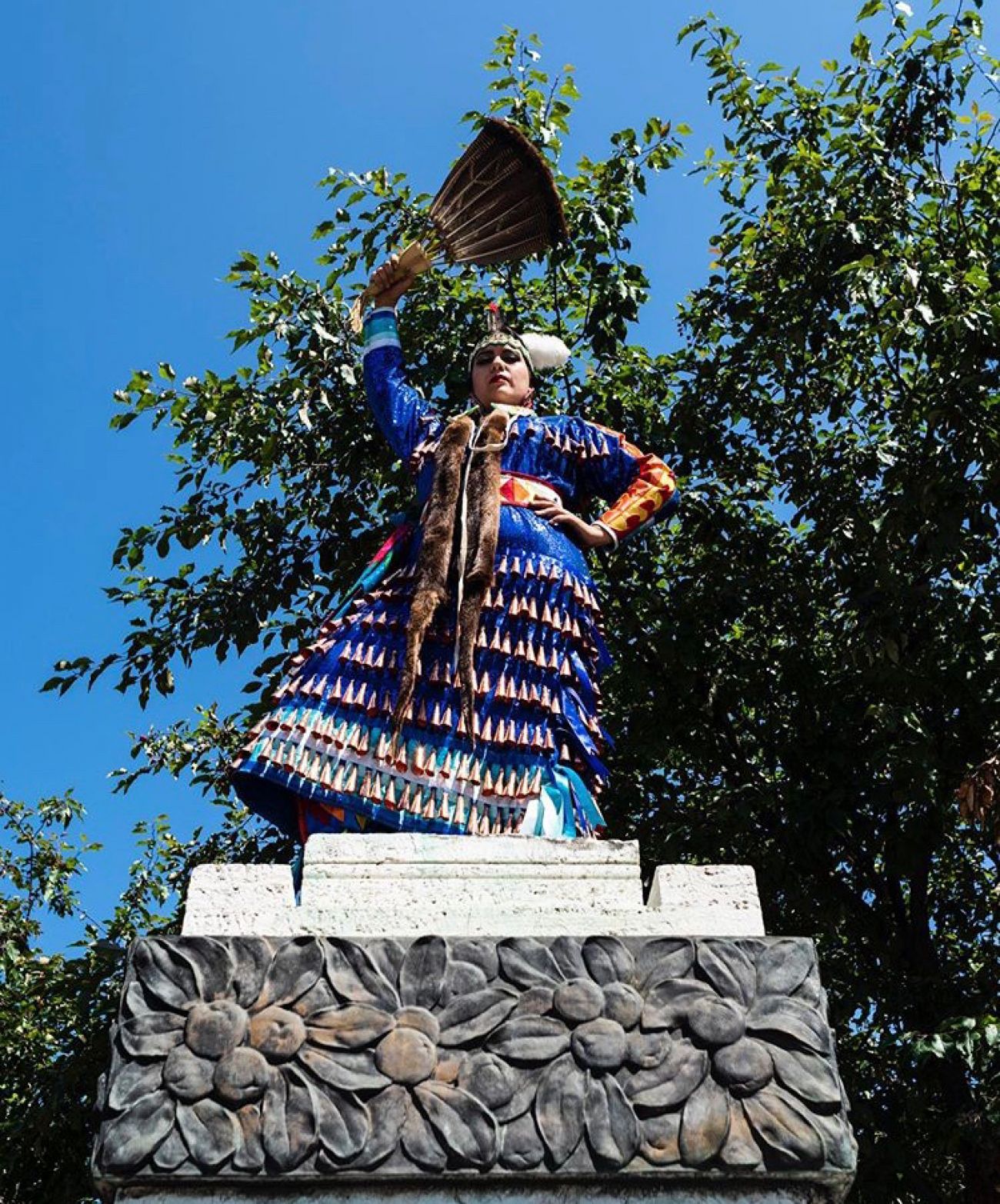 “Up until the late 1970s, it was illegal in the U.S. for Native Americans to have any kind of ceremony,” says Hadassah GreenSky, who is Waganakising Odawa. She’s one of the three standing in front of the former statue in the photo.

Since 1937, Columbus Day has been a federal holiday. Columbus’ arrival in 1492 to what is now the Bahamas eventually led to the genocide of Indigenous cultures through colonization, slavery and disease.

Like a lot of Indigenous young women, GreenSky, who grew up in the Detroit area, got called Pocahontas a lot in school, she said.

The design of GreenSky’s Jingle Dress regalia came to her in a dream, she said. “It makes you feel wonderful and proud. It’s those times that you know your ancestors and spirits are with you,” she said.

The other two in the photo are Detroit residents Teia McGahey and Joelle Joyner. McGahey is Anishinaabe, Mexican and Irish. Joyner is Black and Indigenous Meherrin.

“I remember thinking about strength at the moment,” of the photo, McGahey said. “Our communities have made it through so much. Sometimes it feels like we are [made to feel] invisible.”

The photo was taken by Detroiter Rosa Maria Zamarrón, who is of Mexican heritage. She’s a professional photographer who runs La Sirena Studio in southwest Detroit.

Zamarrón also knew the photo was special as she was taking it. “It took all of 15 minutes. I didn’t even have to give [the four] any direction.  I knew it looked really majestic. It was a huge honor for me to witness.” 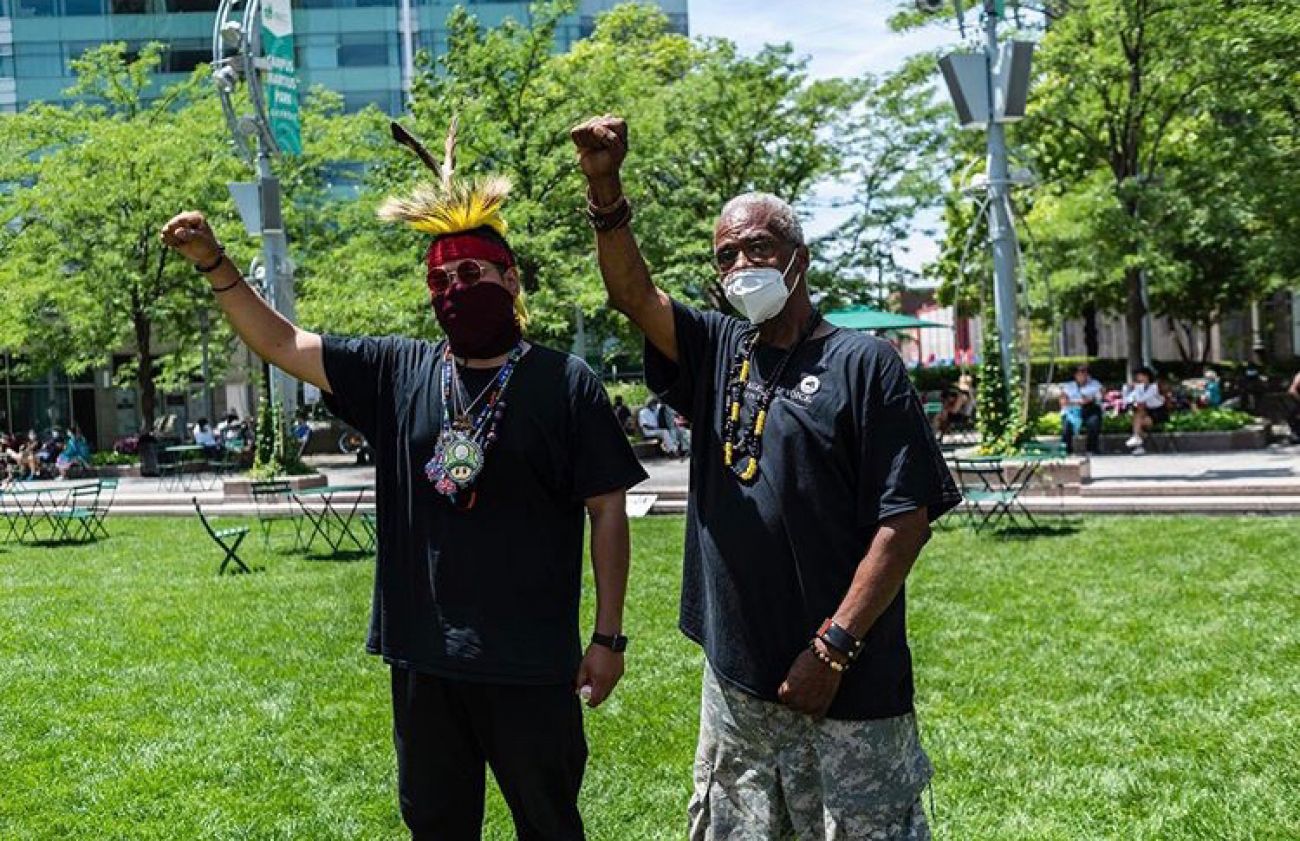 The photo was taken July 1. A day later, Zamarrón posted it on various social media. There was tremendous feedback instantly.

“I started hearing from family, friends, people I used to work with; people that I hadn’t talked to in years,” Miller said.

“It’s so great because many people have commented that it makes them feel so proud and happy, and that’s so wonderful,” McGahey said.

The image has been widely praised. Among those who shared the image include the musician/comedian Reggie Watts and the website The Conscious Kid. Someone wrote a story about it on Medium.

Within four days of its original posting, Vogue magazine ran a piece on the photo and the participants.

Photographer Zamarrón explains the photo: “It’s a way to showcase our goal of the Waawiiyaatanong Resurgence, which creates a political and social paradigm shift that will divert power away from the colonial patriarchy, and into an indigenous matriarchy headed by women and two-spirited people.”

Waawiiyaatanong is the indigenous name of the region before it was renamed Detroit.

The four individuals in the photo, along with the photographer, are part of the Waawiiyaatanong Resurgence. It is a movement rooted in uplifting original native organizing structures and protocols that honor the sacred relationships to the land and creation.

The group also took part in a Blueberry Moon Ceremony held in Campus Martius Park on July 4, which included dancing, prayers, and a pipe ceremony. The event was held in partnership with members of Frontline Detroit, a group fighting for social justice.

“We feel very aligned with Black Lives Matter movement,” Zamarrón said. “It’s about being in solidarity with each other. It’s a shared struggle.”

Part of the struggle for Indigenous people is preserving their history and getting rid of demeaning images and symbols.

This week, the owner of the Washington Redskins said the team would change the name of the NFL franchise, after saying for years he’d never change it.

Last week, a resident of Detroit’s Indian Village community wrote a letter to his neighbors urging a name change of the area. The resident is a member of the Nottawaseppi Huron Band of Potawatomi.  The board of the neighborhood association will discuss the idea next month.