Anti-tax. Anti-gay. Anti-Obamacare. That’s all you need to know about brash Tea Party favorite Tom McMillin. Or is it? A growing chorus of progressives are finding common bond with the Rochester Hills Republican.

The brash Republican hasn’t had much legislation signed into law, but it’s not for lack of effort. McMillin’s nearly 200 bills and resolutions span the political spectrum, from deeply conservative efforts to restrict abortion and gay rights, to strange-bedfellows alliances with the ACLU and progressive Democrats on civil liberties issues. 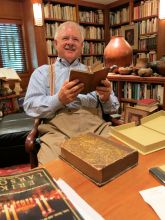 Why ‘dark money’ matters when you stand before a Michigan judge

Why Michigan citizens should care about money in judicial politics