Stay-at-home orders in the early months of the coronavirus pandemic left people wondering how to fill their time. The resulting national puzzle shortage proved fruitful for the state archivists entrusted with images of Michigan’s past.

They’re not just preserving the state’s past at the Michigan History Center in Lansing. A group of state employees and volunteers also use an industrial cutter to create jigsaw puzzles to send to stores and tourist stops across the state.

Birds-eye views of Ann Arbor, Flint and Coldwater from the 1800s. A vintage map of Marquette and Mackinac Island. More communities, cut into 500 or 1,000 pieces.

“We’re trying to hit the intersection of people’s love and pride in this state, and there is much, with the history of this state,” said Mark Harvey, Michigan archivist.

In a typical year, they may make and sell 1,000 puzzles for individual  and wholesale orders through the Michiganology online store. Undetermined so far is how many this year they will generate amid interest that nearly doubled this spring.

“We surmise people are homebound and ordering puzzles of their community,” Harvey said. 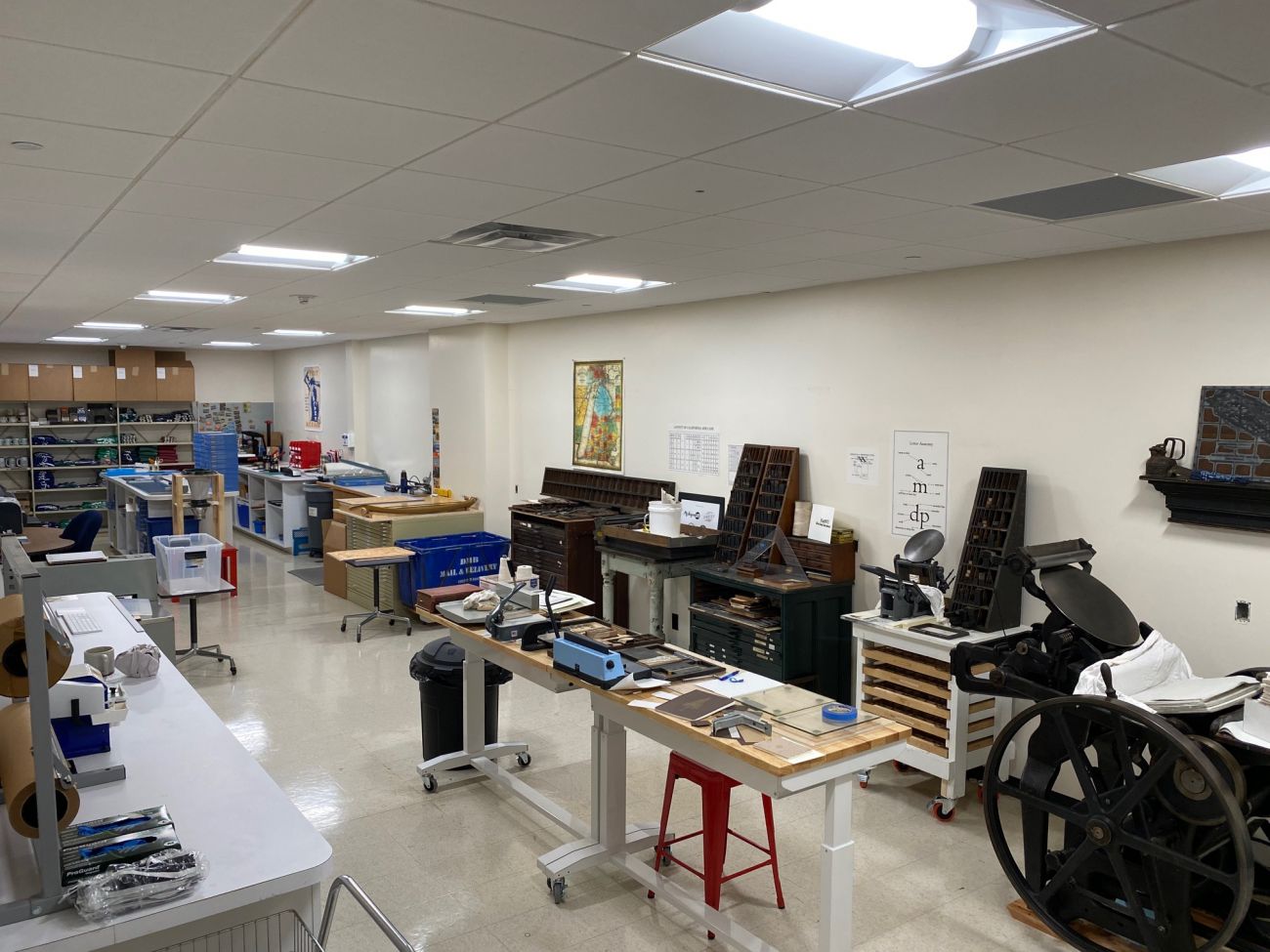 The puzzles aren’t shipped from a shelf. “We’re more like a bakery,” Harvey said, “making puzzles to order. Sometimes when we ship them they’re still warm.”

Puzzles are among the state-centered products made and sold to benefit the Michigan History Center. Mugs, prints, magnets and apparel also are found in the online market. They were just joined by “Say YES! To Michigan” socks.

But it’s the puzzle production that shows off the office’s entrepreneurial spirit.

It started 10 years ago with the office making reproduction prints of vintage travel images from archives for a hotel chain. That grew to realizing that products using those images would keep them in the public eye — and, possibly, grow into a revenue stream. 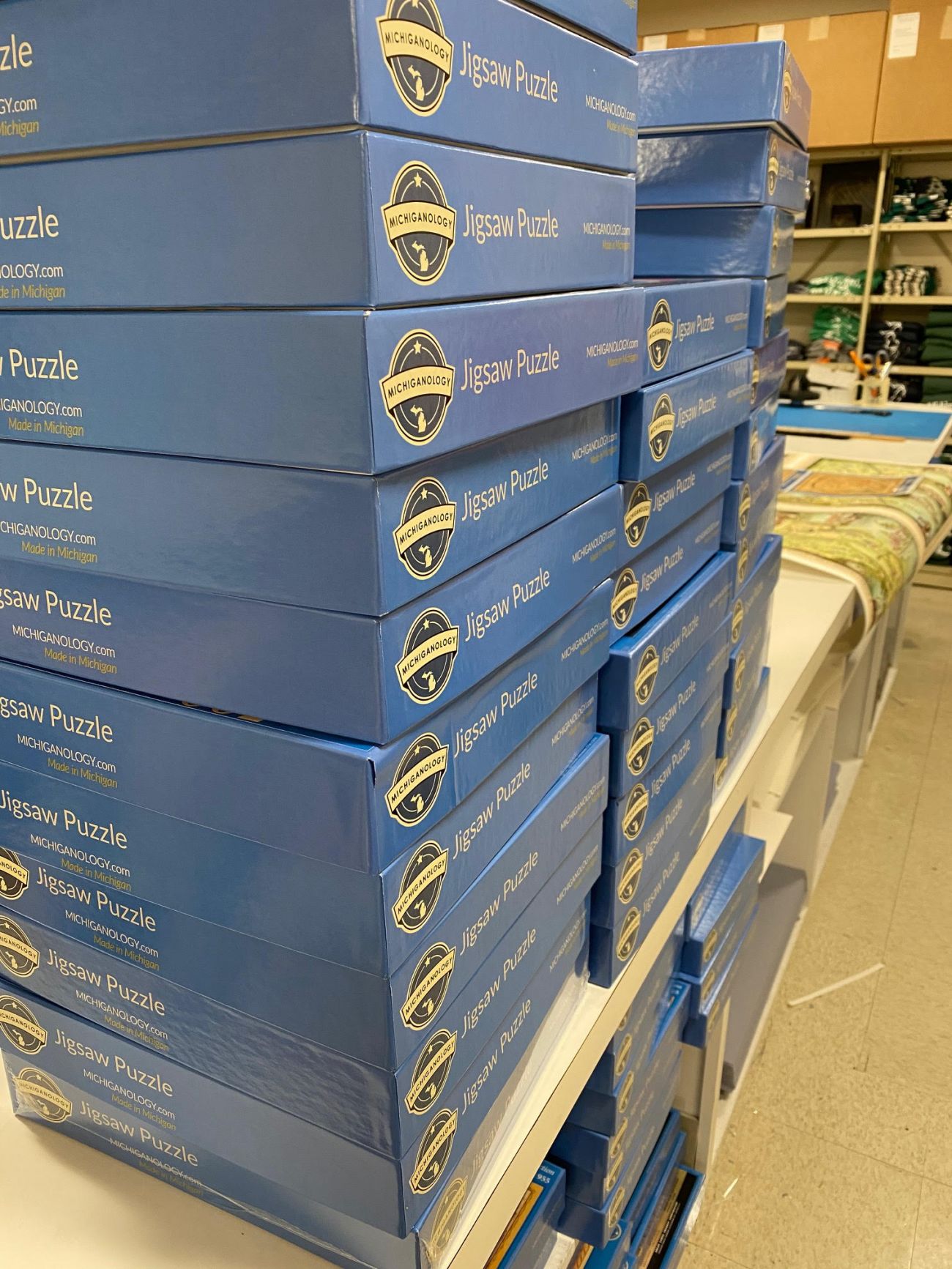 That’s when, Harvey said, the center “started a history side hustle.”

“We were looking for ways to raise revenue because of shrinking general fund dollars,” he said.

A long, narrow storage room in a corridor of the Michigan History Museum turned into the so-called Lab 109 production center, with jigsaw puzzles at the center of their product lines. Beyond that, equipment includes printers that make oversized prints, button makers, magnet makers, small-scale screen printing equipment,  and — most recently —  a 1923 letter press that Harvey and his crew spent a few months over the spring learning how to operate.

“We have a volunteer team that helps out the staff now,” Harvey said, saying that the state employees typically volunteer their production time, too. “It’s really a labor of love.”

It’s also turned into a business incubator for a group of people that Harvey describes as historians and curators, not business professionals. But they work out pricing and production efficiencies more like MBAs. Start to finish, Harvey said, a puzzle is created in 8 minutes, 5 seconds.

“We try to lessen the time of labor and spend more time in refining the process,” he said.

The production room was shut down in late March during Michigan’s stay-at-home order, reopening in May.

“It was actually very sad,” Harvey recalled. “We were thinking, ‘People need puzzles at a time like this.’ And we weren’t able to make them.”

By the time the office reopened, sales jumped 90 percent during what often is a slow period, and bulk orders started to come in. Among them was the Grand Hotel on Mackinac Island, which bought 100 to sell in its stores.

Overall, it’s a low number as far as sales, he added, “but it doesn’t feel small-time because we’re doing it on a skeleton and volunteer crew.”

They could grow, Harvey said, by adding a sales representative to sell wholesale orders instead of word of mouth and repeat orders. Limitations of time and space don’t make that practical, but orders still come in. One recent order came in from Cherry Point Farm Market in Shelby, which asked for more than 200 puzzles.

The puzzles —  as might be expected —  are stocked in stores that cater to Michigan travel. Stores like Purely Michigan in St. Joseph, Island Book Store on Mackinac Island and Good Hart General Store in Harbor Springs are among other stores that placed additional orders after initial sales.

Expanding into stores in southeast Michigan is a goal for the office, Harvey said, but no one working on the hand-made puzzles envisions a move into big-box or corporate stores.

“I don’t think we’d get the message out like we are now,” he said.

Before coronavirus demand increased, the Michiganology effort generated about $15,000 per year for the Michigan History Center. The fund-raising goes through the nonprofit Michigan HIstory Foundation.

“That seems small,” Harvey said. “But for us, that is essentially the operating budget of a couple of different units in the history center. So it makes a big difference.”

This is a tough year for the state’s budget, with Gov. Gretchen Whitmer warning of a $3.2 billion shortfall. Another $3 billion shortfall could come next year. Cuts to staff and departments could be coming, Harvey said.

The puzzles and related products will help.

“The more we can do to refine this project and earn revenue, the more that will offset whatever cuts are coming down in the future,” Harvey said.

But the satisfaction goes deeper, he said.

“We want people to explore the state and its history,” Harvey said. “And the soft sell is that we have something to help remind you of a fact or why you’re proud of Michigan, or remember where you want to explore.”