When Larry Kirchhoff heard the news of the U.S. Supreme Court overturning Roe v. Wade, he was angry.

The 51-year-old wrote out a few words on his phone while sitting in his office at All Star Mechanical, the Lansing-based heating, venting and cooling company he owns, and hit send. Days later, an ad ran on page 11 of the June 29 issue of City Pulse, a Lansing-based alt-weekly.

The ad said less about climate control than the climate of the nation.

“I can’t pretend like everything is ok,” read the ad Kirchhoff had written. “Gun fetishes are being prioritized, women are no longer in control of their own bodies. The earth is heating up. Black and Brown people are still being killed, brutalized, or otherwise harassed. Honestly, at this point, who gives a SH*T about HVAC. But if you’re hot, give us a call.”

Within days, the quarter-page ad in a free, Mid-Michigan circular had gone viral.

Two different Tweets sharing the same photo of the ad received a combined 123,000 likes and 17,000 retweets as of July 5. 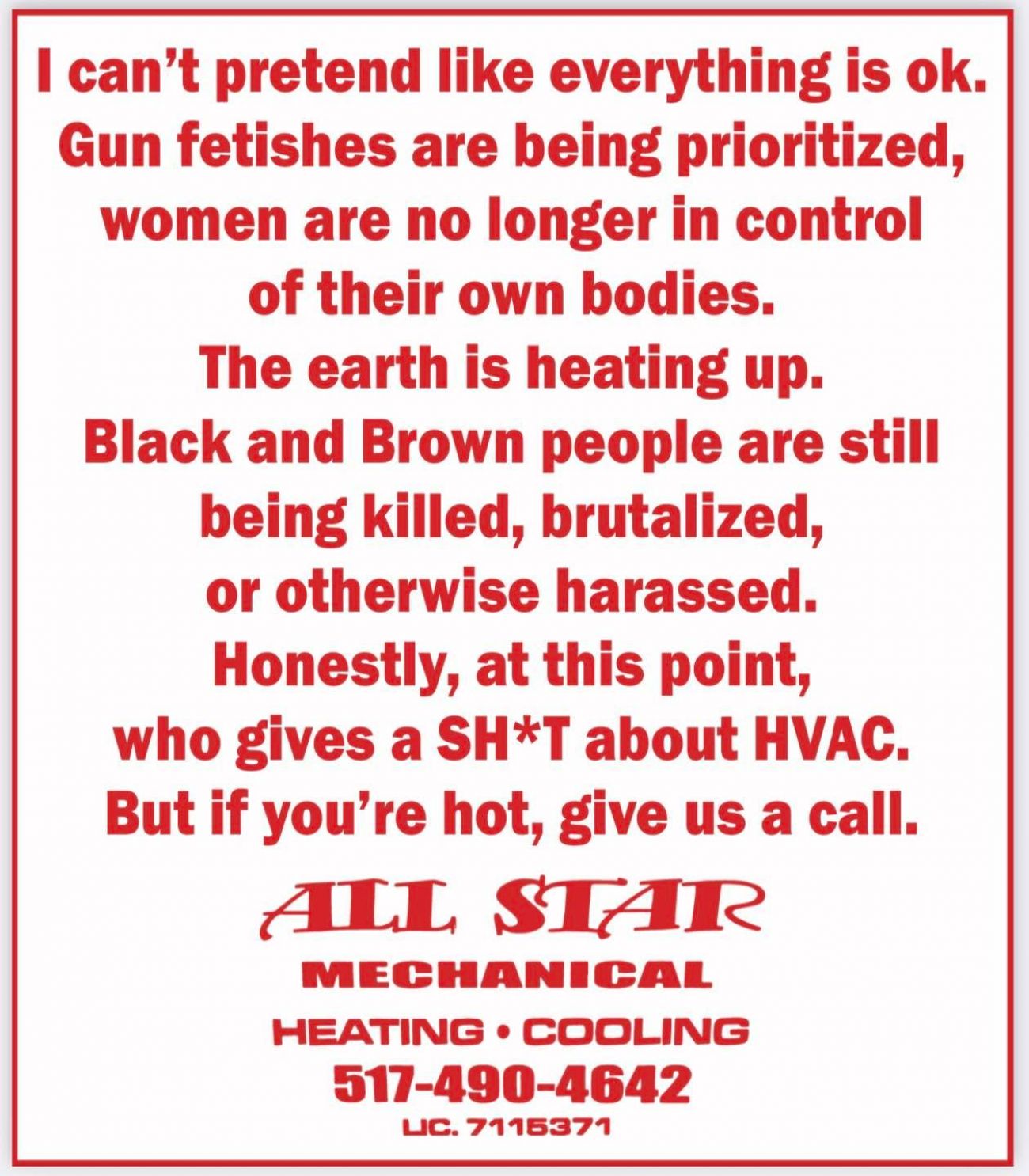 A quarter-page ad for a Lansing heating and cooling company spread across social media this week.

The company’s phone has been ringing off the hook since the ad ran, with calls from around the country. Many call just to see if the company listed in the ad actually exists.

The five-employee shop advertises weekly with the paper, with some ads featuring photos of new furnaces, and some with a more political bent. For example, Kirchhoff paid for a full page ad advocating for the Juneteenth holiday to be properly celebrated rather than have corporations “monetize and virtue signal.”

“I'm a little bit fearful that people are going to use this holiday as just another excuse to celebrate or party and and gentrify it or commercialize it,” he told Bridge.

Still, his ad after the Supreme Court struck down national protection for abortion rights was the first to garner national attention.

“The exact reason for this particular ad was because that's exactly how I felt in the moment … particularly with Roe versus Wade, and just everything else that's going on,” he told Bridge Michigan.

Kirchhoff has been incorporating politics into his advertisements for seven years, beginning when he saw Colin Kaepernick kneel in support of the Black Lives Matter movement.

His wife didn’t want him to use his business accounts as a platform for activism at first, but after a conversation, he said he “couldn’t not do it.”

Kirchhoff said he made the decision knowing he would face backlash. He lost some customers because of his ads, the business owner said, but he believed his reputation as a good heating and cooling contractor would keep people around to support him. “I wasn’t wrong,” he said.

“Prior to speaking out, I had done everything I could to be the best heating and cooling contractor in this area,” he said. “And I think I had achieved great success at that and I felt pretty strongly that there were people that were going to support me.”

While he’s been getting more calls outside of Lansing, Kirchhoff doesn’t think this advertisement directly impacted business because there’s a good chance most local customers already knew about the advertisements.

All Star Mechanical isn’t the only small business in Michigan that has mixed business and politics in these hyperpartisan times. Detroit’s Cold Truth ice cream shop made headlines after saying it wouldn’t serve police officers wearing body armor. Just down the block, City Bird collected customer signatures in support of abortion access and reproductive rights.

Early in the pandemic, an Owosso barber shop made headlines when its owner Karl Manke reopened its doors in May 2020, in violation of Gov. Gretchen Whitmer’s executive order that closed “non-essential” work. Manke protested the order by providing haircuts on Michigan’s Capitol lawn. He was served $9,000 in fines.

Jimmy’s Roadhouse in Newaygo reopened in May 2020 against Whitmer’s “Stay at Home” order. In November of the same year, the lost its liquor license and was levied a $1,000 fine after staying open despite another temporary ban on indoor dining.

Kirchhoff insists his politically-tinged ads aren’t a business strategy. On the All Star Mechanical Facebook page, he wrote that he’s trying to “inspire the silent majority” and show that all voices matter and can have an impact.

“I don’t do calculated marketing, I’m just sad and angry,” the post said. “It was off the cuff and organic, because that’s how I feel every single day.”