Michigan’s iconic “Tunnel of Trees” above Harbor Springs is usually quiet in winter, but that’s not the case during the past week at its northernmost point in Cross Village, population 62.

Legs Inn is still temporarily closed for the winter. So is Old World Cafe. The town’s general store and gas station have been dark since last summer when they were listed for sale.

But the Emmet County village’s only art studio is filling with people every day as word spreads of a local fundraiser for Ukrainians launched March 4 that already reaches across the U.S.

Textile artist Joann Condino of Three Pines Studio, who said she is distraught over the devastation in the Eastern Europe nation during the Russian invasion, created two new designs of linen tea towels featuring symbols of the Ukraine: wheat, which it exports around the world,  and sunflowers, the national flower. 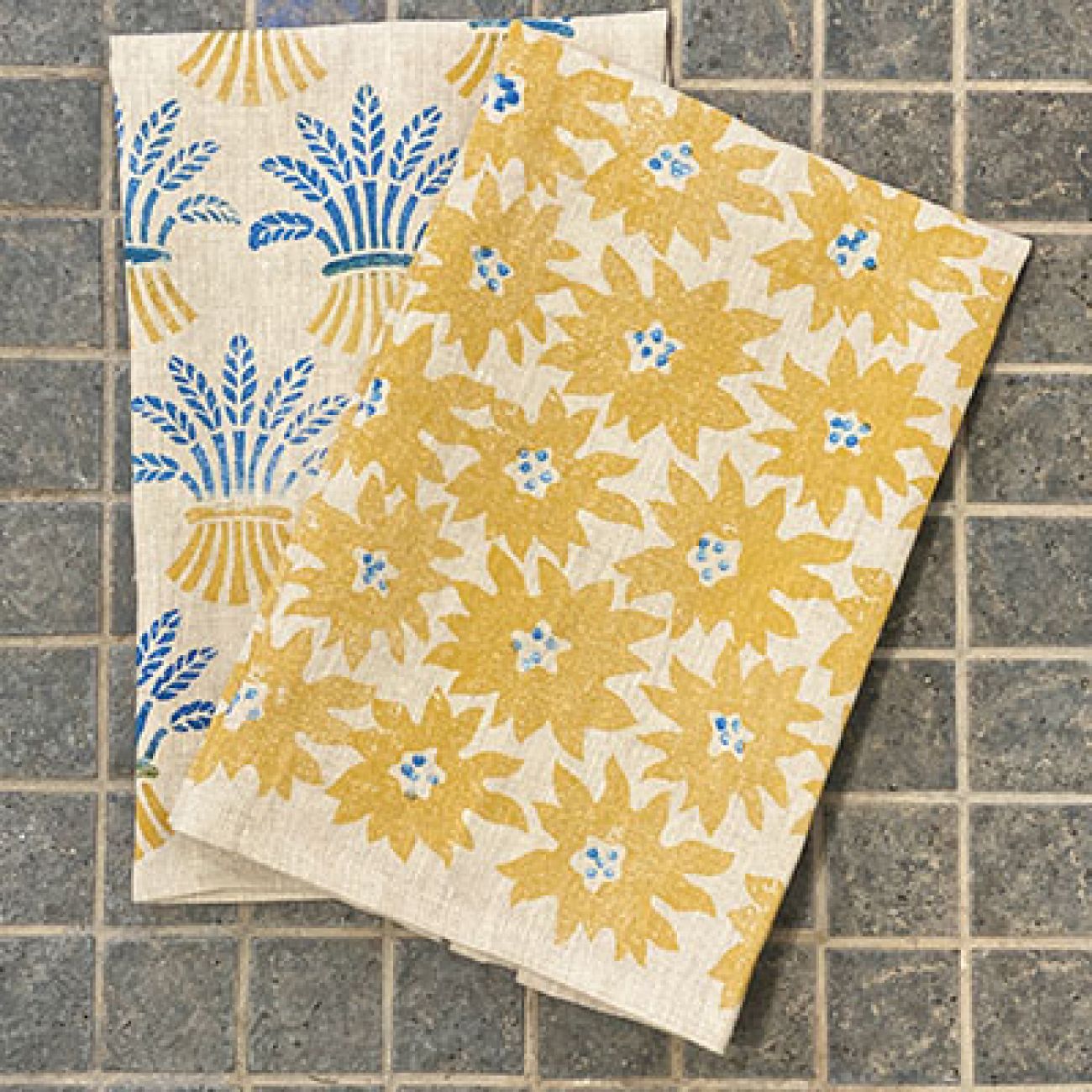 The hand-printed linen towels are in the Ukrainian colors and depict the national flower and country’s biggest food export. (Courtesy photo)

“I had to do something,” Condino told Bridge Michigan.  “And the only thing I know how to do is create designs on fabric.”

In just one week, Condino sold 600 dish towels — as many as she normally sells over a full year. Demand for the $30 hand-blocked dish towels is pushing the studio to its limits, but Condino learned that many of her neighbors felt just as helpless over the invasion. Now the fundraiser is a community effort, pulling in volunteers and spilling into homes of area seamstresses.

A visual artist, Condino turned to the wood blocks depicting wheat, created by an Italian artist, and a sunflower after she saw the images circulating on social media. She recognized that symbols of war and sacrifice — like the red poppy for U.S. veterans — form enduring images.

The fundraiser took off after a text to a friend turned into a grassroots referral network.

Orders, coming daily from across the U.S., have generated $10,000 toward helping to feed Ukrainians as the Russian invasion continues, 10 times Condino’s original goal. Half of the purchase price is donated, while the rest covers costs of materials.

Condino says the pace in the studio is overwhelming compared to typical days, like on Wednesday when she managed to print 15 towels during an 18-hour day filled with the logistics of running the growing volunteer crew.

But it’s also, she said, “empowering.”

People want to do something, Condino said. But they often don’t know how. Pitching in on the tea towels gives them a way.

“The response is just phenomenal,” she said.

The donations are going to World Central Kitchen, founded by chef José Andrés, a nonprofit that serves meals to people caught in humanitarian crises and natural disasters. Andrés and his organization have been in and near Ukraine for more than a week, establishing meal stations at eight Polish border crossings and setting up meal distributions in Hungary, Moldova and Romania.

The nonprofit also is financially contributing to several restaurants within Ukraine, a move that keeps food accessible and also supports the local economies amid the Russian invasion.

World Central Kitchen grew from $29 million in revenue to $270 million from 2019 to 2020, the most recent year represented in its financial statements.

At least 2 million Ukrainian refugees have already sought safety in neighboring countries, and another 18 million — representing one-third of the country’s population — will need assistance, the American Red Cross estimates. The U.S. is contributing over $100 million in aid so far, including $50 million announced on Thursday by Vice President Kamala Harris during a visit to Poland.

Michigan-based collections to help also are growing as the images of Ukrainian civilians dying on their streets stir many to action. Efforts include a coat and blanket drive in Traverse City, medical supply collection in Warren and cash from large companies, including Ford.

Smaller businesses also are contributing, like Zingerman’s Bakehouse in Ann Arbor, which is joining with global bakeries to make hamantaschen and will donate $1 for every one sold. The filled pastries are typically made for Purim, a Jewish holiday to celebrate victory of good over evil.

Condino, 71, said she advocated for social justice through movements of the late 1960s and early 1970s, including women’s rights. That followed growing up in Detroit as the child of Italian immigrants and neighbor of Europeans who had lived through World War II.

For a child of the 1950s who came of age under the specter of potential nuclear attacks amid the Cold War, watching the Ukrainian invasion is a “nightmare scenario,” she said.

Her studio space on the edge of the village normally displays merchandise made by northern Michigan artists, while two 400-square-foot studios attract people who want to make their own fiber and clay pieces. Condrino, a former Wayne State University marketing director, has used wood blocks to make her own textile art for about 20 years.

But for now, the Ukrainian-themed tea towels fill her days, from early morning to near midnight. During many of those hours, she’s joined by others who also feel the connection between the kitchen textiles and feeding people from the county the designs on them represent.

On Thursday, the McCormick sisters, Fern, 9, and Olive, 7,  hand-applied the centers of sunflowers. At least six friends, including one from Texas, cut linen to help keep up with production. 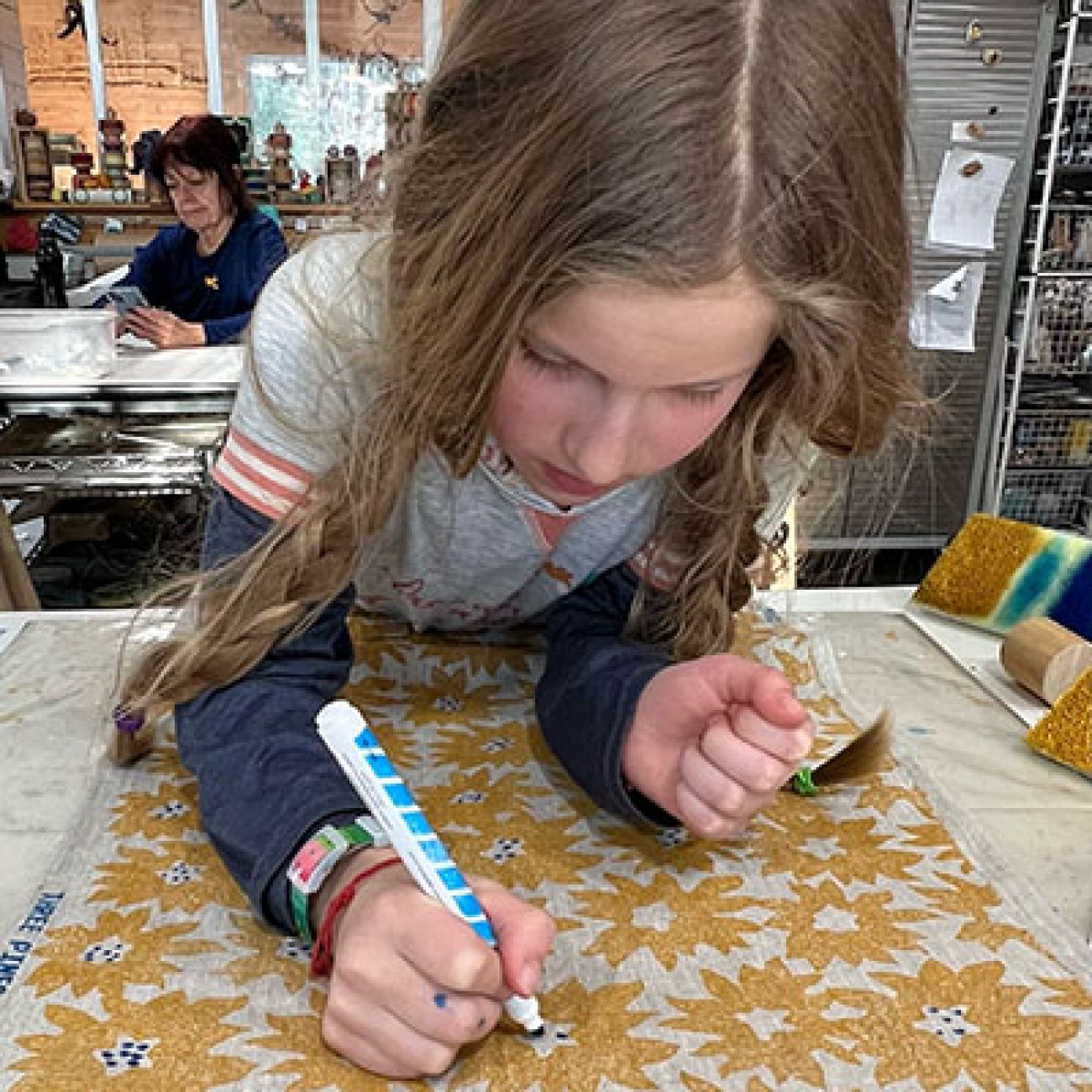 Kathleen Lio jumped at the chance to help her friend in the studio, arriving on most days last week with her husband, John, eager to cut labels or do anything else that allows more tea towels to be shipped to buyers. On Thursday, that included bringing Condino a carryout container of sweet potato ginger soup from Toski Sands Market in Harbor Springs. Lio knew her friend hadn’t eaten lunch or made plans to do so.

The work in the studio, Lio said, “is humming.”

“Every spare stool has a volunteer on it, doing some kind of skilled or unskilled labor to help out, and happily so,” Lio said.

Condino said she’s hoping customers are patient, since the hand-made towels do take time, from cutting and hemming the linen, to imprinting the images, then setting them with heat. By Sunday, she added, she was able to make 34 in a single day.

Still, she said, she’s hoping for volunteer reinforcements, hoping that former art students will join her on the wood blocking.

Condino also said she’s recognizing that breaking even on costs may be an elusive goal.

Even before the crisis in Europe, supplies were difficult to obtain for fiber arts, mimicking the shortages across other industries. She’s working with her suppliers, including one with ties to Eastern Europe, who recognizes the value of getting product to the Cross Village studio right now.

But if linen sources dry up or become too expensive, Condrino has her workaround ready: She’ll switch to cotton.

By summer, as northern Michigan fills with seasonal residents and tourists,  Three Pines Studio will again make room for students and Condino’s other sales.

“The Ukraine relief effort is not going to stop until there is no war and people are fed and they're safe.”