The deadline is this weekend for nearly 700,000 people in Michigan to once again validate their eligibility for federal unemployment benefits paid to them since April 2020.

They learned in a recent letter from the state’s Unemployment Insurance Agency that eligibility criteria has been changed, in some cases more than a year after payments were made.

UIA plans to review all of the cases, determining for each individual whether there’s been an overpayment. Restitution could be due.

The situation has the attention of lawmakers, who plan to call UIA officials in front of the House Oversight Committee when the Legislature resumes sessions in the fall, Rep. Steve Johnson, R-Wayland, told Bridge Michigan on Tuesday.

Many lawmakers already have spent months helping constituents who’ve struggled to apply for and receive jobless benefits. At least 3.35 million Michigan residents applied for unemployment pay since the beginning of the COVID-19 pandemic.

Elected officials are concerned that this latest hassle will create further hardship among people who in many cases have grappled with UIA bureaucracy, short-staffing, closed offices and difficulty navigating the agency’s phone system as it processed a record-number of applicants.

“There’s going to be a lot of bureaucratic time-wasting and frustration for citizens as a result of this whole process,” said Rep. Jeff Irwin, a Democrat from Ann Arbor, told Bridge on Thursday.

That frustration is shown by the increase in calls to Irwin’s office for help this week, he said, as news about the potential for benefit repayments circulated.

Irwin said he hopes the UIA will issue waivers when a determination results in an order for restitution.

Unemployment officials said Tuesday they’re “reviewing a waiver process,” but has offered no detail on the process or the timing.

The agency did not respond to a Bridge request for an interview.

According to regulations in the Michigan Employment Security Act, waivers will not be authorized if a payment was made due to intentionally false information.

However, it also says that “the unemployment agency shall waive recovery of an improperly paid benefit if repayment would be contrary to equity and good conscience.”

Still,  Irwin emphasized, people need to respond to the letters by Sunday and be ready to appeal any decision and to request a waiver if one isn’t offered.

The request to update eligibility was sent to just over one-third of the 1.9 million people who received Pandemic Unemployment Assistance, which was created in March 2020 by the $2 trillion CARES Act to provide benefits to those who do not qualify for the state’s unemployment system. They include part-time, self-employed and so-called “gig” economy workers.

About 648,000 people who have received PUA received the notice mailed in late June that they chose one of four reasons for eligibility that the state has since said no longer qualifies as a legitimate reason.

Instead, they now must go back into their UIA accounts — whether they remain active or not — to choose, or “re-attest,”  from a new list of reasons that would qualify them for payments.

Some may be ruled ineligible for benefits based on the retroactive change, with the potential for the state to determine that they owe restitution.

Another 40,092 received the letter who’d been ruled ineligible. Changing their criteria may now make them eligible for benefits, the state said.

Irwin said he’s considered that many people “will just ignore the letter because it’s so Byzantine.” The complexity of the message, he said, could create further problems as “people are having to check boxes and jump through hoops.”

Here are some things to know if you received the letter:

Irwin said he believes the state is signaling a willingness to help people with waivers if UIA determines they should have been paid after the recertification process.

In the meantime, he said, he was told the process of having every individual recertify was necessary under federal law. However, Irwin added, he’s hoping the state will be able to establish a class of waivers to allow people to clear the system in large groups so that the possibility of restitution doesn’t exist for an extended period of time.

“The latest wave or re-attestations is maybe caused because Michigan tried to get so much money out as fast as possible,” Irwin said of the UIA. “I think they’re the best they can given the volume of payments they were asked to do.”

PUA payments totaling $5.7 billion have been made in Michigan through the first week of July — an amount equal to the payouts through the traditional unemployment system.

Recipients of the PUA benefits received an average of $216 per week in Michigan, compared to the weekly average of $312 for regular unemployment benefits. 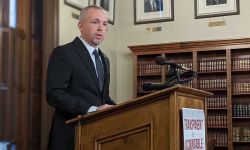