What urban revival? In Michigan, residents still flock to suburbs

Although much of Michigan is seeing population growth, the fastest growth is anchored in the townships just beyond the urban cores of Grand Rapids, Detroit, Lansing and Kalamazoo. SEARCH YOUR COMMUNITY by clicking the magnifying glass in lower lefthand corner.

For all the talk about the renaissance of Detroit and Grand Rapids, it turns out suburbs haven’t lost their allure.

With new homes and good schools, they’re driving the biggest population growth in Michigan as tens of thousands flock into the townships just beyond the urban cores of Detroit, Grand Rapids, Lansing and Kalamazoo.

Consider Oakland and Kent counties: Township residents comprise about 38 percent of each county’s population. But from 2010 to 2017, 53 percent of the counties’ growth was in semi-rural communities just outside inner-ring suburbs, according to Bridge analysis of population estimates released in late May by the U.S. Census Bureau.

“When you look at the big picture, we have parks, we have cops, we have fire (protection), good schools,” said Abe Ayoub, a real estate agent based in South Lyon in western Oakland County.

Actually, that’s a quadfecta, but Ayoub may be too busy to count.

He lives in Lyon Township, the fastest growing community in the state. Development stalled just before the Great Recession, but it has rebounded with abandon: the township has grown by 36 percent since 2010, and more homes are going up.

Those new homes, in developments with names like Rathmoor Park and the Estates of Hutsfield, are attracting young families that are sending hundreds more kids to South Lyon schools.

Biggest gainers, losers across the state

The phenomenon is counterpoint to the narrative –  nationally as well as in Michigan – that Millennials are fueling an urban renaissance. Make no mistake, Grand Rapids and some areas of Detroit are growing.  But far more young families are following the path of their parents and grandparents and settling in the suburbs.

It’s happening around Lansing and Kalamazoo and in the fastest-growing region of the state, Kent County, where most of the area is seeing steady growth. But the biggest gains, from 13 to 26 percent, are in townships outside Grand Rapids: Allendale, Blendon, Byron and Jamestown townships.

“The further you’re getting from Grand Rapids, you’re getting more of the growth,” said Eric Guthrie, the state’s official demographer, who added that housing patterns still suggest a need to be within driving distance to urban cores.

“There’s a certain level of convenience being close to the city.”

In fairness, Grand Rapids still led the state in overall population growth from 2010 to 2017, even though neighboring communities grew at faster clips.

Detroit, in contrast, has lost more than 40,000 residents since 2010, much to Mayor Mike Duggan’s chagrin. He has made reversing decades of population loss the centerpiece of his administration, but the numbers have fallen, albeit at a slower rate, every year since he was elected in 2013.

That’s more than have moved to Midtown –  a neighborhood that has seen explosive growth and investment –  since 2011. The neighborhood’s population has increased nearly 3,000 to 21,660.

One reason is because housing units that are constructed are often 700 square-feet or less, city officials acknowledge.

“Most of what is being built are smaller units for empty nesters and Millennials, they’re not good for anyone with families,” Detroit activist Linda Campbell said at a forum on housing in late April.

“It’s the biggest reason people give for choosing this area,” he said.

The numbers back up Ayoub: The enrollment of kindergarten, first and second graders in South Lyon schools has jumped 30 percent since 2010, with the kindergarten class alone jumping nearly 140 students. That’s as many as seven more classrooms in a single grade.

If this story sounds familiar, it’s because it is. 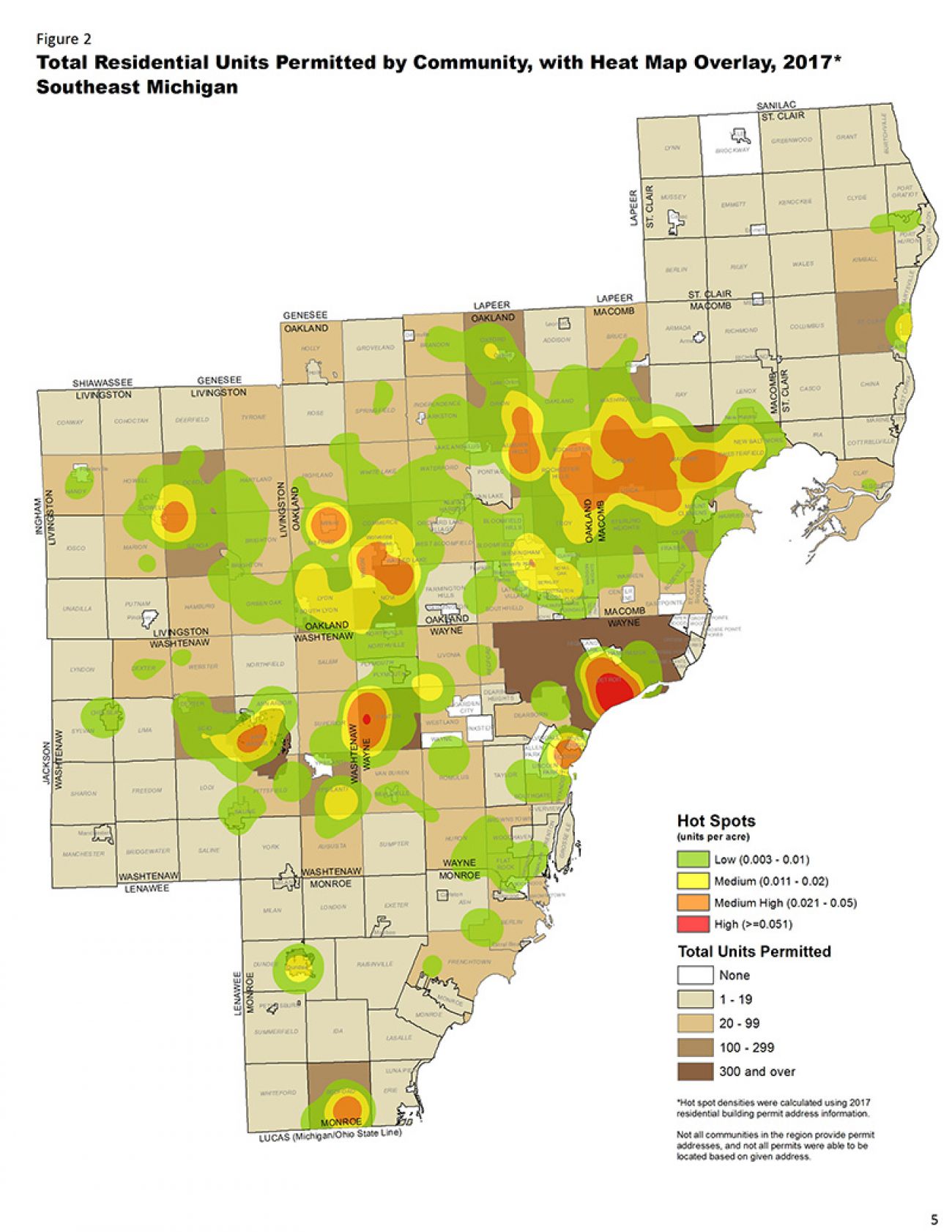 “It’s similar to what happened in the last decade, except for (the recent growth in) downtown Detroit,” said Xuan Liu, manager of research and data analysis for SEMCOG, the regional planning consortium for Metro Detroit.

The attraction: big lots, good schools, low crime and convenient access to shopping and jobs. A map of 2017 building permits shows a crescent of development just beyond the inner-ring of Detroit suburbs.

Now, developers are returning, driven by land availability and customer preferences, Liu said. That’s found them targeting a ring of townships just beyond the inner ring of the state’s urban cores.