YPSILANTI — The Center for Michigan on Tuesday announced Katy Locker as the nonprofit’s new chief executive officer effective January 2023. Longtime CEO John Bebow will serve as publisher of Bridge Michigan in 2023 and an adviser thereafter.

Center for Michigan founder Phil Power and Bebow launched the center in 2006 and Bridge Michigan in 2011. Power transferred his role as chair of the board to longtime board member and civic leader Paul Hillegonds this summer as the center added three new board members: Regina Bell, Sara Wycoff McCauley and Cindy Goodaker.

“The future of nonprofit, nonpartisan news in Michigan is bright,” Hillegonds said. “This executive and board transition primes the center for its next stages of evolution, investment and growth for even greater reach and impact.”

Locker has served as the center’s chief operating officer for the past two years. Her involvement with the organization originated many years ago when she was a program officer at the Hudson-Webber Foundation and later as Detroit program director for the John S. and James L. Knight Foundation.

A lifelong news junkie, Locker is delighted to bring her background as a funder, lawyer and community advocate to the work of the Center and its publications. A Michigan native and a Detroit resident, she holds bachelor’s and master’s degrees from Cornell University and a University of Michigan law degree and brings more than 20 years of professional experience to the work.

“I am ready, willing and excited to take on this next role as CEO of the center,” Locker said. “Our vision for the future includes growth and transformation built upon the organization’s tremendous legacy and a commitment to serve Michigan’s residents and its democracy.”

Locker will lead a dynamic nonprofit news and civic engagement organization. Since joining the center in 2006, Bebow grew and supported a talented and committed staff in developing innovative statewide public engagement campaigns, growing Bridge Michigan into one of the nation’s leading nonprofit news operations and helping to launch the BridgeDetroit local news and engagement initiative in 2020.

“The Center for Michigan has earned a significant place in the public affairs of our state, providing its residents with a better understanding of public issues and policy,” Power said. “John Bebow and I have devoted nearly 17 years to this work. We are both enthused that Katy Locker will now lead the organization forward.”

Growing from an initial annual budget of $250,000 and two employees, the Center now employs more than two dozen journalists and other professionals. The center will finish 2022 with record revenue of more than $5 million powered by more than three dozen philanthropies and exponential growth in reader donations which are now its largest revenue source. Published daily, Bridge Michigan attracts more than a half-million readers each month, including more than 100,000 email newsletter subscribers.

Bridge Michigan has earned more than 200 state and national journalism awards, including five Michigan Press Association Newspaper of the Year honors, two Michigan Journalist of the Year awards, and a wide range of recognition for public service, environmental, education, and government transparency reporting –and collaborations with news organizations across Michigan and the Midwest.

“My north star vision is for the center and its public service news and information initiatives to thrive for the next generation,” Bebow said. “Katy Locker has an extraordinary gift – her ability to maximize the effectiveness and impact of organizations and teams. I can’t even imagine the new heights to which she will lead here. It has been a life-altering privilege to work alongside so many talented and deeply committed colleagues with support of so many generous philanthropies and invested readers.” 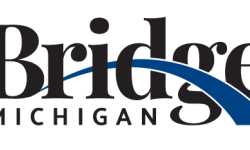 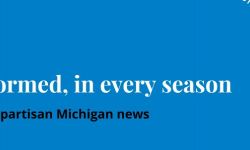 Looking back and looking forward this holiday season 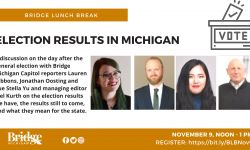