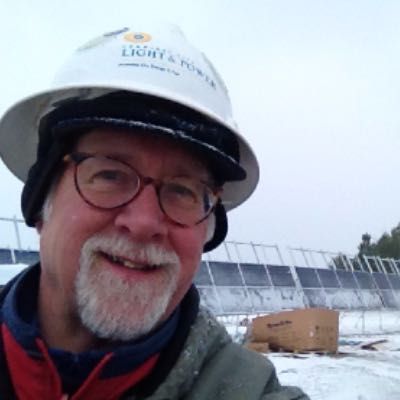 On a cold windy Detroit night, wind energy will be heating the city less than the cost of natural gas. And on a hot summer day, solar energy can cool the city with electric air-conditioning, fans, stored ice and absorption chillers; cheaper than peaking power natural gas turbines. While the solar panels can be placed anywhere inside the local electric distribution system, wind energy will need the transmission arteries that are clogged with financially underwater, subsidized coal and atomic power plants that are an increasing burden on citizens.

On average, wind and solar energy, combined with cheap thermal storage, competes with natural gas and other fossil fuels for heating and power when all costs are accounted for. This can be done mostly with existing electric distribution infrastructure because our electric companies have twice the capacity on average, and three times the capacity at night to deliver electricity into cheap large thermal storage along with increasingly cheap electric battery storage. The cost of such a change will be a fraction of digging up aging leaking gas lines and installing new—and our public service electric utilities can benefit by doubling their electric distribution. It only takes smart controls and smart utility managers.

Many of our electric utilities already deliver off-peak electric energy (kilowatt-hours) at prices competitive with natural gas with the present fleet of electric generation. Now, with the new fleet of high capacity factor wind turbines, wind energy can be delivered for under two cents a kilowatt-hour marginal cost on a windy day, and under four cents on average.

The Illinois PIRG’s study “Tragedy of Errors” on Chicago gas line replacement dysfunction, along with opinion articles in recent years regarding the terrible natural gas explosions and deaths in New York and California, have highlighted the problem with aging and leaking natural gas lines. In some places the gas lines are 100 years old, and on average 50 years old. Mark Bittman, in a New York Times opinion article says repairing gas lines in New York City, estimated by him at $60 billion, is a cost that the citizens can afford, less than the cost of a cappuccino a day to the residents. But why pay it, rather than invest in clean energy while avoiding the costs of natural gas? We do not need to invest $60 billion to repair and replace aging gas lines in New York City or in Detroit; we just need to shut the gas off, avoiding the $60 billion repair expense, environmental and fuel costs. Minneapolis, Cleveland and Chicago can do the same. Now that wind and solar energy will beat the cost of gas, Detroit can displace dangerous aging natural gas lines with cost-effective clean electric power—keeping the gas money in our home pockets while multiplying jobs. This energy can power the new fleets of electric vehicles too, at a much lower cost than gasoline.

Whether from economic, environmental or political reasons, fracking bans and carbon fees, gas and oil pipelines will soon become buried historical artifacts of a fossil fuel age gone by, just like the gaslight pipes buried in old walls, the coal bins and kerosene oil lamps. As some have said “the stone age did not end because we ran out of stones.” Spending another dime on digging up and replacing old gas and oil pipelines is a waste.

Putting clean distributed wind energy into nighttime storage for daytime heating while supplying daylight peak power use with solar and wind is one of the most beneficial earning investments we can make, a modern gold mine. And it’s already in the budget; the money we pay in our utility bills. Pay for heat and power from fossil fuels and pipelines or pay for cheaper wind and solar—you pick. This will accelerate and pave the path to 100 percent renewable energy--saving $100 billion or more just for cities like Detroit, Minneapolis, Cleveland, New York City and Chicago.