Opinion | Real funding is down for Michigan schools. Thanks, DeVos family

Guest Commentary
Opinion | Real funding is down for Michigan schools. Thanks, DeVos family 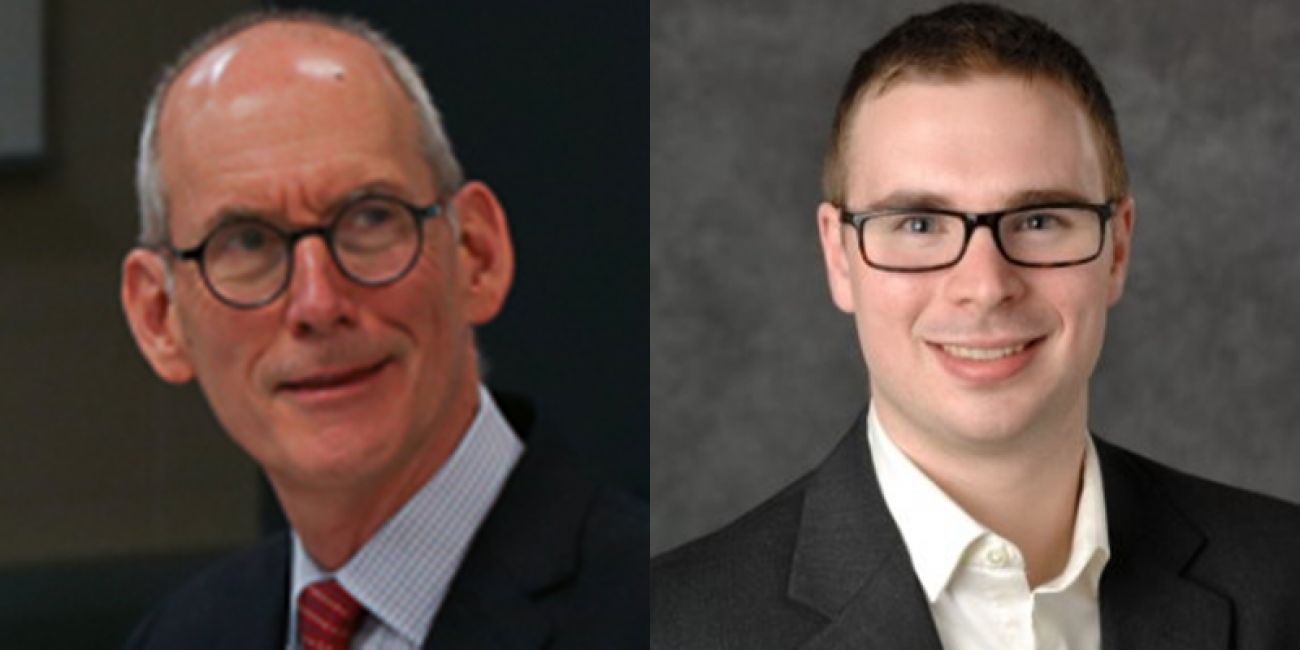 Michigan’s GOP lawmakers just advanced a budget that makes little progress in establishing adequate school funding. Since Betsy DeVos’ appointment as U.S. education secretary, most of the country now understands her family’s dominant influence over Michigan’s Republican Party and, consequently, the state’s education policies. Will the party’s rejection of adequate funding for Michigan schools help or hurt their election prospects in November 2020?

The interactive map below shows the 2004 to 2018 changes in total general fund revenue and per-pupil foundation grant for every district, adjusted for inflation.

How far has your school funding declined?

Inflation-adjusted funding for Michigan schools is down in almost every district. Click on the binoculars to find your district.

Every district’s real (inflation-adjusted) per-pupil foundation allowance declined over the last 15 years. The median district’s foundation decreased by 24 percent. The vast majority of districts also suffered substantial drops in total revenue, which is why so many have been forced to cut services they know students need and parents want.

As the map reveals, many of the largest declines have occurred in rural and suburban areas where most citizens like their local public schools and view them as foundational to community life. These areas have disproportionately elected Republican legislators. Yet public school funding cuts, charter schools, and vouchers don’t resonate with most of their citizens.

Earlier this year, we released a report that documented striking inadequacies in Michigan’s school funding. Since the 2002 federal No Child Left Behind Act launched the test-based accountability era, Michigan’s total and per-pupil school funding growth ranks dead last among states.

Our report also documented how, in contrast to most other states, Michigan has spectacularly failed to adjust funding to cover the costs schools face in serving high-needs children, including those with disabilities, those living in poverty or who are English-language learners. Everyone understands that it costs more to educate children with serious disadvantages, many living in rural areas, to the same learning standards as more advantaged students.

Her proposals did not fare well with the Legislature’s majority, where despite growing evidence of service cuts in cash-strapped schools, leading GOP lawmakers maintained that school funding has never been higher!

This claim is based on year-to-year changes in state School Aid Fund revenue. It does not adjust for inflation, even though all economists agree that meaningful comparisons of financial data over time must adjust for inflation. It also does not account for the 7 percent of SAF revenue that are no longer devoted to K-12 education.

The figure below places Michigan’s current budget negotiations in historical perspective. It includes all general and special education fund revenue received by Michigan’s local and intermediate school districts and charter schools from all sources: federal, state and local. The figures are adjusted for inflation. 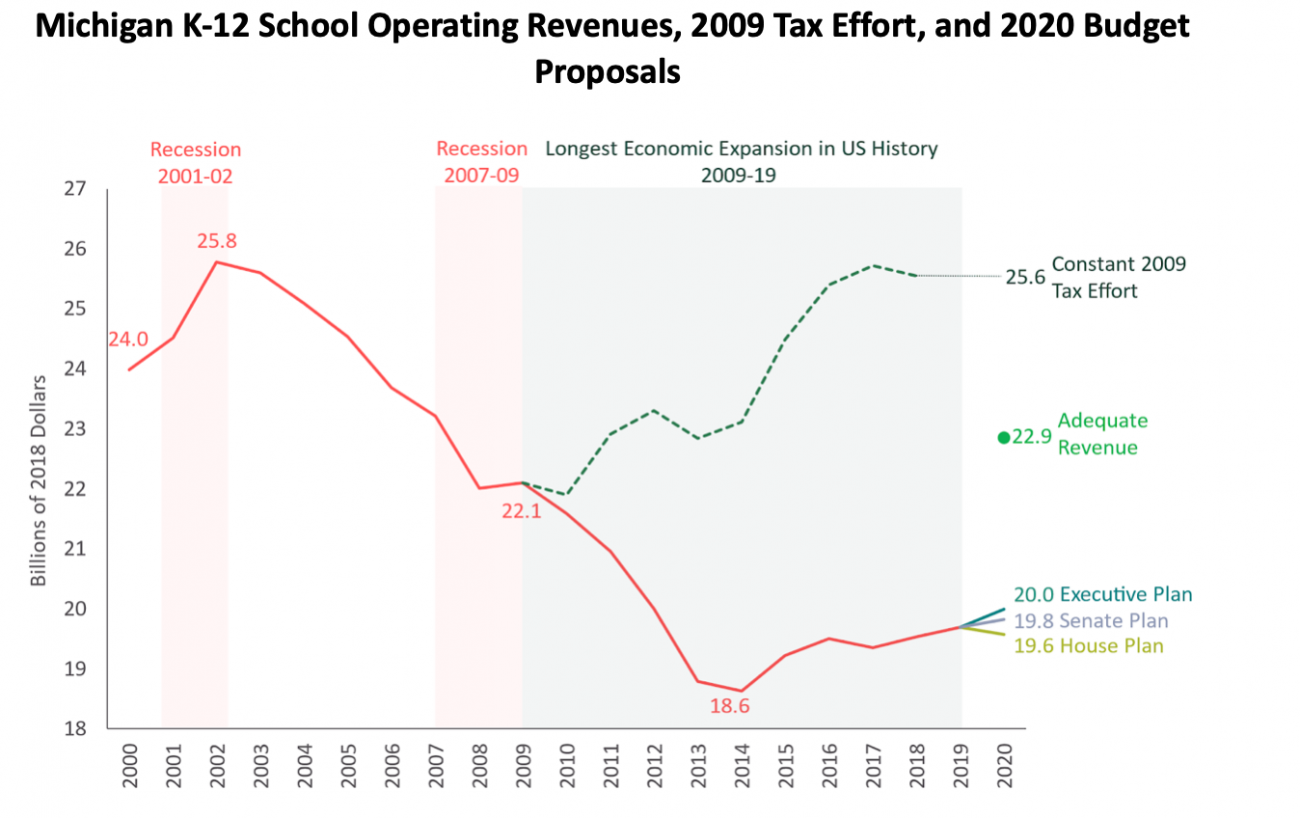 Funding fell sharply for a dozen years after 2002, before increasing slightly since 2014. After a decade of economic expansion following the 2008 recession, 2018 funding remained 24 percent below 2002, and per-pupil funding fell 12 percent.

A recent Citizen Research Council report on teacher pay noted that since 2014 nominal per-pupil spending increased 12 percent (only 3 percent after adjusting for inflation).  Rising retirement contributions (from 12 percent of payroll in 2002 to 26 percent today) do indeed squeeze district budgets, but the figure above clearly reveals that they are not the primary reason for our long-term funding decline. This is because (as in the map above) retirement contributions are included in the revenue trends. If they were excluded the decline in schools’ resources would be even greater.

Our funding decline is due to a large and continuing drop in the share of our state economy that we devote to education, in other words, a sharp decline in our education investment rate.

As the figure shows, this long-term disinvestment dwarfs the scope of negotiations over the 2020 budgets advanced by the governor, House, and Senate. The figure also shows the revenue needed to implement the SFRC’s recommendations, as well as the revenue that would be generated if Michigan had continued to devote the same share of its income to K-12 schools as it did in 2009.

Significantly, if Michigan had maintained the 2009 investment rate, or tax effort, our schools would have $2.5 billion more revenue than necessary to reach the SFRC’s adequacy recommendations.

Lawmakers seem poised to pass a budget that increases education spending at about the rate of inflation. That’s a reasonable target once adequate funding is achieved. But Michigan is still far from establishing an adequate funding system.

If current legislators are unable or unwilling to buck the DeVos agenda and adequately fund Michigan schools, Michigan citizens will have an opportunity to elect those who will in fall 2020.