A-10 aircrafts from the Selfridge Air National Guard Base are among those that would frequent proposed new airspace over Northern Michigan and the Thumb. (Michigan National Guard)
December 7, 2022
Kelly House (Email)
Michigan Environment Watch
Rural Michigan, Great Lakes

The Michigan Air National Guard wants to expand its airspace over the northern Lower Peninsula, Thumb and Lake Huron, allowing military aircraft to fly further, more frequently, and lower overhead and irking residents of Up North communities that already face a proposed expansion to the military's land footprint.

The newly-proposed airspace expansion would add another 1,633 nautical square miles to the complex, which spans roughly from east of I-75 near Grayling, up to Huron Beach along the far northeastern shore of the Lower Peninsula, throughout the thumb to the Port Sanilac area, and into Lake Huron. (A nautical mile is 6,076 feet, compared to 5,280 for a standard mile.)

The proposal includes expansions and more intensive use of the airspace above the Grayling area and the Thumb. It comes as the Michigan Army National Guard, a separate branch of the state-based military force, is seeking access to state land near Grayling and surrounding communities to double the footprint of its Camp Grayling military installation.

Area residents, environmental groups and outdoor enthusiasts were already “extremely upset” about the proposed land expansion, said Joe Hemming, president of the outdoor group Anglers of the Au Sable. “But this airspace thing is arguably going to have a larger impact over the area and over the community.”

Impacts in the forested region near the Au Sable would include nearly 1,800 aircraft flights that are currently confined mostly to a narrower strip of restricted airspace. The new plan would allow those aircraft to fly further and lower overhead, resulting in more noise and emissions in a region that already contends with the sounds of aircrafts and artillery fire from troops training at Camp Grayling.

The Guard currently uses that restricted airspace near Grayling, along with a bigger temporary airspace of 869 square nautical miles that it must submit annual requests to use. During about a two-week window of operations each year, an average of 309 aircraft flights, called “sorties,” operate for a total of 68 hours over the temporary airspace, dipping no lower than 5,000 feet above sea level, according to the Guard’s analysis.

A new, permanent airspace would replace that temporary one, expanding it to 918 square miles. The Guard estimates major increases in the number of flights over the area and the amount of time planes spend flying there — up several hundred hours annually. Some would fly as low as 500 feet, under the plan.

One flight path would allow planes to dip down to 300 feet for occasional travel between the Grayling Air Gunnery Range and Alpena Combat Readiness Training Center.

In the Thumb, three new low-altitude training areas would be added beneath an existing flight zone that allows planes to travel no lower than 6,000 feet. Planes in a portion of the new flight zones would be allowed to dip down to 500 feet. 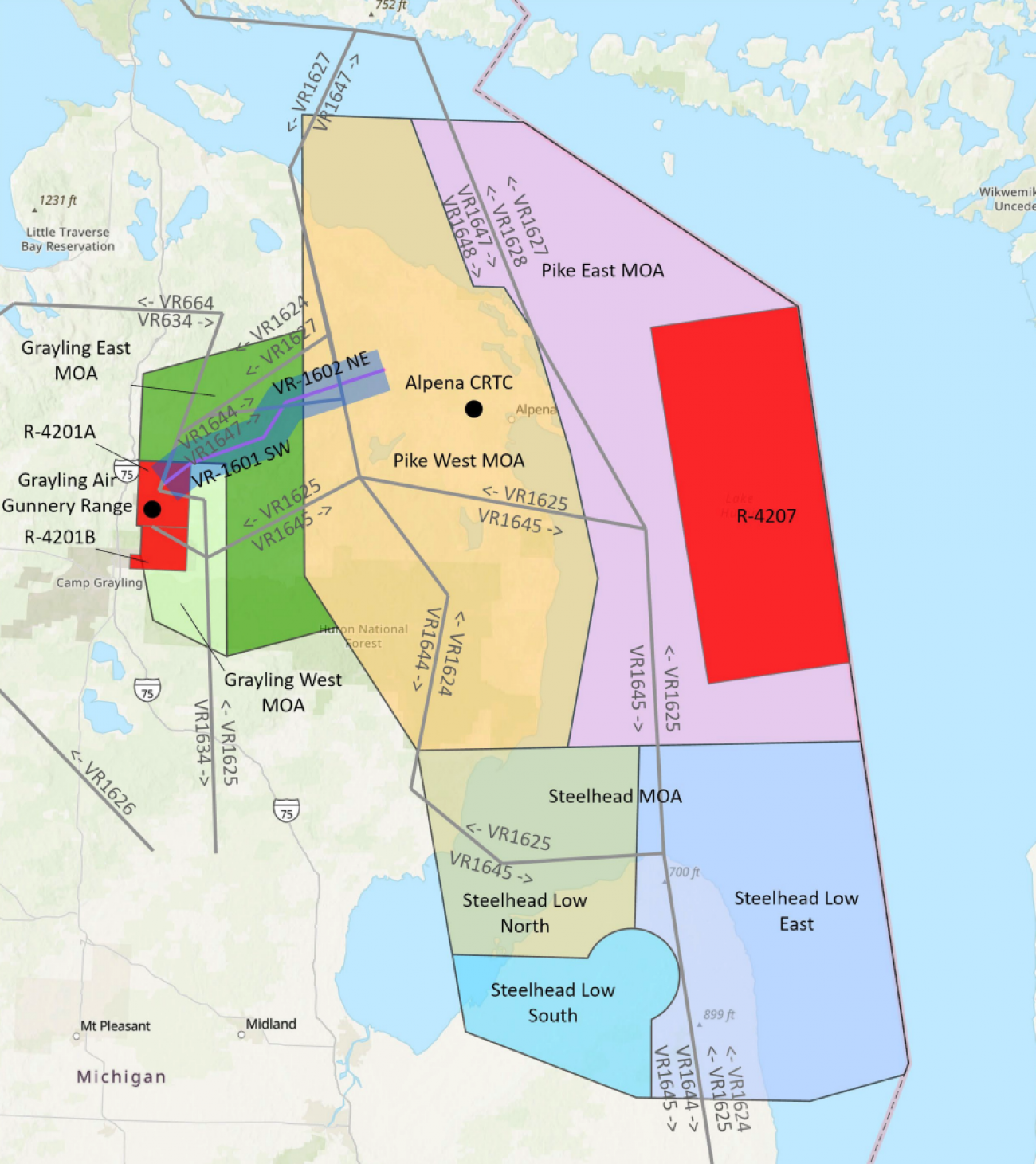 A map of the proposed new airspace zones in northeast lower Michigan and the Thumb, as shown in the Guard’s draft environmental assessment of the plan.

Bill Collins, executive director  of the Thumb Land Conservancy, said he recognizes the need for military training access, but wants it to be done in an environmentally responsible way. For now, Collins said he hasn't formed an opinion on the proposal, though he has concerns about noise and other issues.

"Obviously we all think that protection of wild areas is important," he said, "and if there's a way for them to do what they feel they need to do and not impact those areas, then great."

The Guard released details of the proposal in a 110-page environmental assessment on Nov. 14, initiating a public comment period the next day that ends Dec. 15.

The Guard acknowledges its proposal would bring more noise, emissions and “chaff and flare,” a term for substances expelled from a plane to distract incoming missiles. But it contends such impacts to people and the environment would be insignificant.

“What they choose to overlook completely,” said Hemming of Anglers of the Au Sable, “is how contrary this is going to be to outdoor tourism, the local economy, real estate values. Who the heck wants to buy a piece of property where you’re going to have jets flying overhead on a regular basis at low altitudes?”

It all frustrates 67-year-old Jacque Rose of Whittemore, who sits on the Anglers of the Au Sable board. Rose said her windows already rattle when military aircraft pass by on their way to exercises such as the annual Northern Strike. But Rose said she’s more concerned about water, plants and animals in and near the Au Sable River, where she regularly fishes and boats.

The Guard’s analysis indicates that chaff and flares released from aircraft would increase by thousands yearly. The military branch concluded that its increased flight activity “would not have adverse effects on water resources,” but Rose said she is skeptical.

“The Au Sable is a wild and scenic river system,” she said. “It needs more protection, not less.”

She contends the river and its surroundings are already under enough pressure from the Michigan Army National Guard’s request to lease 162,000 acres of state land across several counties as it seeks to double Camp Grayling’s footprint.

Supporters tout the need for a well-trained military and possible economic gains from troops staying in the area for training, while offering assurances that the new uses at Camp Grayling would be low-impact.

The Michigan Department of Natural Resources is still evaluating the land proposal, agency spokesperson Ed Golder said. If the agency’s top brass agrees to move forward, both the DNR and the military will begin a review process that could yield a final decision late next year.

Golder said the DNR plays no part in the Guard’s airspace proposal.

Hemming said his group was blindsided by the new airspace proposal, which never came up during months of meetings with Guard officials about the proposed Camp Grayling expansion.

“There was not a peep,” Hemming said. 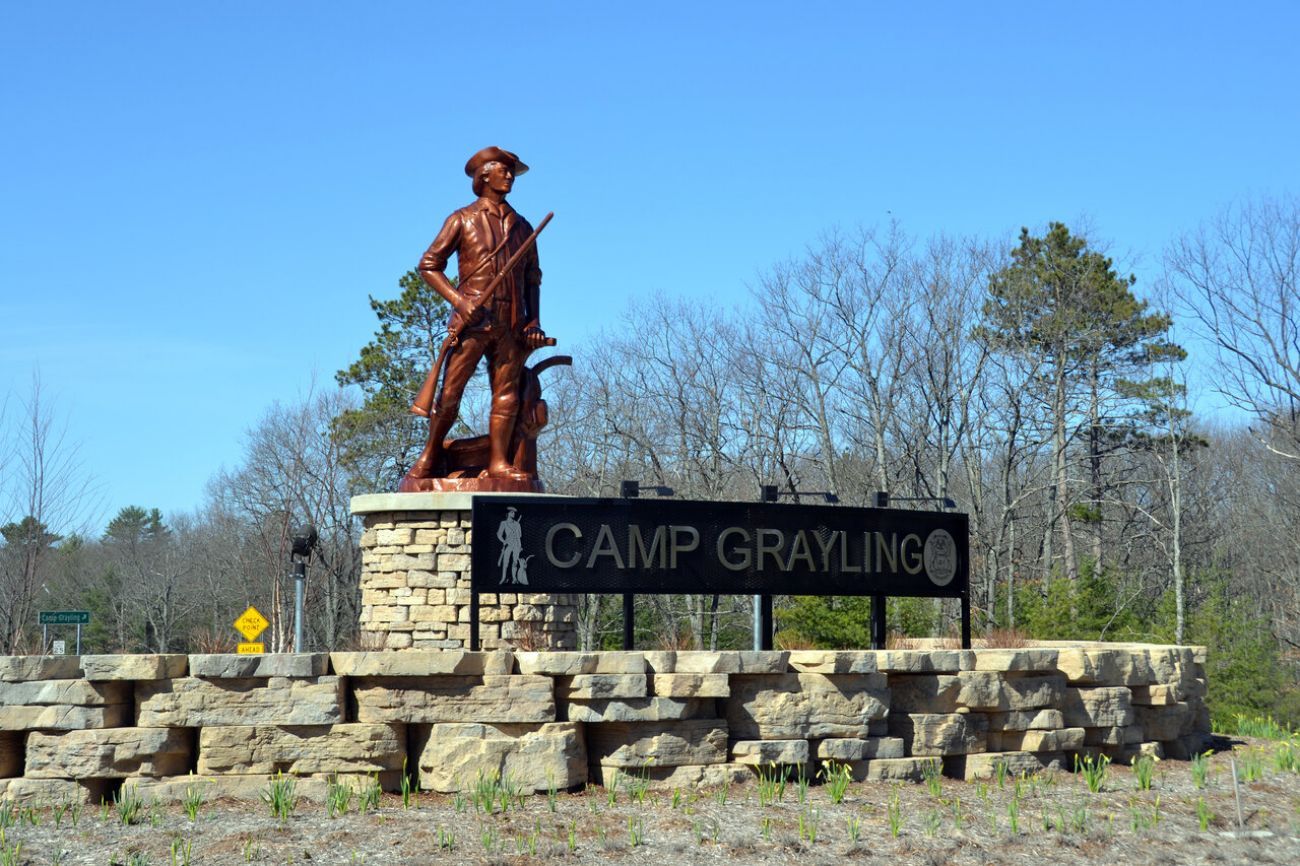 Residents in the Grayling area are already raising concerns about a proposed doubling of the footprint of Camp Grayling, a Michigan Army National Guard training area in Northern Michigan. (Michigan National Guard)

Layton contends that military officials have held “a number of public meetings” on the proposed air expansion, which they began eyeing in 2014 before releasing an earlier draft proposal in 2019.

“It’s certainly not a secret,” he said.

Public input on the earlier version of the air expansion prompted the Guard to make changes before reopening comment in November. Among them: Prohibiting military flights lower than 1,500 feet along a mile-wide shoreline buffer during peak tourism season in the Thumb; raising the altitude of flights over portions of the Thumb and Grayling area, and eliminating six miles of airspace from the Grayling area.

“We have worked hard to thoroughly coordinate this reconfiguration at the national, state and local levels for the sole purpose of ensuring our military aircrews are prepared for the rapidly evolving complexity of modern combat,” said a November statement from Brig. Gen. Bryan Teff, assistant adjutant general and commander of the Michigan Air National Guard.

The Alpena Special Use Airspace, originally charted during the Korean and Vietnam war era, is considered the largest overland training airspace east of the Mississippi, according to the Guard. But officials say it’s not big or complex enough for pilots to practice modern military tactics.

According to the Guard’s environmental assessment, pilots in the changed airspace would conduct training including “tactical combat maneuvering by fixed-wing and rotary-wing aircraft involving abrupt, unpredictable changes in altitude, and direction of flight.”

There would be no supersonic flights or firing of weapons or ordnance over military operations areas. Layton said low-altitude planes from Toledo and Selfridge would save time and money by being able to train in the Thumb.

“The proposal would also update the airspace to satisfy training requirements for modern, 5th Generation aircraft like the F-22 and F-35, which typically operate at very high altitudes,” he said.

Opponents of the proposal are calling on the Guard to extend its public comment period, arguing a month is not enough time to digest the highly-technical document that was released on the first day of Michigan’s popular two-week firearms deer hunting season.

“It’s completely insufficient,” said Rose. “It took me two weeks just to get through this report.”

After the comment period closes on Dec. 15, the Guard will begin a 45-day review before issuing a final report early next year. The Federal Aviation Administration ultimately decides whether to allow the expansion. FAA officials did not respond Wednesday to a request for comment from Bridge.

Layton said if the proposal gets FAA approval, the airspace changes could be in place by late next summer.