“I know we’re not going to win everyone over,” said Col. Scott Meyers, commander of the Camp Grayling Joint Maneuver Training Center. “I get it.”

But Meyers cited a proposed 1,500-foot buffer around rivers and lakes as the kind of concessions the military is willing to make to reassure area residents and outdoor enthusiasts who worry that noise, environmental damage and other consequences could follow any increased military presence in the woods surrounding Camp Grayling.

Consternation has been brewing since early May, when Michigan Department of Natural Resources officials began notifying locals that the National Guard wants to lease 162,000 acres of state-owned land across several counties, more than doubling its current training grounds. The Guard says it needs the land to make Camp Grayling a destination for year-round cyber, electronic and space warfare training.

A Wednesday public meeting on the plan remained mostly civil, with more than 200 attendees sitting quietly while a facilitator read written audience questions and a panel of DNR and National Guard speakers responded.

Among dozens of questions posed to the panel:

Why doesn’t the proposal include a buffer around dwellings?

“I don’t have any problem with adding that type of buffer,” Meyers said, so long as troops can still access nearby roads.

How much will Camp Grayling pay per-acre for the lease of this property?

“We won’t pay for it,” Meyers said. The National Guard will lease the land for free, he said, chipping in some money to help with expenses such as trimming trees and managing species.

What prevents the base from using the land for other purposes in the future?

“Anything they want to do on lands that they lease from us has to be vetted through our process,” said Tom Barnes, manager of  the DNR’s Grayling Forest Management Unit.

Others questioned how the military’s expanded presence would affect their property values and the economies of towns near the proposed expanded training zone. The expanded zone passes through multiple small townships and would bring the Guard’s footprint closer to the communities of Houghton Lake and Higgins Lake. Still others wondered what kind of environmental impacts could come from the military’s presence. 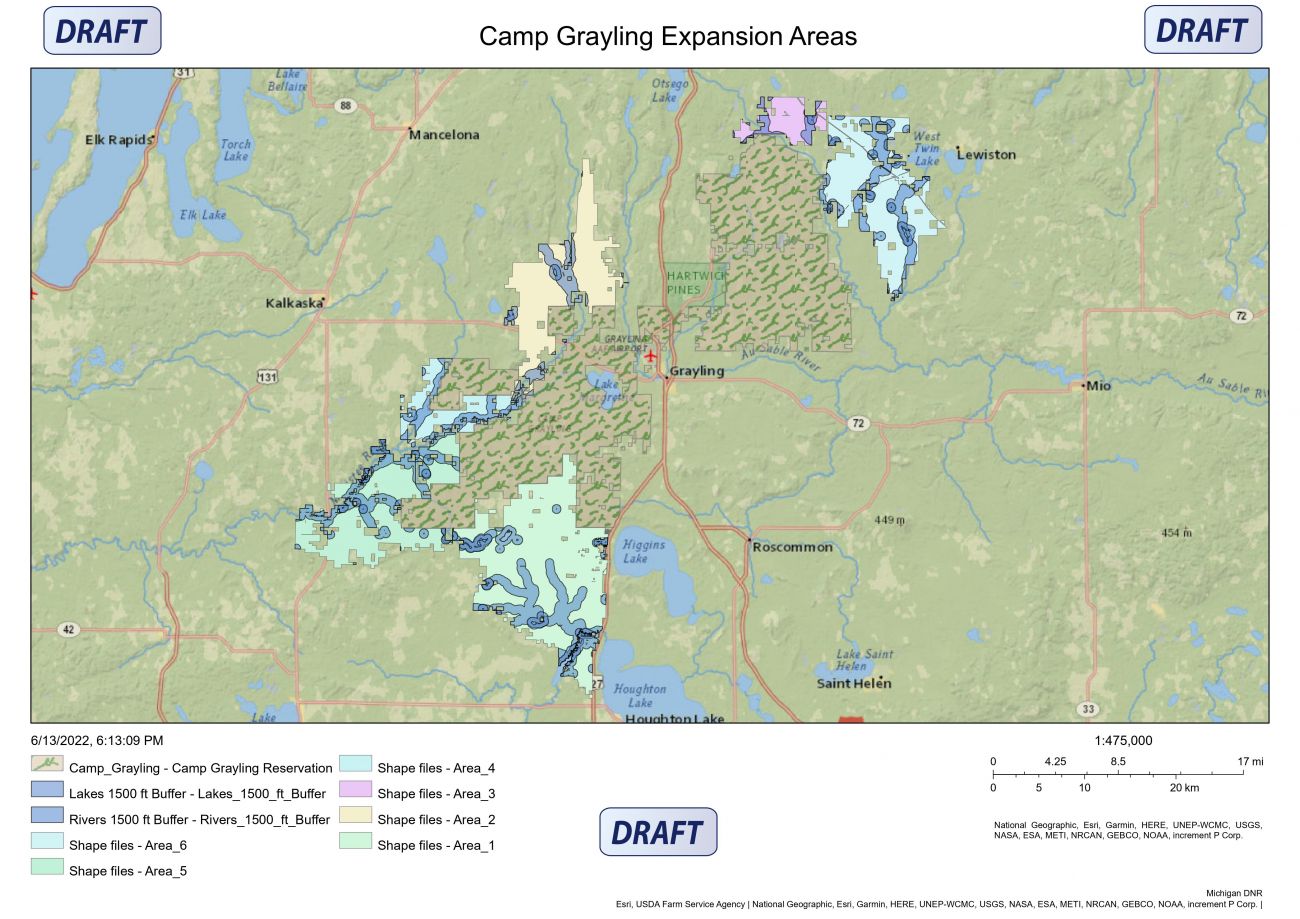 This map shows the borders of a proposed Camp Grayling expansion that would allow the National Guard to access another 162,000 acres of state land for low-impact military training. (Courtesy of Michigan DNR)

At one point, an audience member shouted for opponents of the plan to raise their hand. Dozens shot up, but more remained down.

National Guard and DNR officials have described activities planned for the proposed expansion area as “low-impact,” with no live fire, road-building or other permanent alterations to the landscape. And crews would use none of the firefighting foam that has been linked to PFAS contamination on military bases in Michigan, including Camp Grayling.

The military would sometimes close areas to the public while troops are training, but military officials have said such closures would be temporary, infrequent and confined only to areas where troops are active.

“We have no intent of training in your backyard,” Meyers said, adding that troops “would rarely be seen by any of you.” 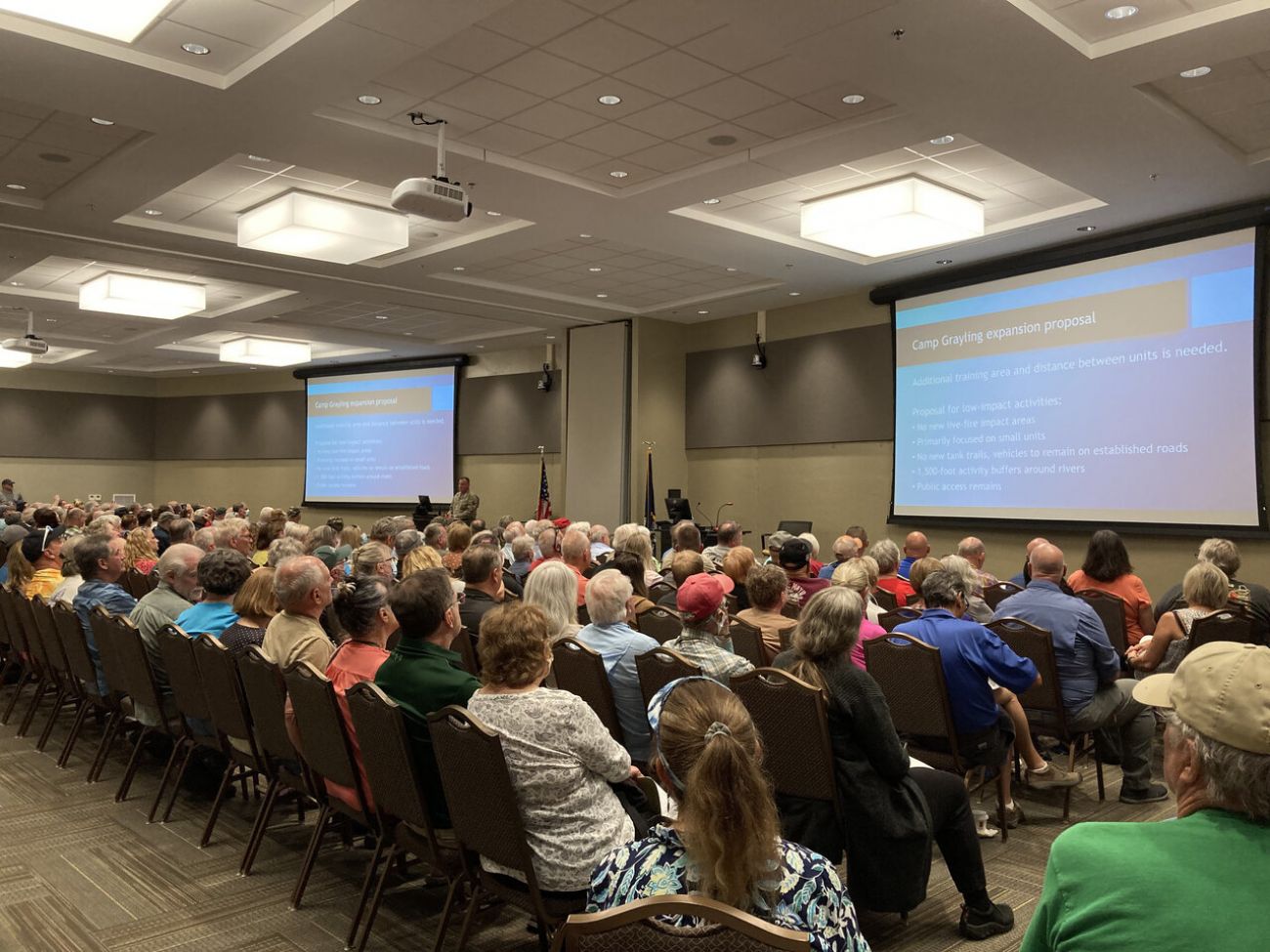 Joe Hemming, president of the nonprofit Anglers of the Au Sable, an influential outdoors group, said he remains “very, very concerned” despite those reassurances. Hemming said his group would like larger buffers around waterways, and more specifics about how the military would use the land, and where.

And, he said, he wants proof that the military is unable to conduct its planned exercises on its existing 148,000-acre landmass.

“They’ve got an enormous footprint right here, right now as we speak,” Hemming told Bridge. “Are there lands that are not utilized all of the time?”

The facility east of I-75 in Northern Michigan is already the nation’s largest National Guard training facility. In addition to its current footprint, it controls 337 square kilometers of restricted airspace in Crawford, Kalkaska and Otsego counties. Most of that property is state-owned land the military has leased for decades.

The proposed expansion includes large tracts to the north, south, east and west of the existing camp, including parcels adjacent to the popular Au Sable and Manistee rivers.

DNR officials told the crowd gathered Wednesday that any military activity would be allowed to come no closer than 1,500 feet (a little over a quarter-mile) from those rivers and other waterways.

Barnes of the DNR said that buffer, which was added to the proposal after local river groups raised concerns about how troop movements would impact area rivers, “may increase.”

The DNR would still own and manage the land, while the military would hold a 20-year lease subject to annual review.

If DNR Director Dan Eichinger approves the proposal, both the DNR and military will begin a review process, followed by more public input and an eventual decision by Eichinger. Barnes said he expects the process to be done by the end of 2023.

“We’re like at step two of about a thousand,” Barnes said.

The DNR is accepting public comments to its online map of the proposed expansion area through the remainder of its review.