HASLETT — Sitting in his living room decorated with lake-themed decor, Howard Tanner recalled the ruckus he inherited when he became director of the Michigan Department of Natural Resources in 1975 — the outcome of which would shape state conservation efforts for decades.

The battleground: the Pigeon River Country State Forest, more than 100,000 acres of rugged terrain north of Gaylord that a young Ernest Hemingway called “wild as the devil and the most wonderful for fishing that you can imagine,” and conservationist P.S. Lovejoy dubbed “The Big Wild.”

Petroleum companies wanted to tap the Antrim Shale, an oil-and-gas-rich formation deep below the pines and hardwoods. They had purchased drilling rights from the state, but the first company that drilled made a mess, tearing up the forest to build pipelines, a processing station and 65-foot-wide road. Activists were up in arms.

“The feces hit the water,” said Tanner, 94, who is now known as the godfather of Michigan sport fishing. “It was a major, major upheaval.”

Related: Search database to find Trust Fund projects near you

The companies had legal rights to drill, but environmental advocates and some state officials worried about damage to the landscape and its vulnerable elk population. The DNR and its Natural Resources Commission had to referee a squabble that would turn dirty — an oil and gas lobbyist would send a prostitute to a state official’s bedroom overnight “every time there was a meeting,” Tanner recalled. 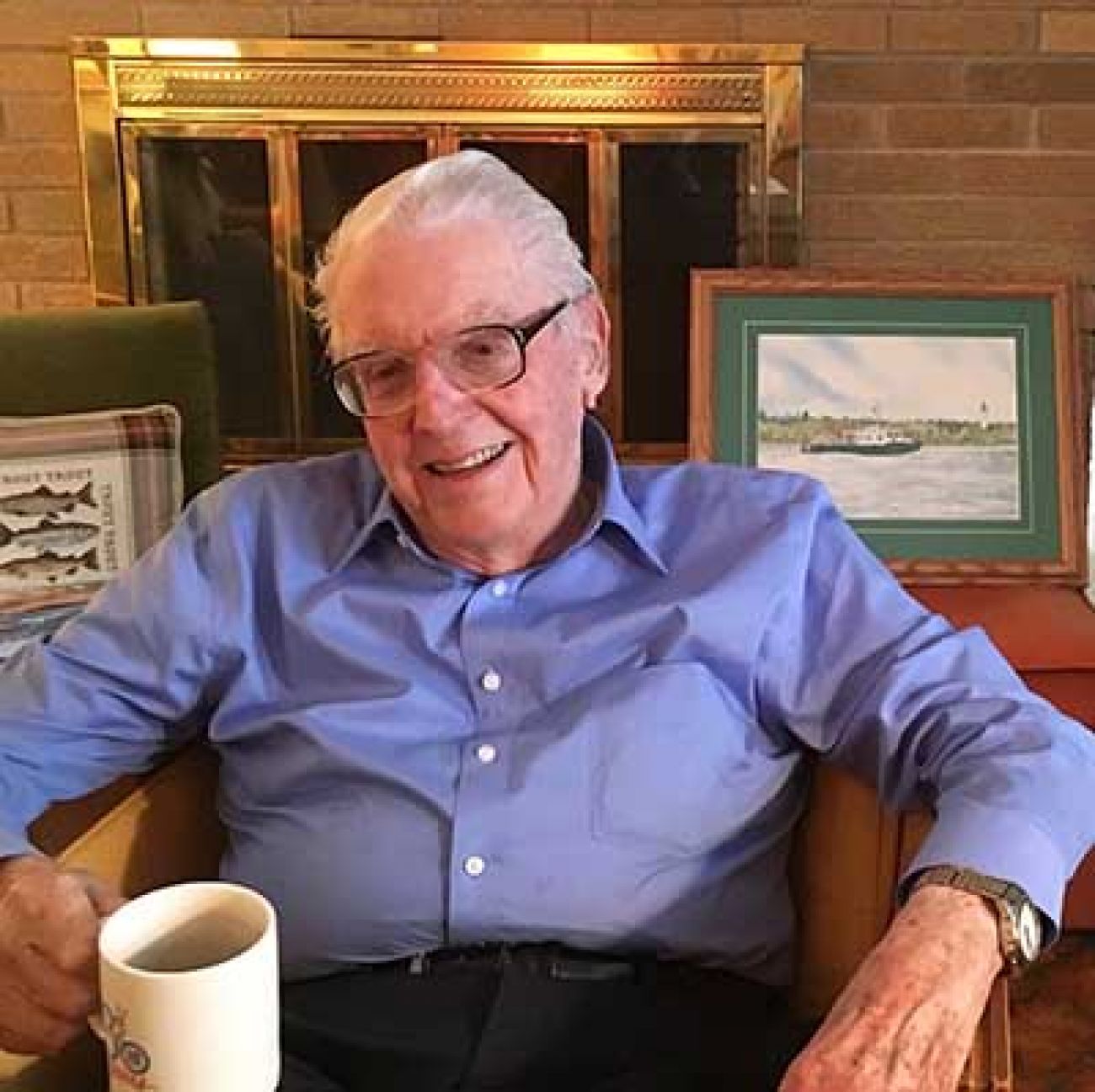 What resulted was an extraordinary compromise. Drilling could continue under tightly controlled conditions in the southern third of the forest, and the state’s royalties from any production would fund conservation efforts.

Thus was born the Natural Resources Trust Fund, which is unique nationwide and has since doled out more than $1.1 billion from oil, gas and other mineral royalties to protect, expand and develop public lands in every Michigan county. The fund’s projects stretch from the banks of the Detroit River to the Superior Forest Partnership Project that conserves more than 14,500 acres of forestland in Marquette County.

Related: Michigan's Great Lakes are good, but water concerns include lead and Line 5

“I don’t know of anybody who disagrees with the concept of the trust fund, how good it is,” said Sen. Tom Casperson, R-Escanaba, chairman of the Natural Resources Committee. “We’re taking from extraction industries that — once it’s gone, it’s gone — and leaving a wonderful legacy behind for generations to come. The money’s rolling.”

Rolling indeed. The fund in 2011 hit its constitutionally set cap of $500 million, fueling debate about what to do with excess royalties and whether to change the way trustees weigh projects.

Michiganders could see major changes this year.  Casperson is pushing an overhaul that would more fully wall off trust funds from the lawmakers and free more money for development projects on public lands. Doing so would amend the state constitution. That would require approval from two-thirds of the Legislature and the majority of voters (possibly this year).

The measure has backing from the Nature Conservancy, a conservation group that more often spars with Casperson, a pro-industry, anti-regulation senator.

Related: Senator wants to defang the ‘radical’ Michigan DEQ. He just may do so.

“If we can put all of this together it would be a pretty big deal,” said Richard Bowman, director of government relations with the Nature Conservancy. “If we can dedicate the state’s mineral wealth in perpetuity for our kids and our grandkids, that’s a pretty damned good legacy.”

The fund has often been subject of a political tug-of-war, and no one is predicting enacting the changes will be easy.

“I’m not going to get everything I want,” Casperson told Bridge. “You cannot lift something like this without everybody at the table.”

Here’s how the trust fund works: Municipalities and other government entities apply for grants to purchase land for public use or develop it for recreation, DNR staffers score those applications based on a set of criteria and a five-member trust fund board generally recommends the highest scorers. Those recommendations go to the Legislature, which approves them.

More than 2,300 projects have received funding over the decades. They run the gamut from big-ticket items like the $7 million extension of Saugatuck Dunes State Park in 2011 and $4.3 million purchase of lake frontage along Bay Harbor in Emmet County to the construction of scores of of development projects for ballfields, boat launches, trails and parking lots on public lands.

Related: Search database to find Trust Fund projects near you
Related: See the board’s 2017 recommendations for acquisition and development projects.

Since 1976, the fund has gone through periodic changes to prevent lawmakers from raiding it for pet projects. Currently, the fund can collect up to $500 million in royalties. Excesses go to a separate fund, the State Park Endowment Fund, which helps pay for park operations and is capped at $800 million. The fund now sits at $256 million.

And if drilling surge fills up the parks fund? Lawmakers would get what spills over. 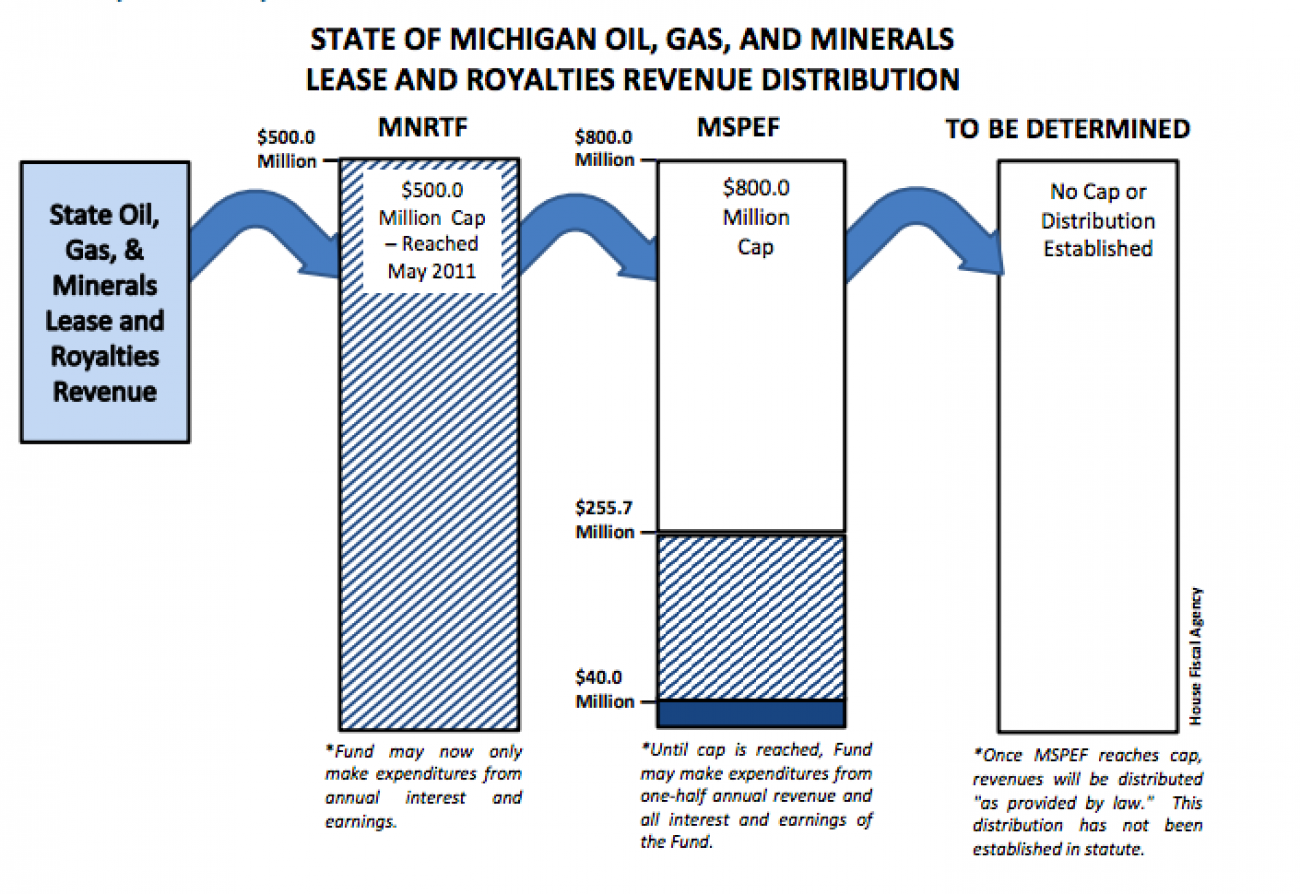 That’s never happened, and Casperson and others want to ensure it doesn’t.

Introduced last month, his legislation  — Senate Bill 763 and Senate Joint Resolution O — would keep that money out of lawmakers’ hands and allow any excess parks funds to flow back into the Natural Resources Trust Fund.

The legislation also addresses another long-standing issue. Trustees say they are hamstrung by limits on spending for development projects; current law says no more than 25 percent of spending can fund such efforts. The rest must go to land buys.

As a result, most land purchase proposals get approved, but well-rated development ideas get short shrift, said Bill Rustem, a board trustee and longtime Republican environmental policy adviser.

The DNR, for instance, bought land in Alpena long ago for a state park, but the project is too costly to qualify for trust fund grants, Rustem said.

Over the past decade, the trust fund board greenlighted 78 percent of land purchase applications compared to 46 percent of development proposals, according to the DNR.

“There will still be money for those big iconic land deals when they've got to be done, but we still have to address this issue of developing recreational facilities,” said the Nature Conservancy's Bowman. “The best way we get support for public land and natural areas is getting people out there to enjoy them.”

Other environmental groups — including The Michigan League of Conservation Voters and Michigan Environmental Council — favor portions of Casperson’s bill, but are waiting to stake their positions. Some have expressed concerns about a separate bill that jolted closer to Gov. Rick Snyder’s desk last week.

It would require a new five-member board — the governor, treasurer, Senate majority leader, House speaker and a board-appointee — to determine how much trustees could spend in project categories each year.

The legislation addresses arguments from some lawmakers that the trust fund board has been too conservative and funded fewer projects than law allows. Those lawmakers unsuccessfully pushed a measure last year that would have funded 43 projects — at $7.7 million — atop what the board recommended, an effort that Attorney General Bill Schuette ruled did not pass constitutional muster.

Speaking at a House committee hearing in October, Hildenbrand said the change would smooth the grantmaking process, making it similar to how the state sets its overall budget.

“It was a way to kind of get in front of the process, get the Legislature’s involvement, and then have an agreed upon amount that would be expended through the grant program,” he said.

Dormant for months after passing the Senate in September, SB 551 narrowly cleared the House last week. If the chambers reconcile slightly different versions of the bill, it would go to Snyder.

Hammond said the bill’s sudden movement makes him skeptical about what Casperson’s legislation will look like as it winds through the Legislature — and wary of lawmakers’ true intentions.

Thinking back upon the Pigeon River battle so many years ago, the DNR’s Tanner recalled that few folks were initially pleased with the results, even if they’re now considered a landmark achievement in Michigan’s environmental history.

“Not everybody was happy. In fact, I don’t think anybody was totally happy,” Tanner said. “Maybe that’s the sign of a good agreement.”

Tanner’s not quite sure what to think about the latest slate of proposals to overhaul the fund, but they deserve plenty of scrutiny, he said.

“I’ll be nervous until this is settled. Hopefully in the right manner.”