Under a new federal permit program that took effect this year, Michigan officials can kill up to 9,650 cormorants and destroy up to 1,400 nests in hopes of keeping fish out of cormorants’ bellies and on Michigan anglers’ fishing hooks. (Bridge file photo)
August 15, 2018
Peter Payette
Michigan Environment Watch
Rural Michigan, Upper Peninsula

In 2004, there were almost 1,800 double-crested cormorant nests on Goose Island, a strip of land in northern Lake Huron about 500 feet wide and less than a mile long.

Two years later, there was not one.

Francie Cuthbert, an ornithologist from the University of Minnesota who visited the island then, says it was like a ghost town. “It was totally silent,” she recalls. “There was nothing there.”

Goose Island, about 10 miles northeast of Mackinac Island, had been a popular place for colonial waterbirds to nest in the Great Lakes, and not just cormorants. Blue herons and night herons nested there, as did herring gulls.

The birds had been chased off by racoons, brought to the island in a boat by Chet Romanik, a hunter from Cheboygan. 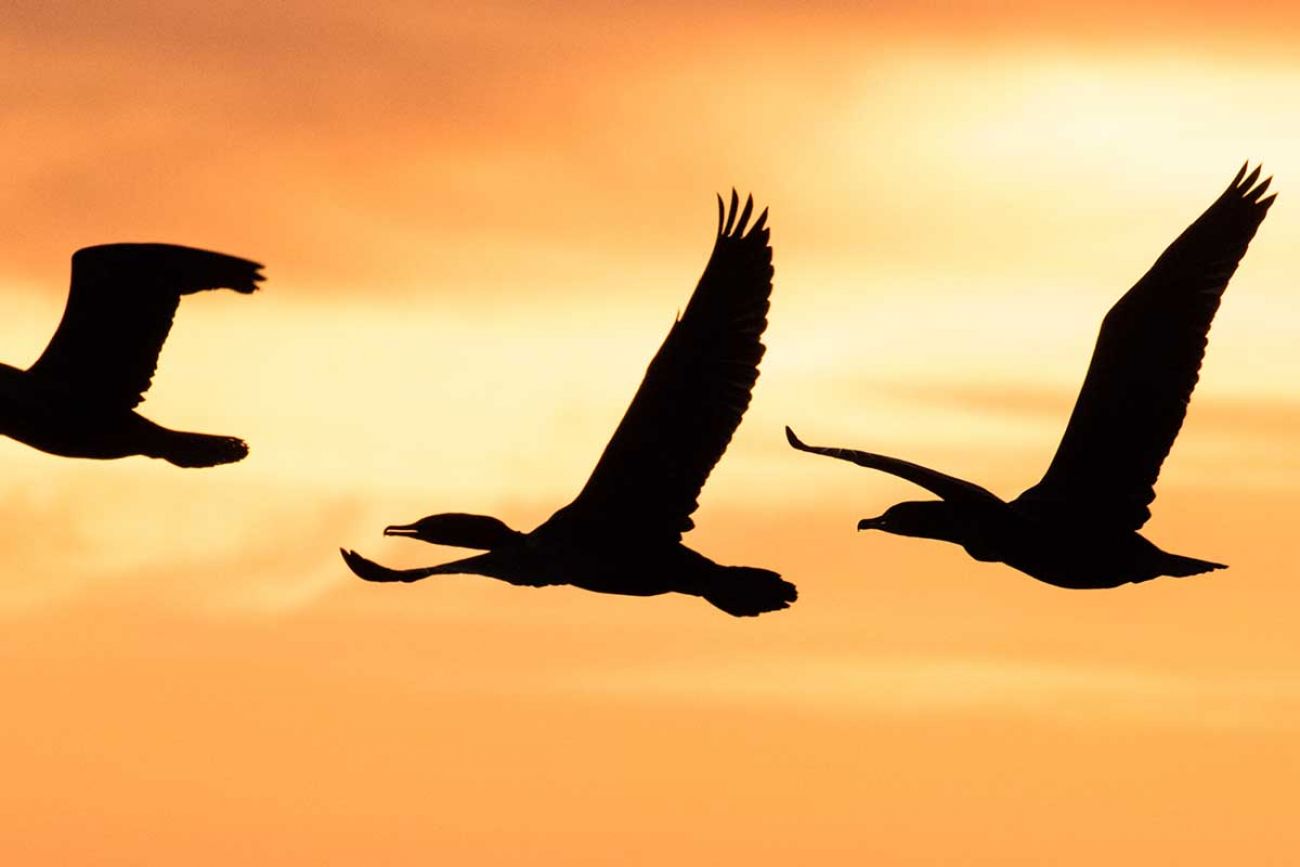 When Romanik saw the cormorant colony on Goose Island, he saw a threat to one of his favorite places to hunt rabbits. Cormorants destroy vegetation with their acidic feces. A large colony could turn a forested area into open sandy place with no cover for a hare.

So Romanik released more than 30 racoons on the island over two years, after keeping them on a strict diet of chicken eggs. The racoons would not harm adult birds, but they would raid their nests for eggs and chased every colonial waterbird from the island.

Romanik is proud of what he did. “I did it to preserve the island,” he says.

The view that double-crested cormorants are an invader that threaten the natural integrity of the ecosystem is a common sentiment in upper Michigan. Lethal control of the birds to protect wild fish was authorized by the U.S. government for many years ‒ though not through raccoon militias. The control reduced cormorants in the region by about two-thirds. Anglers and congressmen are now renewing calls for lethal force.

Cormorants are large, glossy black birds. They’re found all over North America and nest in the spring on remote islands in the Great Lakes. During breeding season, their throats are bright orange and their eyes emerald green. That’s also when the tufts appear that give them the name double-crested.

Cormorants have big webbed feet and are built to swim. They can chase fish in 100 feet of water. Because they eat a pound of fish a day, they create conflict in coastal communities where people depend on fish for their livelihoods. (Though in Asia they are trained to catch fish for their owners.)

Even James Audubon had a mixed reaction to cormorants. He wrote that they ate and defecated “inordinately” and had no song to charm, only grunts. 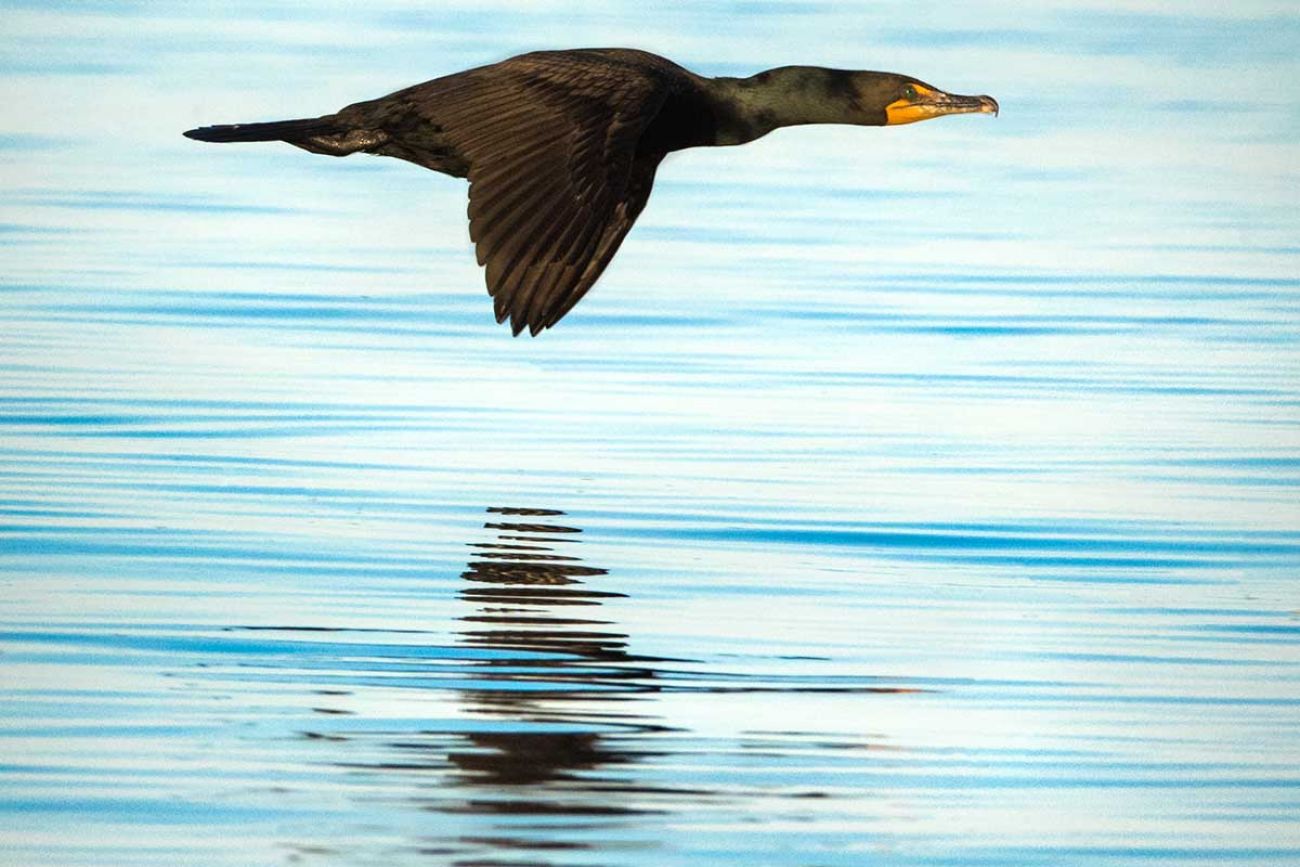 Double-crested cormorants were decimated nationally in the 20th century by the use of toxic pesticides like DDT.  Banning these chemicals and adding the bird to the Migratory Bird Treaty Act allowed their numbers to rise dramatically in the 1980s and 1990s. The population in the Great Lakes went from a few thousand birds in the 1970s to a peak of 115,000 nesting pairs around 2000.

The dramatic rise was seen as an invasion ‒ even though the bird’s native range includes the Great Lakes ‒ and a threat to popular sport fish like perch and bass. In the Les Cheneaux Islands, some research shows that the collapse of the yellow perch fishery around 2000 corresponded closely with rising cormorant numbers. 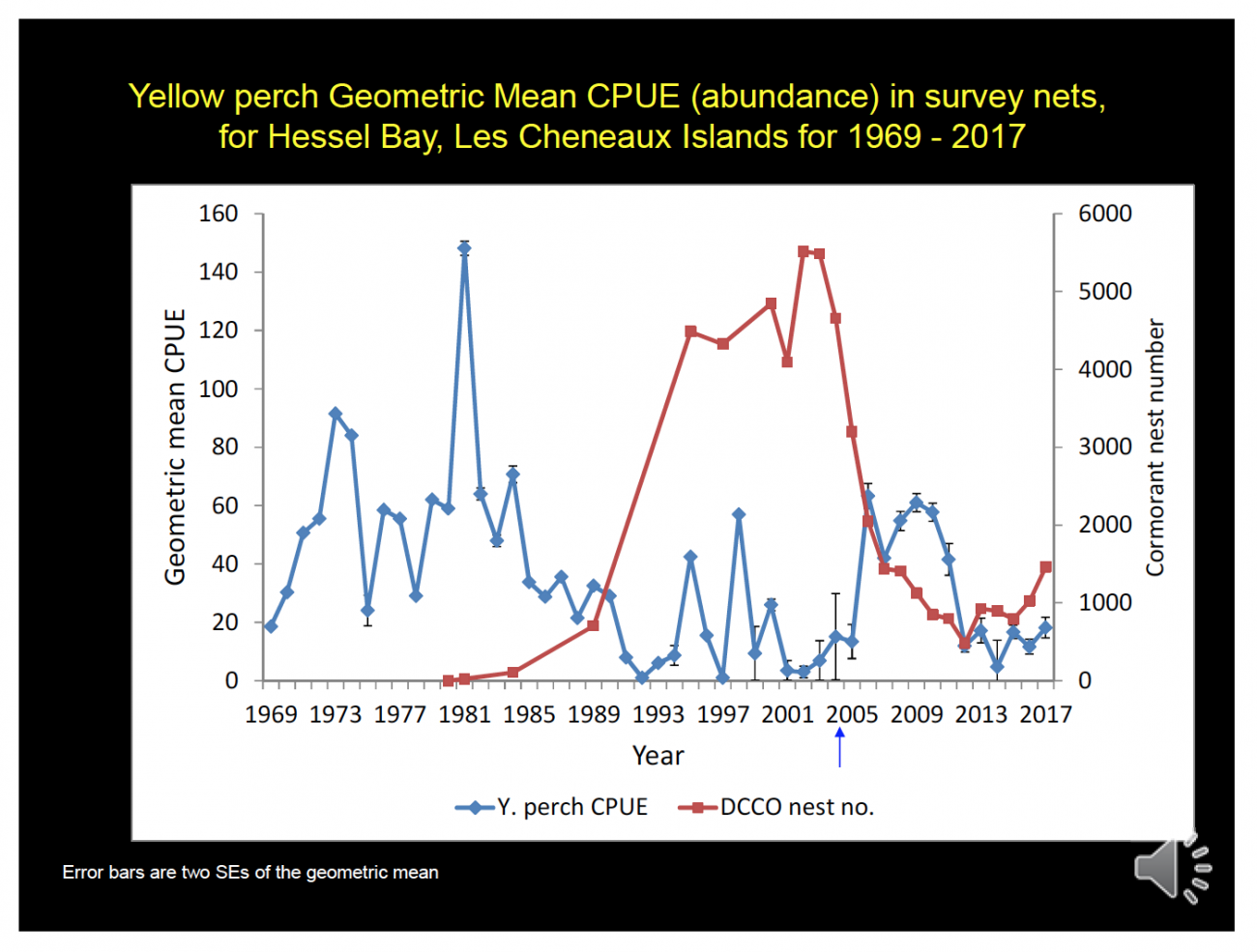 There was conflict elsewhere too, with catfish farmers in the South fending off cormorants in the winter. Cuthbert, the ornithologist, says back then the U.S. Fish and Wildlife Service had staff that did nothing but deal with cormorant complaints.

In 2003, U.S. Fish and Wildlife gave widespread authorization to use lethal control methods to protect sport fish. Altogether, well over half a million birds have been killed this side of the Mississippi since 2000 and countless eggs sprayed with oil to keep chicks from hatching.

A federal judge temporarily shut down the control program in 2016, saying Fish and Wildlife had failed to submit an assessment showing depredation remained necessary. When the ruling came down, residents of coastal communities in the Great Lakes expected the federal agency to quickly do some homework, return to court and prove control is still necessary. So far, that has not happened, though the government announced last year that individual lethal control permits would be granted on a case-by-case basis if the applicant could show proof of damage or safety risks caused by the birds.

Back in June, Jeff Powers anchored his boat up alongside the east end of Whiskey Island. He pulled out a drone and sent it buzzing over a colony of cormorants nesting in a swath of dead trees along the beach. As the drone made its way over the land, Powers was surprised to see how far the dead trees extend into the island.

“This used to be just one row along the shoreline” he says. “Now it’s like five or six rows.” 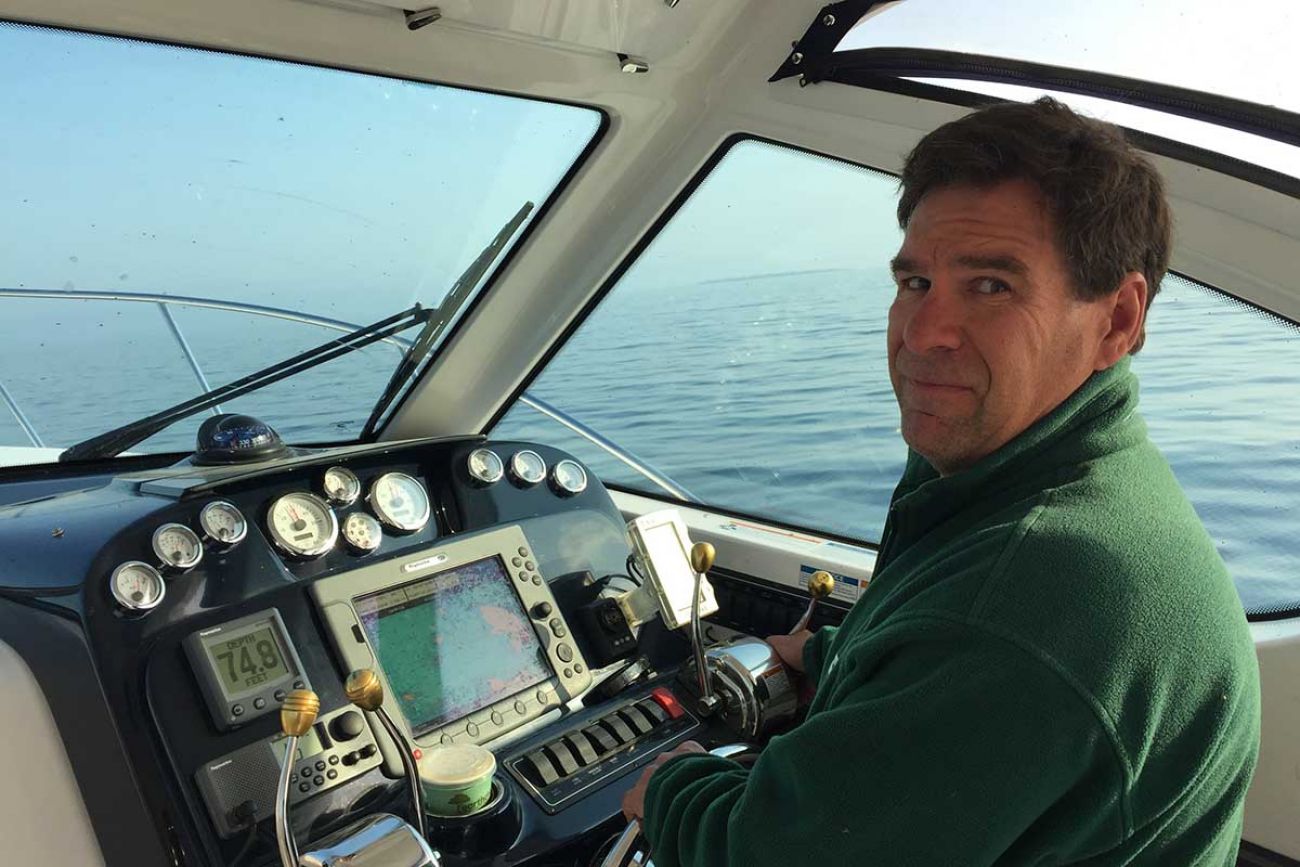 Whiskey is part of the Beaver Island archipelago, a remote set of islands in the middle of northern Lake Michigan. More than 11,500 cormorant nests were counted here in 2007. Fewer than 2,000 were counted two years ago, thanks to lethal control.

Powers helped coordinate that effort. Now he’s worried their work is being undone. Island residents think bass and perch fishing has improved since the birds numbers were brought down, although the ecosystem is too big and dynamic to prove cormorants caused any problems with sportfish.

Powers is a veterinarian and angler who also owns the hardware store on Beaver Island. He sees cormorants as an invader. Surveys done a century ago found few of these birds in Lake Michigan and they were never known to nest in this area.

“It’s an unnatural situation with all these birds here,” says Powers. “The only long-term solution is continued control.”

But some ornithologists say they see no danger of cormorants becoming super abundant in the upper Great Lakes again. Jim Ludwig has been studying birds here his entire life. He says what happened in the 1980s and 90s was unusual because the lakes were full of little fish like alewives and smelt, but very few predator fish were around to eat them.

“I’m fond of saying that all a colonial waterbird had to do was fly out over the lake and open its bill and fall in and it’d have a fish,” says Ludwig, an American scientist who lives in Canada and works independently. 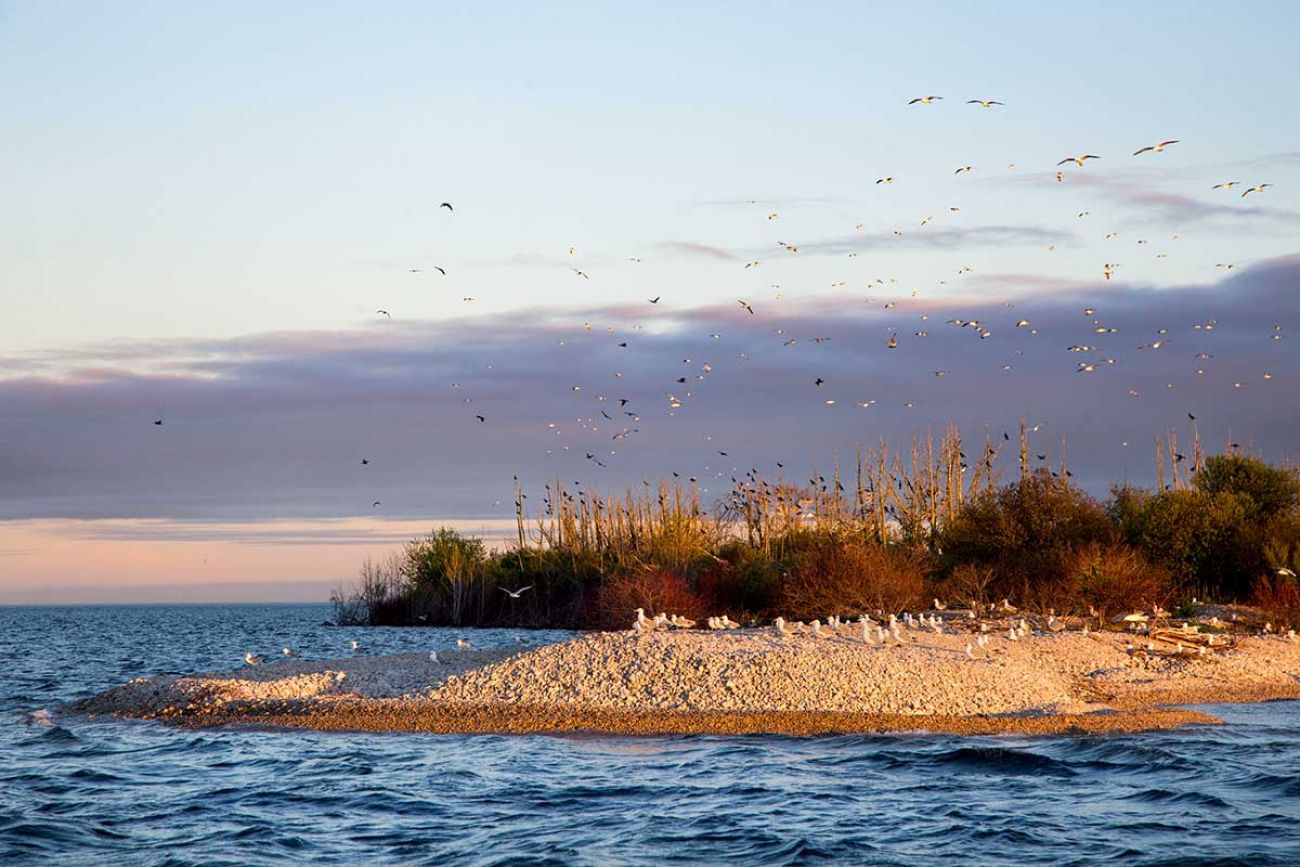 But the amount of fish in Lake Michigan has been in steep decline now for 20 years and is at record low levels. Ludwig says people who still want to use force against cormorants might as well come out and say that all fish should be considered for human sport.

Because Ludwig he has no affiliation with a university or agency, he says he is free to criticize government policy and was in fact a plaintiff in the lawsuit that stopped cormorant control in 2016. He is one of the few public advocates the bird has.

Ludwig warns of a larger issue in all this. He says humans are in danger of forgetting what a natural system looks like, while the planet gets crowded and warm.

“What will life be like if natural systems are gone, if all natural systems are all quote managed,” he asks. “They’ll be managed for some human purpose only. Is that the correct thing to do for the planet? Is that ethical? This whole cormorant thing is the tip of that iceberg.”

Ludwig’s view might be seen as ludicrous in places like the Les Cheneaux Islands region. The number of birds nesting in that island chain is less than a third of what it was at its peak, but fisheries biologists at the Michigan Department of Natural Resources estimate that cormorants still eat at least twice as many perch as anglers catch there. From the perspective of islanders, the birds remain an existential threat.

Politics of a ‘feathered pariah’

It does not appear the matter will be settled by scientific or ethical debate. In June, a congressional hearing was held in Alpena to address the “mismanagement” of cormorants. Jim Ludwig offered to speak but no public comment was allowed.

The lawmakers holding the hearing were candid about their purpose: restore the use of lethal control against cormorants.

“The people who deal with a problem daily usually know what works and what does not work.” he said.

Bergman introduced legislation that would direct the U.S. Fish and Wildlife Service to restore the use of lethal force against cormorants. It passed out of a House Committee in July.

But the bill might not be necessary. U.S. Fish and Wildlife is already issuing permits to fish farmers in the southern U.S. to kill cormorants.

On Thursday, the federal agency is scheduled to host a meeting in Lansing with state and tribal officials to explore whether control is again needed in the Great Lakes to protect wild fish.