Flint launched an ambitious project to restore residents’ faith in their water in February 2016, hiring contractors to replace every lead and galvanized steel water service line beneath the sprawling city.

It was a big, expensive effort following the infamous contamination of the city’s water supply in 2014. The project, which relies on $167 million from state and federal sources, is being closely watched by municipal leaders throughout Michigan who also must replace aging infrastructure.

Nearly three years later, Flint has swapped out more than 7,600 lead pipelines for safer lines made of copper.  But progress slowed this year and costs are soaring because Mayor Karen Weaver dramatically changed contracting practices.

That’s prompted a feud with the state of Michigan, which is threatening to stop funding unless Flint reverts to old, less expensive methods for detecting lead pipes.

“Flint’s decision was unreasonable and could not be explained as an attempt to protect public health,” Michigan Assistant Attorney General Richard Kuhl wrote to Flint officials in a letter this month.

The issue shows just how difficult it is to replace lead lines in cities as big as Flint, whose population is 96,000, even when funding is guaranteed. Michigan had nearly 460,000 lead service lines as of 2016, and city officials statewide are forming plans to replace them following changes to state rules adopted following the Flint water crisis.

In Flint, city officials aren’t sure where lead pipes are located, and Weaver says she’s opting for caution by requiring contractors to dig trenches throughout the city looking for them. Michigan officials and environmentalists say that wastes time and money when other, more precise methods of detection are available.

The project is partially funded by a 2017 legal settlement that requires Michigan to reimburse Flint up to $97 million to find and replace lead pipes hooked up to Flint’s 28,400 homes with active water accounts.

The Natural Resources Defense Council, which helped represent Flint residents in the legal settlement, offers its own criticism.

“The City’s illogical approach means that hundreds of lead and steel pipes will likely stay in the ground and in use, and Flint families will remain in harm’s way in the meantime,” Cyndi Roper, the group’s Michigan senior policy advocate, told Bridge Magazine in a statement.

One fundamental challenge of removing every lead line in Flint: finding them.

Rough estimates suggest more than 20,000 pipelines initially needed replacing, and more than 12,000 remain. The rest are likely copper, which is considered safe.

So where should contractors dig?

Flint initially relied on a University of Michigan algorithm that predicted the likely location of lead lines. Officials used the data to determine where to send hydrovac trucks, which dig small holes with high-pressure water, to confirm the makeup of a pipeline. 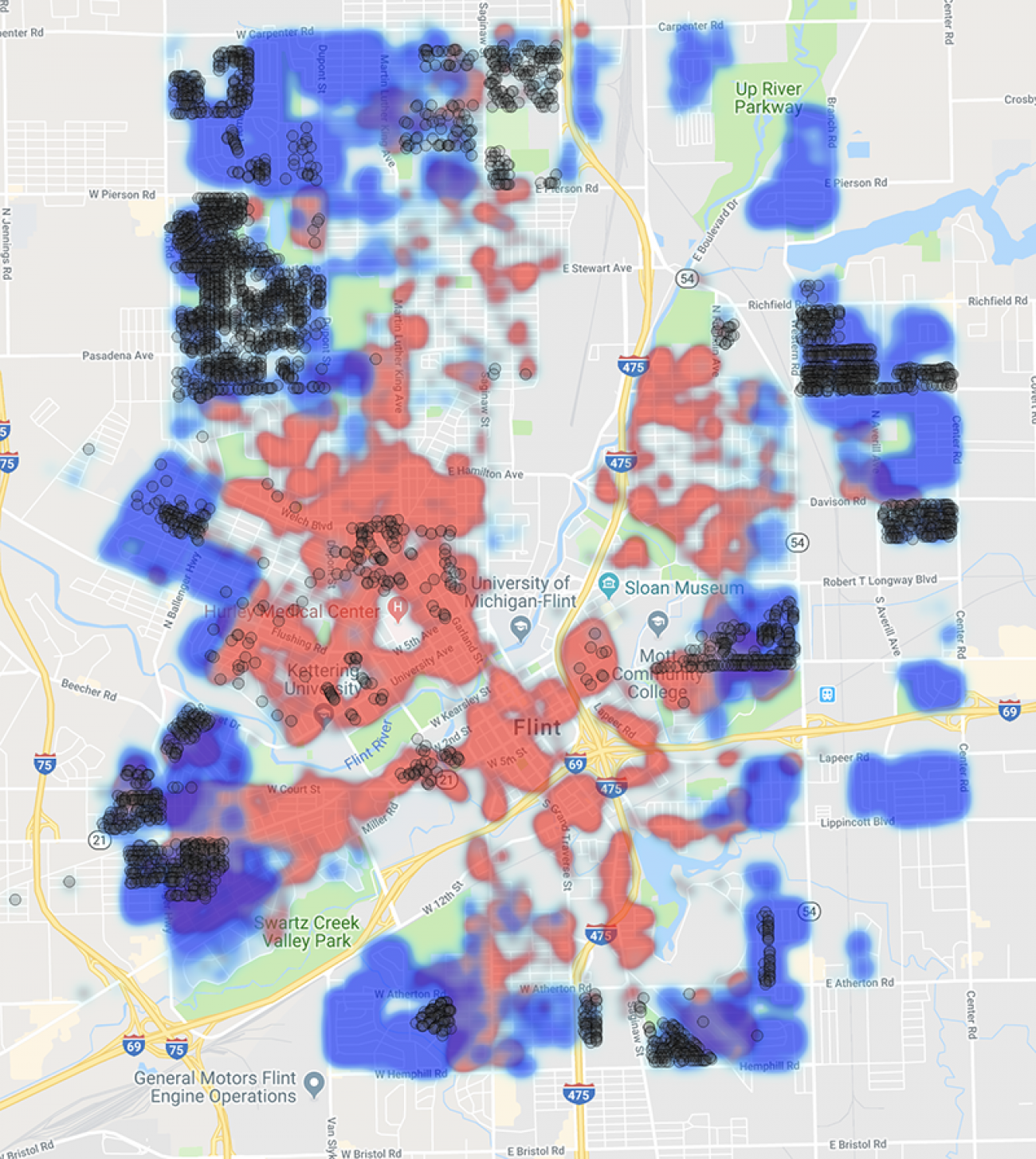 Costing little more than $200 per address, the trucks had been touted as an effective, low-cost investigative tool; When they found copper, contractors could avoid the cost of digging a trench.

But Weaver changed the plan in 2018. Calling the previous plan risky, she cancelled a $2 million hydrovac contract and required 10-foot trenches everywhere, costing a minimum of $1,700 per home.

The new plan means Flint is digging up more copper lines, only to rebury them.

From 2016 through 2017, Flint explored service lines at 8,833 homes across the city and found 6,228 potentially hazardous service lines to replace, according to city figures.

This year, Flint found lead or galvanized steel at 16 percent of homes where contractors dug, replacing 1,360 of the 8,410 pipelines it investigated.

In a Nov. 1 letter, Kuhl, the assistant attorney general, accused Flint of violating the settlement agreement by rolling out a “random excavation plan” with little regard for where lead and galvanized steel lines stretched.

Under Flint’s current plan, “a real possibility exists that not all lead and galvanized steel lines in the City will be identified and replaced,” Kuhl wrote, and Michigan won’t resume funding unless Flint addresses the concerns.

Weaver, who did not respond to questions from Bridge Magazine, has rebutted the state’s criticism, saying she ditched the hydrovac trucks out of caution.

The small hydrovac holes initially failed to detect lead or galvanized steel on at least seven pipelines where different metals were spliced together, she said in a press release.

The only way to assure assure lead line is replaced, she suggests, is to dig the wide trench everywhere.

“Once again, I find myself having to defend why putting people over profit is the right thing to do,” she said in a statement. “I find myself saying, again, that EVERY life in the city of Flint matters to me and I will not buckle on my position.

Weaver added: “I really am having a hard time believing that the [Michigan Department of Environmental Quality] does not get that I will not sacrifice any life, not one, for any amount of money,”

'A disservice to Flint residents’

“The City’s mismanagement of its pipe replacement program is a disservice to Flint residents, who have already been waiting far too long for their hazardous pipes to be removed,” said Roper of the Natural Resources Defense Council.

Flint City Councilwoman Katie Fields told Bridge she has many concerns about the pipeline replacement project and what would happen if the state doesn’t resume funding.

She wants more information about what’s behind the changes and whether they’re designed to benefit any of the five contractors dispatched across the city. But Fields said she is struggling to get answers from city executives.

“If they miss a spliced line, well then just hydrovac a slightly larger hole so you can see that,” she said. “The destruction that’s being caused by these bulldozers all over town — I don’t know how we’re ever going to get the city back in shape.”

He’s project manager for Flint-based Goyette Mechanical and roughly estimates his crews could have replaced 150 more lead pipelines this year had they been allowed to use hydrovacs. The tools are safe and effective at digging around gas pipelines or other infrastructure. Aside from cancelling the contract to investigate pipelines using the hydrovacs, the mayor also ordered Goyette to stop using them in its trench excavations.

“Every time I reach out for answers, I receive nothing — it’s radio silence,” said Parks, who figures he’s now run up at least $350,000 in unnecessary costs as a result of the decision. 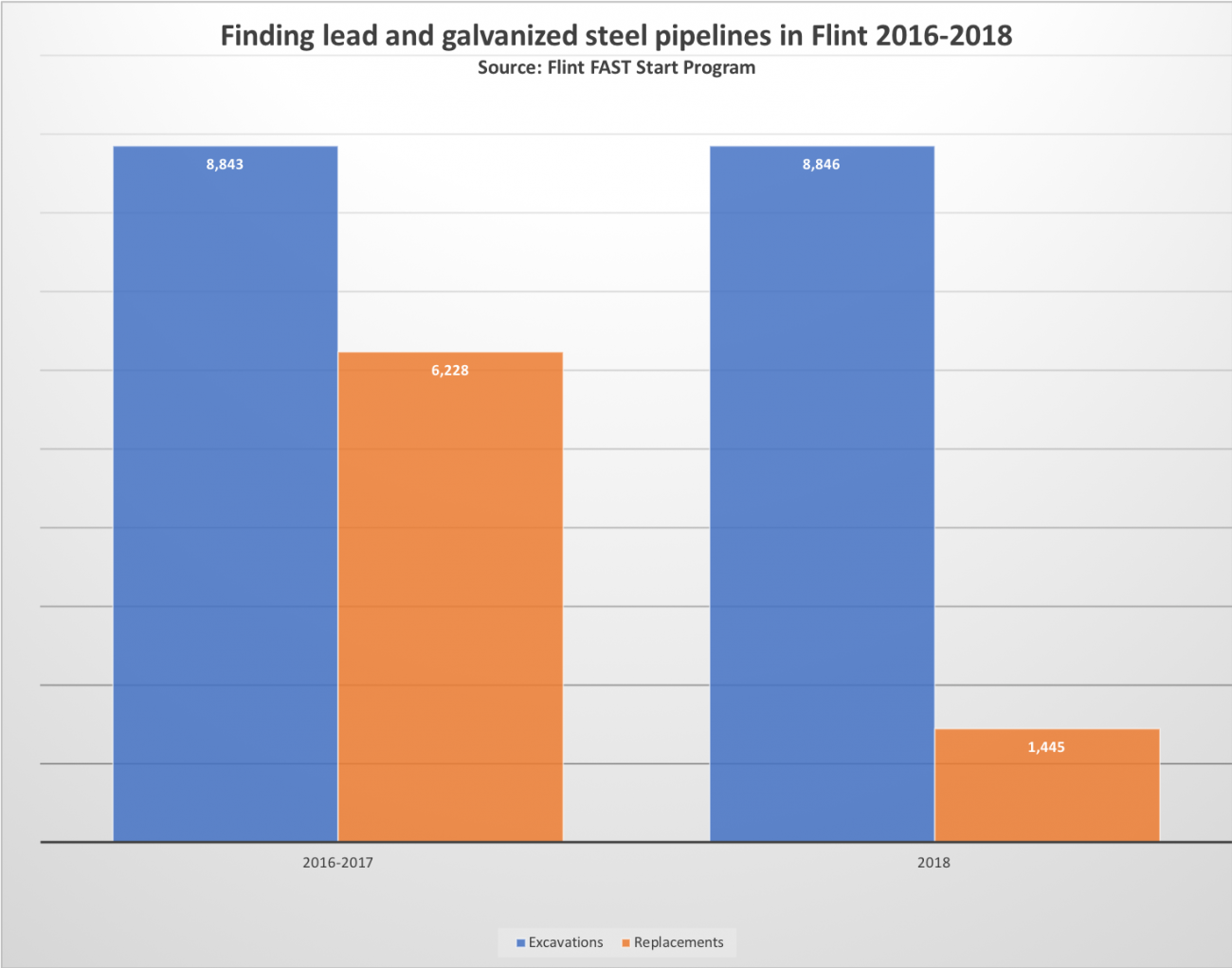 Other City Council members blame the state for threatening to withhold funding.

“The state is out of order,” Councilman Maurice Davis said at a council hearing this month. “They caused the problem.”

A loss of trust

The chain of blunders that exposed Flint residents to lead is now well-known.

An emergency manager appointed by Snyder switched the city’s drinking water source from Detroit’s system to the Flint River in 2014, saying it would cut costs. The Michigan Department of Environmental Quality approved the change – but didn’t require treatment to control corrosion of aging water mains. Highly corrosive river water then rusted the mains, leaching lead into drinking water.

DEQ regulators first ignored the problem, then tried to discredit whistleblowers before the episode swirled into an major scandal that ultimately forced the state to address its failures.

“There has been remarkable improvement. Now, the entire team needs to continue finding ways to work together to finish the job,” Ari Adler, a Snyder spokesman, wrote in an email.  “Flint has the tools and finances it needs to get the job done. The state has a responsibility to ensure they are being used to their fullest potential and Gov. Snyder is confident the state departments have been doing their due diligence.”

Snyder, a Republican, is set to leave office on Jan. 1. His successor Gretchen Whitmer “is reviewing a number of issues relating to Flint, including water line replacement issues” and will consult with Attorney General-elect Dana Nessel, a fellow Democrat, once they are sworn in, said Whitmer spokeswoman Clare Liening.

Snyder’s optimism hasn’t restored Flint residents’ faith in state government — or their taps. The pipeline replacements aim to change that, but pinpointing the lead lines hasn’t been easy.

Records of Flint’s buried pipelines were a scattered mess when National Guard Brig. Gen. Michael McDaniel volunteered to lead the replacement effort in 2016, a post he held through 2017.

“We were groping around in the dark,” he told Bridge earlier this year.

That changed, McDaniel said, after a group of University of Michigan researchers constructed a model that could predict lead risks by entering such factors such as a building’s age, size, location and value. The algorithm grew more accurate as Flint replaced more pipelines and fed it more data, ultimately achieving an accuracy rate of 94 percent.

Now, the city is still digging up thousands of pipelines, but fewer are made of lead.

Flint’s lead hit rate this year, in fact, was significantly below random chance, according to a statistical analysis by Eric Schwartz, a University of Michigan marketing professor and data expert who helped develop algorithm Flint originally used.

“You know something is seriously wrong when digging up service lines randomly would find more lead pipes than the city’s current approach,” Melissa Mays, a Flint resident and a plaintiff in the pipeline settlement case.

AECOM has defended its work. Alan Wong, who managed the project in Flint this year, told Bridge the accuracy of the University of Michigan model “is not to be disputed,” but suggested it alone could not drive Flint’s decisions about where to dig. (Wong left AECOM this month.)

AECOM used some data generated by the University of Michigan researchers but faced a number of constraints, Wong said. That included city policy.

Beyond banning hydrovacs, Weaver also directed AECOM to spread work evenly throughout 10 zones of the city — so as not to favor one ward over another.

That meant contractors couldn’t concentrate resources on all neighborhoods most likely relying on lead lines.

Regardless, Wong said pinpointing lead service lines would naturally get harder as more work is done.

“We know the cost per address is probably going to go up in the last stages, because we’re going to be jumping around, trying to find the needle in a haystack,” he said.

But will the money be there?

Even before Michigan halted reimbursements in November, Michael Chee, an AECOM spokesman, acknowledged the $97 million legal settlement might not cover the full tab of excavations at every Flint home.