He keeps a photo on his phone of a particularly busy day last year, when high water on Lake Michigan had shrunk Grand Haven State Park’s prime sunbathing beach, making it even more crowded than usual.

“There were so many people packed down there,” McGinnis said. “I thought ‘Wow, that’s awesome.’ I had no idea there was this different reality over the horizon.”

That was before the global coronavirus pandemic reached Michigan, sickening more than 49,000 people, killing over 4,700, and prompting medical experts to discourage large gatherings where the virus could spread.

This year, McGinnis dreads the arrival of the sunbathing masses.

“For the first time in the history of Grand Haven city government, we’re encouraging people not to come here and crowd our beach,” he said. “That’s something that’s really hard to say.”

“Beaches are a great outdoor activity, but when they get crowded, that’s a concern,” said Michelle Klein of the northwestern Lower Peninsula’s Benzie Leelanau District Health Department, which is advising local leaders on their COVID-19 response. “That’s when you run a major risk of disease transmission.” 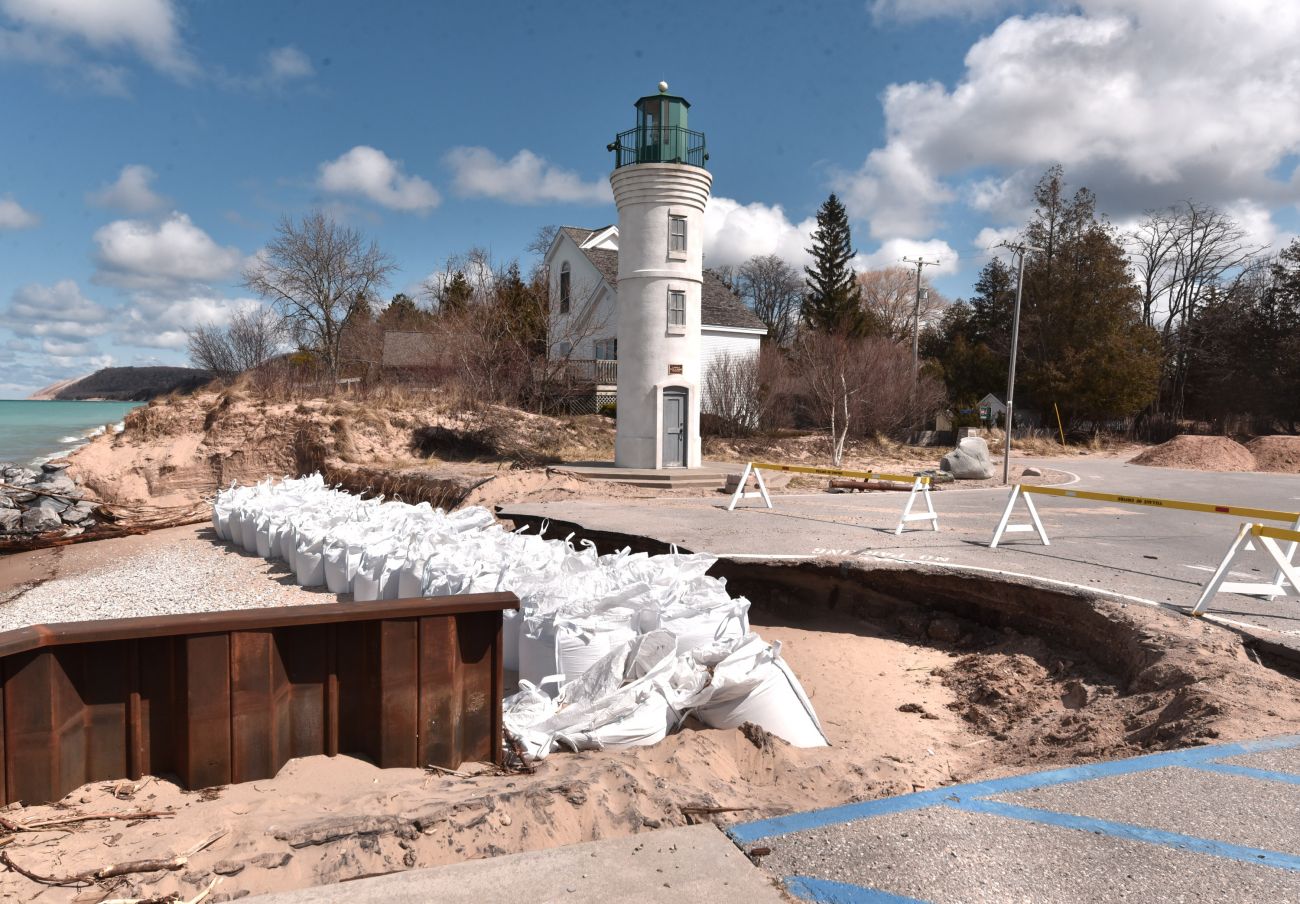 Michigan and Huron — considered one lake for the purposes of water levels because of their connection at the Straits of Mackinac — beat the 1986 April record by 3 inches as the waters rose three feet above average. The U.S. Army Corps of Engineers, which tracks Great Lakes water levels, expects the two lakes to keep filling through July as rainfall and runoff seep downstream.

Elsewhere in the Great Lakes, Lake Superior’s April levels were 14 inches above its monthly average and an inch higher than April 2019. More extreme rises are being seen in Lake Erie (30 inches above average, 9 inches from last year) and St. Clair (33 and 8 inches).

As the waters rise, the beaches shrink.

“It’s a big concern going into this year,” said Jerrod Sanders, assistant director of the Michigan Department of Environment, Great Lakes and Energy’s water resources division. “If there’s any beach left, they’re smaller than they used to be.”

The popular beach at Empire, in Leelanau County’s Sleeping Bear Dunes country, no longer exists. The water now laps against the sidewalk.

The same is true in Tawas Point, on the northwest shore of Lake Huron’s Saginaw Bay.

In Ludington, along central Lake Michigan, Sanders said the beach has lost about 400 yards. And 40 miles southwest of Grand Rapids, Saugatuck’s beloved Oval Beach is about 60 percent of its normal size, said Kirk Harrier, the town’s city manager.

Land and recreation managers expected to deal with a host of problems caused by high water levels this year. Crashing waves have claimed sheds, stairways and other structures from the shoreline, littering the lakes with debris that pose a threat to swimmers and boaters. High water also exacerbates dangerous rip currents that can cause drownings.

But until Michigan registered COVID-19 cases in March, officials had no reason to prepare for the added threat of contagious disease. Now, they’re scrambling to enact contingency plans for when crowded beaches become a public health liability.

“It’s the quintessential perfect storm,” said Harrier, of Saugatuck. “Even without the COVID-19 issue, people would just be too crowded (because of shrinking beaches). Now we’ve got to deal with the virus, too.”

‘No one will stop us’

State and local land managers have struggled to balance their desire to preserve public access to Michigan’s lakeshores with an obligation to protect public health.

Overcrowding in the parking lots at Grand Haven State Park has already prompted park officials to close the lots, although the beach itself remains open.

At Grand Haven and other popular shoreline parks, “we have seen very large crowds even on the marginal weather days,” as Michiganders venture outdoors for a break from the monotony of stay-home orders, said Ron Olson, parks and recreation chief for the Michigan Department of Natural Resources.

Avoiding dangerously large crowds as the weather warms, Olson said, “is going to be a challenge to say the least.” 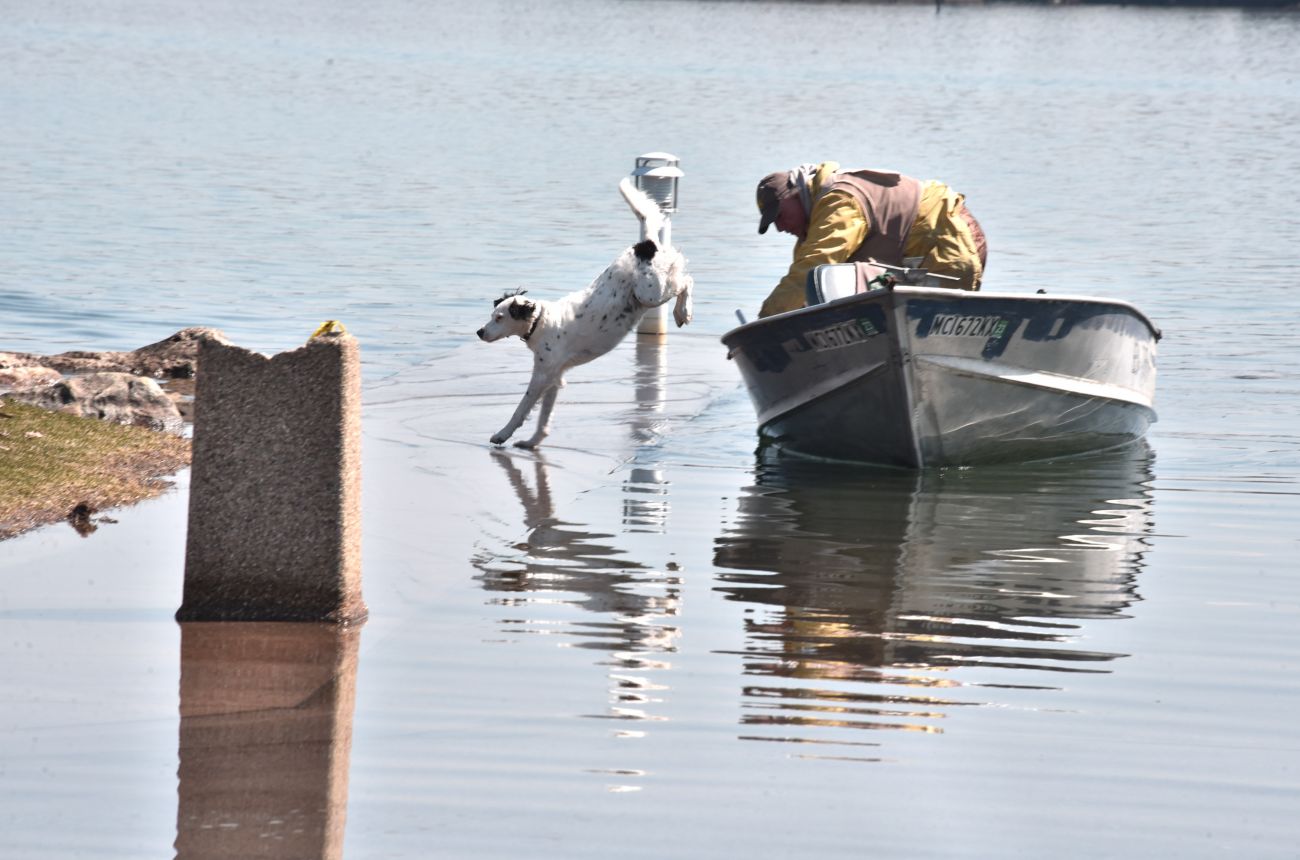 State parks officials have placed banners at park entrances encouraging visitors to keep their distance. Olson and his staff are in the process of crafting contingency plans to guide their response when visitors don’t heed the signs. That could include limiting access to parking lots, as they did in Grand Haven, using bullhorns and public address systems to ask crowds to disperse, or closing parks altogether if all else fails.

So far, only Tippy Dam Recreation Area is closed. The popular Manistee River fishing spot had become packed with steelhead anglers fishing from the riverbank. Olson said more closures or visitor caps could be coming if crowds become a problem at popular parks.

“We don’t want a park to become a vector for the spread of the virus,” Olson said.

But with tensions rising among those who oppose Gov. Gretchen Whitmer’s restrictions on Michiganders’ movements to contain the virus, even limited efforts to discourage crowds have prompted a forceful backlash.

In response to the parking lot closure at Grand Haven State Park, conservative activist Brandon Hall has organized a “Beach Bash” on Saturday to protest closures. Hall, of Petoskey, was also behind a gathering last month outside Whitmer’s Lansing residence, where dozens of people showed up to protest Michigan’s stay-home order.

“We’re going to have a Michigan summer, and no one will stop us,” Hall said of Saturday’s protest.

Whitmer’s current stay-home order ends May 28. It’s unclear what restrictions might remain on Michiganders’ ability to travel throughout the state or gather in large groups.

But one thing is clear, said Harrier: Once the order lifts, “it’s not like the virus is gone and everything’s fine again.”

He expects crowds at Saugatuck’s Oval Beach to keep growing. Faced with the possibility that crowded beaches could become a public health liability, he is working closely with the Allegan County Health Department to consider possible responses, including limiting beach parking to discourage crowds.

Oval Beach is “the primary economic generator” for Saugatuck, Harrier said. Reducing access or closing the beach altogether would cripple the local economy. Without beach-goers, there’s nobody to patronize the town’s restaurants, bars and souvenir shops once stores are allowed to re-open. And there’s nobody to stay in Saugatuck’s vacation rentals.

Harrier hopes to avoid such a decision. He is trusting beachgoers to police themselves by maintaining at least six feet between their beach towels, and finding another stretch of shoreline if Oval Beach is too full. Deploying local law enforcement to police social distancing is not feasible, Harrier said.

“We don’t have the resources to do that,” he said, “so it’s gotta either be open or shut.”