The Michigan Department of Environment, Great Lakes and Energy this week is beginning to accept public comment on proposed new limits for PFAS in drinking water.

Through month’s end, the state is soliciting input on the proposed rules, including three community meetings, before likely rolling them out in late spring.

Michigan’s rules would set maximum contaminant levels for seven poly- and perfluoroalkyl substances in drinking water, all lower than the federal advisory of 70 parts per million, at the recommendation of the Michigan PFAS Action Response Team’s (MPART) Science Advisory Workgroup.

Some members of work groups that developed the proposal advocated for a limit on the total amount of PFAS compounds allowed in drinking water, but that’s not possible because so much is still unknown about the chemical, said Scott Dean, a spokesman at EGLE.

Instead, Dean said the work group focused on seven commonly found, widely studied compounds of the thousands of PFAS chemicals to create “defensible” limits for the seven compounds based on their known health effects such as cancer, kidney and liver damage and developmental delays and low birth weights.

How the rules work

The rules would require municipalities to test for the seven PFAS compounds at least once a year. Higher-than-permissible test results can trigger mandatory quarterly testing. If the average of four tests is higher than EGLE’s limit, the water supplier must notify the public within 30 days and note the high PFAS levels in its annual consumer report.

“Currently we only expect [around 20] systems to struggle with meeting the [maximum contaminant level],” Dean wrote in an email to Bridge Magazine.

The sites on the state’s radar span the state, and include several schools and child care centers, mobile home parks, municipalities, and industrial sites, though Dean noted many have already begun to address the issue.

State officials previously noted high PFAS levels in drinking water in Ann Arbor, Grayling, Plainfield, Oscoda, Parchment, and at an elementary school in Grand Haven. Dean said none of these systems is expected to be impacted by these new rules.

If a supplier’s first sample is more than four times above the maximum contaminant level, the water supplier is immediately out of compliance and must alert the public.

It’s good for public health -- but how to fund it?

Water suppliers back the rules, but worry about paying for increased costs of testing and remediating water, said Bonnifer Ballard, executive director of the Michigan section of the American Water Works Association, which represents 4,300 utilities, including about 1,700 in the state.

“That cost is not insignificant,” Ballard said. “The smaller systems are going to be the ones most impacted by the sampling and testing requirements because they don't have” labs already owned by larger systems such as Ann Arbor and Lansing.

Testing costs would vary wildly and estimates aren’t yet available, Ballard said. Some communities may ask the state for money help cover costs, while others may end up on users’ bills.

“Obviously, some are going to the rate-payers. That's a natural evolution of additional costs and providing water,” Ballard told Bridge.

PFAS remediation is already costing local governments across the state millions of dollars, and those costs could grow with increased monitoring.

How to weigh in

Town halls are planned in three cities this week and next:

The Grand Rapids meeting will be live-streamed, and residents can sign up to be notified when the online stream begins.

Each town hall will include an informational session before the input period. Any comments made at the hearings should also be submitted in writing for the record. 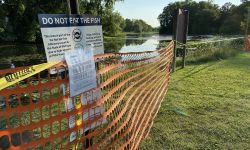