Prices for the commercial fertilizers Schwab and other Michigan farmers apply to their crops have doubled in the past year as a result of the Russia-Ukraine war, shifting trade policies, industry consolidation and supply chain complications.

So Schwab is converting 80 acres of his 800-acre farm near Standish to soybeans that require less fertilizer. And he’s rationing nutrients on the rest of his land. 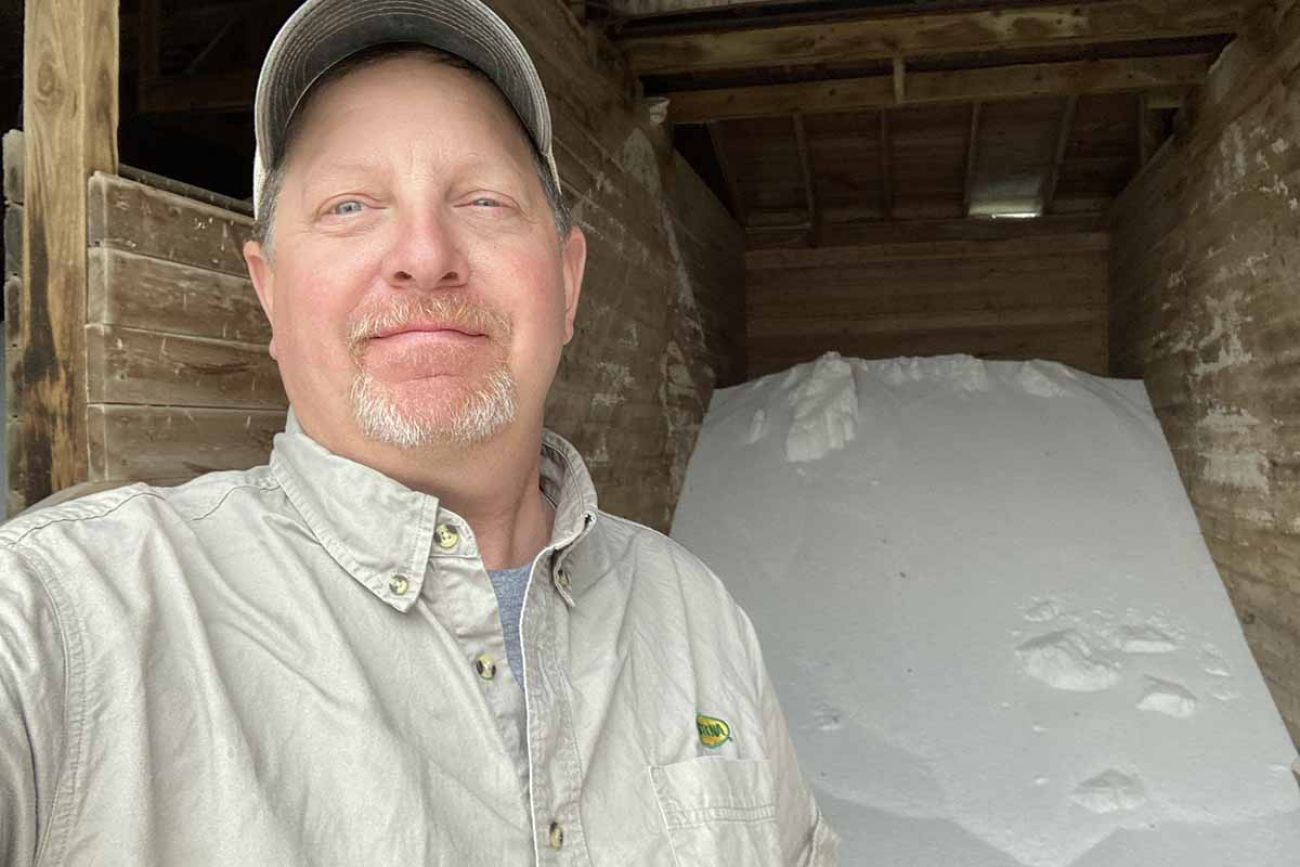 Farmer and crop adviser Matt Schwab stands near a bin of urea at a fertilizer warehouse. Schwab is rationing fertilizer and switching up crops on his 800-acre farm, in hopes of weathering the ongoing price spike. (Courtesy photo)

It’s a common story in Michigan and nationally, after nitrogen and potassium fertilizer doubled in price over the past year, while phosphorus products rose an average of 60 percent.

Koeman said the average price to fertilize an acre of Michigan corn has doubled since last year, to $300. For a 211 acre farm  — Michigan’s average size — that means a corn farmer can expect to spend $31,650 more on fertilizer this year. Fertilizer costs are now so expensive they comprise 40 percent of total raw material costs for average farmers.

Consumers can expect higher prices. On the bright side, there may be less nutrient pollution in Lake Erie and the Saginaw Bay, two Great Lakes water bodies plagued by pollution that fuels toxic algae blooms.

Here’s what the fertilizer shortage means for Michigan farmers, consumers, and the environment.

A multitude of factors, but the most recent disruption stems from the war in Ukraine.

Russia and Belarus are major fertilizer producers, exporting the vast majority of their production to other countries. Both countries are now subject to sanctions in some nations, while Russia has announced a temporary suspension of fertilizer exports.

As a result, “we’re not importing those right now,” said the Farm Bureau’s Koeman.

That comes on top of price increases that began last year when China ratcheted down fertilizer exports amid fears of too little domestic supply. The rising price of natural gas, which is used to make ammonia that in turn is converted to nitrogen fertilizer, also plays a key role.

And though the United States produces fertilizer of its own and imports vast quantities from Canada, those pinch points in Russia, Belarus and China have left U.S. farmers competing with other countries for fertilizer produced in North America.

Meanwhile, supply chain issues are taking a toll. Some fertilizer shippers have been forced to contend with reduced shipping capacity on railroads, resulting in bottlenecks that further limit availability and drive up costs.

And there’s another culprit too, Koeman said: Industry consolidation.

“There aren’t that many players anymore that actually make the fertilizer and mine the fertilizer,” he said. So when one source goes offline, the resulting disruption can be huge.

And it’s getting Michigan lawmakers’ attention. This week, both the Michigan Senate and the Michigan House Agriculture Committee passed resolutions urging the federal government to address fertilizer price spikes and calling for legislation that would let farmers petition the U.S. International Trade Commission to waive tariffs on fertilizer imports.

What does it mean for farmers?

For now, farmers are absorbing the price increase.

That’s because the war in Ukraine has also disrupted wheat and corn supplies coming from the region known as Europe’s bread basket. That’s driving up prices, allowing U.S. farmers to offset high fertilizer prices by selling their crops for more money.

But the fertilizer spike comes as farmers are also contending with sky-high prices on the diesel fuel needed to run their tractors. As of Thursday, Michigan was averaging $5.27 a gallon, according to AAA. Federal figures show that’s an increase of more than $2 from a year ago.

What does it mean for consumers?

Many farmers were already using fertilizer and gasoline as efficiently as possible to keep material costs down, Koeman said, leaving little room to ration supplies as costs continue increasing.

And farmers are contending with other price hikes, too.

“Every company that I work with has increased their prices, you know, to offset higher costs,” said Schwab, the farmer who also works as a crop adviser.

Those increased expenses for the farmer will eventually be passed on to consumers. Expect the price of beef, bread, crackers, vegetables and other foods to keep climbing.

What does it mean for the environment?

Cutting back on fertilizers would be good for watersheds plagued by nutrient pollution from farm runoff, such as the Saginaw Bay and Lake Erie.

Schwab estimated at his farm in the Saginaw Bay watershed, fertilizer use will be down 25 percent this year. His neighbors are cutting back too, or switching to crops that require less.

“Definitely, there's going to be some acreage switched into soybeans,” said Schwab, who is also a certified crop adviser.

Will it be enough to guarantee fewer algae problems this year? That’s hard to predict, because blooms are fueled by a multitude of factors, from nutrient levels to water temperatures. Plus, fertilizer pollution in waterways fluctuates depending not just on the amount of fertilizer applied to nearby farm fields, but also how much rainfall hits those fields before plants have a chance to soak up fertilizer.

And some Midwest farm fields are now so saturated with nutrients, reductions in fertilizer use don’t have a big immediate effect on water quality.

Still, said Thad Cleary, an environmental quality specialist with the Michigan Department of Environment, Great Lakes and Energy, “it's a good thing that there's less fertilizer being applied, because that means there's less nutrients that potentially could be lost.”

What about that Osceola County potash mine that just got a $50 million state subsidy? Would that help boost supplies?

Yes, but it’s not clear how significantly.

“We're certainly advocating for more competition” in the fertilizer industry, Koeman said, and the planned Michigan Potash & Salt Company facility is a win from that perspective.

Potash, a type of salt rich in the potassium minerals used to produce fertilizers, is often mined from underground. The Osceola County deposit, located thousands of feet underground, has been hailed as an “incredibly rich” source.

But the plan to mine that deposit will take time to execute. And after that, Schwab noted, Michigan Potash & Salt will be selling its products on the global market. That means Michigan farmers will compete with farmers in other states and abroad for the products coming out of Osceola County.