It’s been a storybook hunting season for Jennifer Parent, who bagged two big bucks this fall on her 13-acre property in Howell.

With each clean shot, Parent took a day or two to celebrate her success, then opened an app on her phone to report its rack size, location and other details that state wildlife managers say they’ll use to better manage Michigan’s herds.

“It was easy, simple and took probably four minutes,” said Parent, 33. Her less tech-savvy father “didn’t have a problem with it, either.”

After some early trepidation from some hunters who worried about privacy concerns and tight reporting deadlines, Michigan’s first year of mandatory online deer harvest reporting has been going smoothly, helping the state better manage herds, according to Michigan Department of Natural Resources officials and hunting advocates.

Parent’s two bucks were among more than 251,700 deer killed by Michigan hunters as of late Wednesday afternoon, the end of Michigan’s popular two-week firearms season. 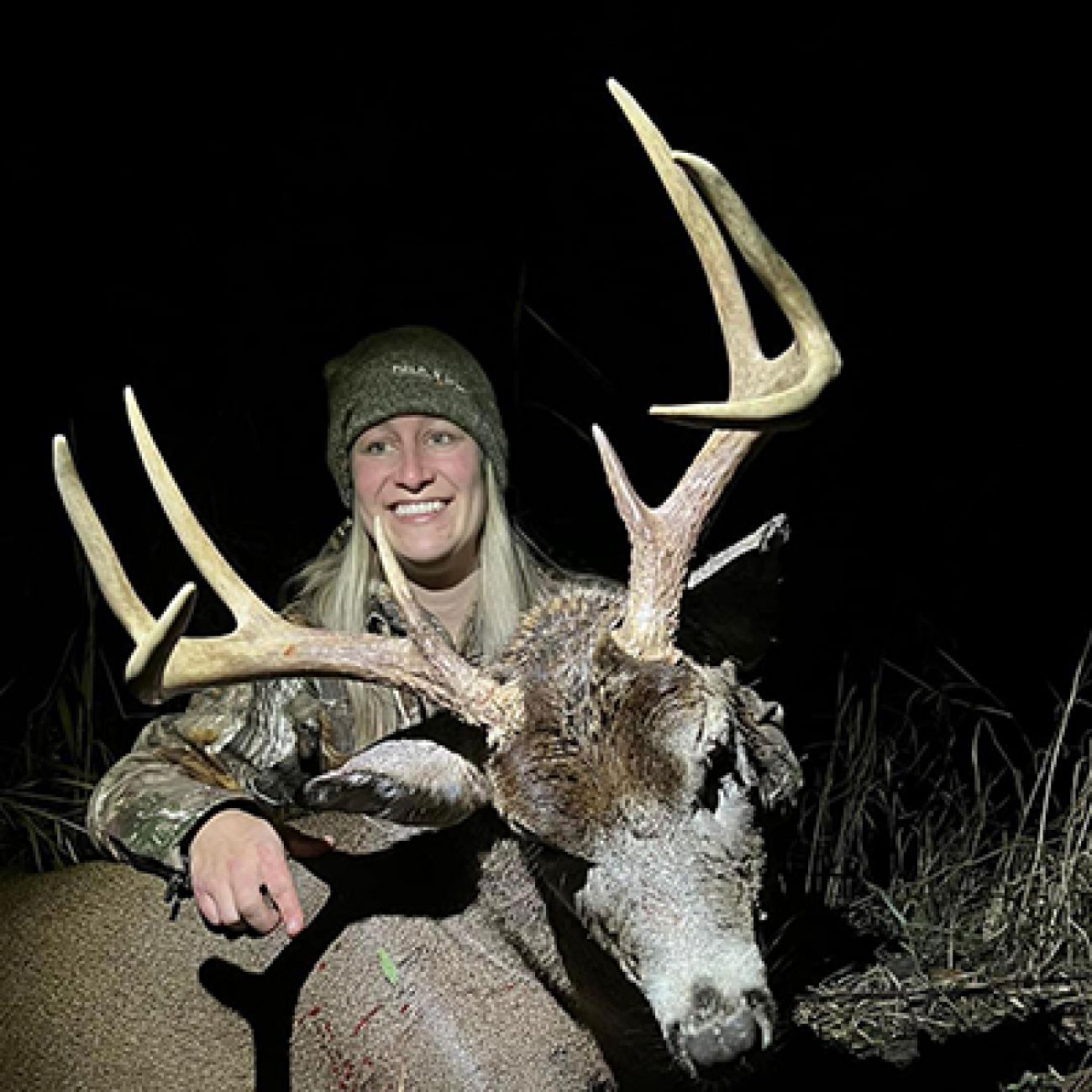 Jennifer Parent, of Howell, poses with one of two bucks she shot this fall at her property in Howell. (Courtesy photo)

That includes more than a deer-per-minute killed on opening day — a statistic that stood out to DNR deer, elk and moose management specialist Chad Stewart as he pored over reporting data that makes it possible to track Michigan’s hunt in real time.

“It was a ‘woah’ moment for me,” said Stewart. “The number of bucks taken that day in Michigan exceeds the buck harvest that is reported for the season in places like Maine, Maryland, Nebraska, North Dakota and a bunch of those smaller New England states.”

That despite the fact that hunting is on the wane in Michigan, with about 270,000 fewer hunters in the woods today than in the mid-1990s as growing deer herds wreak havoc on suburban lawns and car bumpers.

Deer hunting will continue through January 1 for seasons open to those who hunt with bows or muzzle-loaders, or target does and young deer. If this year tracks with last year, hunters are expected to take a total of about 400,000 deer from Michigan’s woods.

Under the new rules, hunters are required to report their deer within three days of killing it. To do so, they visit the DNR’s harvest reporting website or use a mobile app to check in their deer, providing details about themselves and the deer before pinpointing the location of the deer’s death on a digital map.

It was a major change. Until this year, hunters were required only to attach a paper tag to their deer carcass to prove it had been legally killed if a conservation officer happened to inquire. In years past, state wildlife managers sent voluntary postseason surveys to about 60,000 of the state’s half-a-million hunters to estimate the number of deer taken from Michigan’s woods each year.

But survey participation has declined dramatically in recent years, leaving the agency with little confidence in its estimates. Last year, just 33 percent of recipients responded, down from 75 percent in the early 2000s.

“And it took a long time to get that information back,” Stewart said, often well into the following year.

Harvest estimates are used to adjust regulations for better hunting, population and disease control, but unreliable estimates about each year’s harvest make those management decisions difficult. Stewart said the agency will continue the mail-in surveys for at least a couple of years, but the reporting requirement is expected to yield more robust data.

Amy Trotter, executive director of the Michigan United Conservation Clubs, said her group had to combat a wave of online misinformation about the new rules leading up to the season. Other hunters feared a 72-hour reporting window would not be enough time for hunters in remote parts of the state with spotty cell and internet connectivity.

But with the season now well underway, Trotter said, “people who maybe grumbled a bit, they have been pleasantly surprised.”

Still worrisome to hunters, Trotter said, is a default penalty that makes failing to report within the allotted time a misdemeanor punishable by up to 90 days in jail and a $500 fine. DNR officials supported a bill to downgrade that penalty to a civil infraction, but a major last-minute change to the bill prompted Gov. Gretchen Whitmer’s veto.

Trotter said she expects to revisit the issue next legislative session. For now, Stewart said, DNR officers are taking an “education over enforcement” approach with hunters.

For the most part, he said, hunters appear to be adjusting to the new system with ease. He estimated 70 to 75 percent of successful hunters reported their kill, a compliance rate that would put Michigan in line with similar systems in other states.

Jason Maraskine’s first attempt to report a deer on the state’s app took a bit of trial and error, he said, but “it wasn’t bad.”

“If the data is used properly, I’m all for it,” said Maraskine, the northeast Michigan field director for Whitetails Unlimited.

Maraskine’s experience hunting in other states has made him a believer in mandatory reporting systems. More detailed, localized information about Michigan’s herd sizes, hunter success in the woods, and other metrics can help wildlife managers set more precise regulations, he said, ultimately benefiting hunters.

But Maraskin said he thinks it’s overkill to require hunters to share the exact location of their kill, despite DNR officials’ vow that the information won’t be shared publicly.

“Let’s say you shoot a record buck,” Maraskine said. “A DNR officer is human just like everybody else. They’re gonna say ‘hey, where’d Jason shoot that?’”

Stewart acknowledged that such skepticism appears to have inspired a few hunters to report their kill in “weird locations,” from Antarctica to the middle of a lake. But for the most part, he said, hunters shared their information willingly.

Stewart said precise data on the location of killed deer can be useful to hunters. For example, it gives DNR officials the ability to alert hunters if they identify chronic wasting disease near where that hunter registered their deer.

Still, he said, “it’s something we’re going to continue to evaluate.”