LANSING — Michigan Republicans are trying to block Gov. Gretchen Whitmer’s plan to overhaul the state’s environmental department because it would eliminate oversight panels favored by the GOP.

The override would take effect if both Republican-led chambers approve it within 60 days, but Senate leaders say they continue to negotiate with Whitmer.

An eight-paragraph resolution from Rep. Jim Lower, R-Cedar Lake, says the panels “ought not be abolished by executive decree.” Testifying Wednesday, Lower called Whitmer’s move an “abuse of power” and a “de facto veto” of a law the Legislature adopted last year.

“We can’t allow it to be abolished by a unilateral executive order,” Lower said.

The skirmish comes barely one month into Whitmer’s tenure and appears to challenge her desire to find common ground with Republicans and avoid gridlock that often threatens divided governments.

The row also comes as Michigan faces a host of threats to its water, including widespread pollution from a group of cancer-causing chemicals known as PFAS.

As the House considered an override Wednesday, Whitmer asked Attorney General Dana Nessel, a fellow Democrat, to rule on the legality of the oversight panels Republicans seek to protect.

In her letter to Nessel, Whitmer wrote that the U.S. Environmental Protection Agency questioned whether the new panels were “so cumbersome and time-consuming” that they would jeopardize federal requirements for timely rulemaking.

At a hastily arranged press conference minutes after the House vote, Whitmer refused to back down.

“I’m not withdrawing the executive order. I stand by it. It is the best policy to clean up drinking water,” she said. “Today’s action endangers the public and threatens to burn bridges. And that’s unfortunate because a lot of people are counting on us to clean up their drinking water.”

Whitmer called the House’s maneuver a “huge setback” for bipartisanship, but said it wouldn’t destroy prospects for consensus.

“I still want to work with people,” she said. 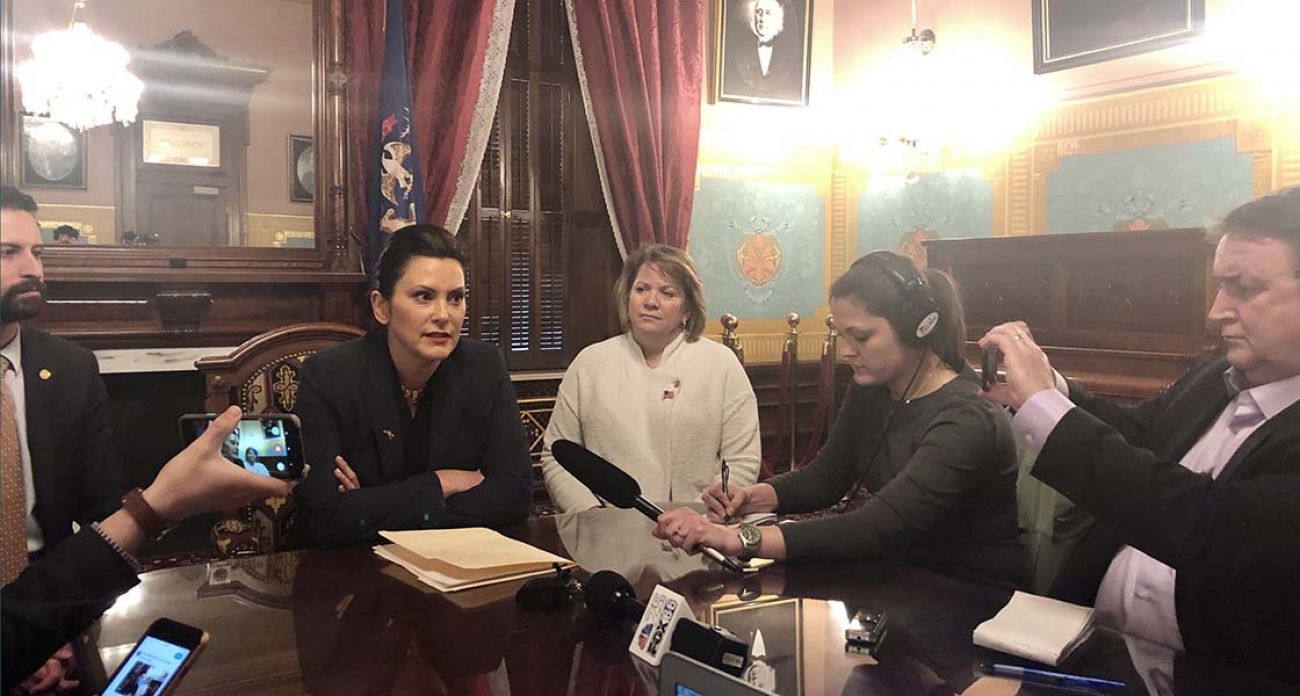 Both chambers would need to approve the override of Whitmer’s executive order, which would be immune to a veto.  Lower said the Legislature hasn’t overturned an executive order since 1977.

Democrats contend Whitmer is using her Constitutional power to reshape the government and reversing her order imperils clean water.

Republicans and industry groups — including the Michigan Chamber of Commerce — say the boards are necessary to increase transparency in environmental rulemaking.

Lower said he, like Whitmer, campaigned for clean water, and he supported parts of her executive order. But he was moving quickly to reverse the order to give her plenty of time to submit a new version.

During testimony Wednesday, he and fellow Republican Jim Lilly of Park Township said they would support a nearly identical order from Whitmer if it kept the disputed panels intact.

House Speaker Lee Chatfield, of Levering, said he would seek a compromise with Whitmer, but he would not say what that might look like.

Senate Republicans say they aren’t yet ready to seek to overturn Whitmer’s order.

“The goal is to keep an open line of communication and hope there is a way for us to reach consensus and compromise at every opportunity,” McCann said.

Shirkey and Chatfield met with Whitmer on Wednesday morning to voice their concerns, McCann said.

She said Shirkey wants to examine Whitmer’s executive order in the Senate Oversight Committee, which could hold hearings as early as next week.

Whitmer envisions a reshaped agency that would include a “Clean Water Public Advocate,” “Environmental Justice Public Advocate” and an “Office of Climate and Energy.”

The public advocates would accept, investigate and analyze complaints related to drinking water and environmental justice problems, and work within state government to address them.

The new department would also house an interagency team — composed of agency directors across state government — to draw a statewide environmental justice plan. The aim is to fix policies that disproportionately pollute low-income and minority communities from power plants and factories.

Whitmer’s orders do not increase funding for environmental regulation.

Whitmer’s reshuffling  comes nearly five years after residents of Flint were exposed to high levels of toxic lead in their drinking water, a crisis largely attributed to failures in state government, including the DEQ.

“We need to be laser-focused on cleaning up the water in our state,” Whitmer said Monday.

“Right now, communities across our state don’t trust the water coming out of their taps, and there’s a real lack of trust in state government.”

ICYMI: Here is our press availability to discuss my executive order to clean up Michigan’s drinking water. https://t.co/1qQpuUbdwi

But the nixed oversight boards are drawing the most attention. Most notably: the Environmental Rules Review Commission.

Republicans created the private-sector panel — largely populated by industry officials — to safeguard against what they contend was overzealous regulation by state officials.

The board, which has members appointed by former Gov. Rick Snyder, has power to “oversee all rulemaking of the Department of Environmental Quality.”

In the event of a stalemate between the agency’s director and the board, the director could seek a final ruling from the governor.

But James Clift, policy director at the Michigan Environmental Council, said the board could halt resolutions by taking them up and never acting — therefore never kicking a decision to Whitmer.

“They could create this infinite loop,” Clift said.

Aggrieved parties trying to, for instance, alter floodplains, drill for oil, mine minerals — or do most anything requiring regulator’s permission — could seek relief. It does not require members to come from particular professions.

Environmentalists last year dubbed the boards “polluter panels,” arguing they would defang an agency that has lost teeth due to years of crunched budgets and prioritization of economic development.

But Republicans and industry backers say they would bring more accountability to an agency they’ve viewed as overly strict.

The panels have only met twice, Whitmer said, and have yet take action on a rule or permit.

Whitmer has support from Heidi Grether, Snyder's last DEQ chief and former oil industry lobbyist and executive. In a letter to Whitmer and legislative leaders Wednesday, she wrote to continuing the panels would risk "wasting valuable resources" and potentially jeopardize authority the federal government has granted to Michigan regulators.

"Without final decision-making to move forward with an administrative rule, the department will be unable to perform its statutory duty." she wrote.