PFAS is in fish and wildlife. Researchers prowl Michigan for clues.

J.D. Hock’s heart sank in 2018, when the state of Michigan warned it was unsafe to eat deer harvested within a five-mile radius of Clark’s Marsh in Oscoda Township.

For decades, his family had hunted on property just outside the “do not eat” zone. He had just mailed “an insane amount” of venison jerky to his son-in-law, an armed service member in Afghanistan.

“You’ve got to be kidding me,” he thought, wondering whether the care package contained poison.

High levels of the “forever chemicals” in Oscoda Township, the result of firefighting foam used on the now-shuttered Wurtsmith Air Force Base, make the Lake Huron community one of Michigan’s most contaminated sites. Along with deer, state officials warn against eating fish and any other aquatic or semi-aquatic animal that lives in the marsh.

Hock now fishes only catch-and-release, and has come to terms with the health risk he takes by hunting. But he worries about what the chemicals are doing to the animals in Clark’s Marsh and the many other locations where state health officials recommend limiting or completely avoiding meals of PFAS-tainted fish.

Years into Michigan’s PFAS contamination crisis, such answers remain scarce. But the state’s experience with widespread PFAS contamination has made it an early research laboratory into how the chemicals spread through the environment, and what that does to the species that live anywhere near the toxic stew.

In humans, research has linked PFAS exposure to developmental problems, hormonal and immunity problems, fertility issues and cancer. That’s why regulators warn against drinking water or eating food tainted with the chemicals.

Effects on plants and animals are far less well-understood, leaving us without a clear picture of whether or how PFAS contamination could harm species that humans depend upon for food, clean water, crop pollination and other benefits.

The quest for information started in Clark’s Marsh, where a Purdue University research team has been working since 2019 to learn more about how PFAS moves through the environment.

Could the sediment be a continuing source of contamination even after PFAS stops flowing in the water? Does PFAS contamination transfer from species to species as it moves through the food chain? And, importantly, what kind of harm do exposed species experience?

Last summer, researchers from Purdue ecology professor Jason Hoverman’s lab visited Clark’s marsh, a large wetland just south of the Air Force base, to collect samples of everything from fish to sediment and algae. From there, they’ll use models to map out how various species are being exposed and whether the toxins can “transfer out” of the aquatic system by, say, a migratory bird eating a fish from Clark's marsh, or an aquatic insect leaving the water.

For fish, the exposure pathway is fairly obvious: They live in tainted water. But it’s not clear how a land-based deer near Clark’s Marsh wound up with PFOS levels of 547 parts per billion in its muscle tissue. State officials warn against eating any amount of meat with more than 300 parts per billion of PFOS.

Answering such questions is a step toward understanding how PFAS impacts the plants and animals that inhabit contaminated settings, Hoverman said.

“It takes a lot to just outright kill something,” Hoverman said, but “we're concerned about those sub-lethal effects.”

What limited research exists — little more than a few studies on lab rodents and amphibians — is troublesome. Amphibians, Hoverman said, tend to absorb PFAS so quickly, their body contaminant loads “reach equilibrium” with the surrounding water within days. That exposure can stunt their growth, but more research is needed to determine other possible harms.

These early inklings raise concerns that the chemicals could alter the environment over time by making it more difficult for key species to survive. And that, Hoverman said, could threaten humans in ways that can’t be mitigated by avoiding contaminated meat.

Healthy environments are critical for human life, filtering our water, providing food sources, pollinating our crops, controlling diseases and providing cultural benefits. If PFAS harms key species’ ability to live or reproduce, Hoverman said, “that can have a cascading effect on human health and wellbeing.” 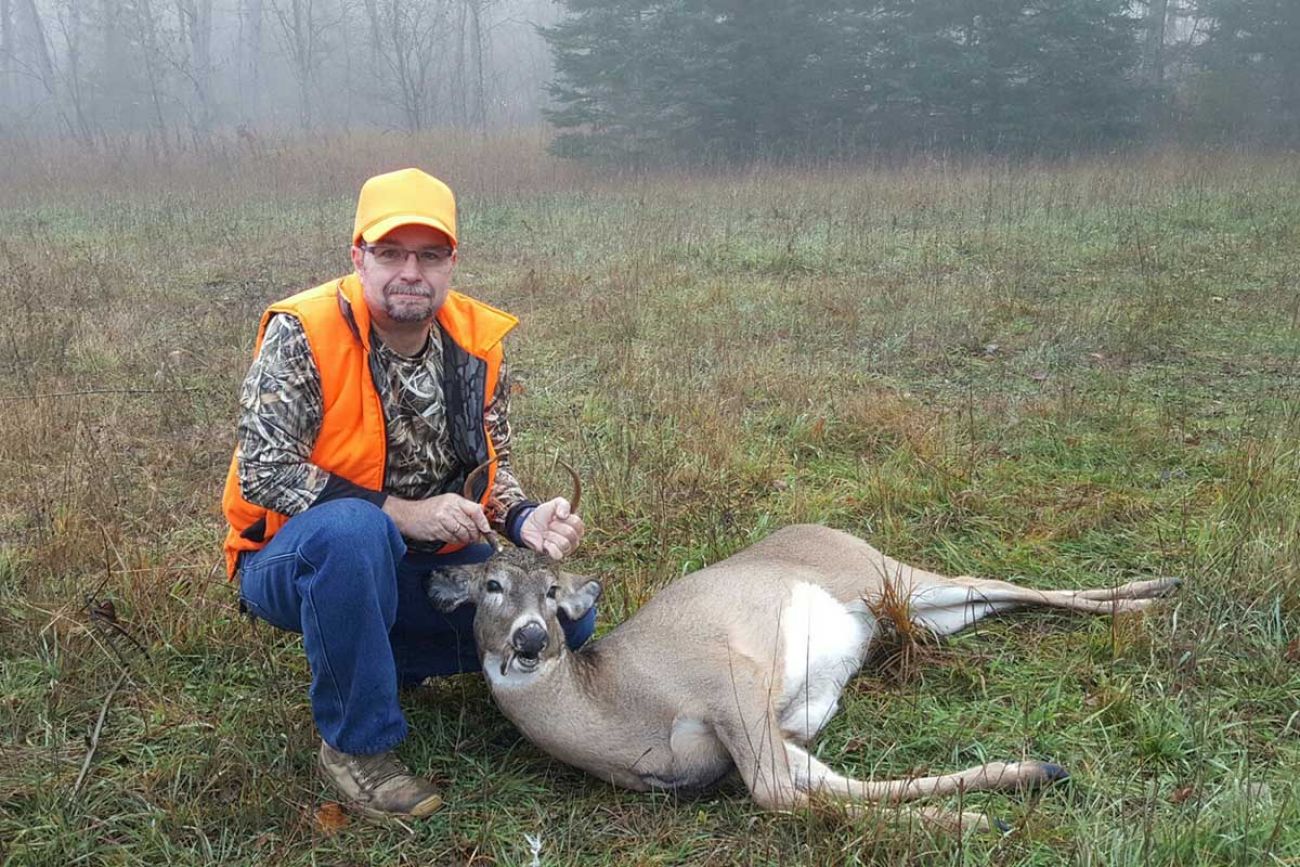 J.D. Hock poses with a 4-point buck he harvested from an Oscoda area family hunting property in 2016. (Photo courtesy of J.D. Hock)

As researchers search for answers, health officials continue to learn more about just how extensively PFAS has contaminated Michigan’s fish and wildlife.

Lake Superior smelt are not on Michigan’s fish consumption advisory list, and the state hasn’t tested them for PFAS compounds.

But “we consider the Wisconsin data to be rather reliable,” said Marcus Wasilevich, PFAS response coordinator at the Michigan Department of Health and Human Services, in part because Michigan and Wisconsin researchers obtained similar results when they tested other Lake Superior species.

Michigan regulators are holding off on issuing a smelt advisory of their own as they make plans to collect samples this spring from lakes Superior, Michigan and Huron, and some inland waters. If Michigan’s test results track Wisconsin’s, an advisory could follow.

The news out of Wisconsin is concerning, said Amy Trotter, executive director of the Michigan United Conservation Clubs, whose members include many hunters and anglers. But she agrees with the state’s decision to conduct its own testing before alerting anglers.

“We don't want (needless consumption advisories) to ever be a deterrent from hunting and fishing and taking advantage of the outdoors,” she said.

But the presence of high PFOS levels in a fish relatively low on the food chain, swimming in a large water body where contamination should theoretically be more diffuse, raises new questions about how the chemicals move through ecosystems.

Many environmental toxins grow more concentrated in animals’ bodies as they move up the food chain, in a process called bioaccumulation. Contaminated insects or minnows pass the toxins on to small fish that eat them. Those small fish, in turn, pass the contamination onto bigger species that prey upon them.

But Wisconsin’s discovery of high levels in smelt, a species low on the food chain, indicates that PFAS “doesn't seem to follow the same rules,” Wasilevich said.

Continued sampling and research, Trotter said, is crucial to better understanding where else PFAS has contaminated fish and wildlife, and how species respond once the poison stops flowing. The current MDHHS budget for fish, wild game and home-raised food testing is about $1.2 million. Environmental advocates contend Michigan needs more money and additional lab capacity to build a more robust testing regime.

There’s good news and bad news in what researchers know so far.

Fish in the 900-square-mile Huron River watershed are so contaminated, state officials warn against eating even a single serving from an area that spans five counties. But recent sampling indicates fish may quickly flush PFAS from their systems once the chemicals are removed from the water, said Daniel Brown, watershed planner for the Huron River Watershed Council.

After Tribar Manufacturing, a Wixom automotive supplier responsible for much of the Huron River’s contamination, installed filters to clean its effluent, concentrations in some fish samples dropped to about half of previous levels, Brown said.

The fish are still too toxic to eat, but Brown said the test results are “encouraging.” If the trend continues, he hopes Huron River anglers may soon be able to resume eating their catch.

Hoverman, of Purdue, cautioned that not every contaminated water body will heal so quickly once contamination stops flowing. Clark’s Marsh, for example, is relatively stagnant, meaning tainted water will be slow to drain away. And it’s unclear whether PFAS could persist in sediment after the water is clean.

Even the Huron’s promising news, he said, should come with a dose of caution. The PFAS that plagued the river hasn’t disappeared. It has merely flushed out to Lake Erie, after which it will travel to Lake Ontario and, eventually, the Atlantic Ocean. PFAS will eventually be present at low levels in all of the world’s waterways, he said, and researchers simply don’t know how that will affect the species that live there.

“It's really that constant low level of exposure that we need a lot more research on,” he said.

Back in Oscoda, Hock said he’s seen enough research to know the contamination at Wurtsmith needs to be cleaned up — for his sake and that of the fish and deer.

But it’ll be years before the Air Force completes a cleanup plan for Wurtsmith, and years more before cleanup is complete. So Hock has given up agonizing over all the ways it could be hurting him.