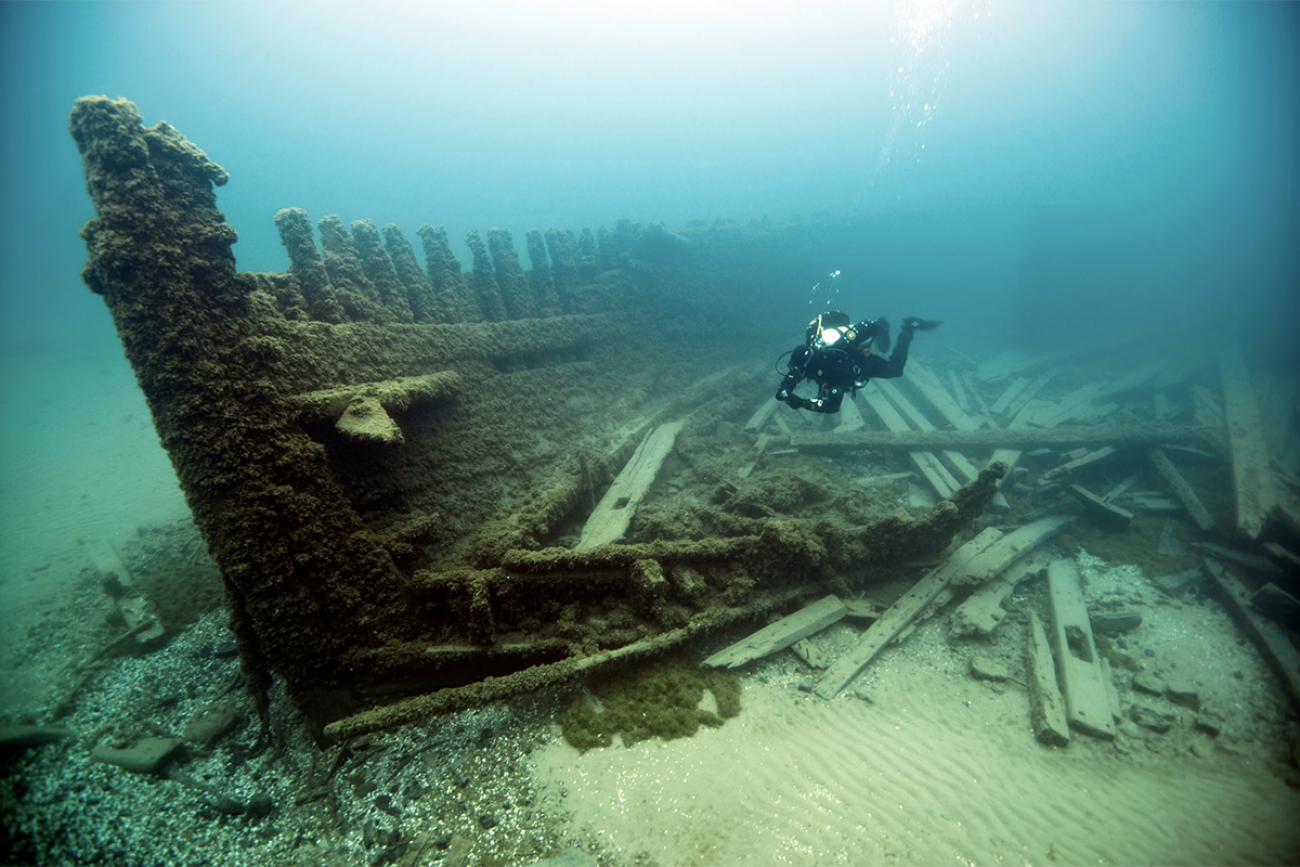 Leaders of the Thunder Bay National Marine Sanctuary estimate they’ve found roughly half of the shipwrecks hiding in the depths of Thunder Bay. More detailed maps of the lakebed floor could lead to new discoveries. (Courtesy photo)

ALPENA — While tourists whiz by on glass-bottomed ships and recreational boats cruise near shore, a 34-foot government research vessel bobs in the waves of Thunder Bay, doing work as tedious as it is important.

“We kind of joke that it’s like mowing the lawn,” said Michael Bloom, one of three National Oceanic and Atmospheric Administration (NOAA) scientists who take turns driving the boat. 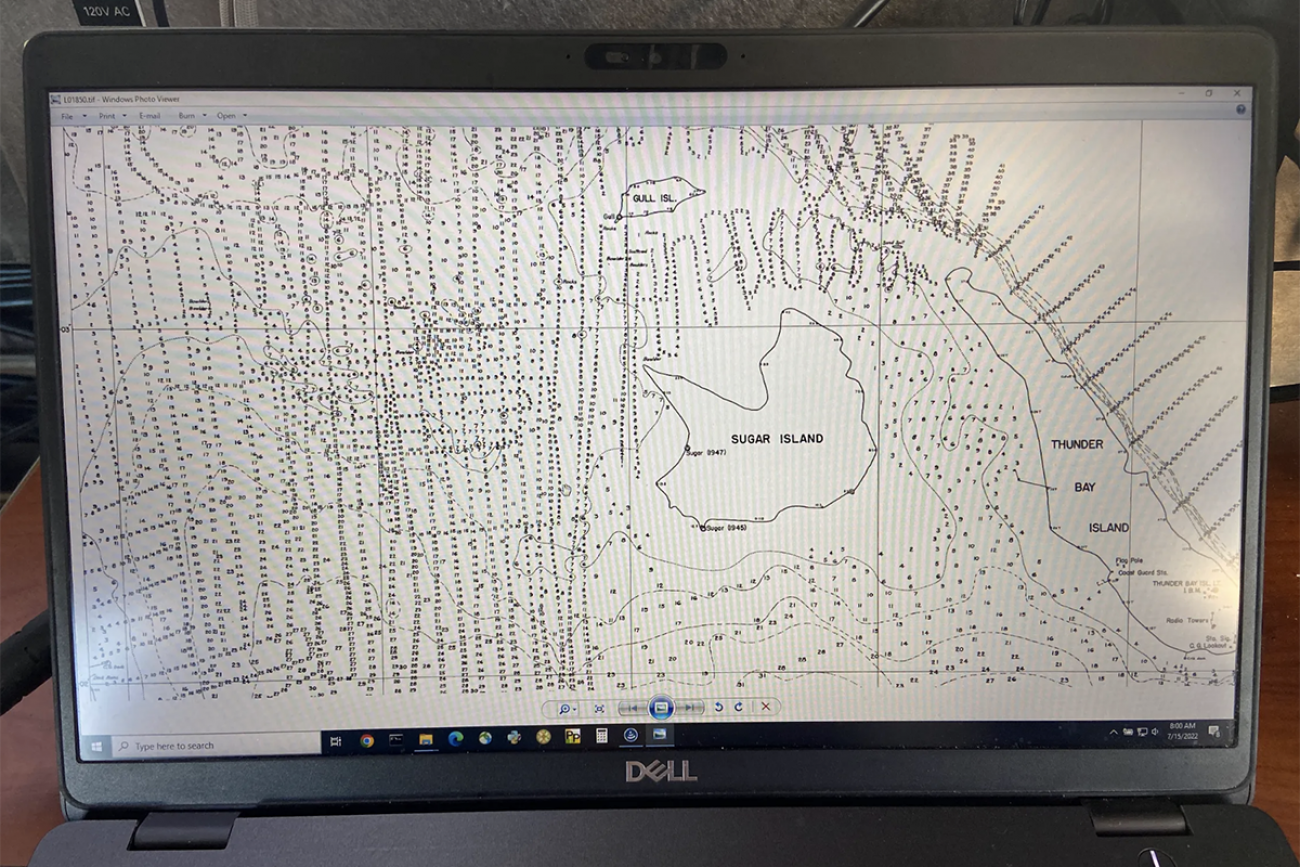 Across much of the Great Lakes, existing maps rely on lead-line measurements from decades ago. Thunder Bay still contains large areas with few data points. (Bridge photo by Kelly House)

Based out of New London, Connecticut, the NOAA navigation response team has been summoned to the Lake Huron bay to capture high-resolution sonar maps of a lakebottom teeming with dozens of undiscovered shipwrecks.

The ship putters along at seven miles-per-hour, making hundreds of passes back-and-forth down a narrow strip of water. After a month of this, it will have captured a high-resolution 3-D model covering about 13 square miles of lakebed in the 23,000 square miles of Lake Huron.

It’s one small step forward on a mission to map the bottom of all five Great Lakes, a system so sparsely-documented, some portions contain only one or two data points to cover an area the size of Detroit.

“We know the surface of Mars much, much better than we know the bottom of the Great Lakes,” said Hans Van Sumeren, director of Great Lakes Water Studies Institute at Northwestern Michigan College and a partner in the effort known as Lakebed 2030.

That poses a problem for scientists, who use topographic maps to document the lakes’ physical characteristics and habitat types, track the changes caused by invasive species and climate change, identify the safest shipping channels and uncover submerged artifacts.

Filling that data vacuum won’t be easy. So far, less than 15 percent of the lakes have been mapped at a high resolution. And recent efforts have added only a couple of percentage points per year.

But proponents of the effort are cheering recent investments, including the Thunder Bay project, as evidence that the effort is gaining momentum. 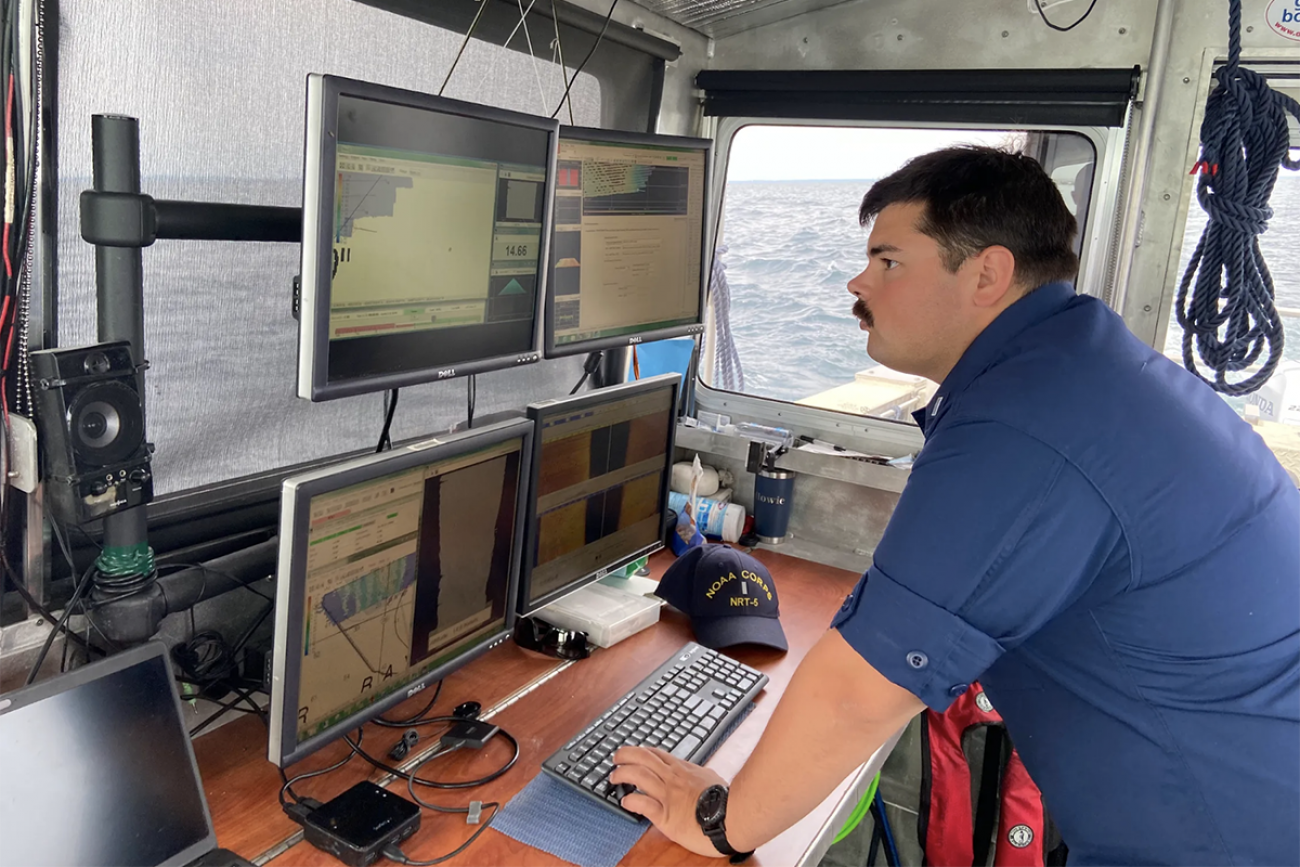 ‘The foundation of all science’

Inspired by a similar effort in the world’s oceans, a coalition of academic and government organizations in the U.S. and Canada have signed on to the ambitious goal to produce high-resolution maps of all five lake beds by 2030.

Gathering better data about the lakes’ depths, they say, is fundamental to managing and protecting the region’s most prized natural resources.

“There’s a lot we really don’t know about the Great Lakes, because our science and management and priority-setting for the region has been based on responding to emergencies as they arise,” said Kelli Paige, chief executive officer of the Great Lakes Observing System, a nonprofit that gathers and publicly disseminates Great Lakes data.

In other words, events like anchor strikes on Line 5 in the Straits of Mackinac, toxic algae during the 2014 Toledo water crisis, and well-established invasive species that rob the lakes of necessary nutrients.

The topographic maps not only reveal the depth and contours of the lakebottom, they provide baseline information necessary for researchers studying water levels and currents, or looking for clues on glacial geology, submerged cultural artifacts and underwater habitat.

“This type of mapping is the foundation of all science,” Van Sumeren said. Managing the Great Lakes without it, he said, is akin to managing a city with no idea where roads, sewers, hills and valleys are located.

In Thunder Bay, a half-heart-shaped body of water popular with divers, the NOAA team is interested in updating navigational maps used by boaters and ship captains. But sanctuary managers also hope the maps will help in searches for sunken ships in an area so full of them it’s nicknamed “Shipwreck Alley.”

Sanctuary experts have identified 99 wrecks preserved by Lake Huron’s cold, fresh water, but believe there may be just as many yet to be discovered. High-resolution lakebed maps can show subtle elevation changes in the sand, and sometimes make out the shape of a ship’s hull.

“If we see something that doesn’t look natural or normal, we go explore that further with divers or robotics,” said Jeff Gray, the sanctuary’s superintendent.

Today, most of the lakes’ high-density maps only document the shallows just offshore. That’s in part because earlier lake surveyors were focused on keeping ships from running aground — a concern that’s irrelevant in deep water.

As a result, vast stretches of the lakes’ deepwater remain largely uncharted. Those depths, said Paige, could provide crucial data to manage a lake system that provides drinking water for 40 million people across eight U.S. states and the Canadian province of Ontario, and supports fishing, shipping and other activities crucial to the regional economy and culture.

As climate change and invasive species transform the Great Lakes and increase the pressure on their resources, understanding those deepwater areas becomes even more important. Yet the best available data in many places comes from lead lines dropped off the edge of boats generations ago to measure water depth.

Those measurements are often remarkably accurate. But they don’t reveal whether the lakebottom is rocky or sandy. They can’t make out shipwrecks or prehistoric artifacts from societies that lived on once-dry land beneath the modern lakes. And they may miss obstructions that could endanger passing ships or complicate underwater infrastructure projects.

Existing high-density models of the lakebed have already aided important research, including the discovery of a 9,000-year-old caribou hunting camp in Lake Huron. The Lakebed 2030 maps would be open-source, Paige said, making them usable by boaters, shipwreck divers, fishing crews and other members of the public.

“There's nothing about the technology that is stopping us from getting there by 2030,” Paige said.

But costs pose a challenge.

These missions aren't cheap: In Thunder Bay, NOAA team lead Nick Azzopardi estimated the boat and its equipment alone are worth more than $1 million, plus the cost of gas and pay for its crew. Larger vessels capable of mapping deeper areas can cost more than $1,100 per hour to operate.

A study last year concluded it would take seven years and $200 million to complete the lakebed maps. So far, there is little dedicated money for the effort, leaving proponents to tap into existing federal research funds and lobby lawmakers for cash.

The initiative’s backers have received interest from U.S. Representatives Debbie Dingell, D-Ann Arbor, and Lisa McClain, R-Romeo, who has requested $45.1 million in an initial federal appropriations package to support the mapping push.

In a statement to Bridge Michigan, McClain called Lakebed 2030 “an important project that will benefit our state for decades.” Dingell called the resulting data “critical” to lake conservation efforts.

While backers search for funding, NOAA has driven the project forward with “a big push” to boost its research presence in the Great Lakes, Azzopardi said.

The agency has deployed mapping crews to the lakes each of the past several years, documenting areas ranging from the Straits of Mackinac to the Chicago Harbor. And this year, NOAA deployed a large research vessel to the basin for the first time in decades. The 208-foot Thomas Jefferson has been in Lake Erie since spring, mapping near Cleveland and Put-in-Bay, Ohio, and Presque Isle, Pennsylvania. 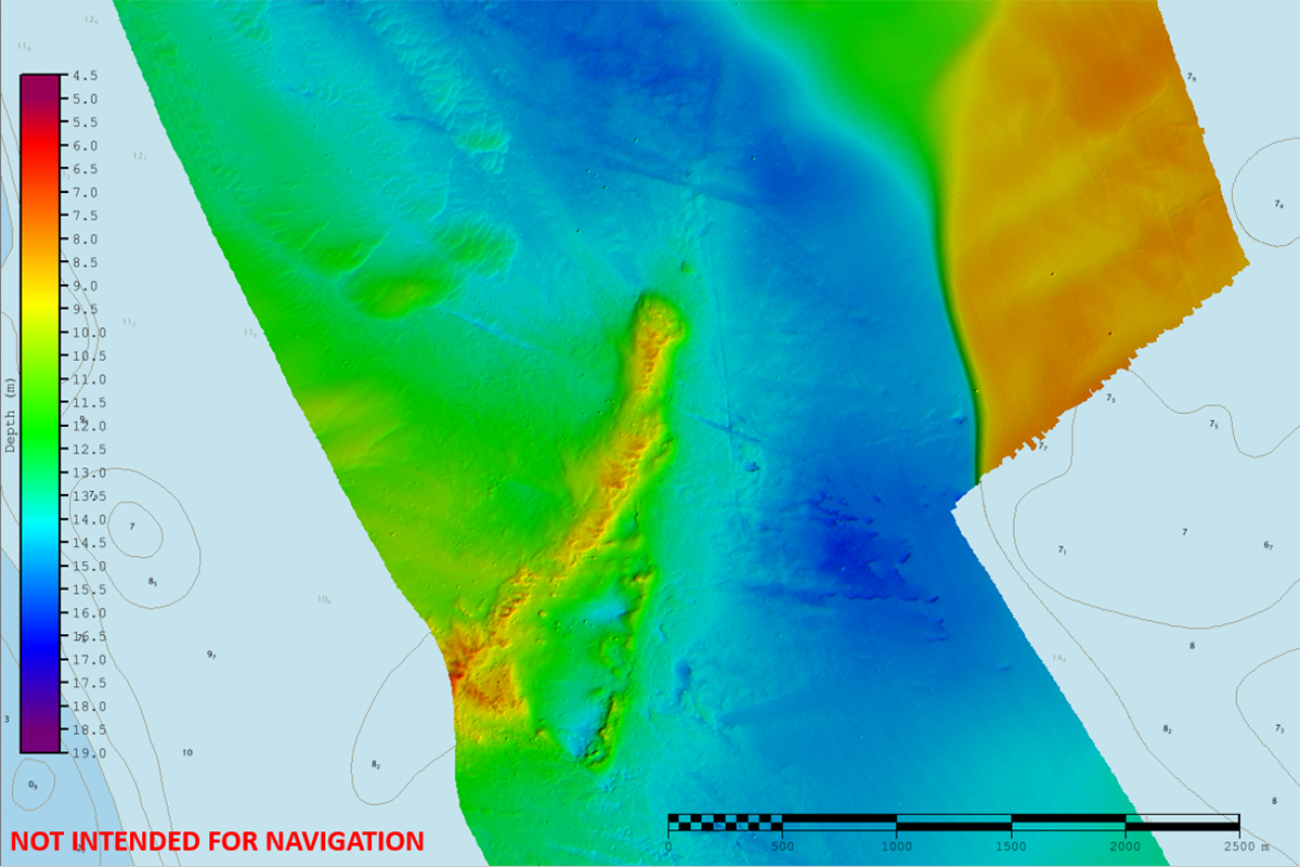 In Thunder Bay, NOAA crew members passed the monotonous hours offshore by listening to music or audiobooks, and scanning a bank of computer monitors for anything abnormal.

Azzopardi piloted the boat while a “multibeam echosounder” attached to its hull transmitted sound waves across the lakebed, calculating depth based on the time it took for the echos to return. A second device, known as a side scan sonar, collected more detailed imagery of the features along the bottom.

Onboard computers transform the data into 3-D models on computer monitors. As the research boat passed over the remains of the Oscar T. Flint, a wooden steam barge that sank in 1909, the wreck’s silhouette showed up in bright orange against the shadow of the seafloor.

Azzopardi and crewmate Howard Meyers hoped to discover a new shipwreck before their mission was complete.

“Today’s the day!” Meyers proclaimed as the boat rounds another corner on its zig-zagging journey.

Instead, the screens broadcasted an endless stream of rocks and sand. The crew has since moved on to the Wisconsin Shipwreck Coast National Marine Sanctuary in Lake Michigan, still holding out hope for a new discovery.