Asian carp could survive in wider portions of Lake Michigan than scientists previously believed, according to a new University of Michigan study. The findings could ratchet up pressure on Congress to fund a barrier to prevent the invasive fish from wreaking ecological havoc across the Great Lakes and threatening its $7 billion fishing industry.

The study, published Monday in the journal Freshwater Biology, examines Lake Michigan’s suitability for silver carp and bighead carp, some of the most destructive species to invade North American waters.  Natives of China, the fish have already spread across the Mississippi River Basin and Illinois River, and they lurk perilously close to Lake Michigan. They crowd out native fish by gobbling up their food, and they can overconsume shoreline plants and degrade water quality.

Previous studies suggested Lake Michigan’s dwindling levels of plankton and algae — due to less phosphorus pollution and the voracious appetites of invasive zebra and quagga mussels — might prevent Asian carp from growing established.

But Asian carp can survive and even grow while eating other foods such as dead organic matter called detritus, according to Monday’s study. Lake Michigan is full of detritus, which includes nutrient-rich poop from trillions of invasive mussels covering its lakebed.

Earlier studies did not consider Asian carp’s flexible diet, nor did they examine where carp could live more than a meter below the lake’s surface. The University of Michigan researchers looked deeper — creating three-dimensional models of Lake Michigan’s suitability for Asian carp. 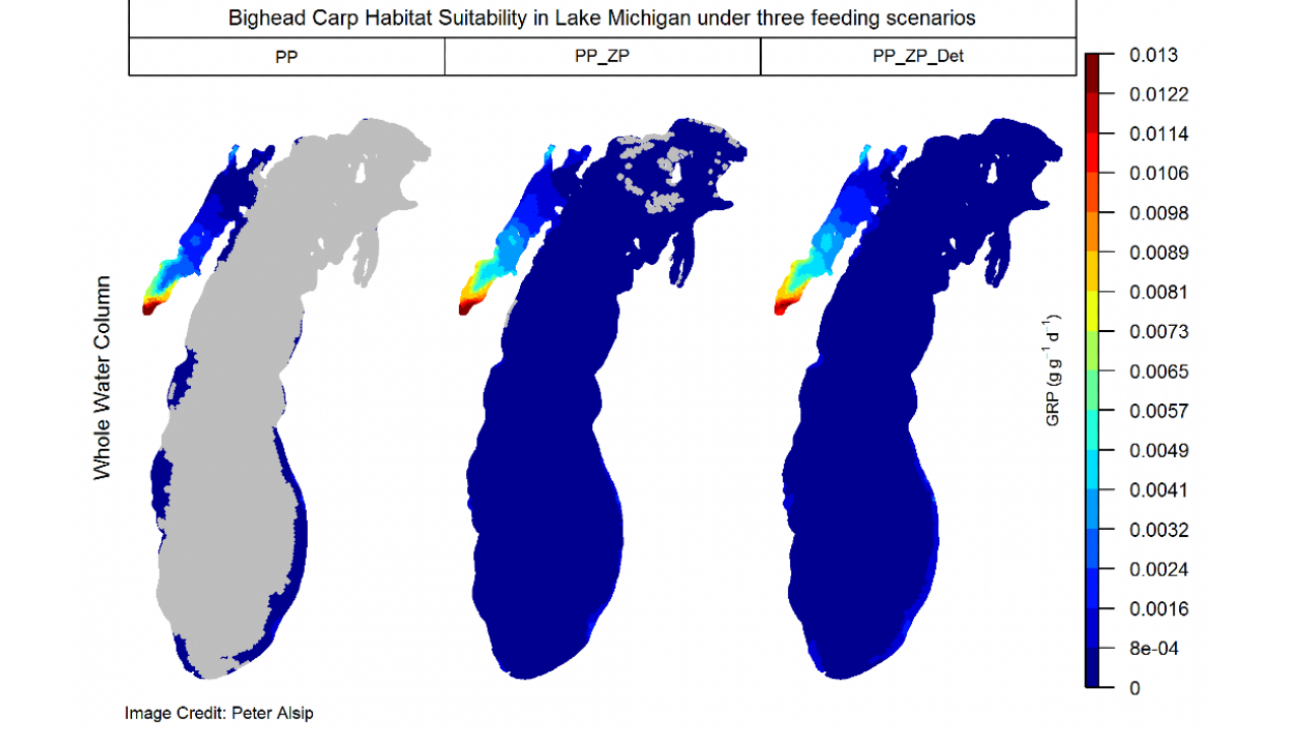 During certain times of year, nearly all of Lake Michigan could support bighead carp somewhere in its water column, the study found. (Silver carp, however, would remain confined to river mouths and other nutrient-rich waters near shores.)

That means bighead carp, which can weigh nearly 110 pounds, could survive long swims from one prime Lake Michigan feeding spot to another, said Peter Alsip, the study’s main author and an ecological modeling data analyst with the U-M-based Cooperative Institute for Great Lakes Research.

“This research highlights and reinforces the importance of preventative actions — installing infrastructure that can keep this fish out,” Alsip said. “These fish are really hardy and resilient, and they're highly invasive throughout the world.”

Bighead and silver carp were imported to the southern United States in the 1960s and ’70s— intended to control algae and weed growth in fish farms, canal systems and sewage lagoons. They escaped and spread across the Mississippi River Basin. With few natural predators, Asian carp dominate the waters they invade, outgrowing native predators within a year. That’s the case in the Illinois River where invasive carp comprise more than 90 percent of the weight of all fish, according to a 2017 report from the Great Lakes Sea Grant Network.

Asian carp are seen as a major threat to walleye, yellow perch and whitefish if they invade Lake Michigan and spread.

The U-M findings come as the federal government is moving forward on a $778 million plan to build a barrier to keep the carp out of Lake Michigan following years of delays.The U.S. Army Corps of Engineers in May submitted a request for a project at the Brandon Road Lock and Dam near Joliet, Ill. That’s on the Des Plaines River, part of the link between the Illinois River and Lake Michigan. The project would carve a new channel and add an electric barrier, noisemaker and air bubble curtain to prevent fish from swimming upstream.

Eight Great Lakes state governors and two Canadian premiers support the plan, which would require the local governments to chip in.

Congress must still approve it, and Republicans and Democrats in Michigan’s delegation have called for their colleagues to do so.

“This study further underscores what’s at stake for our Great Lakes and way of life if Asian carp reach Lake Michigan,” she told Bridge Magazine in a statement. “I am laser-focused on completing the Brandon Road Lock and Dam project as quickly as possible to stop these fish from ever becoming established in our lakes and waterways.”

U.S. Sen. Gary Peters, D-Michigan, doubled down on his commitment to fund the barrier as well.

“The Great Lakes are not only an economic engine and source of drinking water to 40 million people — they are part of who we are as Michiganders,”  he said in a statement. “This study on Lake Michigan reinforces the urgent need to take every step possible to prevent the spread of Asian Carp and invasive species.” 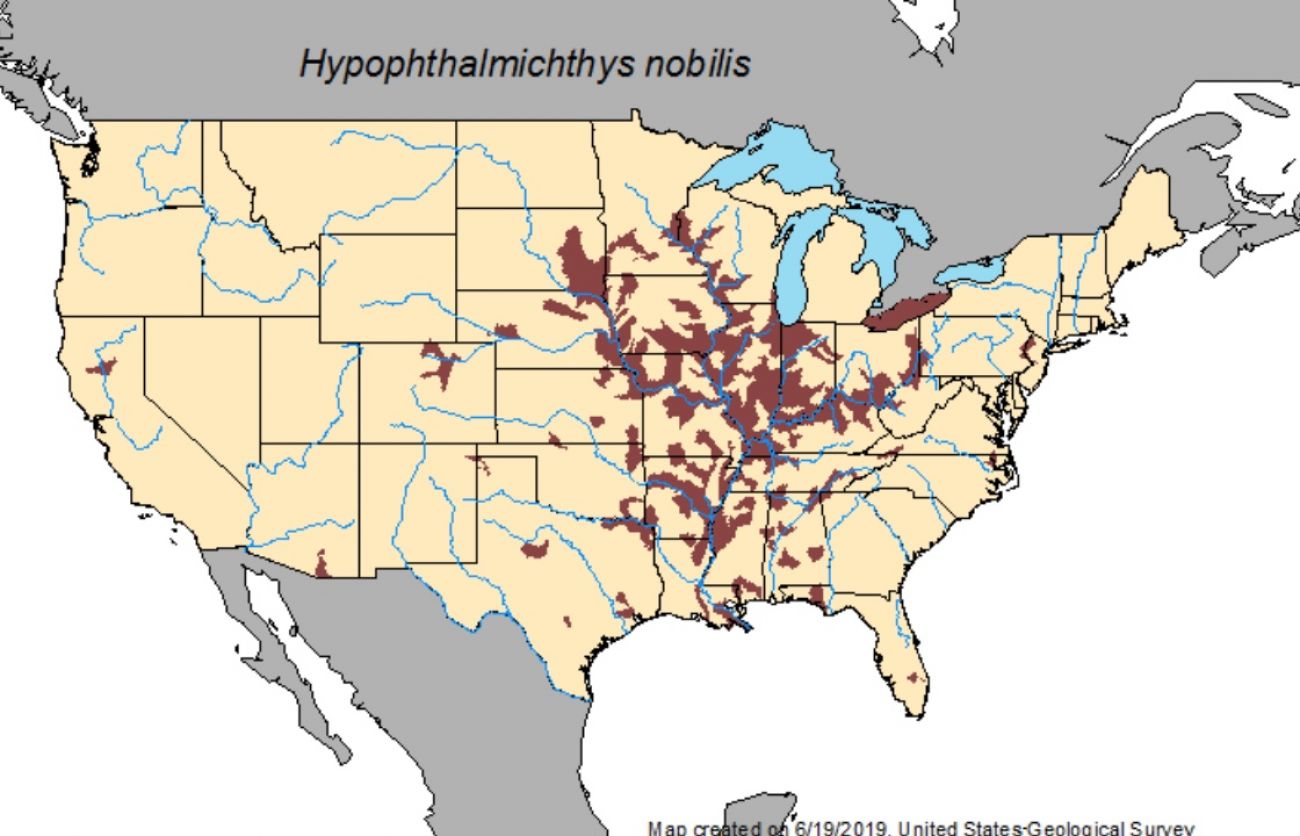 Drew YoungeDyke, a spokesman for the National Wildlife Federation Great Lakes Regional Center, called the barrier’s $778 million estimated price tag “a drop in the bucket” compared to the ecological damage invasive carp could inflict on Lake Michigan and waters they might spread to next.

“There’s no failsafe. If they get into Lake Michigan, they’re going to survive, and we can’t allow that,” he said.

YoungeDyke added that Congress should move as quickly as possible to fund the barrier’s pre-construction and design — and then approve the entire project. That might require Great Lakes lawmakers to support projects to reduce carp numbers throughout the Mississippi River Basin.

“In order for Congress to move this, it’s going to have to get support from all over the country, not just in the Great Lakes,” YoungeDyke said.