Outdoor recreation contributes $10 billion annually to Michigan’s economy, according to new data that confirm the importance of the industry that is spurring growing jobs, talent and spending from Monroe to Marquette.

The data, released Friday from the federal government’s Bureau of Economic Analysis, shows that Michigan’s boating industry is the fifth largest in the nation, while the state ranks seventh in recreational vehicle activity.

All told, 127,000 jobs are tied to the outdoor recreation industry, which  accounts for an estimated 2 percent of the state’s $505 billion economy.

The study is the federal agency’s first on a statewide basis of such spending. Although its estimates are lower than those provided by industry groups, the data could provide a blueprint to state officials trying to grow recreation as an industry.

“Michigan is well positioned to take advantage of [outdoor recreation],” said Brad Garmon, who was named the first executive director of the Michigan Office of Outdoor Recreation Industry, an office Gov. Gretchen Whitmer created in May.

Across the state, government officials and entrepreneurs have come to the same conclusion. Volunteers and governments are working to develop biking and water trails, while employers and chambers of commerce are touting the state’s outdoor pursuits.

In Marquette, the UP Health System pursues outdoor enthusiasts, using testimonials from its doctors extolling the virtues of year-round biking, skiing, hunting and fishing.

“We couldn’t keep talent up here,” said Candy Fletcher, a tourism consultant who lives just west of Marquette and worked with the hospital on its talent campaigns.

Now regional groups are building trails – more than 200 miles, up from 75 miles less than a decade ago – and attracting people not just to visit but to stay.

Marquette is among the younger parts of northern Michigan and not just because it is home to Northern Michigan University. Like Traverse City, which also is promoting its outdoor assets, Marquette has seen residents’ incomes and educational levels climb. 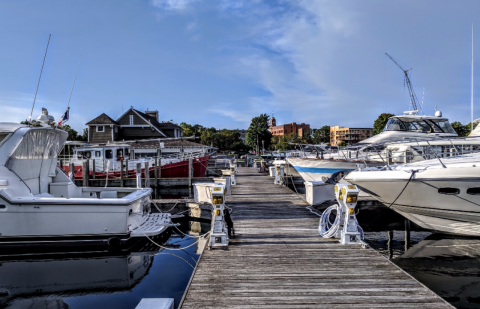 Traverse City is growing too, as is the northwest corner of the Lower Peninsula. Part of the reason: Selling newcomers on the same things that had been used to attract the visitors that have made the region a huge tourist draw; it’s one of the main draws of the local tourism bureau.

Officials said outdoor recreation is a big part of the growth –  the city has many cycling, running and fishing shops that promote active lifestyles.

The push to take advantage of outdoor recreation comes as many Michigan counties are aging rapidly – the state has the highest number of counties with a median age of 50 or older.

The median age is 40 in Traverse City and Marquette, the same as the state, but well below nearby cities and counties.

Garmon said he was at an outdoor retailer convention in Denver in June and ran into several former Michigan residents who had taken their outdoor recreation business ideas to Colorado. He’s now working with others in state government to work on luring them home.

“I think we can pull them back,” he said.

The BEA examined at the impact of recreational industries, focusing on the manufacture of goods as well as their sale. It’s why Indiana is No. 1 in recreational vehicles –  not because of trips to campgrounds but the huge size of its RV industry in northern Indiana.

Overall, Michigan was No. 13 in total impact from outdoor recreation. That’s on par with the size of Michigan’s economy in general: The state is 14th nationwide in total gross domestic product, federal records show.

The federal government’s figure on outdoor recreation is lower than those used by industry groups.

Nationwide, a number of activities that have big followings in Michigan have seen some of the biggest growth. Though not broken down state-by-state, dollars generated by biking, kayaking, sailing and snowboarding rose more than 20 percent between 2012 and 2017.

Fishing, which is big in the state, was one of the few pursuits that saw tepid growth –  just under 4 percent.

And though snow activity rose nearly 9 percent, the big growth was in skiing (16.5 percent increase) and snowboarding (20.4 percent) while snowmobiling, traditionally popular in Michigan, was down 2 percent.