Pictured on the left prior to restoration in 2018, the Lower Muskegon River site reconnected 53 acres of natural floodplain wetlands to the Muskegon River, a tributary of Muskegon Lake. The restoration was completed in 2021, pictured on the right, after the removal of a historic farm dike and restoration of the wetland area. (Photos courtesy of GEI Consultants)
August 11, 2022
Audrey Whitaker, Circle of Blue
Michigan Environment Watch
Great Lakes News Collaborative

Before the United States and Canada formally declared Muskegon Lake an “area of concern” the 4,149-acre expanse of polluted, sediment-choked, debris-congested water at the mouth of the Muskegon River was so repulsive that only rats and hungry gulls plied its shores.

More than a century of abuse by sawmills, chemical plants, energy installations, and raw sewage produced conditions so vile that by the early 1980s the lake was all but ecologically dead. In 1987, under the provisions of the Great Lakes Water Quality Agreement, a joint U.S.-Canada pact to clear pollution from the waters of the Great Lakes, Muskegon Lake and its tributaries were designated as one of 43 similarly polluted areas of concern; 26 are located in the U.S.,12 are located in Canada, and five are shared by both countries.

The history of toxic cleanups in the U.S. includes ample evidence that the work is expensive and success is achieved over decades. That is certainly the case with Muskegon Lake. Last May, local, state and federal officials gathered at Heritage Landing, a former industrial-scrapyard-turned-waterfront park on Muskegon Lake’s south shore to declare that the $70 million project to cleanup, remediate and restore Muskegon Lake was complete.

“There is no law, there’s no private cause of action, there’s no ability to sue within the water quality agreement,” said Jon Allan, senior advisor at the University of Michigan School for Environment and Sustainability, and U.S. co-chair of the Great Lakes Water Quality Board. “All it says is the two governments see a common problem, and they say ‘we’ll work on this together.’” 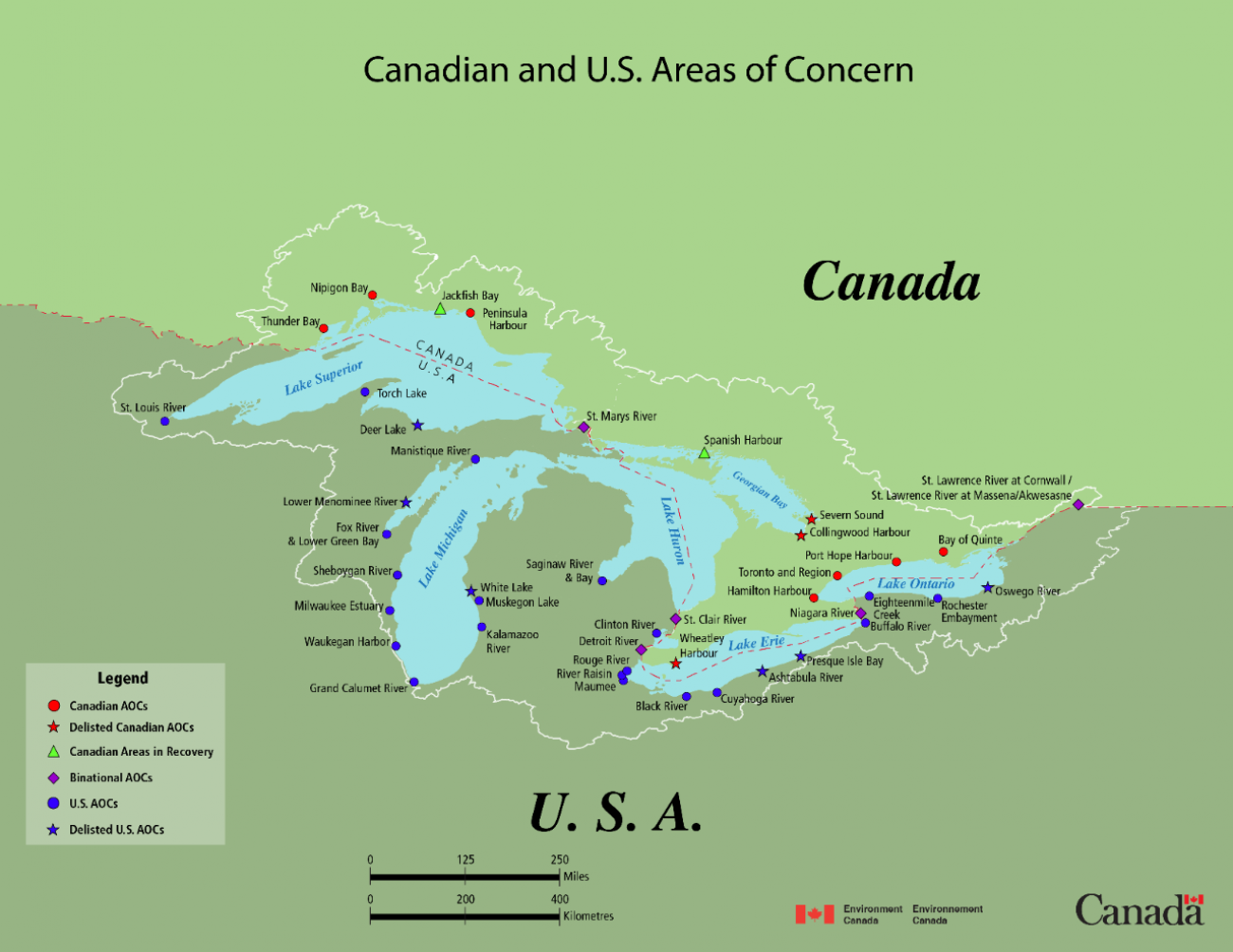 43 areas of concern were identified by the United States and Canada in the 1987 Great Lakes Water Quality Agreement. Of these 43, nine have been delisted. (Courtesy of the Government of Canada website)

In Muskegon, life after delisting holds the promise of economic revitalization. With the conclusion of cleanup efforts on Muskegon Lake, the area has seen an increase in property values and tourism, illustrating the intrinsic connection between the community and its shoreline.

This has spurred enthusiasm in the community, which has struggled to overcome economic depression throughout its history and to establish itself as a tourist destination on the Lake Michigan shoreline.

While this enthusiasm and sense of accomplishment is important, after delisting, community leaders must grapple with the perception that their work is done.

The indicators of water health identified in the 1980s do not address issues such as climate change or invasive species, all of which amplified after the GLWQA was signed 50 years ago.

While the EPA recognizes these issues and their effect on the Great Lakes region, they are not part of the AOC program, said Al Steinman, director of the Annis Water Resources Institute in Muskegon, Michigan.

“Every AOC, I don’t care where you are, that’s already been delisted or will be delisted in the future still has ecological problems that need to be addressed,” Steinman said. “The key, then, is how do you communicate that to a community after it’s been delisted and you’ve had this huge celebration to get off the list?”

In Muskegon, PFAS contamination remains a major detriment to the health of the lake, along with the presence of harmful algal blooms.

Eric Kuhn,executive director of the West Michigan Shoreline Regional Development Commission, said that maintaining a relationship with local stakeholders and creating a long-term management plan is key to maintaining the restoration work and to future stewardship.

Muskegon has been fortunate, given the close proximity of the Commission, Grand Valley State University’s Annis Water Resources Institute, Muskegon Lake Watershed Partnership and NOAA’s Lake Michigan field station. There are natural opportunities for partnerships in the area, Kuhn said.

“Having those strong partnerships really made us be able to accomplish [restoration efforts] faster,” Kuhn said.

“It’s their community’s future, and it’s ultimately their responsibility when the state and federal funding is shifted to other areas,” said Collin Knauss, who serves as the project development manager for the Great Lakes Protection Fund. 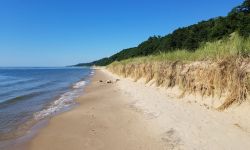