The advertising onslaught is just beginning

Republican John James is closely matching the level of campaign spending of his opponent, Gary Peters, in what is predicted to be a close race. Peters has a far more significant presence on Facebook.

LANSING — The election is here, and it’s here to stay.

Early voting officially began in Michigan Thursday and more than a third of eligible voters have requested absentee ballots. Some likely already have their ballots or have voted in person at their local clerk’s office.

It's the most crucial period to influence voters and drive turnout. Michiganders know it; the advertisements are unavoidable. True to most predictions, this election is already shattering previous spending records in Michigan with a deluge of advertising, according to spending data from Advertising Analytics analyzed by the Michigan Campaign Finance Network (MCFN).

There will likely be more than $100 million in presidential ad spending this cycle, with more than $25 million to be spent in the coming month, if Michigan remains in play and reserved airtime holds.

The U.S. Senate race is poised to double the cost of the last cycle’s total spending in that election with broadcast ad spending alone. That 2018 total, $36.5 million, was passed at the end of August. And there are many more ways the campaigns and dark money groups can and have spent.

It’s in part because the traditional crunch time for advertising has been pushed back by weeks, then spread out by over a much longer period. Matt Resch of Resch Strategies, a public affairs firm, said this year’s approach is “just a complete game-changer.”

“It kind of lengthens the campaign and allows you a little more time, but at the same time without knowing when anyone's going to vote, it's going to really ramp up and make you need to focus your resources on a more long-term level,” Resch said.

“You have to sort of surf the wave, so to speak,” said Adrian Hemond, CEO of Grassroots Midwest, a consulting firm. “You can think about the distribution of how these ballots are gonna come back, kind of like a bell curve with short tails.”

Hemond said advertisers are trying to catch voters as they receive their ballots and advertise heavily for the next two weeks afterward. He said he then anticipates a relative decline before advertising again crescendos as Nov. 3 nears. For effective communication, campaigns should have already been spending heavily, he said.

Michigan is near the peak of that first wave, but a month from now an even larger wave of money looms. It is by all accounts an unprecedented year, and outside spending groups have done their part in a big way: They’ve outspent candidates in both the U.S. House and Senate races.

The campaign of Democratic presidential nominee Joe Biden has spent about $4 million advertising on Michigan television this week and $17 million this month, a staggering sum this far from Election Day. Between now and Nov. 3, Biden’s campaign and the dark money organizations supporting him intend to spend another $20.1 million on broadcast ads, at minimum.

All Republican groups have been outspent nearly three-to-one in the presidential race. GOP candidates often make more ad purchases closer to the election, but with just $8 million of Trump’s campaign coffers invested in the remainder of the election season, his commitment to Michigan may be waning.

It also illustrates the stark contrast in approach between the two campaigns. President Donald Trump’s own campaign spent a little less than $1.1 million this week, but it and related dark money organizations have higher spending planned closer to Election Day, underscoring their bet on in-person voting to carry the state.

Nearly $2.6 million has been spent on political advertising on the social media platform in the last week alone, but Republicans are also flagging there. Eight of the top 10 spenders on the site last week were related to the presidential election.

In the race for the U.S. Senate seat held by Gary Peters (D-Bloomfield Hills), his campaign has adopted a approach closer to Trump’s, spending consistently more than $1 million a week since September and plans to maintain that level through October.

Yet Peters will be outspent this week and through the next two weeks by the largest dark money organization supporting him, Senate Majority PAC. Peters’ challenger, Republican John James is closely matching his opponent’s campaign in TV spending in what is predicted to be a close race. Peters has a far more significant presence on Facebook, where his campaign was the fourth-highest spender on the site last week, spending about $98,000 to James’ $6,000.

Races for the U.S. House are the one set of elections where spending may actually be down from the last cycle, however. There has been $27 million in broadcast ad spending there so far this cycle, though there’s lots of time for that to change.

For candidates running for the Michigan House of Representatives, their ads are in the mail and either running or slotted to run on television. More than $1 million has already been spent on general election TV ads for Michigan house races, and at least another $1 million will be spent in the next week. That total has been increasing by about $250,000 a day.

In total, there is more than $4 million spent or planned to be spent thus far for Michigan House races. Just two districts, the 39th and the 61st, comprise more than a quarter of that total.

These represent some of the most tightly contested races for the Michigan House, where Democrats haven’t held a majority since the 2010 election. They currently have 52 seats to Republicans’ 58. It’s the hope of electoral reformers that redrawn legislative districts from an independent commission in the coming year will upend the concentration of money.

Nearly 5% of the broadcast spending thus far for these seats has come from a single super PAC, the recently formed Prosperity Michigan Action Fund.

The super PAC has spent about $200,000 to run ads supporting Democrats in competitive house districts, including Julia Pulver in the 39th district and Dan O’Neil in the 104th district. So far they’ve outspent Pulver’s campaign on TV and radio.

The action fund’s Facebook page has run just about $3,000 worth of ads supporting these candidates. There are also running ads in favor of Democrat Christine Morse, who is running for the 61st district. All three are challengers hoping to flip their districts.

Because of how recently it was created, the PAC has not had to disclose any of its funding.

They are closely tied to a nonprofit called Prosperity Michigan and both entities are registered in Michigan to Hugh Madden, who has run communications for a number of liberal organizations in the state. A board member, Gilda Jacobs, is the president of the Michigan League for Public Policy. Another was formerly a senior official within the United Auto Workers.

Their backing seems to lie in Washington, D.C., and the largesse of the firm Arabella Advisors. It manages both the Sixteen Thirty Fund and the Hopewell Fund, major liberal dark money organizations. Prosperity Michigan’s Facebook page had previously been named Michigan Families for Opportunity, an alias that had been claimed by both organizations at one time.

Madden provided a statement to MCFN via email, saying, “We engage in elections to make sure the voice of the hard working families we represent is heard. We comply with all applicable campaign finance laws and requirements for political action committees in Michigan and plan to file any and all required reports and disclosures at the appropriate time.”

He did not respond to questions about the organization’s affiliation.

Most Republican spending has come with the financial help of the House Republican Campaign Committee (HRCC), which has outraised its Democratic counterpart by about $2 million this election cycle and had about $3 million more in cash as of the last filing deadline in July. It can spend unlimited amounts to support its candidates and has flexed its resources with a slew of ad buys across a number of crucial districts.

The HRCC’s control over these ads has shown. MCFN found footage of at least five Republican house candidates speaking to the same police officer at the same location in television ads currently running. Images of the candidates conversing with the unnamed officer also appear on campaign mail. In footage where the officer’s shoulder patch is visible, the name of the township appears to have been obscured.

A spokesperson for the HRCC had not responded to a request for comment as of press time.

Simon D. Schuster is executive director of the Michigan Campaign Finance Network, a nonprofit organization dedicated to highlighting the role of money in Michigan politics. 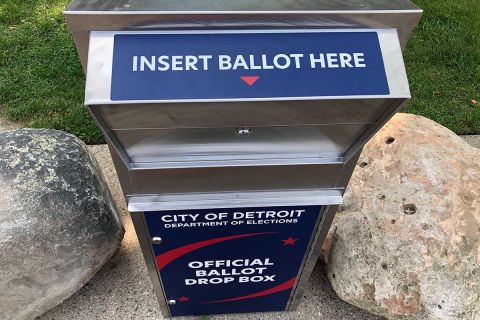 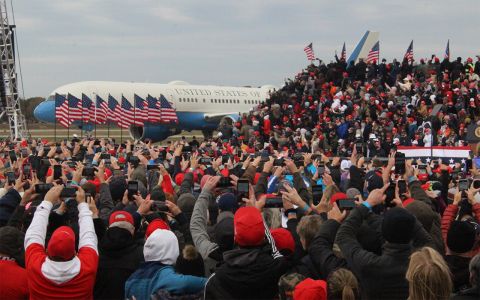 John James is a Trump wannabe, a lying crybaby who got his money from his rich daddy. He's just like Trump except for the bonespurs.