Michigan Secretary of State Jocelyn Benson declined an invitation from Rep. Matt Hall, R-Marshall, to testify before the Michigan House Oversight Committee, accusing the committee of “amplifying already debunked conspiracy theories and previously disproven claims” in previous sessions, in a letter she published Wednesday on Twitter.

Benson, a Democrat, said she “cannot in good conscience accept” the invite from Hall, saying the hearings on election oversight are “undermining the integrity of the election and wounding our democracy.”

Earlier this month Rudy Giuliani, the former mayor of New York City who is serving as attorney for President Donald Trump’s campaign, appeared before the same committee, bringing many witnesses who made largely debunked claims of electoral fraud in the state of Michigan. Trump and his associates have disputed President-elect Joe Biden’s 154,000-vote victory in the state, and multiple failed lawsuits have been filed in the state hoping to overturn the results of the 2020 election.

“The hearing was deemed such an embarrassment, lacking in merit and any form of decorum, that it was mocked on national comedy shows as a clear waste of taxpayer dollars,” Benson said in her letter.

The results of the 2020 election in Michigan were certified by the bipartisan state Board of Canvassers on Nov. 23. On Dec. 14, the state’s 16 electoral votes were officially cast for the President-elect.

“This is about people, not politics. The electoral votes for Michigan have been submitted. But people in Michigan still have questions about their state’s elections and those questions deserve answers,” Hall said in a statement responding to Benson’s letter, “I fear we are headed for more distrust in the future if people are denied clarity and transparency from officials who head up the process.”

On Tuesday, the CEO of Dominion Voting Systems, John Polous, testified in front of the state legislature, also at the request of Michigan Republicans. Polous denied the many conspiracy theories regarding his company's involvement with foriegn governments or potential security breaches in their systems.

“I look forward to having a conversation with any willing lawmakers about reforms and improvements we can make going forward for future elections,” Benson added in the letter.

“Most importantly, the state legislature must better support our local election administrators. They are resourceful, resilient and dedicated public servants who will always find a way to serve their community no matter how many challenges are placed in front of them.”

Hall said in his statement that “House and Senate Oversight Committees have previously heard testimony from multiple county clerks from both parties on what they saw and what can be done to better Michigan’s election system in the future – and those conversations and ideas were extremely constructive and helpful.”

“Our committee would like to have similar discussions with Secretary of State Benson, and I am disappointed she is brushing aside that opportunity while making excuses and playing cheap political games,” he added.

Benson’s office announced a comprehensive audit of the 2020 election last week that will include a review of the accuracy of ballot counting machines, a “hand-tally of every ballot” in Antrim County — where the clerk’s office said human error led to initial results being misreported, as well as procedural audits of over 200 precincts. 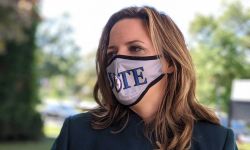