LANSING — The pandemic may be winding down, but a backlog at the Michigan Secretary of State caused by it continues to vex lawmakers in Lansing.

Both Democrats and Republicans acknowledge they need to fix a system that has left an unknown number of 7 million drivers with lapsed car registrations — and waits for appointments that can take weeks at Secretary of State branches.

Democrats want to divert federal stimulus funds to hire more staffers and increase the number of branch appointments that are made available every day. Republicans want to reopen more branches and oppose Secretary of State Jocelyn Benson’s end of walk-in service.

The standoff comes as two Democratic representatives, Julie Brixie, of Okemos and Stephanie Young of Detroit, this week introduced bills to spend $25 million to pay for overtime and hire 200 workers through Sept. 30 to provide 500,000 additional appointments over the next three months.

“We've never been in a situation where the Secretary of State's office has been forced to process a 13-month backlog on top of their normal business, much less requiring them to meet this unprecedented demand with huge staff reductions,” Brixie told reporters. “As legislators, our job is to identify problems and work with the parties involved to solve that .”

The backlog was created after lawmakers repeatedly extended registration deadlines during the pandemic, and many drivers waited until they ended to renew licenses, said Tracy Wimmer, a Benson spokesperson.

She couldn’t quantify the backlog.

“It is a …  bottleneck, but ultimately will be temporary once we can work through it,” Wimmer said.

House Oversight Committee chair, Rep. Steve Johnson, said he has “no interest” in considering the bills as long as Benson refuses to allow walk-in service at branches.

“Quite frankly, I'm not interested in throwing more money at the Secretary of State,” said Johnson, R-Wayland. “You have an appointment-only system now that requires you to wait for months before you get in, and she's refusing to allow walk-in visits.”

Last summer, Benson moved the department to an appointment-only system in response to the coronavirus pandemic. Last month, she announced the move was permanent.

Benson and her department have received criticism from Republicans and customers who can wait weeks or even months to get advanced in-person appointments to get a driver’s license or to transfer a vehicle title.

Every branch in the state releases next-day appointments twice a day but they tend to be booked quickly. Republicans and others say the system hurts older drivers and those without reliable Internet access.

Johnson said he’s not sure the Secretary of State needs more money.  The department’s recommended budget for fiscal year 2022 is $252 million.

“I get that’s how Democrats think, they see a problem, they think we just need more taxpayer dollars,” Johnson said. “Let's try to allow for the walk-in visits again.”

Benson said she doesn’t want to go back to that system, which she said routinely caused long waits for service.

“Reverting to a take-a-number system does not address the underlying supply and demand issue,” Benson said this week. “It merely creates more avenues for partisan politicians to attack a broken system.”

Benson is trying to encourage more people to use the internet for basic transactions. She said people seem to approve of her plans to modernize the Secretary of State because its online ratings have increased.

“The answer is not — as we have repeatedly told lawmakers — to reject a new model that is working and very popular and replace it with a failed system that was inefficient and broken,” Benson said. “That's why I've asked our legislators to support our work, because if they listen to their constituents, they'll find that it is what they support, too.”

Get ready for a wild 2022: Michigan campaign fundraising off charts already 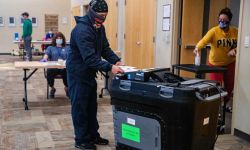 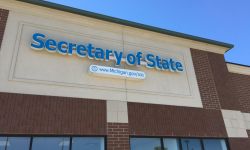