Sidney Powell was among a slew of attorneys sanctioned by a federal judge Wednesday for pursuing a meritless lawsuit aimed at overturning the election defeat of President Trump last November. (Devi Bones / Shutterstock.com)
May 19, 2021
Sergio Martínez-Beltrán
Michigan Government
Michigan Secretary of State

LANSING — A pair of bills in a Republican package to reform Michigan elections would allow observers to record and broadcast vote counting, drawing concerns about privacy and intimidation from municipal clerks.

One bill, SB276 would allow election inspectors, challengers and poll watchers to record and photograph the counting of the votes. Another, SB275, would allow video recording and live broadcasting of elections audits.

Sponsor Sen. Jim Runestad, R-White Lake, told the Senate Elections Committee on Wednesday the measures are in response to polls that found some voters don’t have confidence in the election system.

“The reality is that a large portion of our population has significant doubts about the election processes, election security,” Runestad said. “Shielding election concepts from the people only serves to multiply these steps to cause even more divisions.”

Those doubts, however, are largely split along party lines — and follow months of lies from President Donald Trump and others about the results of the 2020 election.

An April poll from NBC News found that while 77 percent of Republicans are concerned about ineligible people voting, a larger share of people — 58 percent of Americans, including 87 percent of Democrats — say their biggest concern is protecting access who are eligible to vote.

During the November election, Republican challengers tried to forcefully enter the TCF Center in downtown Detroit, where absentee ballots in Wayne County were being counted.

Many challenges ended up recording through glass windows, causing those inside the building to put up cardboard to protect those working.

“Having a camera on individuals is a form of intimidation, but also having that camera videotaping the processing of ballots could put the secrecy of the vote at risk, in addition to putting personal information out there and making it available,” Byrum told Bridge Michigan Wednesday.

Private information is more at risk during the counting of absentee ballots because addresses and names are on the outside envelope, Byrum said.

If that information is disclosed, “that would be horrible,” Byrum added.

Ottawa County Clerk Justin Roebuck, a Republican who is co-chair of the Michigan Association of County Clerks, told Bridge he agrees with the concept of the measure, but has some concerns.

“The spirit of the legislation is trying to get to the heart of the ability for the public or observers to really see what's happening in a situation where ballots are being tabulated in a counting board,” Roebuck said.

“We just need to have really high standards for ensuring that that video recording is not going to allow anyone to observe a ballot being connected to a voter’s name.”

The legislature is also considering a measure that would allow for select members of each political party to record election audits.

Roebuck said the Legislature should consider allowing the public as a whole to attend the audits, instead of just partisans.

“These should be events that are open to the public,” Roebuck said.

The proposals are part of a 39-bills package introduced by Republicans in Michigan, including measures to require IDs to vote, increase security of absentee ballot drop boxes and require a photocopy of driver licenses or photo ID when applying for an absentee ballot by mail.

Many of these bills are similar to those introduced in other states as part of a GOP effort to tighten election laws following Trump’s loss.

Another bill would expand the number of members in the board of canvassers in counties with a population of 200,000 or more.

The current law in Michigan establishes that each board of canvassers, regardless of population, have four members — two Republicans and two Democrats.

McBroom said the proposal is meant to expedite the duties of the canvassers, which include certifying primaries and elections, conducting recounts, inspecting ballot containers and resolving complaints of malfunctioning equipment and defective ballots.

Clerks and critics said the bill would disproportionately impact Democratic-leaning counties and make it easier for Republicans to block certification.

Nine counties statewide have populations of more than 200,000 — Wayne, Oakland, Macomb, Kent, Genesee, Washtenaw, Ingham, Ottawa and Kalamazoo. All but Macomb and Ottawa favored President Joe Biden, a Democrat, over Trump in 2020.

Mary Ellen Gurewitz, a Democrat who is vice chair of the Wayne County Board of Canvassers, told lawmakers adding more canvassers would cause deadlocks.

She said it could lead to more instances in which canvassers refuse to certify an election, similar to what happened in Wayne County in 2020, where Republicans initially voted against certifying the election results.

They later voted to certify and then unsuccessfully attempted to rescind their vote.

But McBroom, the senate sponsor, said it could also lead to the opposite.

“You’d have to influence three people, or four, instead of only two,” McBroom said. “So, I think the knife cuts both ways.”

He said he’s willing to tweak his proposal.

“I'm not driving a flag down on one position or the other,” McBroom said. “I'm comfortable with whatever makes everyone else feel that it's fair.”

The proposals have drawn considerable opposition from Democrats, and tensions increased during Wednesday’s hearing when Secretary of State Jocelyn Benson issued a news release blasting Republicans.

She said the 39-bill package is “part of a national, coordinated and partisan strategy to keep the ‘Big Lie’ alive and in the national consciousness through legislation that would undo the very policies that ensured the 2020 election results were accurate and the process secure.”

Benson lambasted as “appalling” a bill, SB299, that would require clerks to deliver results to the county by noon the day after the election. Critics say that would be a challenge in large counties that tend to vote Democratic.

Republicans have acknowledged they need to change the language.

McBroom said Benson is fanning the flames and continues to make critical statements that aren’t true.

“They're ignoring what they know is true, that SB299 has no chance of passing as is. That the sponsor, myself, others have all made that very clear,” McBroom told reporters after the meeting.

“I mean, they've been coming every week, they've been submitting testimony … providing inputs on what would work, what doesn't work,” McBroom said.

“I don't understand why suddenly we get a hit piece from the other direction, that completely ignores what was just testified to.”

After the hearing, a Benson spokesperson, Tracy Wimmer, issued a statement saying that Benson “has a responsibility to speak the truth” and “nearly every bill” in the package “would be destructive to democracy.”

“We are … glad to hear Senate Republicans will be working to address the egregiousness of this bill — even if it took public scrutiny to get them there,” the statement read. 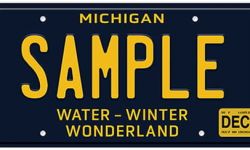