Less than 100 miles away on Saturday, nearly 2,000 conservative activists railed against party elites and listened to speeches at a farm in Antrim County, a breeding ground for 2020 election conspiracy theories.

The dueling events exemplified ongoing concerns for the GOP: whether party divisions and continued false claims of voter fraud in the 2020 election could hurt efforts to unseat Gov. Gretchen Whitmer and other Democrats next year.

“There are a lot of people who want to focus on the past, and mainly the 2020 election, and are allowing that to get in the way of our larger goal,” said Jamie Roe, a Republican strategist.

There was no shortage of love for former President Donald Trump or airing of election grievances at the Michigan Republican Leadership Conference on Mackinac Island.

Some attendees wore “Make America Great Again” hats, while panelists discussed “election integrity” and claims of mishandled ballots that have been repeatedly debunked. 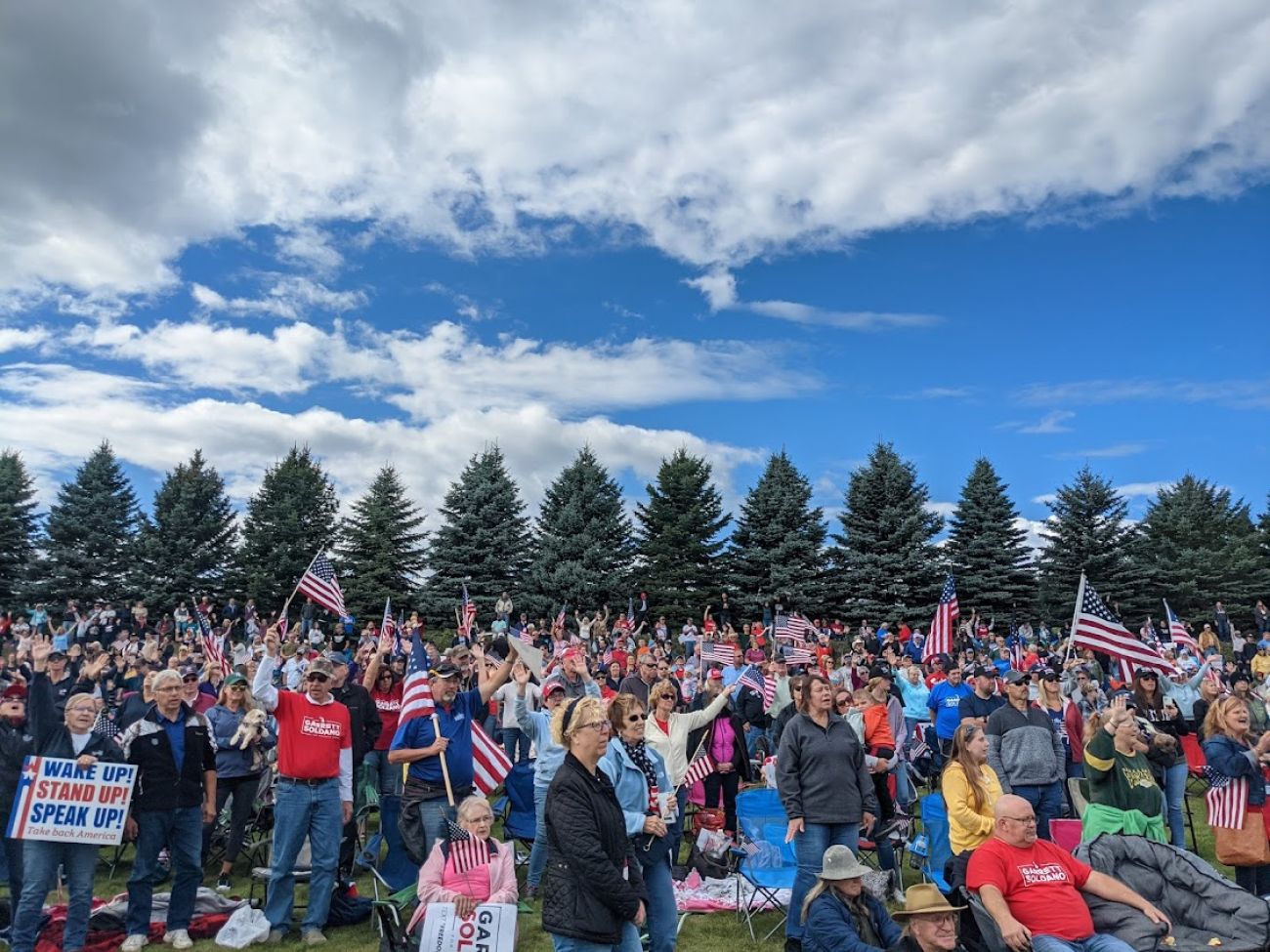 “The focus of the last election is always going to be important for voters — election integrity is very important to voters,” said Meshawn Maddock, an ardent Trump supporter and co-chair of the Michigan Republican Party.

Ronna McDaniel, the chair of the Republican National Committee, said it is important to “talk about the things that happened in 2020,” but that she was “also looking forward.”

But almost a year later, the 2020 election — and the controversy surrounding it — still haunt the few Republicans who have spoken up against Trump or his claims of fraud.

Two Republican members of the congressional delegation, U.S. Rep. Fred Upton of St. Joseph, and Rep. Peter Meijer of Grand Rapids, have both been censured by multiple county parties over their January vote to impeach Trump.

Upton was the only GOP representative not in attendance at the conference. A spokesperson said he had to attend a wedding.

Also missing the conference was state Sen. Ed McBroom, R-Vulcan, who received backlash for issuing a report that concluded there is no substantiated claim of fraud in the state, and former Vice President Mike Pence, who canceled a planned keynote speech, citing a scheduling conflict after GOP activists had protested his invitation.

The presumed GOP gubernatorial frontrunner, former Detroit Police Chief James Craig, made the rounds at the conference and won a straw poll of Republicans in attendance, with 58 percent.

But he generally avoided questions from reporters, preferring instead to speak to supporters and call for unity in the quest to “evict Gretchen Whitmer” as governor.

Also absent from the island gathering: Garrett Soldano, a gubernatorial candidate who organized the Antrim County event, as well as thousands of activists who claim the Republican conference is not a place for them.

Soldano, a Kalamazoo-based chiropractor and social media personality, used his event on Saturday to rail against so-called RINOs — Republicans in name only.

“We’re making a statement that this is our party,” Soldano said to raucous applause from about 2,000 people at Friske’s Farm Market in Ellsworth. “This is our state. This is our country.” 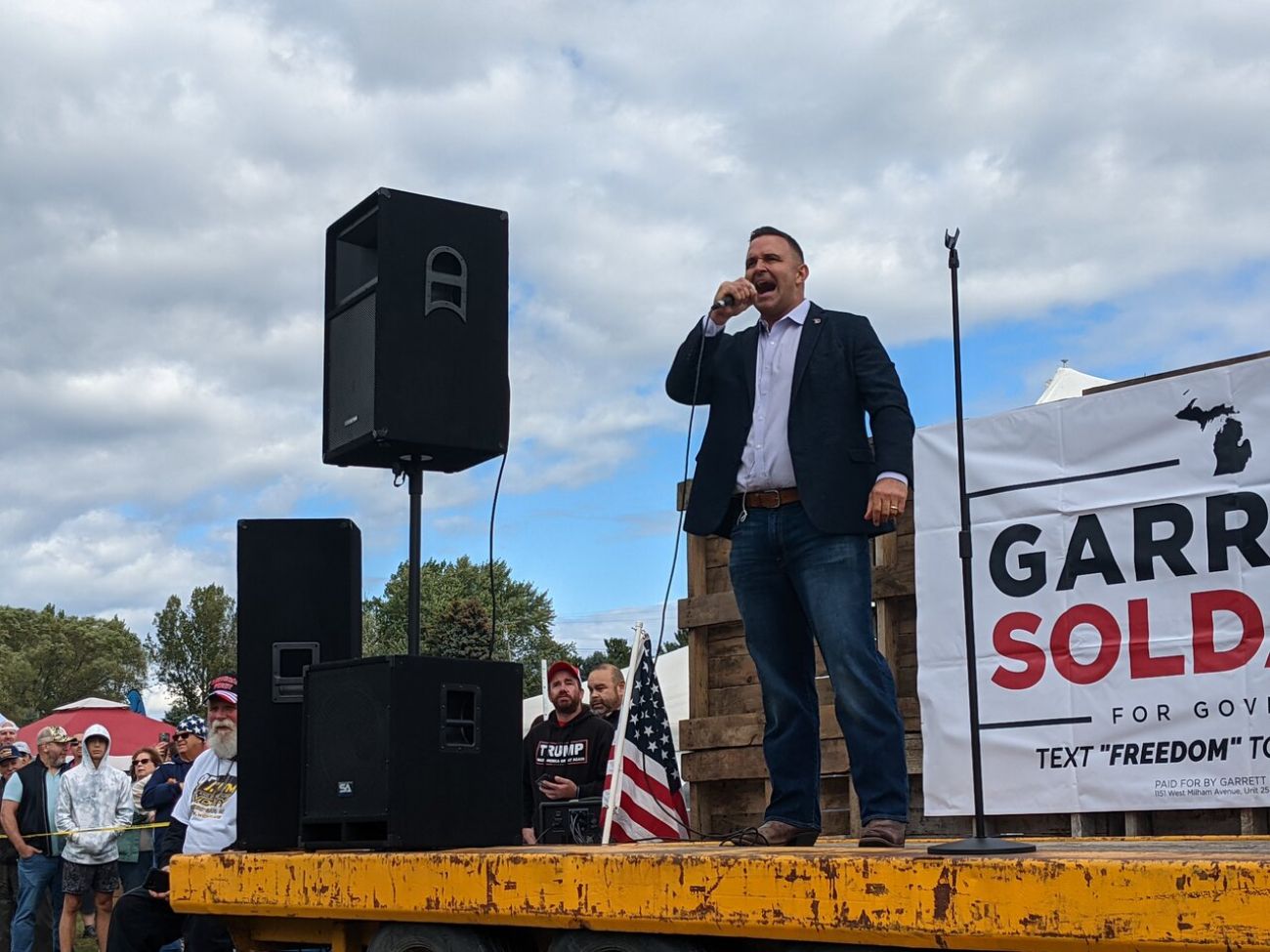 Garrett Soldano, a Kalamazoo area Republican running for Michigan governor, speaks to supporters at a rally in Ellsworth on Saturday. (Bridge Michigan photo by Jonathan Oosting)

Soldano accused the Michigan GOP of trying to boost Craig in the Republican primary despite a pledge to remain neutral.

A critic of Whitmer’s lockdown order and other COVID-19 restrictions, Soldano led all GOP gubernatorial candidates in fundraising through July — before Craig officially entered the race.

Wearing cowboy boots and a blazer as he spoke from a flatbed trailer, Soldano accused the GOP “establishment” of retaliating against him for skipping the Mackinac conference by releasing “embarrassing” information about his 2009 drunk driving arrest.

Antrim County, a conservative region twice carried by Trump, has figured prominently in conspiracy theories about the 2020 election because a human error by the GOP clerk briefly skewed results in Democratic President Joe Biden’s favor.

While Soldano told Bridge Michigan he has not personally “seen the evidence” of election fraud, his fans cheered as he called for a “full forensic audit” of the 2020 contest.

“The only way that we win (in 2022) is to beat governor Whitmer so bad that even if they cheat we still win,” he said.

A closely watched Arizona election audit ordered by Senate Republicans in that state cost nearly $6 million and reinforced Biden’s win there. In Michigan, a Republican-led Senate GOP panel spent months investigating the 2020 election and concluded there was no evidence of widespread or systematic fraud.

Still, speakers at the Antrim County rally continued to suggest Biden’s election victory could be overturned — and lashed out at Michigan legislative Republicans for failing to “decertify” the contest.

“If you don’t do a forensic audit in this state, we’re not going to vote for you,” said Randy Bishop, a conservative radio host and fixture of northern Michigan politics.

Bishop told Bridge Michigan he typically attends the Mackinac GOP conference but skipped this year’s event to endorse Soldano and rally with activists.

“These are the people who are going to absolutely knock on doors, put up signs, donate $20,” he said. “They don’t have (Michigan GOP Chair) Ron Weiser’s millions, but they’re real.”

Jon Smith, secretary of the Hillsdale County GOP, said he traveled to Mackinac Island on Friday to try and meet U.S. Rep. Matt Gaetz, R-Florida, but did not attend the party’s conference.

On Saturday, he took to the stage in Antrim County wearing a “RINO Hunters” bullseye  T-shirt that promised to “take back the GOP.” 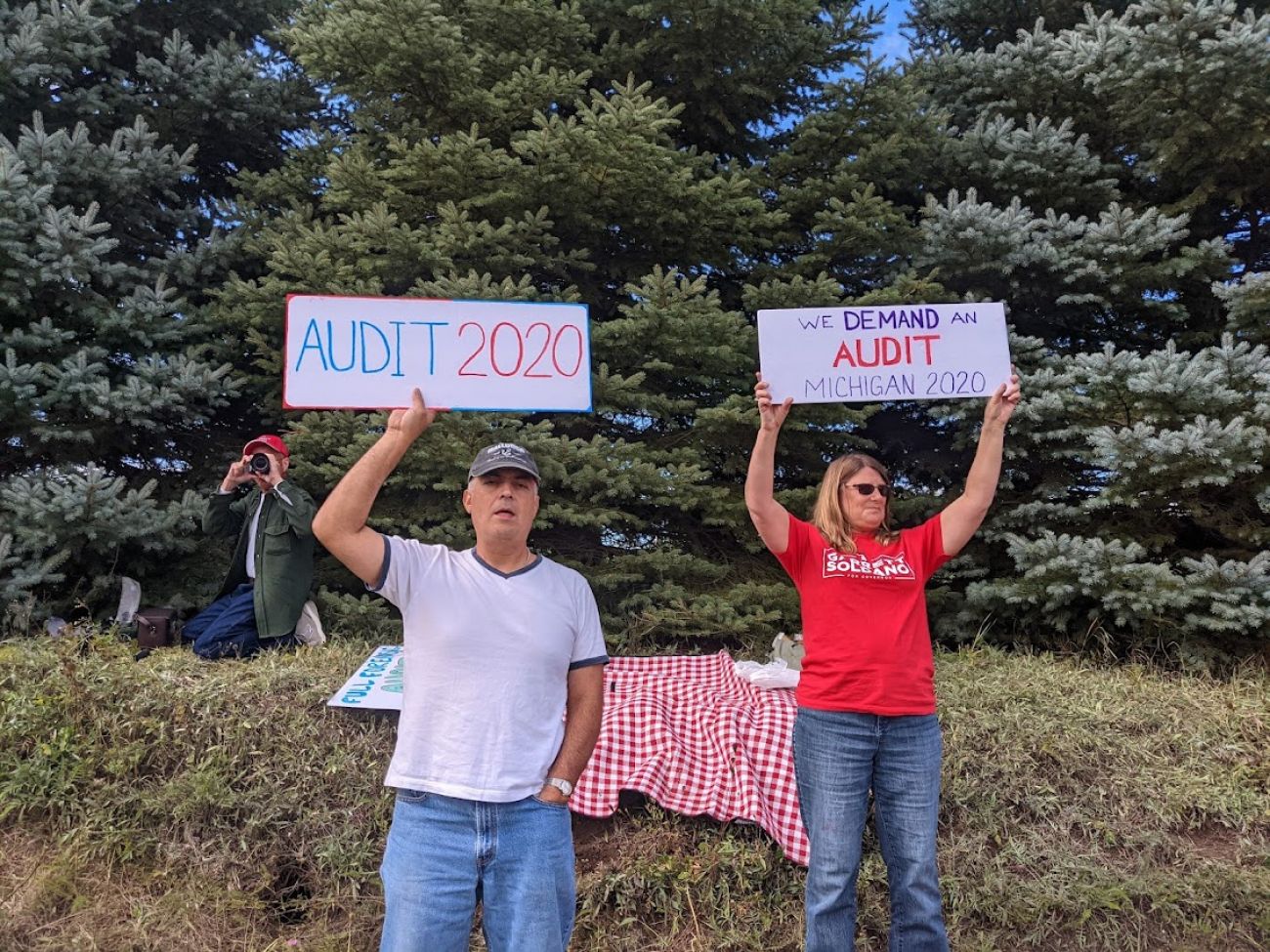 Attendees of a rally in Antrim County on Saturday demanded an audit of Michigan's 2020 election. Numerous investigations have confirmed President Joe Biden's victory here and found no evidence of fraud. (Bridge photo by Jonathan Oosting)

“In my personal opinion, James Craig is a Democrat posing as a Republican,” he said of the former police chief who was recruited by Weiser and other top party officials. “I’ve seen the GOP support (former President) George W. Bush too. I’ve seen them support lies after lies after lies.”

Maddock, a former anti-establishment activist who is now co-chair of the Michigan Republican Party, told Bridge Michigan she was “disappointed” that some candidates skipped the event.

“I feel like it's just because they don't really understand that this conference is a grassroots conference,” Maddock said.

Roe, the GOP strategist, said attending the conference is almost needed to win the nomination.

“The people who are here for the most part, are the most committed activists in the state,” Roe said.

Republican leaders say they need to stop fighting among themselves if they want to beat the Democrats in 2022.

Former U.S. Secretary of Education under the Trump administration, Betsy DeVos, had some words for conference goers: the party is more than just one person.

“I worry that principles have been overtaken by personalities,” the Michigan native told the audience, stopping short of naming Trump. “Ours is not a movement dependent on any person.”

DeVos resigned after the Jan. 6 insurrection in the U.S. Capitol. She then said Trump’s rhetoric had an impact on the day’s event.

But Trump is still powerful, and many Republican candidates are vying for the endorsement of the former president.

Trump has endorsed attorney Matt DePerno for attorney general and Kristina Karamo for secretary of state. Both candidates have spread lies about the 2020 election.

DePerno polled third in a weekend straw poll. Tom Leonard, a former speaker of the House, took first place with 48 percent of the vote.

Trump has yet to endorse a candidate in the gubernatorial primary.

Craig has polled well in hypothetical general election matchups against Whitmer but has not yet secured the blessing of the former president. The Detroit News reported he is planning on visiting Trump in the next few days.

Tudor Dixon, a conservative media personality and a GOP gubernatorial candidate, told Bridge Michigan a Trump endorsement could be a game changer in the race.