Highways win, local streets left ‘in the dust’ by Whitmer’s $3.5B roads plan

LANSING — Gov. Gretchen Whitmer is scaling back her plan to “fix the damn roads,” unveiling a $3.5 billion bond proposal that would help rebuild Michigan highways without a tax increase but saddle the state with decades of new debt.

The first-term Democrat announced her latest plan Wednesday night in her second State of the State Address, promising to bypass the Republican-led Legislature that last year balked at her proposal to raise money by increasing gas taxes by 45 cents per gallon.

“It’s time for Plan B: executive action,” Whitmer said in an address before a joint session of the state House and Senate at the Michigan Capitol.

Her initial plan would have given Michigan the highest fuel taxes in the nation and raised $2.5 billion each year. Her new plan includes a total of $3.5 billion in spending over five years.

It’s “financed without an increase at the gas pump, and it will do three things: save time, save money, and save lives,” Whitmer said. “So, from now on, when you see orange barrels on a state road, slow down, and know that it’s this administration fixing the damn roads.”

The roads proposal was the most anticipated element of the governor's annual speech before the Legislature, but it will not require legislative approval. Instead, Whitmer will seek bonding authority from the State Transportation Commission, a six-member board expected to consider her request at a Thursday morning meeting in Lansing.

“What she’s focused on is a financing tool,” said House Speaker Lee Chatfield, R-Levering, told reporters after the speech. “If done right, [bonding] can be responsible, but this is not a funding proposal. This is not a long-term solution for roads.”

Here’s what it means to motorists:

Better highways, but not local roads

Commuters, truck drivers and other motorists who drive highways would likely see the largest benefit from Whitmer’s plan. That’s because proceeds from State Trunkline Fund bonds the governor is pursuing can only be spent to build or rebuild interstates, U.S. highways and smaller Michigan highways like M-1 in Detroit, otherwise known as Woodward Avenue.

Unlike Whitmer’s earlier gas tax plan, which would have divided new money between state and local road agencies, the bonding proposal will provide no new money to fix neighborhood streets and other local roads that motorists hit the moment they leave their driveway.

Whitmer’s latest plan would raise $3.5 billion over three years, less than half of the $7.5 billion that would have been generated over the same period with her gas tax. But state transportation bonding is one of the governor’s only tools to boost road spending without legislative or voter approval.

The plan leaves local roads “in the dust,” according to officials from the County Roads Association.

“While we all have had bumpy drives on the freeway, and those certainly need repair, every Michigan resident’s daily travels begin and end in their driveway,” said deputy director Ed Noyola.

But the new highway spending will make a meaningful difference for Michigan drivers, said Lance Binoniemi of the Michigan Infrastructure and Transportation Association, a road builders industry group that has routinely pushed for more state spending.

Whitmer acknowledged her plan would only boost funding for state-owned trunklines but urged the Legislature to develop a long-term solution that would also increase funding for local roads across Michigan.

“Next time you’re driving down your local street and hit a pothole or see a bridge closed — call up the leadership in this building and encourage them to act.” Gov. Gretchen Whitmer

What roads would be fixed?

The Whitmer administration did not immediately identify construction targets but said bond revenues will “add and expand 122 major new projects and nearly double the amount available to fix state roads and freeways” over the next five years.

“No politics. No tax increase. Just action,” the administration said in a policy memo.

A detailed spending plan is expected Thursday at the State Transportation Commission meeting.

MDOT's current five-year plan includes continued work on major modernization efforts on I-75 in Oakland County and I-94 in Detroit, along with projects on I-94 in Jackson, I-196 and I-96 in West Michigan, an I-496 interchange in Lansing, US-131 in Berrien County and the delayed replacement of the Lafayette Bascule Bridge in Bay City.

Highways tend to be in better shape than other Michigan roads, but they are also usually the most expensive to repair or replace.

As of 2018, 27 percent of Michigan-owned roads (known as trunklines) were rated in poor condition, compared to 41 percent of all federal aid paved roads in the state and 53 percent of non-federal aid local roads, according to the Transportation Asset Management Council.

The number of poorly rated state trunkline miles has nearly doubled since 2010, climbing from 3,925 miles to 7,960 miles in 2018, the latest year for which ratings are available.

No new taxes, but new debt

The fuel tax proposal Whitmer unveiled last year would have raised Michigan fuel taxes by 45 cents per gallon to 71.3 cents. While the governor maintains that a direct “user fee” was the best way to fix crumbling roads, she switched gears because even fellow Democrats wouldn’t sign onto the plan.

The governor’s new bond plan would not raise fuel taxes or registration fees on Michigan motorists, but it would require the state to spend as much as $300 million a year repaying the new debt. While motorists may see better highways in future years, the state will have less to spend on road repairs in future decades unless officials pursue another tax increase.

While Republicans have already sounded alarms over the prospect of taking on new debt, which the state would have to repay with interest, they may be unable to stop Whitmer.

The Michigan Constitution allows the state to borrow for road funding by pledging to repay bond debt with future transportation tax revenue. A 1951 law delegates that authority to the State Transportation Commission, which includes one Whitmer appointee and five members who were selected by Republican former Gov. Rick Snyder.

Advocates say bonding will allow the state to complete major road projects that would likely cost more down the line because of inflation. In the meantime, drivers can benefit from improved roads up front while the state pays for the projects over time.

But critics note that interest payments will drive up the total price for road construction projects and saddle future generations with debt.

Michigan still owes more than $1 billion on road construction bonds, most of which were issued more than a decade ago, and is not slated to pay off the full debt until 2037. 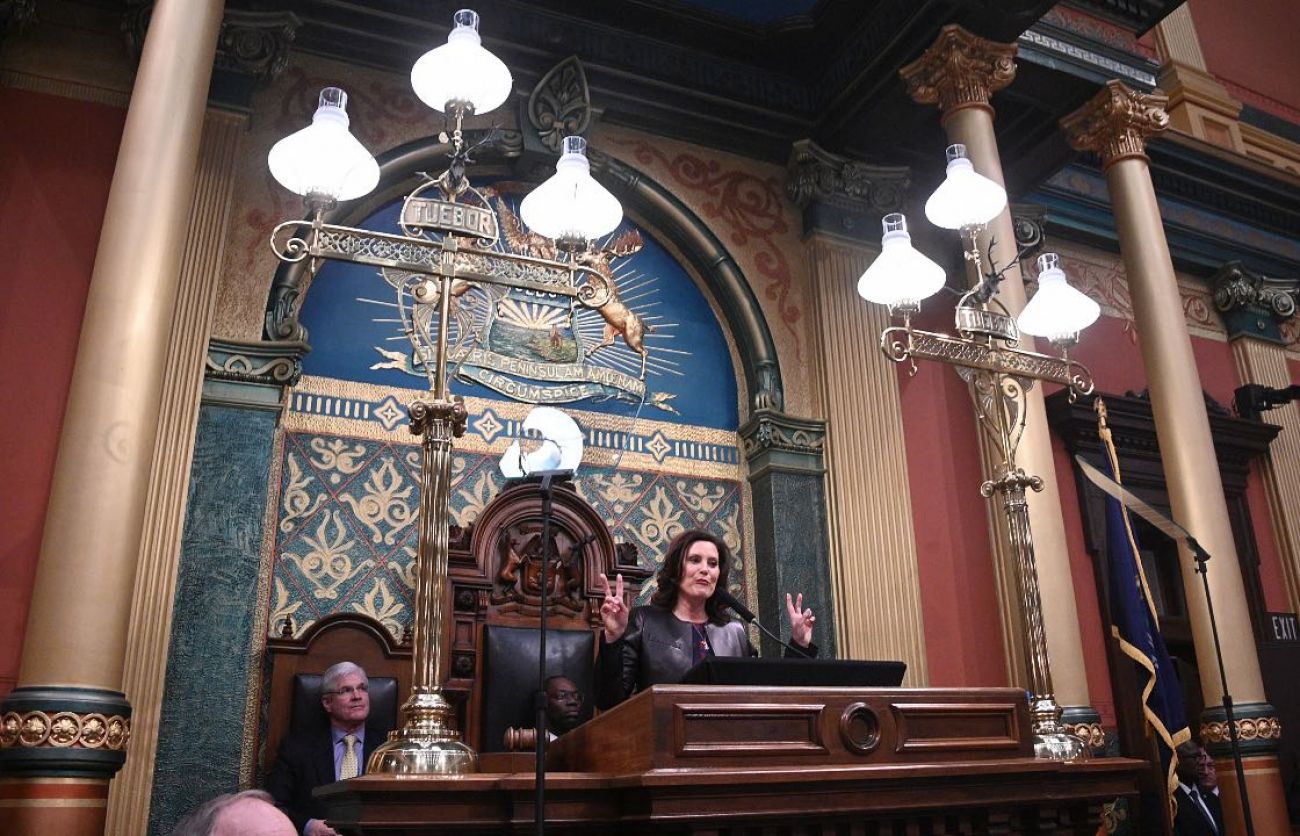 “Borrowing means you pay it back with interest, and that means either future tax increases or future cuts to other services –  there’s no two ways around it,” said Patrick Anderson, founder of the conservative Anderson Economic Group in East Lansing.

“Borrowing without a vote of the people is the same thing as digging deeper into credit card debt,” he said. “It just means that three months from now you won’t have money to pay for your clothing and groceries because you blew it on splurges this month.”

Whitmer appears to have plenty of legal room to issue bonds yet remain under an annual debt service cap, which is currently about $300 million.

The state currently has about $464 million in outstanding bonds pledged against state transportation revenues, according to the non-partisan House Fiscal Agency. Repayment will cost the state $118 million this year but just $20 million by 2024 and $6.4 million by 2028.

Whitmer's plan is the latest front in a decades-long battle over financing repairs to the state’s aging infrastructure system. Governors before her have utilized both bonding and taxing.

Snyder, an accountant who warned against borrowing, in 2015 coaxed the Legislature to raise gas taxes by 7.3 cents, vehicle registration fees by roughly 20 percent and divert general fund revenue to roads.

Former Gov. John Engler, a Republican, issued bonds to borrow more than $1 billion for road fixes under his Build Michigan program, a long-running effort he launched in 1992 that also included a 4-cent gas tax hike in 1997 and more bonding in 2000.

"Build Michigan is a plan to create thousands of jobs and build the necessary infrastructure for Michigan's future," Engler said in 1992. "Some have said it's easy to raise the gas tax, but with so many Michigan families already struggling to make ends meet – now is not the time."