Michigan roads are a big mess. Here are eight big ideas to fix them.

Michigan Government
Michigan roads are a big mess. Here are eight big ideas to fix them.

Most agree Michigan’s atrocious roads need fixing. And most realize the price tag is in the billions of dollars.

The big question: How do you raise that kind of money?

Just days ahead of the March 5 roll-out of her first budget, Democratic Gov. Gretchen Whitmer isn’t revealing her plans, teasing a Detroit Regional Chamber crowd on Thursday that everyone wants to know how she’ll “fix the damn roads.”

“I think it’s a good time for a lot of things,” said state Rep. Jason Sheppard, R-Temperance. “I don’t think anything’s off the table.”

Sheppard said he prefers a 1 penny increase in the sales tax, from 6 to 7 cents, with the additional amount dedicated to roads

His proposal is likely to be one of many, less than four years after approval of a 2015 roads deal that raised fuel taxes and registration fees to add $1.2 billion annually.

But most experts now concede that money wasn’t enough and even more is needed to erase years of disinvestment in the state’s infrastructure.

“There’s no way we’re going to fix this problem that’s been 50 years in the making without coming up with new revenue for infrastructure,” Senate Majority Leader Mike Shirkey, R-Clarklake, said following Whitmer’s State of the State address in February.

Roads are such a top issue, there’s “growing support for doing something big, something that makes a true impact on our economy,” said John Sellek, a GOP strategist and former spokesman to Bill Schuette, the Republican former attorney general whom Whitmer defeated for governor in November.

“The citizens of Michigan are not going to let us do nothing again,” agreed Sheppard.

Here are some proposals, how they might work and likely obstacles.

Related: Is 2019 the year Michigan joins the rest of America on public records?

Sheppard proposes raising the sales tax by one penny to 7 cents per $1 and dedicating the increase entirely to roads and infrastructure. Based on current taxes, that could raise $1.3 billion to $1.5 billion a year.

Advantages: It would not require a lot of other changes, but would need to be approved by a vote of the people. The tax would create a more stable source of revenue since the increase in fuel efficiency and move to electric cars has lowered fuel sales (and taxes) without reducing wear and tear on roads.

Disadvantages: It’s a tax increase, and many Republicans have taken a vow never to raise taxes. Democrats also may oppose increasing the sales tax because it’s considered regressive, meaning it disproportionately affects lower-income residents. And judging from recent history, residents aren’t keen on it either. In 2015, voters by a 4-to-1 margin rejected Proposal 1, which would have raised the sales tax to 7 percent for roads, schools and transit.

Solution: Bump up the fuel tax

A group of former lawmakers has proposed a 10-year, 47 cent increase in fuel taxes –  roughly 5 cents a year for a decade – that would generate $2.6 billion a year when fully implemented.

Impact: For a family with two cars that drive 30,000 miles a year combined, at 30 miles per gallon, the tax would cost an additional $470 a year when fully implemented.

Advantages: The tax increase would keep all fuel tax money in roads and would address the estimated $2.6 billion in additional funding needed to fix and maintain roads, as identified by former Gov. Rick Snyder’s infrastructure commission.

Disadvantages: It would nearly triple Michigan’s fuel tax and make it much higher than neighboring states. And as fuel efficiency increases, tax revenues would dip. Sheppard, whose district is near Ohio, said a higher fuel tax would send even more people across the border to get gas, even though Ohio’s new Republican Gov. Mike DeWine has recently called for an 18-cent increase in that state’s gas tax.

[Disclosure: The Michigan gas tax increase proposal came from a group known as the Michigan Consensus Policy Project, which includes The Center for Michigan, the nonprofit, nonpartisan organization that publishes Bridge Magazine. Phil Power, the center’s founder and chair, serves in an advisory capacity on the project. Bridge’s editorial staff has no role in the proposal, and the Policy Project had no role in writing this article.]

Opinion: Everyone – not just drivers – should pay for Michigan roads

Solution: Diverting all sales tax on gas to roads

Michigan is one of only a handful of states that levy a sales tax on gas. That’s atop the state’s 26.3 cent a gallon gas tax, meaning that when gas is $2.12 a gallon, that includes a 10.5 cent in sales taxes.

But none of that money, an estimated $1 billion, goes toward roads. Instead it’s placed into the state’s budget and 75 percent of that goes to the school aid fund.

A recent study suggested removing the sales tax and replacing it with a gas tax of the same amount. It’s a proposal backed by House Speaker Lee Chatfield, R-Levering.

Impact: Minimal –  and that’s one of the benefits. Motorists wouldn’t notice a net change at the pump, paying the same amount for gas while enjoying a $1.5 billion bump in road repair money.

Advantages: Politically palpable. Would keep the overall price of gas lower as it creeps toward $3 or $4 a gallon.

Disadvantages: Removing the sales tax creates a billion-dollar hole in the state budget, much of it in K-12 education. It would force huge cuts or a separate tax increase to make up the difference.

Looking beyond roads for a solution

Many of the leading proposals to fix the roads are piecemeal solutions, which would only address one problem in a state with many needs. So some in Lansing are pressing for a bigger solution.

“Everyone has to be prepared to swallow something unpalatable,” said Adrian Hemond, CEO of Grassroots Midwest, a political consulting firm in Lansing.

And Hemond said that may mean getting painfully creative: “The best way to solve the problem is to make it bigger.”

Hemond and others believe big changes could open the door to changing how Michigan funds education, which was radically altered after voters approved Proposal A in 1994. Property taxes plummeted as the state instituted a flat, 18-mill tax on homes (24 on businesses) and increased the sales tax from 4 to 6 percent.

It’s been a largely popular reform but hamstrung local governments and other taxing units. Changing Proposal A has been a non-starter in Lansing, but Shirkey said last week he’s open to at least looking at changes.

“We should review it,” Shirkey said. “That doesn’t mean we should change it.”

Changing Proposal A could address stagnant school funding. A recent study shows Michigan is 48th in per pupil spending growth since 1995; in the last 15 years, student test scores have fallen well below other states.

“We do have a revenue problem when it comes to schools,” said Don Wotruba, executive director of the Michigan Association of School Boards.

No legislation is pending on Proposal A. Here are a couple options, all of which would require not only approval from the Legislature but also a vote of the people:

Impact: Raising the current 6-mill statewide education property tax by 1 mill would raise $325 million, according to Snyder’s infrastructure commission. That would cost the owner of a home valued at $100,000 an extra $50 a year –  or $150 if it was raised 3 mills.

Advantages: A property tax increase would shift even more of the burden on owners of valuable property.

Disadvantages: Michigan voters were angry in 1994 with rising property tax rates and boosting the statewide millage might spark further anger.

School districts are now limited to asking voters to fund mostly capital projects, like repairing or building schools and facilities. One change could allow them to ask local voters for more money for operations –  like paying teachers and pensions.

Impact: Doing so would give local school districts more control over funding. Depending on millages approved, it would raise taxes on residents. Every added mill would add $50 to the annual bill of the owner of a home valued at $100,000.

Advantages: Could ease budget shortfalls in some districts.

Disadvantages: Could lead to inequitable funding among school districts, which is one reason lawmakers approved Proposal A a generation ago.

No Republican is talking about this one, but some Democrats want to change the state’s 4.25 percent flat income tax and replace it with a series of graduated rates, with wealthier residents paying higher rates.

“I’ve been trying to start this conversation for a while,” said state Sen. Jeff Irwin, D-Ann Arbor.

Irwin and state Rep. Robert Wittenberg, D-Pleasant Ridge said a graduated income tax could raise a billion or more dollars a year while lowering taxes to a majority of residents.

“I think people universally recognize when things are unfair and they’d like to see something like this implemented,” Wittenberg said.

Advantages: People seem to like the idea of having the wealthy pay more: national polls following U.S. Rep. Alexandria Ocasio-Cortez’s call for a 70 percent rate on incomes over $10 million have shown support for the idea. Even a poll done by Fox News, a conservative outlet, found similar support including among Republicans.

Disadvantages: Higher income taxes could scare away the highest earners, including the business owners the state desperately wants to keep and attract. And Michigan voters haven’t been keen on it –  they soundly rejected graduated income tax proposals in 1968, 1972 and 1976.

Ballard said the yawning gap is apparent to the vast middle and the idea of imposing higher rates on the wealthiest residents “would resonate in ways maybe it didn’t 50 years ago.”

But getting it on the ballot? “Everybody understands it’s an idea going nowhere,” said Hemond, a Democratic consultant.

Other big ideas also face hurdles, like expanding the sales tax base by including many more services. That was tried during the administration of former Gov. Jennifer Granholm's administration, when legislators approved –  and almost immediately repealed –  a 2007 sales tax on services.

Impact: The cost for haircuts, sporting events, legal advice would be subject to the sales tax from which they are currently exempt. Granholm recommended a $1.3 billion expansion in 2010. It was not approved.

Advantages: With the state’s spending habits moving more from products to services, the expansion would capture more commerce and perhaps allow the overall sales tax to be lowered.

Disadvantages: People would pay more and businesses could get squeezed. The only winner might be lobbyists –  an army of special interests would descend on Lansing to try to exempt different services. This is less likely than graduated income tax. 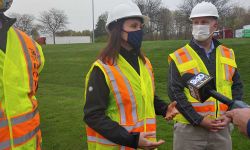 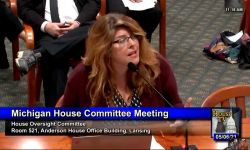 May 6, 2021 | Jonathan Oosting in
Michigan Government