Michigan Government
James Craig to run as write-in for Michigan governor: ‘Everything is possible.’

LANSING — Former Detroit Police Chief James Craig’s name won’t be on the Republican primary ballot — but he says his campaign for governor isn’t over.

Craig, who lost his court fight to stay on the ballot after state officials disqualified him over claims of fraudulent petition signatures, announced he’d filed paperwork to run as a write-in candidate Tuesday outside of the state Bureau of Elections office in Lansing.

Speaking to reporters Tuesday, Craig acknowledged the effort is an “an uphill battle,” but said he doesn’t intend to give up. The primary is Aug. 2.

“I guess the appeal to the voters is, everything is possible,” he said. “I wouldn’t do it if I didn’t think it was possible…we’ll see what happens.”

Craig led some polls for the GOP contest before an unprecedented fraud scandal rocked the race, halving the 10-candidate field and knocking out some of the most well-recognized names in the running to take on first-term Democratic Gov. Gretchen Whitmer.

The Michigan Supreme Court rejected lawsuits from four candidates who challenged the state’s findings that they didn’t have enough valid signatures. A federal court on Monday dismissed a request from Perry Johnson, a businessman who poured millions into his campaign, to delay ballot printing while challenges continue.

The primary winner takes Whitmer in the Nov. 8 general election.

Besides Craig, there are no other declared Republican write-in candidates, who must file a declaration of intent with the state for their votes to be tallied. Craig said he plans to seek clarification on whether write-in votes with minor misspellings or other variations — such as including “Chief” in the write in — would count.

Dixon has picked up endorsements from the DeVos family and Right to Life of Michigan, and Kelley was arrested last week on federal misdemeanor charges related to the riots in the U.S. Capitol on Jan. 6, 2021.

Craig, Johnson and other candidates denied ballot access have described themselves as victims of unscrupulous signature gatherers.

Craig told reporters Tuesday that he’s strategizing how to appeal to voters and donors and instruct them on how to properly fill out his name. He didn’t rule out the possibility of television and radio ads, but acknowledged the difficulties of raising the kind of money.

“I'm optimistic, but I can't tell you with a whole lot of certainty,” he said. “Again, things have changed dramatically. This is not the path I would have chosen.”

Detroit Mayor Mike Duggan waged a successful write-in campaign in 2013, but that was in a citywide election with about 130,000 votes. Nearly 1 million voters cast ballots in the last Republican gubernatorial primary in 2018.

To make the ballot, gubernatorial candidates were required to collect at least 15,000 valid voter signatures.

The Michigan Bureau of Elections referred its fraudulent circulator findings to Attorney General Dana Nessel. Nessel previously told Bridge Michigan she believes “there has to be a level of accountability” for the signature forgery scandal and said her office will investigate.

Under one state law, circulators could face up to five years in prison and a fine of up to $1,000 for each petition they filed. 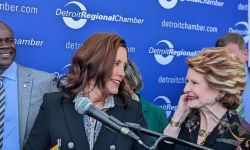 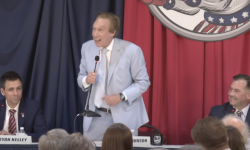