Is Lansing trying to steer funds reserved for recreation land?

A Michigan legislator is trying to fund more recreational development on public land across the state, and environmentalists are up in arms about it.

If that sounds counterintuitive, it’s understandable.

But funding those extra projects ‒ from trail expansion in the Upper Peninsula city of Manistique to an ice rink in Gibraltar ‒ is unprecedented and potentially unconstitutional, warns the Department of Natural Resources, because the Legislature would be taking decision-making authority away from the Michigan Natural Resources Trust Fund.

The controversial effort, led by Sen. Darwin Booher, R-Evart, would for the first time overrule the trust fund board’s recommendations for purchases and development of public land. The DNR complains that Booher is attempting to pull money from the trust to pay for development projects the nonpartisan board chose not to fund.

The Legislature has toyed with raiding the Natural Resources Trust Fund twice in recent years - in 2013 to pay for lake dredging and in 2014 to fund road repairs. Both times, the efforts were shot down, with Michigan Attorney General Bill Schuette in 2013 saying the effort was unconstitutional. Those recent battles may explain why environmental groups are protesting a move that, in the short term, would actually provide more funding for recreation. 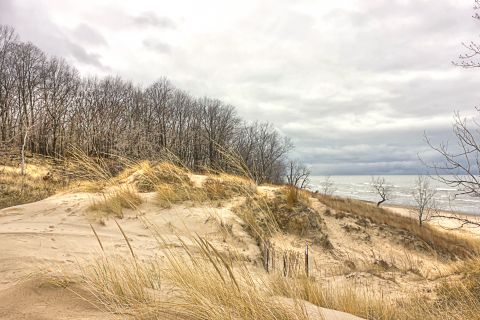 “End-running around the (trust fund) board is probably not best for the long-term stability of the board down the line,” said Charlotte Jameson, government affairs director for the Michigan League for Conservation Voters. “It sets a precedent. What happens next year?”

Booher sees it differently. “You need to do these projects if you have the money,” Booher told Bridge Magazine. “It’s the Legislature’s responsibility.”

At stake is who controls the purse strings for Michigan’s trust fund, which for decades has been instrumental in the purchase and development of some of the state’s prized recreation sites.

The trust was established in 1976 as a way to use royalties paid by companies for oil and mineral rights on state land for public land purchases and recreational development. Since 1983, the Legislature has been barred from raiding the trust fund by an amendment to the state constitution approved by voters. The trust is allowed by law to collect up to $500 million in royalties, a cap it reached in 2011. Since then, oil and gas royalties have gone instead to a separate public interest trust, the State Park Endowment Fund, which helps fund park operations.

Since its establishment, the natural resources trust has allocated more than $1 billion to protect and expand Michigan public lands, with grant allocation determined by the Michigan Natural Resources Trust Fund Board. 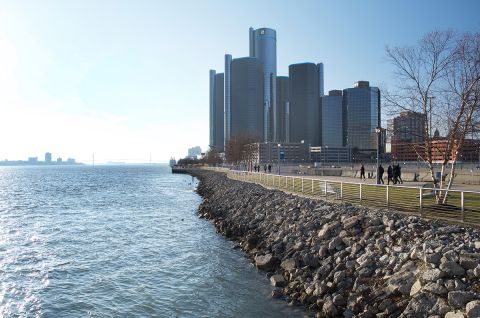 Projects funded through the trust fund include investment in the Detroit riverfront, purchase of the scenic outlook in the Upper Peninsula known as Brockway Mountain, and purchase of lakefront acreage at Saugatuck Dunes.

Here’s how it worked for decades: Municipalities around the state submit applications for grants to purchase land for public use or develop public land for recreational purposes The staff of the Department of Natural Resources score those applications based on a set of criteria. Those scored applications are passed along to the five-member board, which generally recommends projects that score the highest.

Here’s this year’s list of project applications along with their scores.

The board passes along those recommendations to the Legislature, which approves them. Though funding for the projects comes from the trust fund with no money coming from state coffers, the Legislature still must formally appropriate the money.

Last week, Booher changed that routine. He took a Senate bill that approved funding for $87.7 million in projects recommended by the trust fund board and tacked on another $7.7 million from the fund’s reserves to pay for 43 other projects the trust fund had considered but rejected.

Booher’s actions were “unprecedented,” said Steve DeBrabander, manager of the grants management section of the Department of Natural Resources. “I don’t think this has ever happened before – adding projects (to the trust fund board’s recommendations).”

Brad Garmon, director of conservation and emerging issues at the Michigan Environmental Council, the nonprofit advocacy arm of about 70 environmental groups, admits the amendment puts environmental groups in the odd position of complaining about too much funding for too many recreational projects.

But Garmon and others worry about the setting a dangerous precedent that allows a partisan Legislature to determine recreational project priorities rather than a board that, while appointed by the governor, has guarded its independence.

“We have a 40-year history of this board being above the fray and making decisions that were legitimate and being free of political wrangling, all things you might lose if you have the legislature involved,” Garmon said.

Booher’s actions may not be constitutional. In 1983, Michigan voters passed a ballot measure which guaranteed constitutional protection for the trust fund to prevent legislators from raiding the fund balance. While environmentalists view Booher’s action as taking money from the fund, Booher disagrees, arguing that he’s merely appropriating funds for additional recreation projects.

“It’s quite ironic that people who want to talk about the sanctity of the U.S. Constitution want to turn a blind eye to the words of the Michigan Constitution,” said Bill Rustem, a fund board member and the former director of strategy for Gov. Rick Snyder.

“The people have spoken on how these dollars should be spent – and that’s to be determined by the Natural Resources Trust Fund board, not the legislature,” Rustem said. “The board is trying to preserve the buying power of the trust fund over time, and some legislators don’t like that… It’s a separation of powers question.”

According to DeBrabander, the trust fund had about $600 million in the bank ($500 million in royalty money plus investment earnings) leading into this round of grants. Because no new money from oil and mineral leases is coming into the trust, its only revenue is from earnings on investments. Thinking about long-term viability of the fund, the board made a decision to not spend all of the investment earnings for the year, DeBrabander said.

“The trust fund board could have chosen to fund every project they received, but they chose to strike a balance,” DeBrabander said.

That’s not the balance Booher would like to strike. The senator, whose district in Northern Michigan ranges almost from Lake Michigan almost to Lake Huron, said he believes the trust should fund more projects from its earnings. Even funding all of the additional projects, the fund balance would still be $300,000 higher than at the end of grant making last year, Booher said.

“You may not be able to do it every year, but this year you can,” Booher said. “Those 43 (additional) projects, almost every legislator has a project on the list.”

That’s the problem, Jameson of the League for Conservation Voters said. “There’s a reason we set up a board to administer the decisions around grant funding, to take it out of the hands of the Legislature,” Jameson said. “There’s an underlying conflict of interest (for legislators) that you’ll want to fund projects in your district.”

Jameson and Garmon of the Michigan Environmental Council both said they don’t believe Booher is attempting to undermine the trust fund board. But they said they worry about the next legislative intervention, and the one after that.

“The idea of funding all these projects is not bad, but if it gets to be a regular (event)  it could undermine funding in the future,” Jameson said.