Democratic presidential hopeful Joe Biden, who shared a socially distanced debate stage with Trump on Tuesday, delayed a planned trip to Michigan while he awaited his own test results, which came back negative. He eventually spoke in Grand Rapids on Friday afternoon, offering prayers for the president and reiterating his call for "mask mandates nationwide."

But it was mostly status quo at the Michigan Capitol, where GOP legislative leaders indicated they will not require lawmakers to wear masks despite positive COVID-19 tests from Trump and state Rep. Beau LaFave, R-Iron Mountain, earlier this week.

Conservative activists who rallied on the Capitol lawn largely ignored mask and social distancing guidelines as they lambasted Whitmer, who has feuded with Trump over the state and federal responses to a pandemic that has killed 6,781 people in Michigan and roughly 208,000 nationwide.

Lauri Mason, who recently moved to Grand Rapids from the Upper Peninsula, told Bridge Michigan she does not "believe" in masks and said she won't take extra precautions because of Trump’s diagnosis.

"It's something that's real and goes around, but I know that he's doing the hydroxychloroquine," she said of the president, referencing the largely unproven anti-Malarial drug the president said he was taking in May in an attempt to prevent COVID. 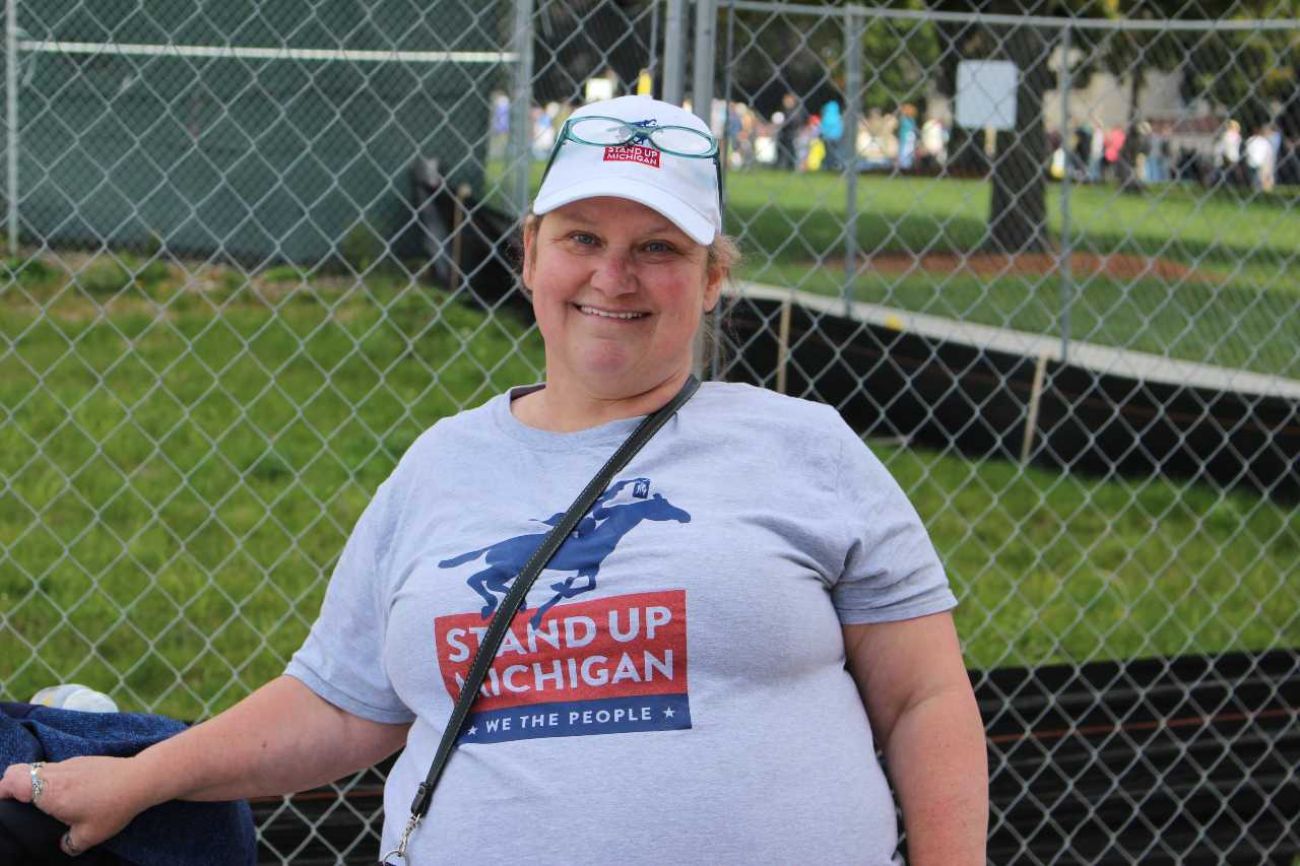 Mason cited mixed messaging on face coverings early in the pandemic, when health officials discouraged the public from using N-95 masks amid shortages for frontline workers, and said she does not trust the subsequent scientific consensus that they help slow the spread.

"If somebody's really scared of me, I will put it on," Mason said as she and two young children left the Capitol rally. "But most of the time, no."

Earlier Friday, Mason joined Unlock Michigan organizers to turn in what they said were 539,384 voter signatures on a petition to curtail the governor’s emergency powers. The initiative seeks to repeal a 1945 law that Whitmer has relied on to extend a state of emergency without legislative approval. GOP lawmakers have also sued Whitmer for unilateral actions.

Whitmer has called the efforts “irresponsible, dangerous and foolish” and said Friday she hopes Trump’s diagnosis will "serve as a wake-up call to every single American" about the persistent threat of the coronavirus.

McDaniel’s diagnosis set off brief panic in Michigan, where local GOP officials were caught off guard by the news. A week earlier, McDaniel had joined the Michigan Republican Party and Trump Victory on multiple stops of a statewide bus tour.

Footage from a Sept. 22 stop in Oakland County showed McDaniel exiting the pink Team Trump bus with MIchigan GOP Chair Laura Cox and activist Meshawn Maddock, none of whom wore masks as they moved toward a crowd of supporters. MSNBC aired footage of McDaniel speaking to Republicans at a Macomb County rally on Sept. 23.

The @TeamTrumpOnTour Bus is in MICHIGAN today!

While McDaniel tested positive Wednesday, Michigan GOP spokesperson Tony Zammit said he had just learned about the diagnosis Friday morning. Asked if Cox or others who came into contact with Romney last week would seek testing, he said the state party was still “digesting” the news and trying to figure out what to do next.

But within two hours, Zammit said the Michigan GOP had learned that McDaniel tested negative for COVID-19 after the bus tour, prior to her subsequent positive test, so the party was not taking any immediate steps to alert activists who joined her on last week’s bus tour.

"Our understanding is that she tested negative after that," Zammit said. "As of now, we know no one who has displayed any symptoms. Obviously if anyone was to, we would encourage them to get tested, but we believe the transmission happened after" the bus tour.

Cox, who succeeded McDaniel as Michigan GOP chair in 2017, has been tested "multiple times throughout the campaign cycle," Zammit said. "Whenever we have any sort of contact with the presidential campaign, there is usually a test."

McDaniel was reportedly with Trump last Friday, but she has been at her Michigan home since Saturday, according to RNC spokesperson Michael Joyce, who said she sought testing after another member of her family had tested positive.

Wayne Bradley, former director of minority engagement for the Michigan Republican Party, said he was part of a group that met with McDaniel last week at a GOP office in Detroit.

"Out of precaution, I'll probably go get tested," he said Friday. "I feel fine, but obviously it's concerning. I know multiple people who have actually passed from the coronavirus, so I take it very seriously."

Bradley hosts a radio show in Detroit, which was hit hard early in the pandemic but has had daily case counts drop significantly since spring. He said he hopes the president's diagnosis will encourage others to take the virus seriously as well.

"That would be my message to a lot of my friends on the right side that have probably not taken it as seriously as they probably should at times," Bradley said. "Hopefully, we can continue to be diligent on it and do basic things like wear your mask and wash your hands."

Maddock, an advisory board member for the national Women for Trump group, told Bridge she'll ask her doctor if she thinks she should be tested but noted it's been 10 days since she was with McDaniel in Oakland County.

"Feeling great and praying for our President and America’s speedy recovery!" Maddock wrote in a text message.

Linda Lee Tarver, an advisory board member to Black Voices for Trump, said she accompanied McDaniel during campaign bus stops in Lansing and Detroit last week. While she wasn’t wearing a mask, she only came in contact with the chairwoman outside the bus.

Tarver said she does intend to get tested after later that week flying to Atlanta to see Trump speak at a “Black Economic Empowerment” event, where she sat in the front row but didn’t come in direct contact with the president.

A spokesperson for Republican Senate Candidate John James said he did not join any tour stops with McDaniel last week but did not directly answer whether he may have come in contact with any Cox or other leading Republicans who may have met McDaniel in the days since.

Democratic state lawmakers on Friday renewed their calls for GOP leadership to tighten COVID-19 rules at the Michigan Capitol, calling it a workplace safety issue.

While lawmakers are encouraged to wear masks, it is optional, and there is no standardized system to screen lawmakers or alert them when a colleague tests positive.

House Speaker Lee Chatfield and Senate Majority Leader Mike Shirkey do not have the authority to make lawmakers wear masks, their spokespersons said Friday. They noted there is a mandatory mask rule for staff, and that will continue.

Multiple lawmakers told Bridge they are awaiting COVID-19 test results because of potential exposure to LaFave, who tested positive for the virus Tuesday but had interacted with colleagues in the House and in committee the prior week.

LaFave told Bridge he wore a mask on the House floor and in closed-door caucus meetings with fellow Republicans. Video of last week’s House Judiciary Committee meeting shows him entering the hearing room with a mask but, like several other members, removing the face covering for most of the roughly 30-minute hearing.

State Rep. David LaGrand, a Grand Rapids Democrat who sits on the Judiciary Committee, said he woke up Friday morning with a headache and, given his recent proximity to LaFave, called a local health clinic to request a test.

LaGrand said he learned about LaFave’s positive test in the news on Wednesday and wishes the House would establish an "open and transparent" system to notify legislators and the public.

"I was going to go see Biden today, but I'm not going to do that," he said. “I'm not putting the former vice president at risk because I potentially got exposed from being in the Legislature."

LaFave is at least the fifth Michigan lawmaker to contract COVID-19 since March, including Democratic state Rep. Issac Robinson of Detroit, who died from what his family believes were complications from the virus. At least two Senate staffers have also tested positive, according to a GOP spokesperson. The House has not responded to requests for the number of staffers or legislators who have tested positive but not been publicly announced.

Committee Chair Graham Filler, R-DeWitt, said Friday he has not experienced any symptoms since LaFave's diagnosis but did get tested "out of an abundance of safety and caution."  He has not yet received the results.

Filler told Bridge he did not alert other committee members about LaFave’s positive test because he assumed they’d heard the news, which LaFave announced on Facebook and was reported by several media outlets, including Bridge.

"I think people are adults, and they can make a decision if they're worried," he said.

Rep. Steven Johnson, a Wayland Republican who also sits on the committee, declined to say whether he has sought testing since LaFave's diagnosis. "I like to keep my medical stuff private," He said. "Obviously I would say something if it tested positive."

But Johnson made clear that he does not want a lawmaker mask mandate.

"I support letting individuals make that decision to protect themselves," he said. "I think what we're doing right now is working."

Lawmakers, like other members of the public, have families that they could bring the virus home to if exposed at work. LaGrand said he plans to quarantine and will ask his 78-year-old mother, who is immunocompromised and lives with him, to leave the House until he gets test results.

The Grand Rapids Democrat consistently wears personal protective equipment at the Capitol, including a respirator face covering and two layers of gloves. He told Bridge he also tries to avoid extended time at indoor gatherings, but that's difficult in the Legislature.

Masks should be mandatory inside the Capitol like they are at other indoor workplaces, LaGrand said. Michigan lawmakers could also do much of their work by Zoom video conferencing, he argued.

"It's patently obvious to anyone who goes in [to the Capitol] that masks come off shockingly quickly when we're inside," he said. "The basic concept of viral loading and indoor space doesn't seem to be something that we're really accounting for in any kind of response."