Emails, election results are enough for three-judge federal panel to rule that a League of Women Voters lawsuit challenging Republican redistricting maps in Michigan can go to trial

A federal lawsuit challenging Michigan’s political boundaries can proceed to trial in February, with a court concluding there is enough evidence that Republicans orchestrated a “durable partisan gerrymander” over several election cycles.

A three-judge panel on Friday dismissed a motion by lawyers for Michigan Secretary of State Ruth Johnson to toss the case. The suit was brought by the League of Women Voters and has unearthed a trove of unflattering correspondence among Republican political operatives showing how the GOP drew state and congressional political borders in 2011 to favor their incumbents and minimize Democratic victories.

“Emails that the mapmakers exchanged illustrate the profound extent to which partisan political considerations played into their redistricting efforts,” the judges wrote Friday.

They added that the “efforts proved extremely successful,” allowing Republicans to win a “majority of seats” in Congress the next three elections “despite never winning more than 50.5% of the statewide vote.”

The ruling clears the case for trial in February.

The League is asking the court to order that state and congressional district lines in Michigan be redrawn before the 2020 election. It also seeks special, mid-term elections in a handful of Senate districts it claims were unconstitutionally created, said Mark Brewer, attorney for the group.

“This is a complete victory,” Brewer said of Friday’s opinion.

The ruling comes less than a month after Michigan voters overwhelmingly approved a ballot measure to create an independent citizens a commission to draw political districts.

For decades, the party in power in Lansing –  Republicans in 2001 and 2011 – has drawn the districts to reflect population changes following the decennial Census. The independent commission approved by voters is scheduled to begin after the 2020 Census and the first election with its maps will be 2022.

The three-judge panel ruled that emails and other evidence uncovered in the lawsuit showed the “major consideration” of the 2011 redistricting was that “sitting  . . . senators or representatives . . . want to be re-elected.”

Republican leaders and consultants met in secret to craft the maps, which the judges wrote were drawn to consider “the percentage of voters who voted for the Republican candidate in the previous three governors’ races .. and the percentage of voters who voted in the last three elections for the statewide education boards, a ‘guideline’ for the partisan makeup of the districts.”

The judges also took note of often blunt and caustic emails from Republican staffers, including one former chief of staff to then-U.S. Rep. Thaddeus McCotter who bragged that proposed districts in a “a glorious way that makes it easier to cram ALL of the Dem garbage in Wayne, Washtenaw, Oakland, and Macomb counties into only four districts,” as Bridge Magazine first reported.

In other emails, a staffer for then-U.S. Rep. Candice Miller noted that a proposed district was “perfect” because it’s  “it’s giving the finger to [S]andy [L]evin,” a long-time Democratic Congressman.

The judges rejected arguments that the Democrats’ success in the November election is proof that gerrymandering doesn’t exist. The Democrats gained two seats to split the state’s congressional delegation 7-7.

“It is possible that Democrats would have won an even greater number of seats in the 2018 midterm election but for the unconstitutional gerrymander they allege,” the judges wrote.

Two of the judges on the panel, Eric Clay and Denise Page Hood, were appointed by President Bill Clinton, a Democrat. The third judge, Gordon J. Quist, was appointed by President George H.W. Bush, a Republican. He wrote a dissenting opinion, saying he agreed the plaintiffs had standing to challenge the districts but disagreed that the League of Women Voters could bring the case as a statewide issue.

Brewer, the attorney for the league, was chairman of the Michigan Democratic Party during the 2011 redistricting. Johnson is represented by  Michael Carvin, a prominent conservative who helped fight the 2000 Bush v. Gore Supreme Court case that propelled George W. Bush to the presidency.

Bridge Magazine has written extensively about gerrymandering and the lawsuit, including the role of the Michigan Chamber of Commerce in redistricting.

The judges’ order noted the role of the institute in redistricting, writing the GOP “outsourced the drawing of the Congressional Districts” to the nonprofit. 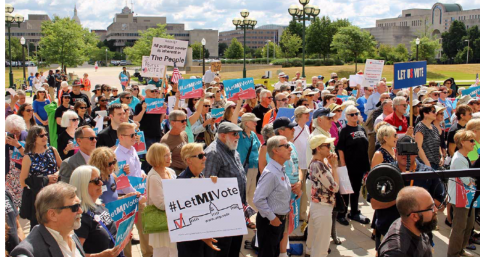 Michigan’s first redistricting commission should take shape in August, after legislative leaders strike up to 20 people from the panel. Voters in 2018 opted to form the commission after years of complaints about gerrymandering. 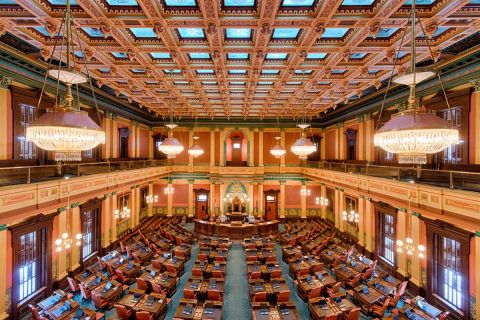 Emails involving Republican strategists and the Michigan Chamber emerge in a federal lawsuit. The messages suggest that helping GOP candidates was the central focus in redrawing legislative boundaries back in 2011. 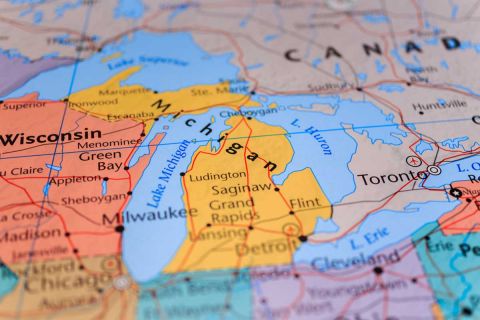 Some Republicans were ‘beyond pissed’ and ‘just hated’ proposed political districts that threatened their power, prompting wheeling and dealing to ensure favorable districts in 2011, new emails in federal gerrymandering suit claim.

So are judges now going to get into the after the fact business of deciding whether or not they approve of who won an election? Seems like a very blurred separation of powers case to me.

Ruth Johnson needs to be in federal prison for vote tempering,, I still would like to know WHY Mayor Duggan did not say one word when she destroyed 75000 ballots of Detroit voters! Giving MI to tRUMP!! How much money did Duggan get???

Gee, what a surprise: the two Democrat-appointed judges voted in favor of proceeding with the lawsuit, and the Republican-appointed judge dissented. This outcome seems to fly in the face of the recent statement by Chief Justice Roberts that there are "no...Bush judges or Clinton judges...." Of course, this came from a Justice who twisted the law into a pretzel in order to find Obamacare constitutional.

What I find hilarious about this lawsuit is that by the time anything actually happens (remember: It is very likely that the 6th District & probably SCOTUS will weigh in on this as well), the "independent" citizens commission will have already drawn new districts.

Hmmm, I cannot help but wonder what the League of Women Voters will have to say when the leanings of this "independent" commission are eventually made public?

Remember, Proposal 2 proponents specifically did not address how they would handle the commissions boundaries when their true political leanings are found out. For an allegedly well-thought out proposal, this is a curious "omission".

If they want to hold onto any shred of credibility, I highly doubt that a shrug and a public admission of "Oops!" will suffice.

Will The League of Women Voters file suit against a problem that they themselves had made?

Changing this won't favor one party over another as much as it hopefully will move legislators to vote according to their real constituents (who are generally people with a mixture of viewpoints) rather than one view and party.

The GOP
Stepping on democracy since Florida 2000!

This is about downstate politics. If the truth where know, no one north of Pontiac has a meaningful say in state government. Rural Northern Michigan is predominately Republican. God only knows why that is, but it is true. I hope whoever is appointed to the new commission isn't as stupid as the state Republicans are. Maybe they should keep their private partisan feelings to themselves and not do a victory dance chain email. WTF!!!