Michigan Gov. Gretchen Whitmer to give response to Trump’s State of the Union

Michigan Gov. Gretchen Whitmer presents a strategic choice for national Democrats going into the 2020 election season as a Midwestern leader who isn’t yet closely aligned with a Democratic presidential candidate.

Michigan Gov. Gretchen Whitmer has been chosen by national Democratic leaders to deliver the party’s official response to President Donald Trump’s State of the Union address on Feb. 4, a job often given to political leaders considered rising stars.

"Governor Whitmer's dedication to Michiganders is a model for public servants everywhere. Thanks to her tireless efforts, thousands more families across the state have access to quality health care, safer drinking water and the opportunity for a good-paying job," said Senate Democratic Leader Chuck Schumer in a statement.

House Speaker Nancy Pelosi said Whitmer is “a forward-looking leader who is laser-focused on solving problems for everyday Michiganders and is uniquely qualified to deliver Democrats’ message of progress for all Americans.”

The response to a president’s State of the Union speech comes from a member of the opposing party and is most often a member of U.S. Congress. Whitmer will be the 11th governor to deliver the address — others have included Nikki Haley of South Carolina, Tim Kaine of Virginia and Bill Clinton of Arkansas.

In addition to responding to Trump’s message, it’s an opportunity for Whitmer to highlight her initiatives in Michigan, spokeswoman Tiffany Brown told Bridge Magazine. “That would be the issues that we focus on: From cleaning up drinking water to improving education and skills training to fixing the roads. It’s a great opportunity to showcase the important work that’s already happening here.”

Whitmer was among a record-breaking number of women, mostly Democrats, who won election to statewide and congressional offices across the country in 2018. She decisively won in a state that went to Trump two years before, which many strategists have attributed to her focus on “kitchen table” issues such as roads, health care and drinking water — and argue may have modeled a potential path for Democrats hoping to win over states like Michigan and Wisconsin in 2020.

Whitmer represents a strategic choice for national Democrats going into the 2020 election season, said Matt Grossmann, director of the Institute for Public Policy and Social Research at Michigan State University. She’s from the Midwest, a crucial swing region, and is not yet closely affiliated with any one Democratic presidential candidate.

The address is a big opportunity for ascendant politicians, but it is also “historically a mixed bag,” Grossmann said.

“It allows someone to gain stature and notoriety in the party nationally, but there have been high profile examples like Bobby Jindal (the then-governor of Louisiana), where the speech is not well-received and sort of retards the progress of the rise of the person giving it,” Grossmann said. “It’s a speech that it’s hard to please everyone.”

Brown acknowledged it’s a high-profile platform, but Whitmer is “solid in the work that she’s doing here and it’s a great opportunity to talk about that.” 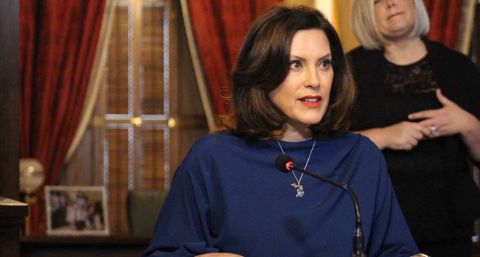 Democratic Gov. Gretchen Whitmer is asking Michigan’s Republican-led Legislature to extend her emergency authority by 70 days amid the deadly coronavirus pandemic. The House is developing a plan to hold a session next week without violating social distancing guidelines. 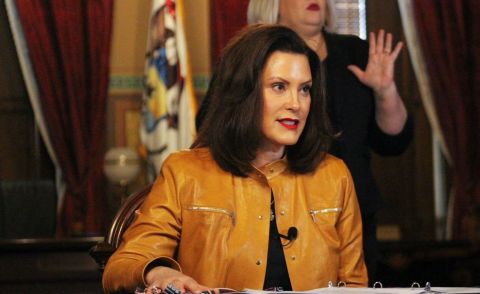 Michigan’s governor wants to identify residents who have recovered from the coronavirus to help plan when to reopen the economy. The state also will begin publishing recovery data, as Whitmer comes under scrutiny over transparency.

Gretchen you’re a real piece of work! Over paid for doing nothing for Michigan!

Governor Whitmer is underpaid for trying to stop all the GOP malfeasance.

I'm sure that this is a great honor for our beloved governor. But why would there possibly be a response to the state of the union address? The address is required under the constitution, an annual report by the president to the congress. Any response to it, by the opposing party., is nothing other than partisan political babbling. It certainly is not worthy of receiving the coverage that our news media gives it.

SOMEONE has to correct the record after all the lies we will be told by BLOTUS.

Yes because she's the perfect example of what to expect from them. Big tax increases and symbolic non-solutions, (Auto insurance reform). And whipping up catastrophes, and then proposing solutions they don't even like.

This current governor if you want to call her that I didn't vote for her because she was a socialist all the way. She said she was going to fix everything and the only thing she does is raise taxes and cut things that are good for this state that promotes good stuff in Michigan. Higher taxes means less industry after mr. Trump has brought back all this industrial stuff to the United States she's pouring money and you are needed an unnecessary things. Gas went up and she's planning on raising it again with her little facts and calling in an intelligent move. She has no intelligence she's about a bare minimum in the brain Department. Once you can only raise taxes and call that a fix she is the problem. She needs to be removed from office before she's since this state back into what it was couple decades ago. Industrial was leaving Michigan because of her kind of thinking. And as far as Chuck Schumer and Pelosi anyone take that seriously of them talking about how good our governor is here in the state of Michigan. Where are they some Simple Minds in the Democratic Party. Socialist simple-minded lack of constitutional spine. She's pure socialist socialism is communism folks USSR stands for United socialist states of Russia it's ran by Communist Party out of Israel that's right, nism was created by Peter the Great one of the greatest Jewish Scholars. So now you can figure out who's running Russia and their communist socialist government it's not Russians. And the Russian people aren't communist or socialist they're living under communist socialist rule. Keep allowing the Socialist to become any kind of a government Authority in this country and you'll be living the same way they do in Russia there's the poor and then there's the rich there's no in between peasants and the overbearing communist rule

Are you on drugs?

As a socialist, it's amazing to see just how well the brainwashing worked on the Boomers. Everything you said was false, and topped off with a weird dash of anti-Semitism that's uncomfortably reminiscent of Nazi propaganda. I'd stake $5 that you've recently complained about today's youth not understanding civics, despite being wildly ignorant about even the basics of economic and governmental theory

WE THE PEOPLE OF MICHIGAN
Don't care to hear the BULLYSHIT and LIES that come from this womans mouth.

So proud of our governor

This Governor has a Socialist agenda. This country does not need Socialism. We need to keep Strong Leaders Such as Donald J Trump.

She and her communist cronies want total control of our lives. She is using the coronovirus for political gain and power. Evil!