Michigan governments sit on $11B from stimulus, as needs grow every day

Michigan Government
Michigan governments sit on $11B from stimulus, as needs grow every day

There’s no shortage of ideas on how to spend a $30.5 million windfall of federal stimulus and COVID-19 recovery funds in Battle Creek, a working-class Michigan city where nearly 1 in 4 residents live in poverty.

Calling it a unique opportunity to shape the city's future, officials have already identified more than $160 million in potential projects they believe could help Battle Creek emerge from the pandemic stronger than when it began.

And the list grew Wednesday evening during a public meeting at Washington Heights United Methodist Church, where residents offered their own ideas to eliminate “food deserts,” convert vacant school buildings to affordable housing and clear blighted buildings for urban farms.

“We won’t be able to do everything,” City Manager Rebecca Fleury acknowledged after the meeting. “This is really a once-in-a-generation opportunity. But what we have to remember is it’s a one-time opportunity, so we don’t want to create a community that we can’t sustain.”

Despite clear needs in a city with a $50 million annual operating budget, Battle Creek officials have so far allocated only a small fraction of the American Rescue Plan Act recovery money the federal government began doling out in May.

And they are not alone: Michigan local governments qualified for more than $4.4 billion in total funding, but many are taking a wait-and-see approach as the state government decides how to spend its own federal stimulus and Democratic President Joe Biden pushes for another massive infrastructure bill.

Seven months after Congress approved the American Rescue Plan Act to spur recovery from the COVID-19 pandemic, pressure is building on Democratic Gov. Gretchen Whitmer and Michigan’s Republican-led Legislature to break the bottleneck by deciding how to spend the state’s remaining $5.8 billion share.

"Timeliness is of the utmost importance," Steve Currie, executive director of the Michigan Association of Counties, which is part of a coalition of local government and business groups urging state action. “We don't necessarily want to have this money sitting in bank accounts not being used.”

As of late August, Michigan's nine largest counties reported spending a collective $28 million out of the more than $1 billion they qualified for, according to public documentation required under the stimulus law.

The state, meanwhile, has spent or committed less than $800,000 of its $6.5 billion in federal stimulus recovery funds, including $160 million for pandemic grants to hospitals and $121 million to expand free preschool access.

Local governments won’t risk losing any unspent funds until the end of 2024, so some patience may be appropriate, said Chris Hackbarth, director of state and federal affairs for the Michigan Municipal League.

"You don't want to commit your funds without knowing where else some support might come for that exact same project," he said.

But that uncertainty has left local officials in an awkward position as they are slow to spend COVID recovery funds despite an influx of cash.

“I’m hoping that we can take enough time to talk to the community, see what they want and wait on the state to see if some of that money trickles down to us,”  Battle Creek Commissioner Boonikka Herring told Bridge Michigan. 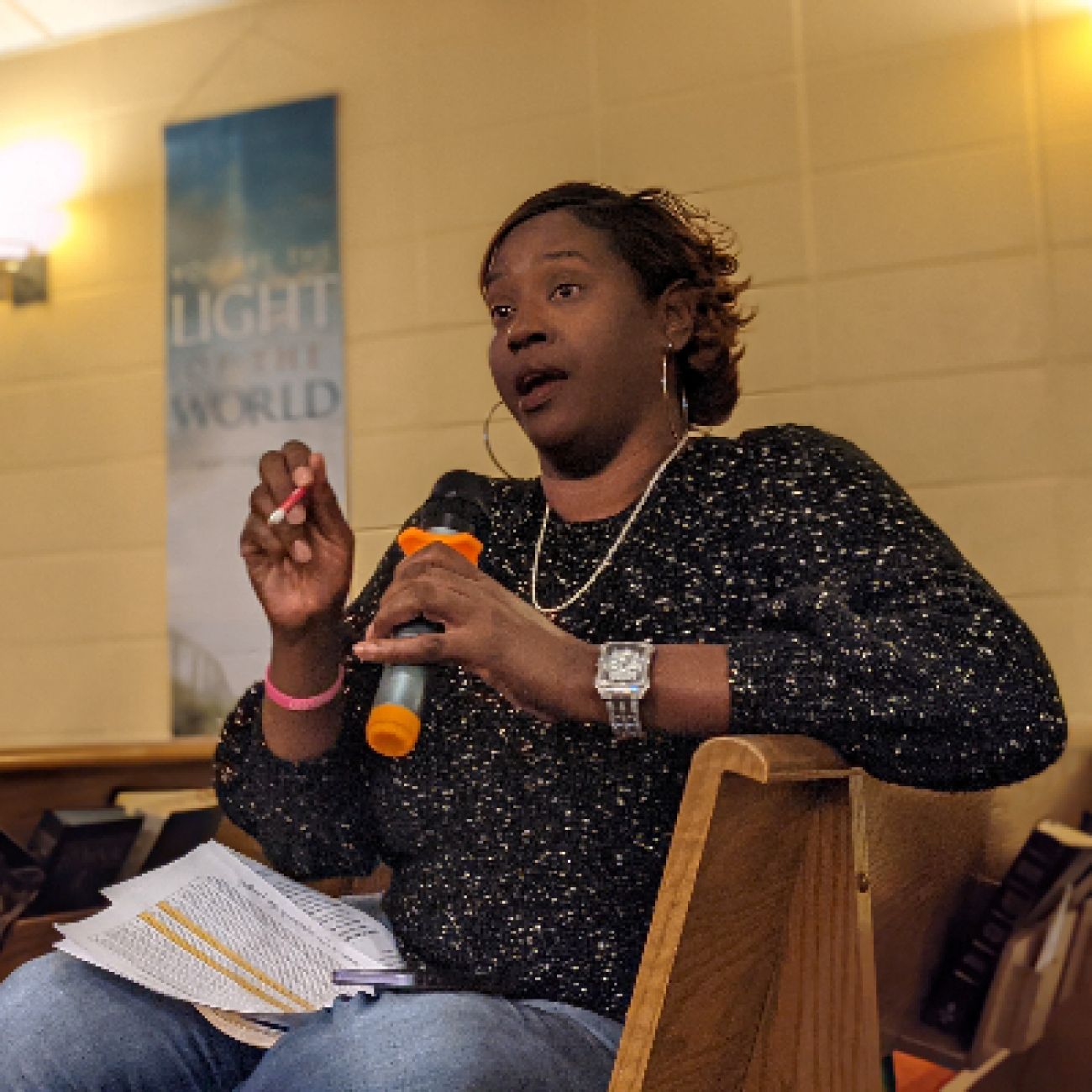 “I would love to see some of the state money used for these necessities, so we can come in and put more into the community.”

The Battle Creek Commission last week approved an initial $4 million plan to help renovate a shuttered downtown hotel, buy a building to redevelop as affordable housing and build communal kitchens at long-stay motels where an estimated 200 to 300 residents are living to avoid homelessness.

The shared kitchens will be a “quick fix” to help residents living in motels, but Battle Creek should use its remaining stimulus money to expand housing options and address the underlying causes of poverty, said Boonikka, the city commissioner, who also works as a tutor.

“I have students that are living in those motels, and I want to improve those conditions.” 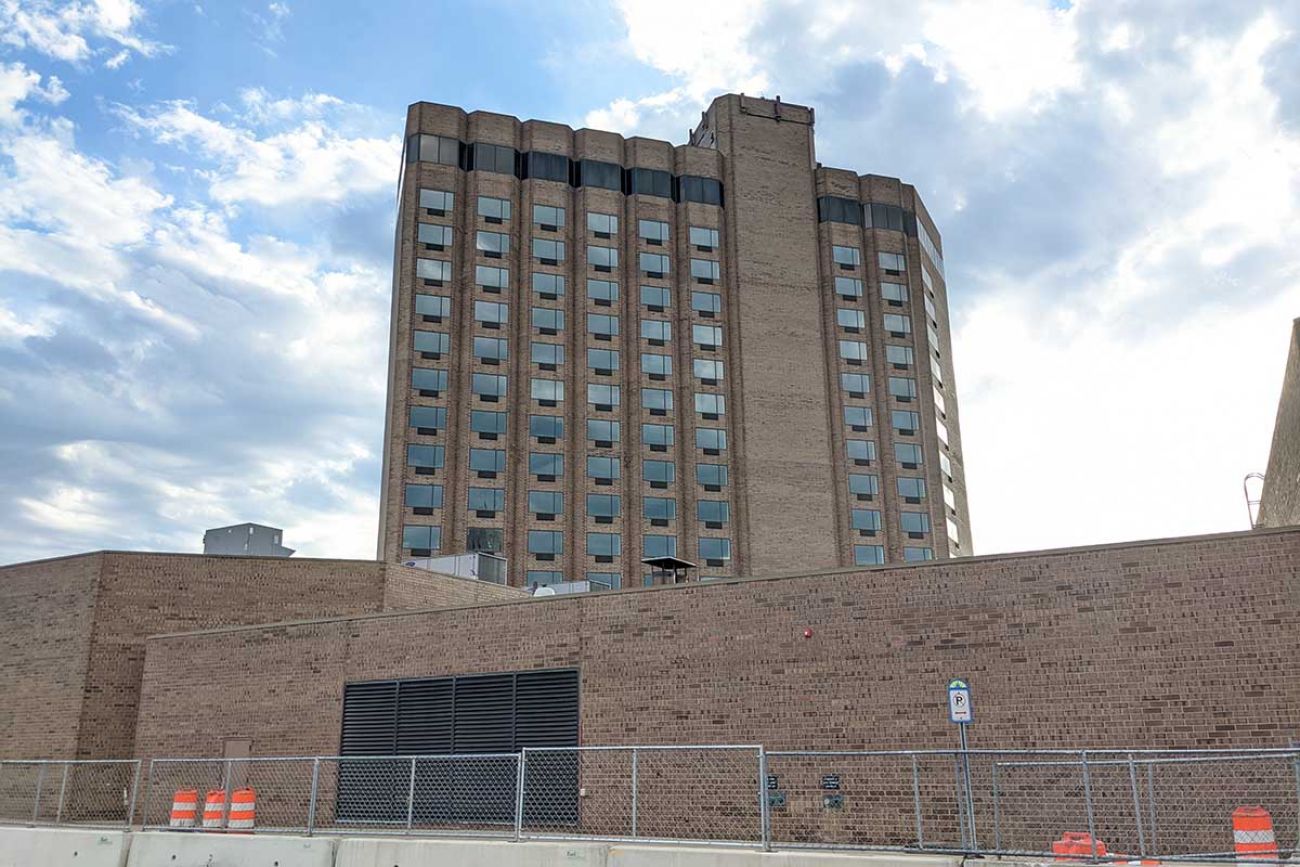 Battle Creek will use $2.5 million in federal stimulus funds to help renovate and reopen the shuttered McCamly Plaza Hotel, a $60 million project officials say is key to the city’s downtown event and tourism industry. (Bridge photo by Jonathan Oosting)

In Flint, another former manufacturing hub still recovering from a drinking water contamination crisis, Mayor Sheldon Neeley has developed a list of potential spending categories for the city’s $95 million in recovery funds, including demolition of blighted buildings and housing vouchers for residents.

But his administration has not finalized any spending plan and continues to seek public comment through local meetings, an online survey and by mail.

Frustrated by the slow pace, Flint Councilman Eric Mays last week proposed jumpstarting the process by sending a $125 check to every city resident.

But his push stalled as Council President Kate Fields stressed patience, arguing the city cannot fully "leverage" its federal funding without knowing how the state and Genesee County will spend their stimulus.

It'd be like "spending $100 on a new suit and then finding out I haven't paid my water bill," Fields told Mays during one of several contentious exchanges.

The slow spending pace by local officials is generally driven by a desire to maximize impact amid uncertainty over future funding streams, according to Eric Scorsone, director of the Michigan State University Extension Center for Local Government Finance and Policy.

But it may be a mistake to wait too long, he told Bridge.

“You just have to move forward, because my guess is the state's going to take a long time to decide," said Scorsone, a former state treasury official advising local officials on best practices for their American Rescue Plan Act funding.

Whitmer and the GOP-led Legislature have been slow to negotiate the state’s $6.5 billion stimulus award, but the Senate last week began debating a $2.5 billion plan to pay for water, dam and sewer system upgrades.

But Republicans have not yet negotiated details with Whitmer, and Stamas said legislators are facing the same kind of uncertainty as locals: Biden and Congress are debating spending plans that may fund similar infrastructure projects.

“That’s the challenge of moving too quickly before we actually know what the full gambit of the funds available are,” Stamas said.

Whitmer and legislators this summer negotiated a $70 billion annual budget, which the governor called evidence that "divided government doesn't have to be dysfunctional government.”

But the ink on that deal had barely dried when Whitmer angered key Republicans by reinstating a pro-union construction worker wage policy the Legislature had repealed in 2018.

"If the governor is truly interested in finding agreement on how to invest the billions of dollars available to the state, I suggest she end the theatrics,” House Appropriations Chairman Thomas Albert, R-Lowell, said in a statement.

A coalition of local government and business groups this month offered their own $6 billion plan for how the state could spend its stimulus funds, including money for water and broadband infrastructure, affordable housing, business assistance programs, workforce training initiatives and more.

Whitmer, too, has proposed a series of stimulus spending plans, including a $1.4 billion to expand low-cost or no-cost child care, $200 million to replace lead service lines, $150 million for park upgrades and $32 million for law enforcement.

But Scorsone noted that 2022 will be an election year, which can prove a barrier to bipartisanship in Lansing, where the incumbent governor is a Democrat but Republicans control both the House and Senate.

"Hopefully we don't do too much (spending) duplication, but locals are frustrated,” Scorsone said. “They're like, ‘We got to move. We need to do something, because it's affecting people right now.’”

Because of their populations, Michigan’s nine largest counties were required to submit their first spending reports to the federal government at the end of August.

Detroit, the state's largest city, identified 15 priority spending areas for its $826 million stimulus. But as of July 31, Detroit reported it had not yet spent any funds, and officials have since faced protests over their draft plan.

The federal government delayed reporting requirements for other local governments until March 2022. Some smaller cities, villages and townships only received the first half of their funding this month, and many will qualify for $500,000 or less, said Hackbarth, with the Michigan Municipal League.

As of last spring, most local officials said they intended to use stimulus funds on infrastructure, business relief and city services, according to a statewide survey by University of Michigan researchers that is set to be released this week.

But that's not allowed under the federal stimulus law, which aims to fund major recovery projects. Neither are tax cuts. Or government debt payments.

Developing ambitious one-time spending plans is a new front for many local officials in Michigan, who are more accustomed to cutting budgets in the face of sluggish state revenue sharing payments and property tax policies that have slowed the state's recovery from the Great Recession.

"Most local communities didn't have a wish list of transformational investments they would like to make, because it wasn't an option."

Across the state, “group wait" has delayed the spending more than expected, but "I think that's appropriate" as officials explore ways to collaborate with the state and local partners, Coulter told Bridge.

"I've been in elected office now for 20 years, and I've never seen an opportunity to invest this magnitude of funds before, and I don't expect to again," he said.

Oakland is ahead of the curve when it comes to spending and developing future plans for its $244 million in federal stimulus funding.

Commissioners have approved more than $22 million in spending to address what Coulter called "acute needs" related to the pandemic, including $2 million in legal aid for residents facing eviction, $2.5 million in business recovery grants and $10 million for a mental health and wellbeing nonprofit grant program.

And with the help of a task force, Coulter has also created a framework for longer-term recovery spending that he said focuses on "chronic needs" beyond the pandemic. His administration has also surveyed local governments to determine ways they might work together.

But like other local officials, Coulter said he is eager to see how the state decides to spend its stimulus funds "so that we don't duplicate those things."

"What the state does is going to be a big piece of this," Coulter said. "For me, personally, I thought maybe they would have been a little further along."