LANSING — A Michigan lawmaker who has questioned mask efficacy and criticized Gov. Gretchen Whitmer’s response to the pandemic has contracted COVID-19 as the virus surges through his Upper Peninsula district.

Republican state Rep. Beau LaFave said Tuesday he is self-quarantining at his home in Iron Mountain, watching cable television and feeling “much better” after weekend symptoms including sweats, fatigue and muscle aches.

“It felt to me like a sinus infection,” he told Bridge Michigan.

LaFave is at least the fifth state lawmaker confirmed or suspected to have contracted COVID-19 since March, when Democratic Rep. Isaac Robinson of Detroit died of what his family believed were complications from the virus.

Fellow Detroit Democratic Reps. Tyrone Carter and Karen Whitsett have recovered after testing positive for COVID-19 early in the pandemic, as has state Sen. Tom Barrett, R-Charlotte, who tested positive in early August.

Additionally, at least two Senate staffers have tested for COVID in recent weeks, but they “did not have contact with other senators or staff” and quarantined “the required amount of time,” said spokesperson Amber McCann. A House spokesperson did not immediately disclose any additional cases among staff or members. 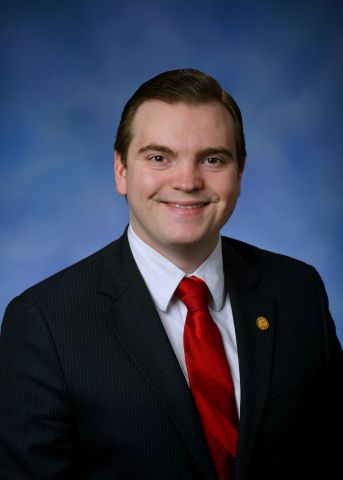 LaFave is a critic of Whitmer, who was visiting the Upper Peninsula on Tuesday to urge mask wearing as a means to slow the spread there.

LaFave said Tuesday he does not support any new restrictions on local businesses or residents.

“I think the people of the Upper Peninsula are incredibly intelligent, smart, kind people, and they are very capable of making decisions on their own,” he told Bridge.

LaFave in July defended his decision not to regularly wear a mask in public or in the Legislature but said he was avoiding his parents and grandparents to protect them from potential exposure.

As a 28-year-old, “If I get it, I’ll be fine,” LaFave told a panel of reporters on WKAR-TV, noting that COVID tends to be more deadly among older residents while arguing that most everyone would eventually catch the virus.

“The masks aren’t going to save anybody,” he said. “It doesn’t make any sense.”

But last week, with signs the virus was spreading in the U.P., LaFave told Bridge he took the “utmost caution” while working in Lansing, where the House met multiple times to pass a state budget and other legislation.

“I wore my mask all week on the floor as well as in caucus, and just generally avoided others,” he said. “I had a sneaking suspicion that cases were on the rise in my district, and the cases were getting closer to me.”

House Speaker Lee Chatfield, R-Levering, wished LaFave a “speedy recovery” and said in a statement that his team is “working with the House Business Office to make sure anyone who may have been in contact with him is informed.”

Echoing President Donald Trump’s unproven claim, LaFave has accused China of “knowingly” unleashing the virus that was first detected there. He recently introduced legislation that would require the state of Michigan to invoice the Chinese government for any pandemic-related costs.

While he’s been critical of Whitmer’s policies, LaFave wrote on Facebook on Tuesday that he “never said this virus is a hoax.”

Since Sept. 1 the number of confirmed coronavirus cases in five western Upper Peninsula counties, including Dickinson, where LaFave lives, have tripled from 517 to 1,575. Deaths have risen from seven to 15.

With just over 130,000, the five counties have experienced the highest average daily case rates per 100,000 in the state — and some of the highest rates seen outside of metro Detroit at the height of the pandemic in April.

For September, the region has averaged 28 new cases a day for every 100,000, four times higher than the statewide rate of 7 new daily cases per 100,000 over the same time frame.

Whitmer noted those “concerning” trends Tuesday as she spoke in Houghton following meetings with U.P. leaders. Wearing a mask will help slow the spread and ensure the state does not have to tighten restrictions there, the governor said.

“COVID is here, and it is a real threat,” Whitmer told reporters at a press conference. “And so the mask, which is universally adopted in a lot of parts of our state, is not I think worn here as frequently, and we want to increase that.”

Whitmer said she does not currently have any plans to change public health orders in the U.P.

Michigan has learned a lot since COVID-19 cases peaked downstate in late April, Whitmer said, and can now “be a lot more refined on how we might address it, instead of just turning back and saying the whole place goes back a phase.”

Rising case counts in the U.P. have been partially driven by outbreaks at K-12 schools and universities.

Michigan Technological University in Houghton has reported 50 total cases of COVID-19, including a new outbreak linked to 8 students, and this week closed down its campus to in-person learning until Oct. 12.

Two preschools and a middle school in Escanaba reported new outbreaks this week linked to a combined 12 students.

“Fortunately those are not the demographics that are hit hardest by this terrible disease,” LaFave said.