Michigan Government
Michigan may see ‘mild’ recession in 2023, but it also has a $9.2B surplus

LANSING — Michigan could see a slowdown in economic growth in the coming years, as state economists projected Friday a “mild recession” may be on the horizon nationally.

But the state estimates it will have a combined $9.2 billion in surplus by the end of this fiscal year — including a $1.2 billion more in tax revenue than previously expected — to buttress the impact of an economic slowdown, State Budget Office Director Chris Harkins told reporters Friday.

Economists and legislative fiscal agencies presented their economic outlook for Michigan at the biannual Consensus Revenue Estimating Conference on Friday at the state Capitol. The conference provides guidance to Democratic Gov. Gretchen Whitmer’s administration and lawmakers as they work toward negotiating a new budget for the next fiscal year.

A projected recession could lead to a temporary rise in the state’s unemployment rates in the coming years and hinder the state from regaining some of its lost jobs during the pandemic, economists warned.

Revenue is also expected to decrease, at least temporarily. The state could see $32.4 billion in tax revenue in Fiscal Year 2023 — a 1.9-percent decline compared to last year. But estimates from the Friday conference show the revenue could slowly and steadily bounce back throughout fiscal 2025.

Officials estimated Friday the state collected about $33 billion in tax revenue for Fiscal Year 2022 — a $1.5 billion increase from an earlier estimate in May. The unexpected increase could trigger a 2015 state law, which requires an automatic personal income tax cut when there is excess revenue, according to reports from the nonpartisan Senate and House fiscal agencies.

Here are some takeaways from the Friday conference:

What’s the economic outlook for Michigan?

Over the next three years, the state’s economy will likely face a short-term setback and recover slowly but steadily, economists estimated.

The state will likely see a temporary spike in unemployment rate in the next three years, rising from the 4.3-percent estimate for year 2022 to 4.7 percent in 2023 and 4.8 in 2024, according to the Friday projection. It is estimated to then be reduced to 4.5 percent in 2025.

The estimate could hinder the state’s recovery efforts, as the state lags behind the nation in regaining lost jobs during the pandemic, said Gabriel Ehrlich, economist at the University of Michigan. 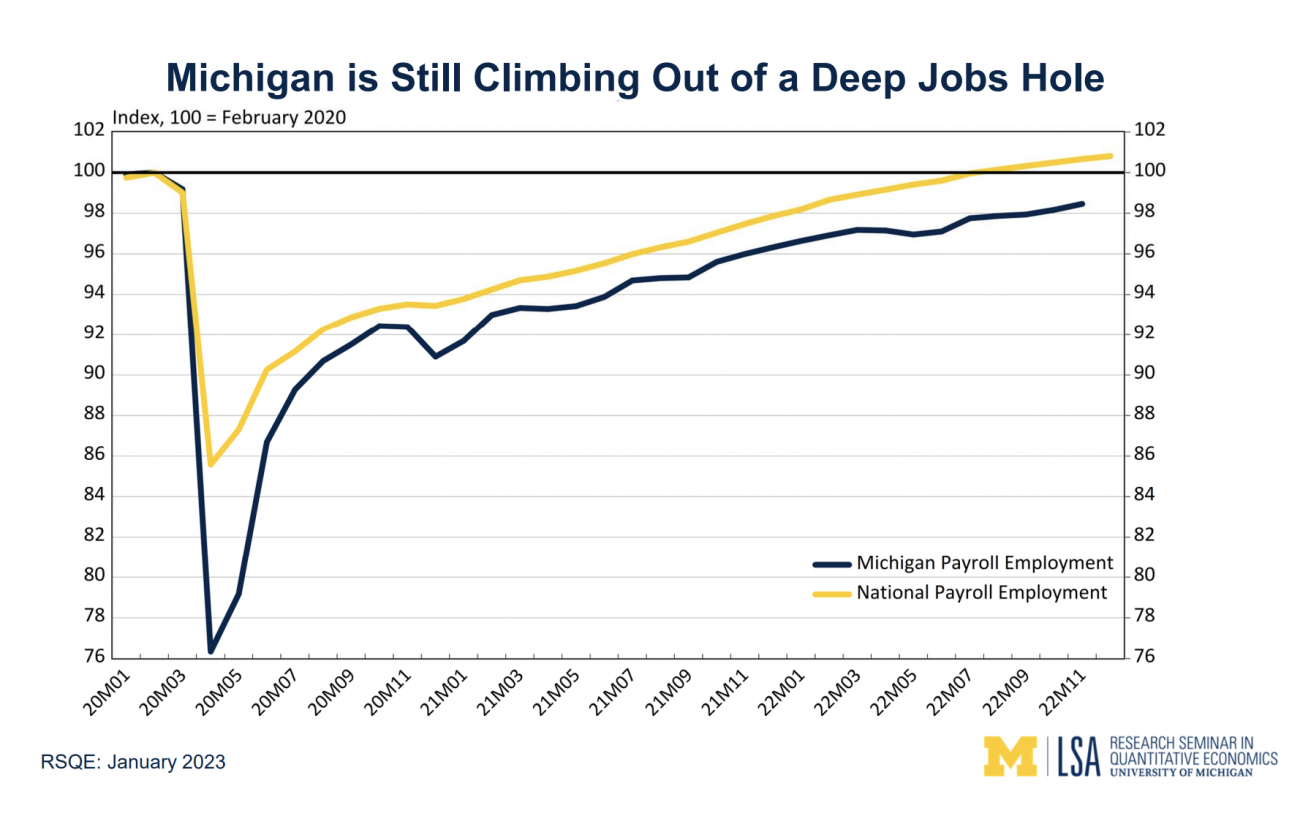 While the U.S. lost roughly 14 percent of its payroll jobs at the beginning of the pandemic, Michigan lost 24 percent, representing a “much deeper initial downturn,” he noted. And while the U.S. fully recovered overall job losses by last summer, Michigan regained roughly 93 percent of the losses through November, Ehrlich said.

“We were climbing out of a much deeper hole than the nation.”

The housing market has cooled down and home prices have dropped, but the changes won’t be “dramatic,” according to Daniil Manaenkov, another economist with the University of Michigan.

“We project the home price inflation to stay below overall inflation, so marginally, we are going to see some better affordability,” he said Friday.

How bad could a recession be?

Whatever Michigan is facing in the near future won’t be as impactful as the Great Recession between 2007 and 2009, said David Zin, chief economist at the Senate Fiscal Agency.

That is partly due to the abundance of “backorders” in goods and services and the money consumers have saved in the bank, Zin said Friday.

“That’s just not going to happen,” he added.

But “many people feel like we are in a recession” already, Ehrlich said.

“Real disposable income per capita jumped by about 8.3 percent in 2020 … because of the federal income support,” he said. “Unfortunately, inflation has basically erased all of those gains at this point.”

Under a 2015 state law, sponsored and backed by Republicans, if the state tax revenue in any given year exceeds the capped amount that year, the state must offset the excess amount by reducing the income tax rate.

Based on the preliminary estimate of the Fiscal Year 2022 revenue, the state might have to reduce the state’s current 4.25-percent income tax to 4.05 percent, according to the House Fiscal Agency.

That would result in a reduction in state general fund revenue of roughly $660 million a year, The Detroit Free Press reported.

It’s unclear if the cut will happen. State Treasurer Rachel Eubanks told reporters Friday state officials must rely on the actual revenue for Fiscal Year 2022, which is not available yet.

“At May’s conference, we should know more about this topic and we simply don’t know what’s going to happen because the books are not closed yet,” she said.

Republicans on Friday applauded the 2015 law and said the potential reduction in income tax would provide relief to Michigan families.

“Fiscally conservative leadership in the Legislature over the previous years has resulted in a fiscally sound state budget,” Senate Appropriations Minority Vice-Chair Jon Bumstead, R-North Muskegon, said in a statement. “And, thankfully, this forward thinking will soon provide Michiganders with much needed tax relief.”

Senate Appropriations Chair Sarah Anthony, D-Lansing, told reporters Friday she is not sure how the potential income tax cut could affect the state’s future budget.

“For now, we know that it’s there, we know we have to address it,” she said. “This won’t be something we do in isolation. We will be working closely with our Republican colleagues to make sure we get something out there that’s responsible.”