Six years after a switch in drinking water sources changed her life in ways she is still discovering, the Flint mother of three took time off work Wednesday to travel to Lansing for Michigan Supreme Court arguments in a class-action lawsuit she and other residents filed against the state in early 2016.

Later that day, Mays planned to return to her job as a social worker in Flint, where she still sees the effects of the water contamination crisis on her neighbors.

“I’m tired because it’s been 2,140 days of the Flint water crisis, since day one, and it’s been almost five years since we’ve been fighting for an actual remedy,” Mays, 41, told Bridge Magazine after the hearing.

“I’m irritated that the fact [attorneys for Michigan are] still saying that basically we should have known sooner … even though all their tests were saying everything was fine.”

The case is among a series of class-action suits working their way through the courts. It is the suit that seeks monetary damages from Michigan’s government, which oversaw Flint’s finances and failed to ensure proper corrosion control chemicals were added to corrosive river water that caused lead to leach from aging pipes and into the municipal supply.

Supreme Court justices heard dueling attorney arguments in an appeal by the state, which wants the case tossed. A legal defense team in Michigan Attorney General Dana Nessel’s office contends plaintiffs are trying to establish a novel constitutional right and did not file their suit soon enough to meet a legal deadline.

It will likely be months before the court renders a decision.

The lengthy legal battle has already worn on the Flint residents. Many continue to drink bottled water despite test results showing lead levels have fallen below danger levels since then-Gov. Rick Snyder’s declared a state of emergency and orchestrated the city’s return to Detroit water. 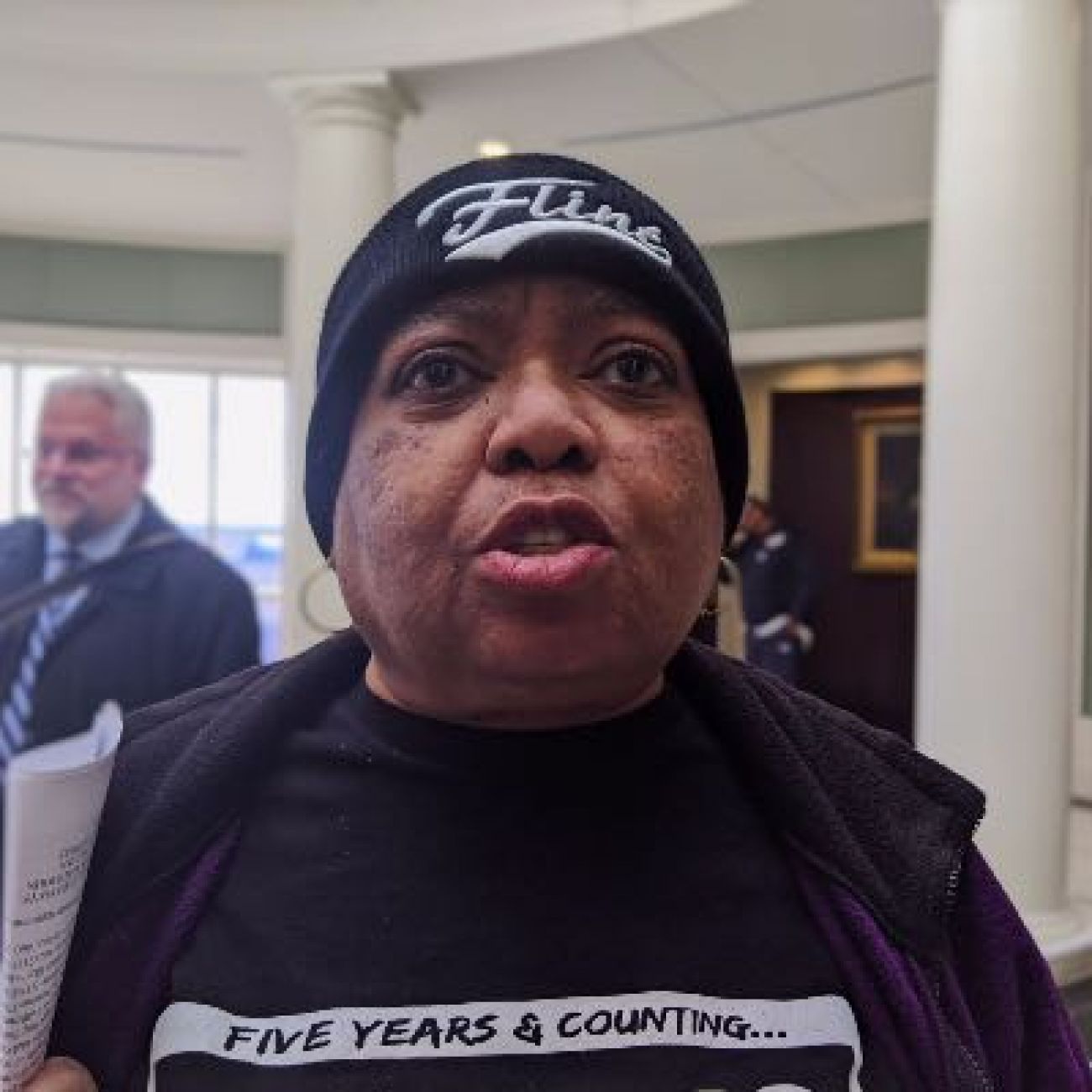 “I’m frustrated, and I’m angry,” said Claudia Perkins-Milton, 67, rolling up her right sleeve outside the courtroom to show a reporter scars on her arm she believes were caused by the water. “I hate injustice, and when the government itself is unjust, I take great issue with that.”

The lawsuit alleges that Sndyer and state agencies violated Flint residents’ due process rights by denying them the right to bodily integrity by exposing them to a dangerous substance without their consent.

That’s a principle established in federal courts, but Assistant Attorney General Nathan Gambill contended the plaintiffs want Michigan courts to “create a new remedy that does not exist” in state law.

“There has never been any kind of directive from any institution or any top policy maker...that directed the plaintiffs be exposed to toxic water,” he said. “That has not happened.”

An attorney for the plaintiffs, Julie Hurwitz, countered state officials not only made decisions that led to the lead contamination, they also “covered it up” by initially discrediting independent research by Dr. Mona Hannah-Attisha and Virginia Tech University environmental engineer Marc Edwards.

“If we cannot hold this state accountable for its role in perpetrating and continuing an ongoing invasion of poison in our communities, then I would suggest the constitution would not be worth the paper that it’s written on,” she said, prompting applause from Flint residents in the gallery.

The state also maintains Flint residents did not sue soon enough under Michigan law, which generally requires residents to give notice of a possible lawsuit within six months of an alleged “harm.”

That requirement is designed to inform the government “that its coffers, its Treasury is in some jeopardy because there will be a claim against the state,” Justice Stephen Markman reminded attorneys.

Mays and other plaintiffs sued in January 2016, but Gambill argued that any harm done to them began “accruing” on April 25, 2014, the day the city began using the Flint River as its main source of drinking water while awaiting construction of a new regional pipeline.

He noted early complaints from Flint residents about the taste, color and odor of the water, suggesting they should have worked with an attorney and filed notice at that time.

He noted that state and local government officials had initially assured residents the water was safe to drink.

“Lead is tasteless, colorless and odorless,” Novak told justices. “Somehow [the state] is making this factual inference that because the water was discolored and smelled bad that all the citizens of Flint should have known that lead was an issue.”

Emergency managers appointed by Snyder to run the cash-strapped city should be dropped from the suit because it was filed more than six months after they left office, Flint assistant city attorney William Kim told the court.

Darnell Early worked as Flint’s emergency manager from October 2013 to January 2015, and Gerald Ambrose succeeded him through April 2015. But Flint residents started complaining about water quality issues as early as the spring of 2014, Kim said.

"At a certain point when you come before the court, you kind of have to make sense," Berstein said.

"You're basically in a situation where you were telling people there was no problem, and now you're saying that because people listened to you, they should be held accountable for the fact they didn't act because they were listening to you."

Bernstein is one of three judges on the state’s highest court nominated for the ballot by the Michigan Democratic Party and then elected by statewide voters. The court leans conservative, but Justice Beth Clement recused herself from the Flint case because she served as chief legal counsel to Snyder before she appointed him to the bench, leaving three other GOP nominees.

Markman, first appointed to the court by Republican former Gov. John Engler in 1999, spent considerable time questioning attorneys about the plaintiffs’ claim of a right to bodily integrity, a right he said he’s “never heard of” despite more than two decades on the bench.

Bernstein questioned why Nessel’s office chose to appeal the case after the Michigan Court of Appeals sided with the plaintiffs in early 2018, rejecting a state attempt to block the case.

A separate legal team within Nessel’s office — on the other side of a so-called firewall — is considering whether to prosecute any state officials are dropping charges filed by former Attorney General Bill Schuette.

“The lower courts made it quite clear that the residents of Flint and the people that are here today deserve their day in court,” Bernstein said. “That’s all we’re here to determine.”

Mays and her husband, two of the six named as plaintiffs in the suit, were initially unaware their water was contaminated and used it for drinking, cooking, bathing and more, according to court filings.

They and their kids suffered “serious physical and emotional injury and severe and persistent pain” as a result of their exposure to the water, including elevated lead levels, skin lesions, hair loss and neurological symptoms, attorneys said in legal briefs.

“I didn’t do this to myself,” Mays said Wednesday after the hearing, noting the cost of medical and educational support she wants to ensure her children have access to.

“The only reason I handed the glass of water to my sons is because the state told me it was safe.”