LANSING— The Michigan Senate will update its sexual harassment policy to protect visitors and strengthen reporting protocols, following calls to change the culture in Lansing.

The new policy, obtained by Bridge Michigan, is the result of recommendations made by a bipartisan task force led by Sen. Lana Theis, R-Brighton, and Sen. Stephanie Chang, D-Detroit.

Chang told Bridge Michigan the recommendations were “aimed at trying to improve policy and training and communications procedures and address power dynamics.”

“I feel very good about that that our recommendations are bipartisan, and that there's consensus behind them,” Chang said.

The policy is expected to go into effect Monday.

The Senate’s new policy extends protections to visitors, such as constituents, lobbyists, vendors, contractors, reporters and anyone that is on or within Senate property.

That makes senators or staffers subject to disciplinary action if visitors are harassed and file complaints with the Senate Business Office.

“It may not completely solve everything, but I think the goal is to obviously make improvements and to get us further towards a goal,” Chang said. “Ultimately, you can’t completely change a culture from policy, but we hope that it'll be much improved.”

The new policy also spells out the process to report discrimination or sexual harassment. The Senate Business Office has created a flowchart to explain all the steps, which includes a complaint investigation by the director of the office.

Senate Majority Leader Mike Shirkey, R-Clarklake, created the task force in January, in response to a request by Chang. It came after former Sen. Peter Lucido, R-Shelby Township, reportedly told Michigan Advance reporter Allison Donahue she could “have a lot of fun” with a group of schoolboys visiting the Michigan Capitol.

Two other women, including Sen. Mallory McMorrow, D-Royal Oak, also filed complaints against Lucido. A Senate investigation found all of them credible.

Shirkey approved all of the recommendations presented by the task force, although some of them were amended.

In a statement, Shirkey said the policy will help build a better culture in the Legislature.

“The bipartisan workgroup led by Sens. Chang and Theis pit in a tremendous amount of time and effort to lead the way to build a better, more positive and healthier workplace culture in and around the Michigan Senate,” Shirkey said. “I am extremely grateful for their contributions.”

The updated policy coincides with multiple reports about women experiencing harassment and mistreatment by lawmakers and political consultants in Lansing. Many have claimed they have been prevented from advancing their political careers.

Bucholz, the president of Vanguard Public Affairs, denied some allegations, couldn’t recall others, and apologized to those he had offended with his comments.

This week, MLive published an article in which women detailed experiences that ranged from explicit conversations in the workplace to requests for threesomes to making a mental list of men to avoid if they were to be found by themselves with them in an elevator.

“Combatting sexual harassment and toxic workplace cultures require clear expectations and standards by which behavior and comments can be evaluated to re-establish what is and is not appropriate behavior,” Battiste said.

“The new policy is the exact type of resource that will make it easier for people – both in and outside of the Senate – to document their concerns, compare them to the policy, and feel empowered to move forward in a way that supports accountability and their own healing.”

Batiste said she left the Senate because of a hostile environment. She said the next step for the Senate's to make the policy public on the website.

The Michigan House, meanwhile, has not updated its harassment policy since 2018. 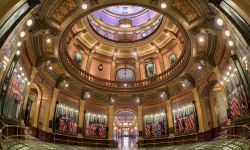