LANSING — Women in and around the Michigan Legislature are taking on what they call an “old boys’ club” culture at the state Capitol that has allowed sexually inappropriate behavior to persist despite a national #MeToo movement.

And state Sen. Peter Lucido, a Shelby Township Republican who chairs two powerful committees and has openly expressed an interest in running for governor in 2022, is in the middle of the firestorm.

State Sen. Mallory McMorrow, D-Royal Oak, on Tuesday filed a sexual harassment complaint against Lucido, alleging he placed his hand on her lower back, scanned her body with his eyes and commented on her looks during an orientation session two days after they both won election in November 2018.

“He shook my hand, put a hand on the low of my back, grazing my hip and upper rear, and held it there,” McMorrow told reporters. “He asked who I had run against. I said I beat my opponent. And his response was, ‘I could see why.’” 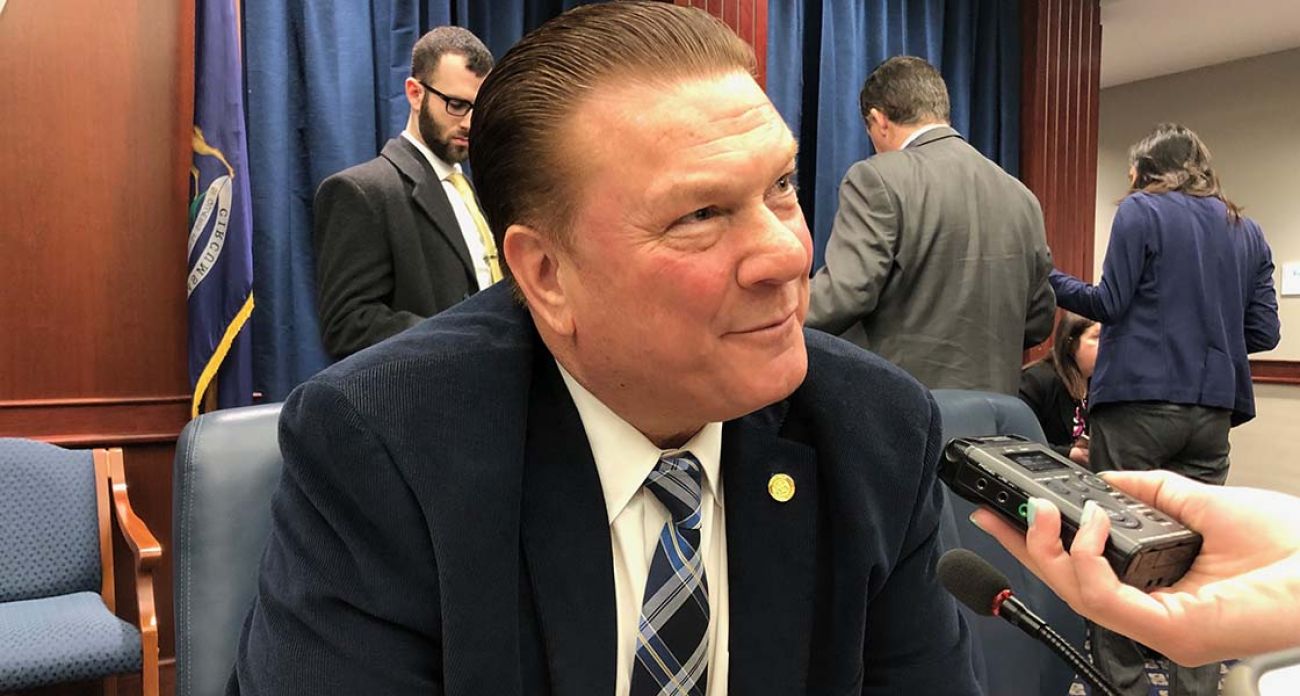 In a text message to a Bridge Magazine reporter, Lucido “categorically” denied the allegation.

McMorrow, a 33-year-old lawmaker, said her orientation experience with Lucido was “deflating” and made her feel like “meat,” but she did not go public until this week in a Crain’s Detroit interview.

McMorrow said she was inspired to tell her story after reading last week’s first-person account by 22-year-old Michigan Advance journalist Allison Donahue, who was trying to interview Lucido last week when he reportedly told her she could “have a lot of fun” with a group of schoolboys visiting the Michigan Capitol.

“Or they could have a lot of fun with you,” the 59-year-old lawmaker told Donahue, according to an account she published on the progressive political news site. The post  made national news and has prompted several current and former legislative staffers to describe similar experiences in Lansing.

“I felt a little bit of responsibility for not having said something sooner,” McMorrow said Tuesday. “I made the calculus for my own reasons and for my career, and it just made me think… how many other women make the same calculus and don’t say something.”

But a second lawmaker, Democratic Sen. Rosemary Bayer of Beverly Hills, said she saw Lucido put his hand on McMorrow’s back during the November 2018 orientation. And McMorrow’s husband confirmed to Crain’s that she told him about it at the time.

“I couldn’t tell how far down [his hand] went,” Bayer told Bridge Magazine. “I wasn’t looking for problems in that way. But it did occur to me when all of this happened that I should have gone over there and rescued her.”

The daylong Senate orientation included sexual harassment training, and Bayer also accused Lucido of “behaving badly” during that session. He started “strutting around the room” during the harassment training and suggested the culture in Lansing is “just the way it is” and wasn’t going to change any time soon, she recalled.

Bayer said she hopes the complaints against Lucido will be a “wake-up” call at the Michigan Capitol.

“There’s still that old boys' club feel, and it’s time to change it,” she said. “I’m really in awe of both Allison and Mallory for speaking out like that, because it is so hard when you’re young… and facing potential damage to your career.”

Donahue’s post last week prompted several other women to speak out about their experiences at the male-dominated Michigan Capitol.

“Sen. Lucido’s comments to [Donahue] are a prime example of the sexism and harassment my female colleagues and I face on a daily basis,” state Rep. Laurie Pohutsky, D-Livonia, wrote on Twitter.  “It isn’t a joke and it isn’t funny. It’s toxic. I applaud Allison for having the courage to call out his indefensible comments.”

Emily Schwarzkopf, a former staffer for House Democrats who now works for the Michigan Department of Health and Human Services, posted a response thread on Twitter and said there were “multiple times when comments were made to me or about me in the same vein” as Lucido’s reported comments to Donahue.

“As a staffer, you face a choice,” Schwarzkopf wrote. “Do I tell someone about the comments made by legislators, lobbyists, & fellow staffers? At the risk of being alienated, being a snitch, or having your career stifled. No, you put your head down, do your work, & suck it up."

I’m happy this is happening. I hope it results in real action. What this whole situation highlights is how toxic the Lansing bubble is for women trying to make their way in a male-dominated environment. I was trying to hold back from commenting on this topic but I can’t... https://t.co/750d00GcMg

Worked most of the 1990s in the House. This behavior toward women has existed for a very long time. I shudder to think of all the staffers who felt they couldn’t speak up under similar circumstances.

At least two other former staffers responded to the thread with similar accounts, and Schwarzkopf told Bridge Magazine that others reached out and privately thanked her.

“I didn’t want (Donahue) to feel like her interaction was unique,” Schwarzkopf, 31, said Tuesday. “A lot of things you saw in response were like ‘no one is surprised by this’ but kind of like #MeToo hasn’t come to Lansing.”

Female staffers work in a culture where they’re warned about men they should avoid, Schwarzkopf said, noting that when she first started at the Legislature in 2013, her boss told her somebody she shouldn’t go into an elevator with alone.

“I have my own little group of girlfriends who came from the Legislature, and I think we’ve all been gathering and saying these things or sharing these things,” she said. "But I think Allison really gave people a venue to talk more openly about it, and I hope the Legislature will react accordingly.”

Molly Korn, a staffer who now works for McMorrow, wrote last week on Twitter that “the legislature is not a safe space for women, & until there are real consequences for the sexism & misogyny displayed it will continue to feel degrading to work here. Sen. Lucido should be stripped of his chairmanship. The only way to stop the abuse of power is to take it away.”

Female candidates scored major wins in Michigan’s 2018 elections, including a clean sweep at the top of the ticket by Gov. Gretchen Whitmer, Attorney General Dana Nessel and Secretary of State Jocelyn Benson. But the Legislature remains heavily male.

The Senate Business Office is expected to investigate both sexual harassment allegations against Lucido, and Shirkey plans to retain outside attorneys to assist that effort, spokeswoman Amber McCann said Tuesday.

The Michigan Legislature is not subject to public records requests under the state’s Freedom of Information Act, so while the results of the investigations will be released at a later date, details will not. Shirkey plans to wait on the outcome before deciding any potential punishments for Lucido.

“My hope is that the way we gauge how effective people are changes,” said McMorrow, who last week unsuccessfully asked the MIRS subscription news site to recind the “Senator of the Year” award it gave Lucido. “But beyond that , the specific reactions to this are really up to leadership in the Senate Business Office.”

Nationally, roughly 100 state lawmakers have resigned, been removed from office, faced discipline or been publicly accused of sexual misconduct since the beginning of 2017, according to a running tally by the Associated Press.  More than 100 pieces of legislation related to sexual harassment were introduced in 2019, according to the National Conference of State Legislatures.

McCann said she believes the Michigan Senate investigation is the first of its kind since the Business Office dismissed 2016 and 2017 gender discrimination complaints filed by two female Democratic staffers who alleged a “toxic” work environment.  One of the women later said it felt like the Senate did the “bare minimum” to avoid legal liability.

“It’s not a culture that we want to see in the Senate,” McCann said. “It is nothing the Majority Leader would support and condone, and every person should feel free to come forward if they have any issue, and make it known and it will be thoroughly reviewed.”

Legislative rules adopted last year make clear that “sexual harassment of Senators and Senate employees is prohibited and will not be tolerated” and direct the Senate Business Office to establish an enforcement policy.

“I’m glad they’re in place,” McMorrow said of the rules. “But part of the reason that I did want to talk about this publicly is because if the system as it operates was completely functional, the stories that I hear everyday from staffers and from people who work around here wouldn’t exist. I’m hoping to elevate that and change it.”