Michigan’s political maps have been done since late December, and thus far have withstood legal challenges. But the commission that created them still doesn’t have a clear path forward on winding down its work.

Although meetings are considerably shorter and far less frequent than the marathon mapping sessions the commission worked through last year, its 13 members are still getting paid. The panel recently voted to restore annual salaries to $55,755 per year apiece, reversing an earlier pay raise.

How long will they keep convening, especially as the commission initially struggled to meet a quorum of nine members to begin Thursday’s meeting?

There’s no clear expiration date in a 2018 constitutional amendment that created the panel, and commissioners say they’re still weighing options with lawyers.

"To say that there’s no consensus at the present time would be an understatement," said Commissioner Steve Lett, an independent from Interlochen who updated other commissioners on his latest discussions with the panel’s counsel Thursday.

The commission still has a few loose ends, including a final report necessitated by the state constitution and a $50,000 “lessons learned” video project authorized by the commission that will be ready next month, Executive Director Edward Woods said during the meeting.

The bipartisan panel was created after voters overwhelmingly approved a constitutional amendment in 2018, replacing a system that allowed the party in power in Lansing to redraw state legislative and congressional districts after the decennial census.

The commission’s work has so far prevailed in court, winning multiple lawsuits, but two remain active in the U.S. District Court for the Western District of Michigan: a revised complaint alleging a Voting Rights Act violation because the maps decreased the number of Black-majority state House and Senate districts and a complaint over population deviations in congressional districts. Each of Michigan’s 13 districts has a target population of 775,179 people.

What comes after those lawsuits conclude remains a question mark, however.

The constitutional amendment states that “the terms of the commissioners shall expire once the commission has completed its obligations for a census cycle but not before any judicial review of the redistricting plan is complete.” And legal challenges could pop up at any point during the next decade the maps are in effect.

Some commissioners offered possible workarounds, including Ypsilanti Democrat Dustin Witjes, who suggested the commission set a date to suspend pay and go into perpetual recess once current lawsuits are complete, meeting again if the need arises.

Juanita Curry, a Detroit Democrat, suggested researching what other states with independent commissions have done for guidance on how to move forward.

But other states’ procedures might not legally mesh with Michigan’s constitution, which is ambiguous on how the commission winds down after passing the maps, Lett said.

“Perhaps, after having gone through this process, we could probably write a better constitutional amendment, but that ain't gonna happen either,” Lett said.

The commission is facing a projected $1.15 million budget shortfall, largely due to outstanding legal bills that came up in the commission's defense of the new maps. The commission’s initial appropriation was 25 percent of the Secretary of State budget — roughly $3.1 million for this fiscal year — although the constitution states the Legislature “shall appropriate funds sufficient to compensate the commissioners and to enable the commission to carry out its functions.”

Woods, the executive director, appeared before lawmakers earlier this week to request more money, noting that more litigation is possible. Litigation over the 2010 districts, for instance, continued nearly nine years after they were drawn.

"We expect potential lawsuits, possibly after the primary election and also after the general election,” Woods said this week. “And as you know these lawsuits can continue for up until the next 10 years."

Republican lawmakers grilled Woods and commission chair MC Rothhorn, a Lansing Democrat, over the redistricting process, including the political affiliation of members who self-identified as independents despite having a history of liberal activity on social media.

Lawmakers also questioned the group’s decision to raise its pay and commission a documentary.

"There seems to be a lack of accountability," said Rep. Ann Bollin, R-Brighton Township. "This is a public body, and I do appreciate the work you did, but... it seems as though a lot of these things you had on your plate were anticipated and yet you really didn't plan for them."

Rep. Greg VanWoerkom, chair of the House Appropriation subcommittee on general government, questioned some of the commission's spending but said lawmakers will consider the new funding request. 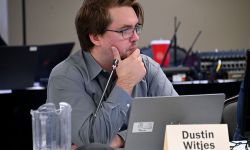