Two years ago, advocates for recreational marijuana were hustling to persuade Michiganders to approve legalization while facing opposition from leading business groups and Republicans heading up state government.

Now some of those advocates are aligned with their former detractors, at least on one thing: opposition to requiring weed businesses to enter into a “labor peace agreement” with employees before receiving a license from the state.

Labor peace agreements usually make it easier for workplaces to become unionized because the employer typically agrees not to stand in the way of employees who want to organize. However, the agreement would also require workers to pledge not to boycott or strike.

The state Marijuana Regulatory Agency proposed including the requirement in rules that will govern the burgeoning industry by July 1 at the latest. Debate over the provision was at the center of an overflowing public hearing in Lansing on Wednesday, where marijuana lawyers, business owners and workers told regulators how they’d like to see those rules changed.

Advocates for business owners argued the rule was unpopular and possibly even illegal; workers spoke passionately about how it could help foster sustainable jobs in an industry often dominated by big businesses and wealthy investors.

Cody Dekker of Kalamazoo told regulators he is a budtender — the industry’s word for front-of-house employees who serve marijuana to customers — who was fired for trying to organize his fellow workers. He said he has a chronic health condition and lost his health insurance when he lost his job.

“Currently we as workers have no representation or power as the industry booms and some people make millions of dollars,” Dekker said. “I worked hard and played by the rules. Companies should do the same thing.”

Michigan’s recreational marijuana industry has made more than $17.7 million in sales since launching in December 2019, according to data from the MRA. When the market is fully established, the nonpartisan House Fiscal Agency has estimated annual sales will be about $949 million.

Another speaker, Josey Scoggin of Benton Harbor, said she’s worked in the marijuana industry for nine years. She recently was offered a job at a dispensary in Portage for $14 per hour and had to turn it down because she wouldn’t be able to afford an apartment in the area. “I’ve never been offered a 401(k) or health insurance,” she told officials.

If the rules are approved as they are now, the agreement would require the labor organization to agree not to picket, stop work, boycott or engage in “any other economic interference with the applicant’s business.” 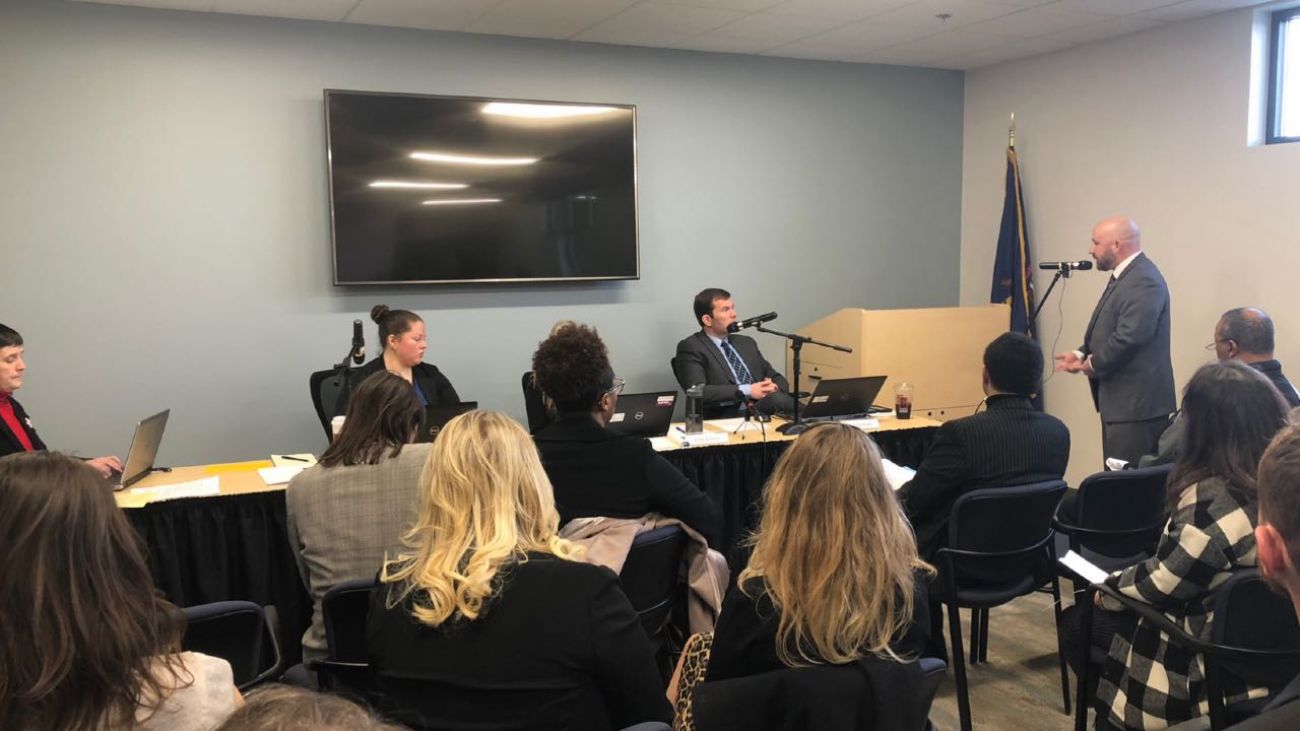 The deal basically means “that the business owner won’t stand in the way of organization by the staff at the facility, and that the labor organization wouldn’t push the labor force into a strike situation,” said Marijuana Regulatory Agency director Andrew Brisbo.

Businesses are already operating on “pretty thin profit margins,” so the provision was intended to provide “as much stability as possible” in the market, Brisbo said, heading off “labor disruptions.”

Robin Schneider, executive director for the Michigan Cannabis Industry Association, the leading group advocating for Michigan marijuana businesses, told Brisbo and his staff Wednesday that most of her members are opposed to labor peace agreements.

“We certainly did not include it in the ballot initiative language,” she said of the successful 2018 campaign that legalized recreational marijuana.

Tim Beck, a longtime marijuana advocate who helped organize the 2008 initiative to legalize medical marijuana in Michigan, said the labor provision “is crazy” and will get struck down.

“I cannot in my wildest imagination understand why you came up with a cockamamie scheme like this.”

Their voices echo those who once opposed them in the drive to legalize recreational pot. The Republican-led Legislature passed a resolution condemning the labor agreement requirement, while leading business groups like the Michigan Chamber of Commerce and Small Business Association of Michigan warned it could have devastating consequences for businesses in other industries as well.

Rich Studley, CEO of the Michigan Chamber of Commerce, told Bridge he was shocked about “the extraordinary precedent that would be set” by the rule due to the large number of businesses that must get licensure from the state in order to operate.

The provision is “at best extra-legal… and at worst it is an indirect approach to circumventing or watering down and repealing Right to Work,” Studley said, referencing a 2012 law that made it illegal for a worker to be required to join a union as a condition of employment.

“Today they’re seeking to impose this requirement on a new industry. Who’s next?”

Little is predictable in the rapidly expanding marijuana industry, and the impact of such a provision isn’t entirely clear. But other states such as New York and California have similar requirements in their marijuana rules, which analysts have described as a “double-edged sword” that can boost employee retention and labor costs.

The state will continue to accept public feedback through Feb. 17 and make changes to the proposed rules based on the testimony. The final rules must be in place by July 1.