There will be nine meetings over the next month for the public to offer its views on the latest state draft of new social studies standards.

Last year, the public influenced changes in how history will be taught in Michigan schools. Now, residents will have another chance to offer their opinions on Michigan’s controversial social studies standards, at nine evening meetings around the state and online.

A similar round of public meetings in 2018 led to a rewrite of a draft of the standards that took a notably more conservative bent. That draft cut references to climate change and gay rights, and excised “democratic” from the phrase “core democratic values.”

After an outcry, much of it at public hearings after the conservative changes were chronicled by Bridge, that draft was rewritten and presented to the State Board of Education last week.

The current draft reversed many of the changes advocated by a group of conservatives last year, which has led to complaints that the Michigan Department of Education is now favoring liberal viewpoints in the teaching of history and social studies.

You can see a side-by-side comparison of the 2018 draft and the current draft here. Do you agree with some critics the standards now skew progressive? Or did the state create a more even-handed approach to the topics required to be taught to Michigan students?

“As we did last year, we are asking for public input on this latest version of the proposed Social Studies Standards for Michigan schools,” Interim State Superintendent Sheila Alles said in a news release. “Public comments will help Michigan’s social studies experts finalize the standards that will go before the State Board of Education for consideration in June.”

Michigan residents can offer their opinions online here, or at the following meetings: 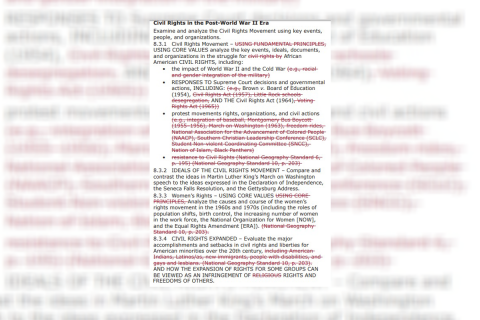 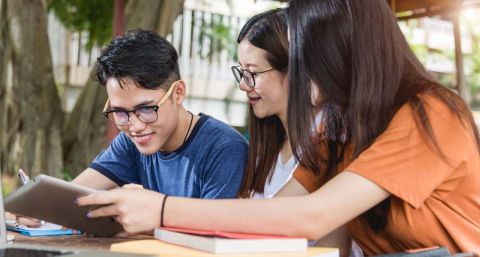 With a few last tweaks (adding the Ten Commandments and a reference to sturgeon), Michigan’s controversial social studies standards are approved by a Democratic-leaning state education board 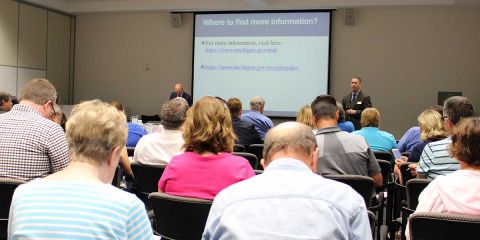 I will probably also go to the <here> , but one comment for here:

Schools should teach children how to think - not what to think! There should be no Liberal or Conservative bias to social studies! Nor any bias for or against any racial, ethnic, or gender based group.

Rather than the teacher asking: "Obamacare was a good thing, don't you agree Johnny?" it should be "Johnny, what do YOU think about Obamacare?"

NOTE: The previous sentence was not about Obamacare, so please don't go there.

So 95% agreement on the curriculum standards, then Colbeck, who has no children of his own, disagreed passionately and created this crap controversy??? Now we're listening to forums all over the state where small towns have equal weight to huge population centers?? THAT'S why Michigan has now been reduced to the status of a third world country with horrible roads, poor education, and NO JOBS. It's time to leave the Dark Ages. The majority of residents are having to comply with the dictates of climate science- and history-hating minorities. Our only hope for a better future would be to install high speed internet across the state, if we want to evolve into a first class state in the 21st century . I highly recommend watching the Bridge documentary Michigan Divided. Compare the people with internet access to those without. There's no comparison, the ones without internet are living in a completely different reality, ignorant, desperate, and without the means to make change. They're good people, but they've been left behind. They voted for Trump. So the question now is: How is that working for you???? What jobs has he and all the state Republicans brought to the UP? How's your WiFi service now, did you get broadband? Any improvements in education or the environment there? How about the toxic supersites, any of them get cleaned/funded? Well you have better roads than downstate. That's something. Roads to nowhere. Thanks GOP House, GOP Senate, GOP Governor, GOP Attorney General, GOP Secretary of State, GOP Supreme Court, and most of all thanks GOP TRUMP--Total control of the government and promises unkept. Hey, what did you have to lose? LOL

Let's clarify that any accepted Social Studies standard revisions that arose from that volunteer focus group or committee in 2018, required the approval of the majority of 21 committee members. Of those 21 members, there were five labelled and publicly criticized 'conservatives,' while the remaining 16 committee members' political ideologies, remained unknown, never publicly dissected. The MI state education organizers, who formed the committee, made every effort to assure that every minority group they could identify - per ethnic, racial, gender, sex, disability identities - had representation on that committee. The bias, or rather omission, by most public media, the MEA, and the state education organizers of these details, shows how our educational standards, specifically the MI Social Studies standards, have become politicized - targeting a minority of "conservatives" who participated within a majority of "liberals" or "leftists," per my deduction, admittedly unproven; not considered pertinent information by the proponents of the already settled Social Studies standards. The public forums were simply for show; not intended for sincere public positive criticism.